It is Athena Levesque who opens the door. 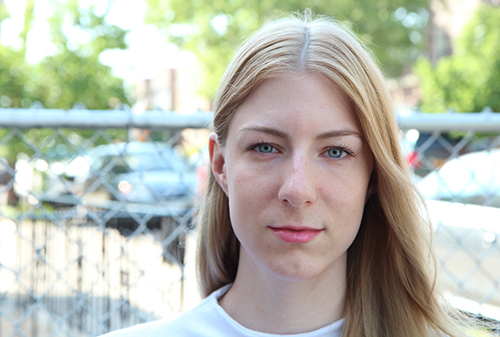 She is wearing a white long-sleeved sweater. The importance of her subtle sartorial statement will become immediately clear once you see her sisters. 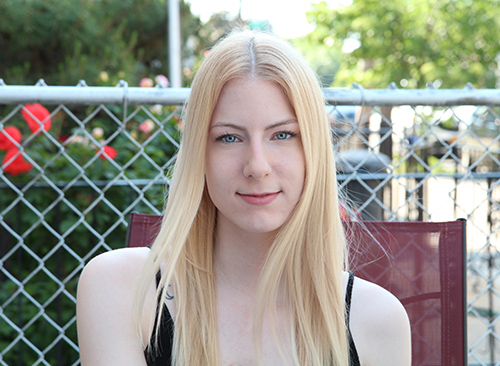 Andrea is outfitted in a black halter top. 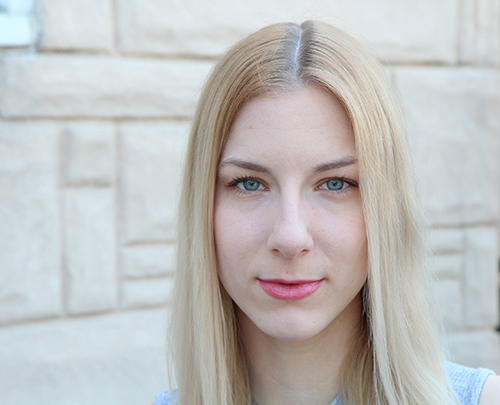 Arianna is clad in grey.

Athena, Andrea and Arianna, 5-foot-6 models who have magnetic blue eyes and long, sunshine-blond hair parted down the middle, are identical triplets.

Don’t worry if you can’t tell them apart.

When they were little, they had the same problem: They couldn’t figure out who was who until they were 4. And even now, they can’t positively identify themselves in their baby pictures. 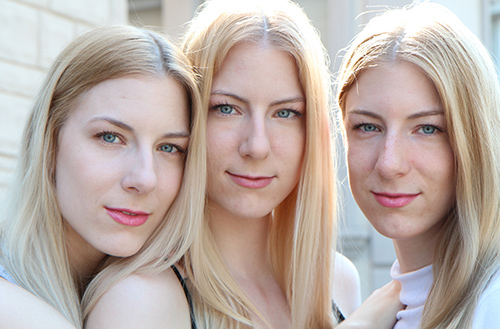 Their mother is the only person who has never made a mistake.

Their alliterative appellations – triplets with a trio of As!  — don’t make things any easier. 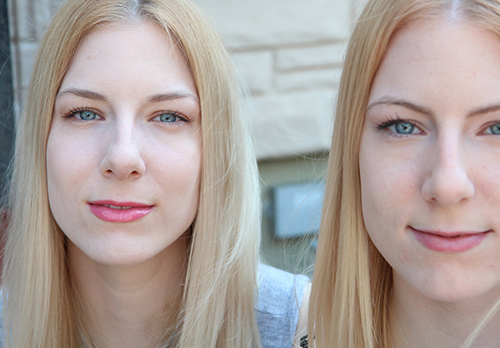 Arianna is a fashion designer.

“We know it’s a lot to process,” Andrea, of the black top, says. “And it gets even worse because my sisters often call me Ani.”

They say they are not totally alike and agree that it’s too simplistic to peg their personalities in a sound bite.

Andrea: “I’m more introverted; I prefer to be in back of the camera instead of in front of it.”

Athena: “I’m the most talkative and the least girly. I’m the funny/silly one.” 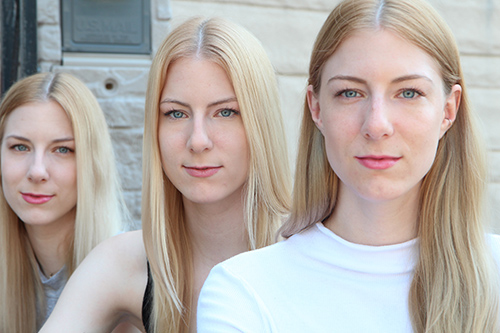 Andrea is a pet/portrait/fashion photographer.

Arianna: “I’m feminine and sweet, but I can also be loud.”

They look at each other and declare: See, we’ve very different. 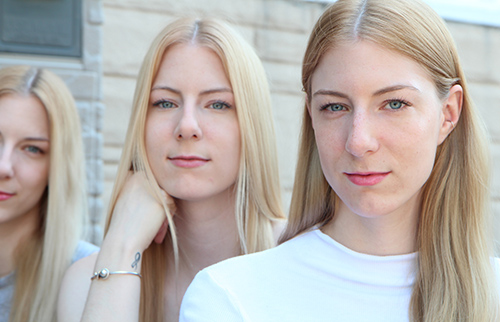 Athena acts as an extra in TV shows and movies.

When they put their heads together, which is all the time, their ideas bounce around like a baby bunny let loose in a clover field for the first time.

They don’t finish each other’s sentences, at least not all the time. They amplify each other’s ideas, or as Athena says, “We yin and yang each other because three is a lot.” 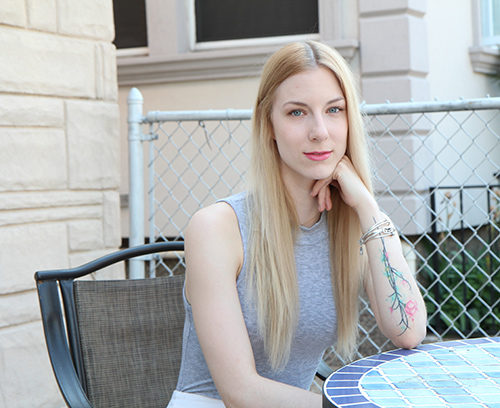 Arianna got their modeling career off the ground.

Although there was a time when the sisters strove to look different, these days, they are playing  up their sameness. It helps, they say, with their budding modeling careers.

The triplets, who share a three-bedroom apartment, were born in Boston under the sign of Taurus, the Bull. (Had they arrived a litter later, they would have been Geminis — twins and triplets.)

Technically, Athena was first, followed by Andrea then Arianna, but birth order doesn’t define them.

“Our mother had a Caesarean section,” says Andrea, “so, really we were pulled out about the same time.”

They are quick to point out that they are not the result of fertility treatments.

Andrea, Athena and Arianna, who recently celebrated their 25th birthdays, grew up in Cape Cod, Massachusetts, where they dressed the same until they were in first grade. They pretty much did everything together. 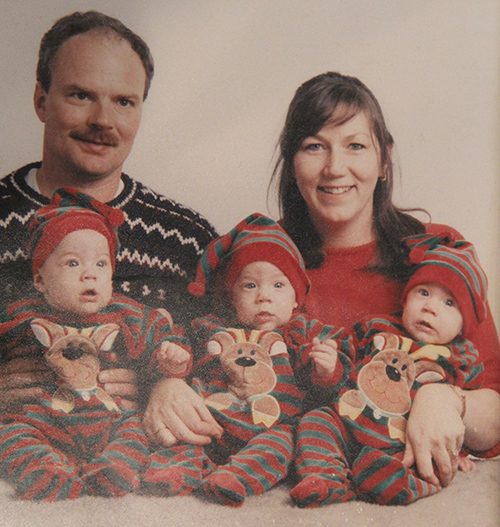 Can you tell which is which?

“Our goal was to have our own TV show,” Arianna says, adding that they tried to persuade their mother to move to Los Angeles so they could pursue this idea.

After a year at Framingham State University, they went their separate ways.

Athena graduated from the University of Massachusetts Amherst with a bachelor’s in history and a master’s in education. 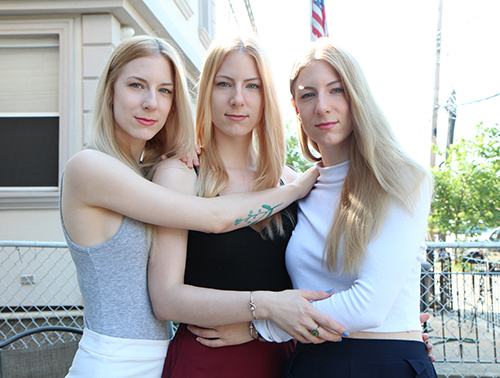 They are focusing on acting.

And Arianna moved to New York City to complete her bachelor’s degree in fashion at the Fashion Institute of Technology.

Athena: “This allowed us to figure out who we are as people. I’m not a 9-to-5 person. I was teaching history in a public school and was suffocating.”

Arianna: “I could do 9 to 5, but my main goal is to work with you guys. We had our own lives and were pretty much fine with that. But we still talked to each other every day.” 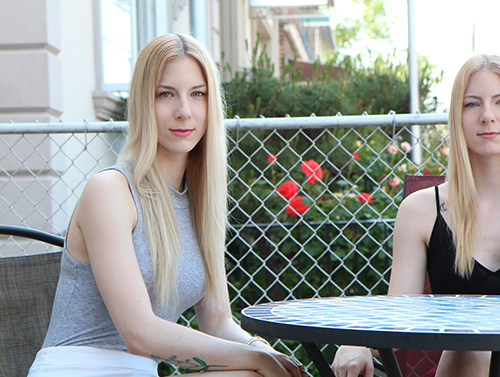 Arianna says starring in a TV show has been a lifelong dream for all three.

Andrea: “We are happiest when we are together.”

Their collaboration began when Arianna asked them to model clothing she was making for her portfolio.

Soon, Andrea and Athena were making the 12-hour round trip from Massachusetts to Manhattan nearly every weekend.

As their modeling careers took off, they moved to Astoria in 2017 and began doing a variety of creative endeavors.

Each of them has a part-time job – Arianna works for a fashion brand; Andrea is a portrait/pet/fashion photographer; and Athena performs in children’s shows and acts as an extra in TV shows and movies. 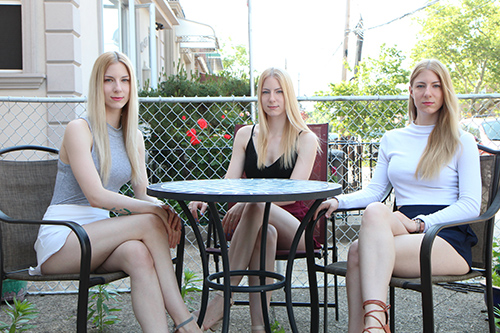 The trio will always be a sisters act.

Modeling, they say, is merely a way to make a name for themselves. Their long-term career plans walk far beyond the runway.

They have started their own brand and are moving into acting.

“Our goal is to have our own show,” Athena says. “It could be a reality show or a sitcom or even a drama. Or we could be TV personalities or influencers.”

Right now, Arianna is designing a new clothing collection. She and her sisters will model her creations.

“We’re thankful we can be a team,” Arianna says.

Andrea and Athena nod in agreement.

Astoria Characters Day: The 2nd Family Reunion is Sept. 23, 2018. A free, public event, it is sponsored by Bareburger and Salt and Bone.