As Henry Kimpel climbs the stone steps of Trinity Lutheran Church, an act he has done some 12,000 times since he joined the congregation nearly seven decades ago, he apologizes. 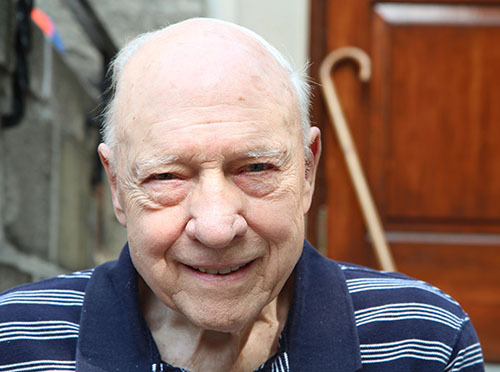 Photo by Nancy A. Ruhling
Henry has devoted his retirement to Trinity.

“I’m a slowpoke,” he says, leaning heavily on his wooden cane.

The bad thing about old age, he says, is that you get old. That goes for churches, too.

There’s nobody who knows more about the physical aches and pains of Trinity than Henry. For nearly three decades, he took care of its repairs. 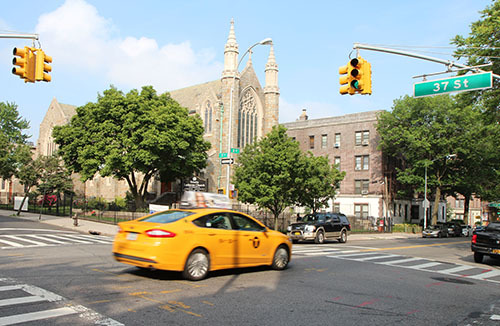 As Trinity celebrates its 125th birthday and Henry marks his 87th, he takes comfort in the fact that they have grown up and grown old together.

Trinity, which was founded in 1890 by German immigrants, held its first services at a beer garden at Steinway Street and Broadway.

Shortly afterward, the congregation erected its first church building, a wooden structure, at its current site on 37th Street at 31st Avenue. The magnificent Neo-Gothic building replaced it in 1926, only two years before Henry entered the world. (More photos.) 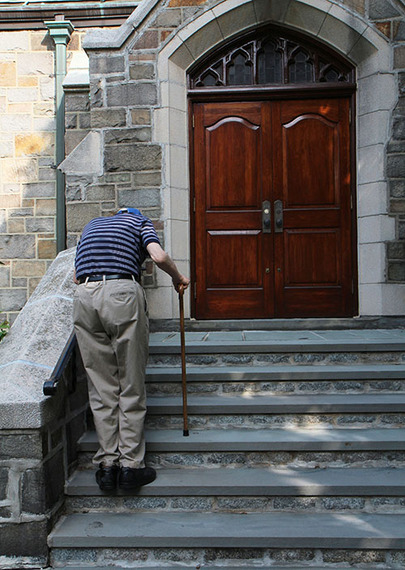 Photo by Nancy A. Ruhling
He’s ascended these steps some 12,000 times.

Henry, who was born and raised in Glendale, Queens, is a lifelong churchgoer.

Even after he enlisted in the Navy at age 17 during World War II, he attended services on the aircraft carrier whenever his schedule permitted.

He didn’t see much action during the war, and when he got out, in 1946, he studied to be an aircraft mechanic on the GI Bill and joined the Air Force Reserve in the hopes of increasing his job prospects. 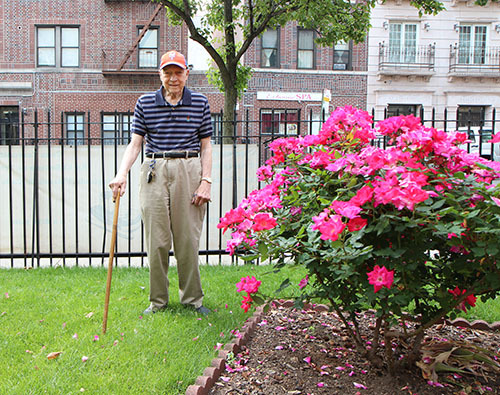 Photo by Nancy A. Ruhling
Henry’s a retired NYPD cop.

After marrying in 1948, he and his wife, Jeanne, were all set to embark upon civilian life, which included regular church attendance at Trinity, in earnest.

“We met at a skating rink in Elmhurst and moved to Astoria,” he says. “She liked sailors, and I liked pretty girls.”

They were raising a churchgoing family — they have a son and two daughters — and Henry was eagerly awaiting the results of his New York City Police Department exam. 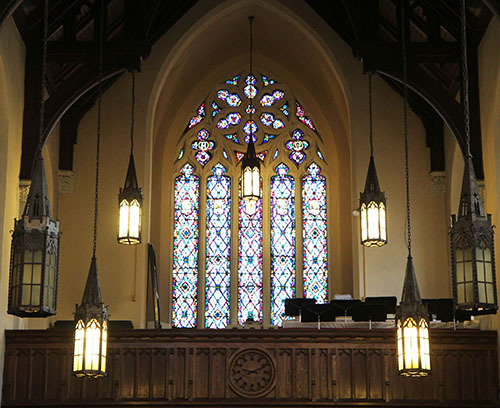 Photo by Nancy A. Ruhling
The Neo-Gothic church was erected in 1926.

But before Henry could start walking the streets as a beat cop, the Air Force called him up for the Korean War.

This time, he served as a crew chief on a B-29 bomber.

“Again, I didn’t see any combat,” he says. “I spent most of my time flying around the states, ferrying trainees.” 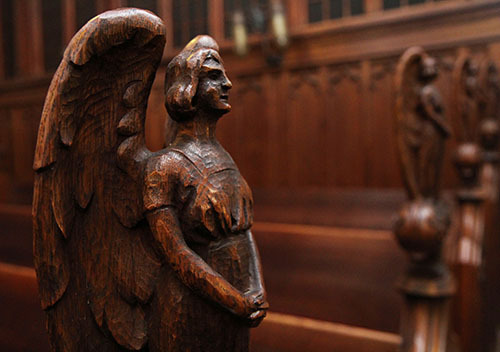 Photo by Nancy A. Ruhling
An angel on watch.

It was the same story during his nearly 30-year police career.

“I never shot anybody, and nobody ever shot me,” he says. “Was I ever in danger? Well, when I was 11, I fell out the window of a two-story building. I had seen a penny and pushed the screen out to get it. I had a head injury, but I made a full recovery.”

As for his NYPD retirement, it wasn’t planned. 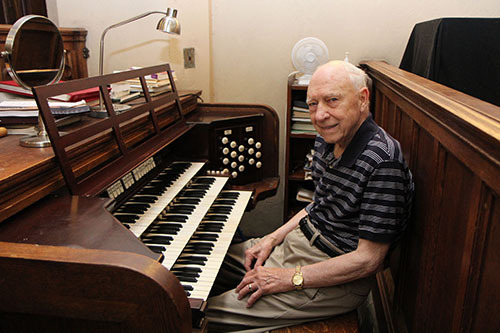 Photo by Nancy A. Ruhling
The E.M. Skinner organ has over 1,600 pipes.

“I did it after I had a slight stroke,” he says, adding that he had attained the rank of lieutenant. “Jeanne was still working, so I volunteered at Trinity every morning after I dropped her off.”

He set up a workbench in the church basement, whose chief resident is a prehistoric beast of a boiler, and set out to do the Lord’s work, whether that meant changing light bulbs in the nave, repairing broken windows at the school or doing minor hammer-and-nail carpentry at the pastor’s house. 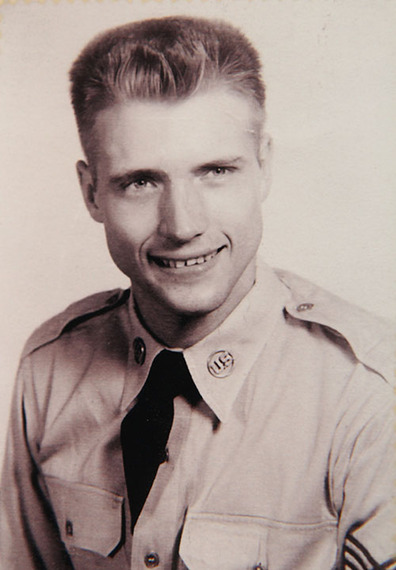 Photo by Nancy A. Ruhling
Henry served in the Navy and Air Force.

Along the way, he made other contributions to the congregation.

In honor of their 50th anniversary in 1998, he and Jeanne donated to the new-boiler fund, and when their son, Bryan, suffered a fatal heart attack in 2008, they marked his unexpected passing by financing the floodlights that illuminate Trinity’s exterior.

It was around that time that Henry had surgery for a herniated disc. 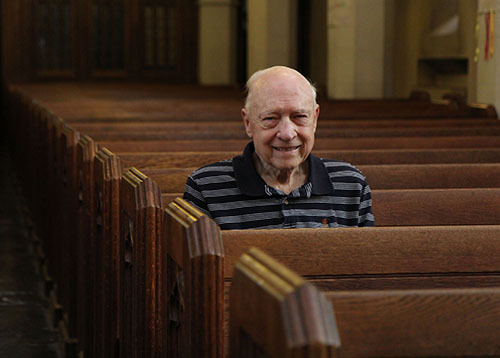 Photo by Nancy A. Ruhling
Henry in his pew, the fourth row on the left.

“The operation killed my back,” he says. “I couldn’t come back here to work after that.”

After showing off the narthex, nave and chancel, whose elaborate stained-glass windows were dedicated to the fallen of World War II the year Henry and Jeanne exchanged their vows, Henry proceeds down to his man cave.

The basement also houses a kitchen, a meeting room with a theatrical stage and a children’s playroom. 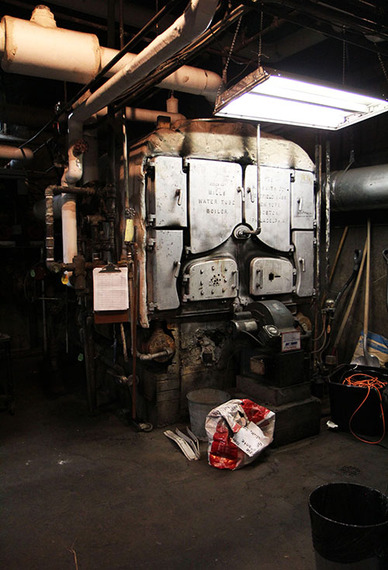 Photo by Nancy A. Ruhling
The basement’s beast of a boiler.

He points out a wall filled with color headshots of the 128 church members. Above them, on the left-hand side, there’s a larger and framed photo of an orange and white cat. That’s Mama, a stray who took up residence in the churchyard and faithfully attended outdoor services until she was adopted.

The safe room, Henry’s next stop, literally holds the history of the church.

The space, narrow as a church aisle, is dominated by a safe, an ancient apparatus that these days is the repository of nothing more than memories. 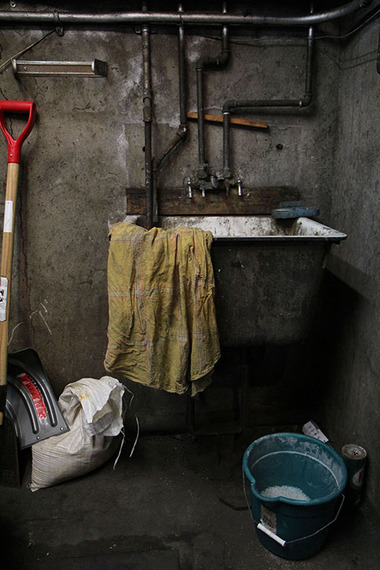 Photo by Nancy A. Ruhling
The cleaning crew’s command center.

On shelves flanking it, old leather ledgers dating from as far back as 1928, Henry’s birth year, account for the church’s financial state.

Henry, who is as small as a sparrow and bent like a C curve, doesn’t have the strength or the energy to come to Trinity every day as he used to.

But he still occupies the fourth pew on the left side every Sunday and continues to chauffeur a couple of senior church ladies to services. Occasionally, he ushers. 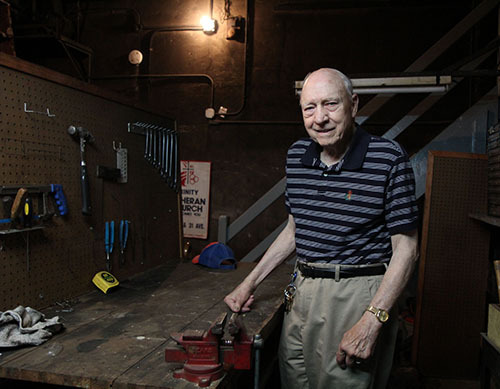 Photo by Nancy A. Ruhling
Henry at his workbench.

This doesn’t mean that he’s unoccupied. He has a lot of work to do around the house and has a full social life.

Henry and Jeanne go out to eat every day. Fridays, they take themselves to Bel Aire Diner for a hamburger deluxe and fries, which they divide, and Saturdays, they head to Joe’s Crab Shack in Elmhurst to share a shrimp dinner.

Henry’s ready to meet the maker he has religiously served whenever he is called upon to do so. 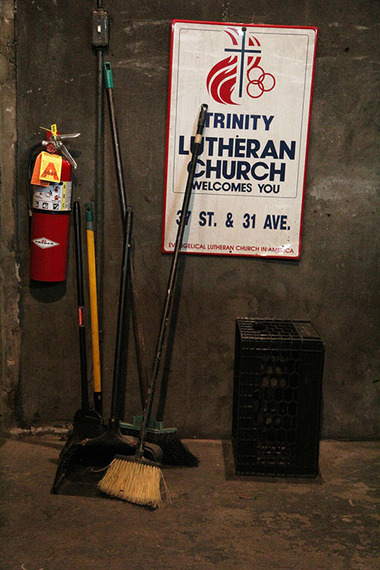 Photo by Nancy A. Ruhling
Trinity’s congregation is diverse.

“When Henry dies, everything is in order,” he says, adding that planning for perpetuity is pragmatic not morbid. “About 10 years ago, I set up a funeral file that has financial and spiritual details for Jeanne.”

The service will, of course, be at Trinity, but it won’t be anything ostentatious.

He’s picked a list of hymns. Offhand, he doesn’t recall them all, but Eternal Father, Strong To Save is at the top of the list.

Photo by Nancy A. Ruhling
Even humble objects are highly detailed.

“It’s for seafarers, which is appropriate for me because I was in the Navy,” he says. “It’s got the line, ‘Oh, hear us when we cry to Thee, for those in peril on the sea!'”

Henry has to get going. He’s a little tired and wants to take a nap before lunch.

He probably could walk up the stairs but at the rate he goes, it would take an eternity. The chair lift is convenient, so he eases himself into it. 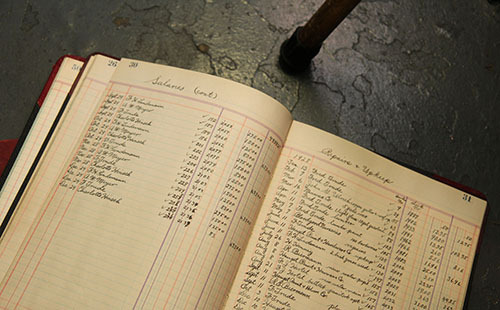 Photo by Nancy A. Ruhling
A church ledger that’s as old as Henry.

“When I installed this, I never thought I would have to use it,” he says as he ascends, secure and slow and steady.

At the top of the stairs, he pulls out his keys.

“I’ve really had a blessed life,” he says as he secures the church door.