George Kavadias follows this wake-up-and-smell-the-coffee greeting with a hale-and-hearty handshake. 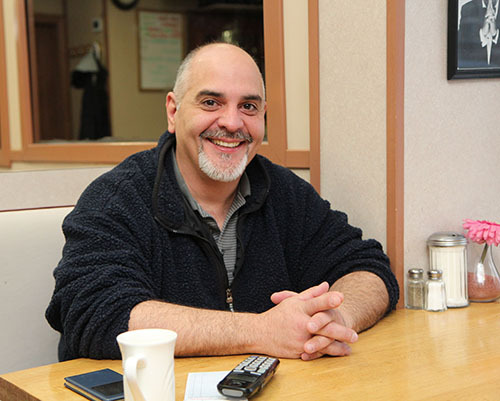 Photo by Nancy A. Ruhling
George at his command post.

He performs the same ritual when Super Dave and Kathy and all the other regulars stop in at Family Corner Restaurant.

“I try to keep my family and friends close,” George says. “And I consider my customers friends who are like family.”

Family Corner, the pint-sized coffee shop with the big-diner menu, has been on the corner of 31st Street and 21st Avenue since 1986, when George’s uncle established it. 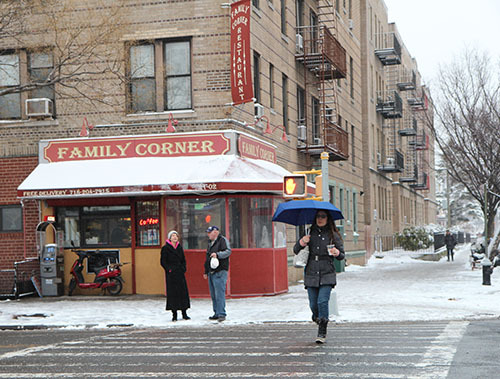 Photo by Nancy A. Ruhling
Family Corner Restaurant is on 31st Street at 21st Avenue.

Twenty years is a long time to keep doing the same thing while loving every minute of it. It sounds even longer if you call it two decades, so George sticks with 20.

During that time, George, a Mack truck whose face is framed by a grey goatee, lost his hair but never his sense of humor.

“OK, you’re right,” he tells an eavesdropping diner. “I was never thin.” 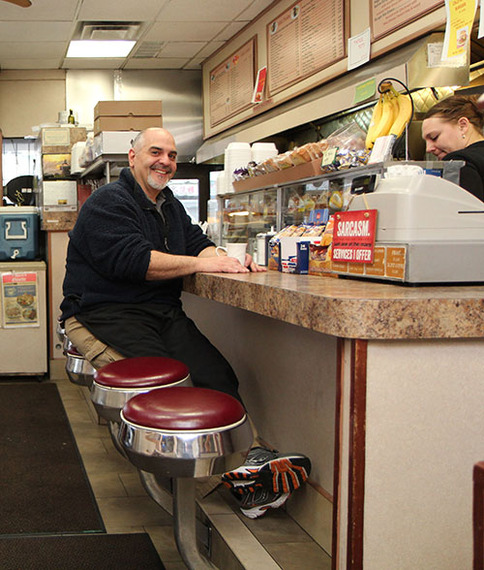 Photo by Nancy A. Ruhling
George started at Family Corner in 1994.

George — and his family — came to Family Corner almost by accident.

The Kavadiases hail from Lefkada, a Greek island on the Ionian Sea. George has no memories of it because he is the only one of the three children who was born in America. The family started out in Astoria but moved to Edison, New Jersey, when George was 2.

Success did not come to them, so when George was 6, they moved to Athens then Piraeus. When George was 11, a misguided business venture took them to Melbourne, Australia. They stayed only six months before settling in Astoria. 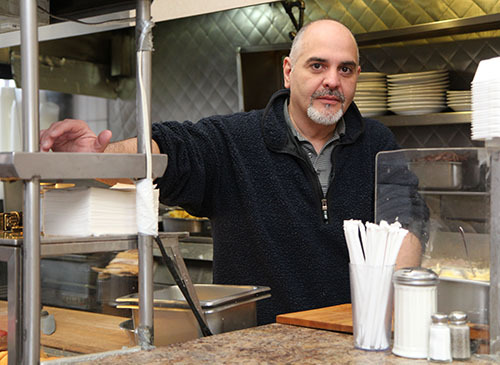 Photo by Nancy A. Ruhling
George does the day shift.

“The moves were hard for me,” George says. “I had been on three continents in the first 12 years of my life, and I lost the core of friendship.”

The constant changes made it difficult for George to decide on a career. While he was trying to figure things out, he went to TCI the College of Technology and ultimately got work in the air-conditioning/refrigeration industry.

That’s what he was doing when Family Corner came into the picture. 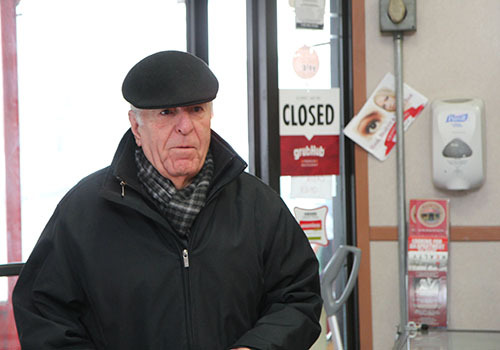 Photo by Nancy A. Ruhling
Spiro stops in every couple hours.

“I said I would help out until I found something else,” he says and laughs.

It’s lucky for him — and Family Corner — that he never did.

“I like to give people a choice,” George says. 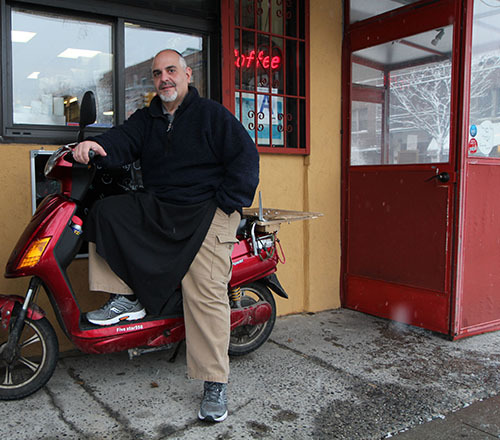 Photo by Nancy A. Ruhling
George likes to meet and greet the customers.

That’s why there’s everything from soup and Greek salad with a secret-recipe dressing to veggie burgers.

George says you have to try the sweet potato pancakes. 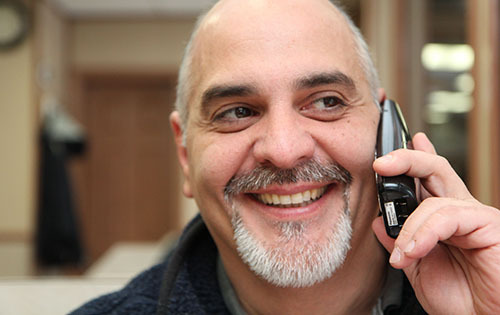 Aside from the home cooking and down-home atmosphere, George, Philip and Spiro are the main attractions.

George opens, Philip closes and 76-year-old Spiro, a widower who lives a block away, comes in when he feels like it, which usually is every couple of hours.

Right now, he’s sitting in the middle booth, aka “The Bosses’ Table,” writing out a grocery list on a couple of scraps of cardboard. 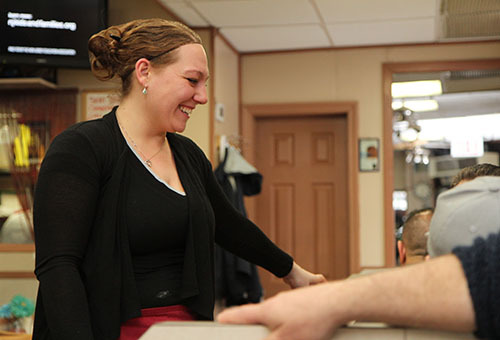 Photo by Nancy A. Ruhling
Jennifer Oramas takes an order.

Family Corner may be George’s livelihood, but it’s not his life. That, he says, belongs to his wife, Debbie, and his 14-year-old daughter, Irene.

Indeed, he chose his shift so he can be home in time to pick her up from school. He’s content to chauffeur her to the hairdresser, nail salon and play dates.

George knows that Irene will soon outgrow him, but “in my head, I’m not obsolete,” he says. 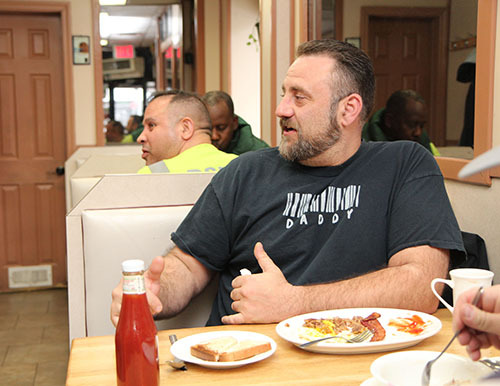 Photo by Nancy A. Ruhling
A customer shares a joke.

They live in Long Island’s Oceanside, a 40-minute one-way commute that turns into a killer three hours in traffic and bad weather.

George wouldn’t think of leaving there: Philip, as well as their sister Denise, also make their homes there. It’s good for the three families to be so close together, he says. 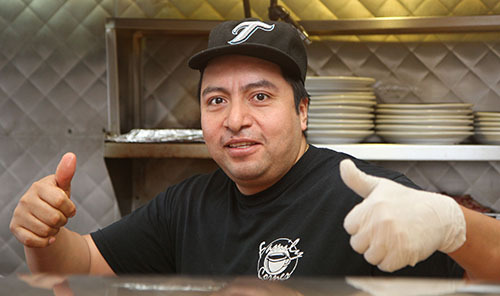 As much as George loves Family Corner, he knows that it won’t last forever.

Although Irene likes to hang out and help out, George will not hand it over to her. That thought makes him exceedingly happy.

“The restaurant business is hard,” he says. “I want her to go to college and get a job with more regular hours.” 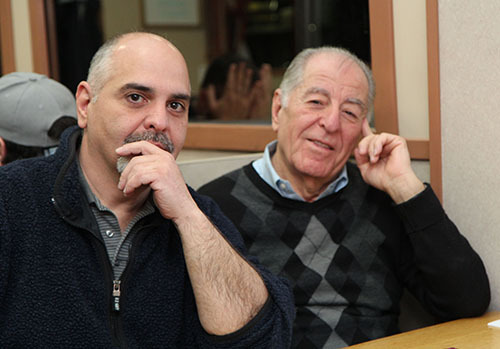 Photo by Nancy A. Ruhling
All in the family: George and Spiro.

This is not something that he has to worry about any time soon. He’s only 45.

By 9 a.m., the place is packed and George is playing director to a cast of revolving customers.

“Come in, sit down for a half hour, have breakfast or a coffee or even a milkshake,” he tells them. “And join in the conversation.”