At the front door of Gussy’s, there’s a big dude with a ponytail and tatts. 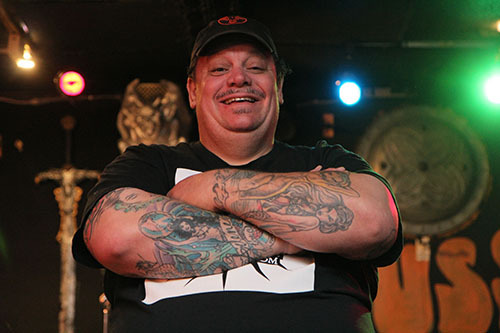 Photo by Nancy A. Ruhling
Ozzie’s the show producer at Gussy’s.

The band’s about to play, and Ozzie Paul Mortanis, whose illustrated arms are crossed over his massive chest, is so excited that he can’t stop talking.

Ozzie, a velvet bulldozer who dresses in biker black and possesses the deportment of a British butler, is the show producer for this old-time gin joint, where the drinks and the fun are good and cheap. 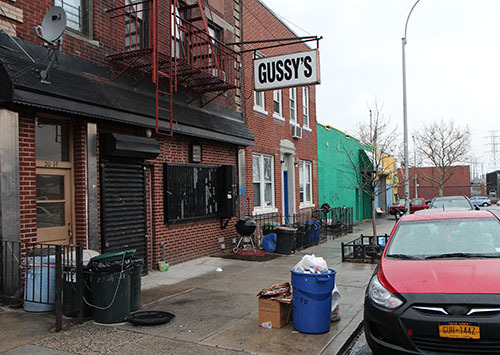 Photo by Nancy A. Ruhling
It’s a neighborhood gin joint.

Ozzie, a native of Astoria, stopped in at Gussy’s for a drink five years ago. He’s been ushering in customers every Friday and Saturday night since.

It’s surprising this didn’t happen sooner because Gussy’s stands out like an olive in a daiquiri. (More photos.)

It’s in a strait-laced red-brick Victorian building that’s stuck in the middle of a residential block that sprang up, like weeds, around it when it wasn’t looking. 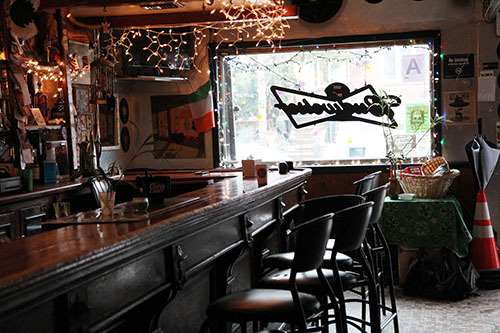 Photo by Nancy A. Ruhling
Where the drinks and fun are cheap.

Since at least 1939, it’s been a bottoms-up venue: The bar is topped by apartments.

Ozzie, who is 46, doesn’t remember whether he was drawn in by the illuminated sign that is visible from a block away or by a simple sense of neighborhood nostalgia.

At any rate, he thought it would be a good place to book a band. 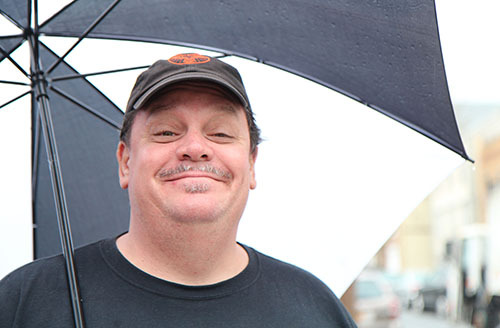 Photo by Nancy A. Ruhling
By day, he’s a handyman.

There are many things that Ozzie loves, and music is one of them.

“We used to visit my dad’s parents in Puerto Rico, and they lived next to a band,” he says. “I used to hang out with them and listen to them rehearse.” 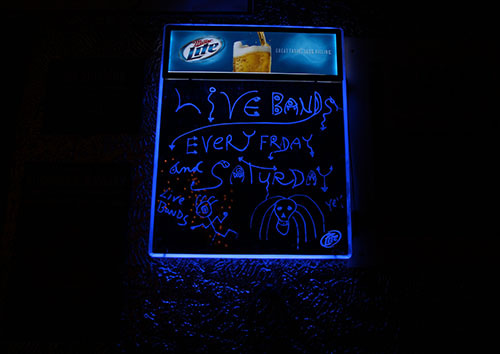 Photo by Nancy A. Ruhling
Like the music? Tell Ozzie.

At 9, when his parents divorced, he persuaded his grandfather to buy him a used 1968 Fender Stratocaster. 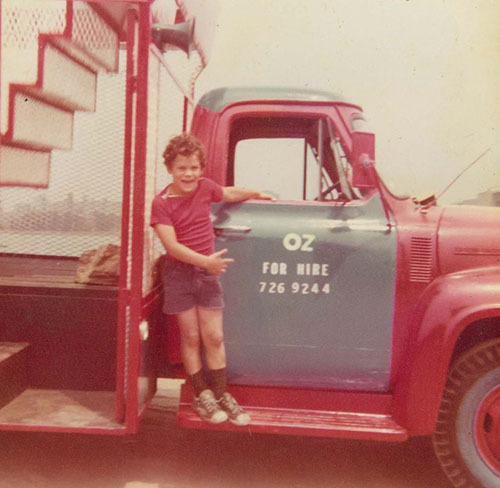 Photo by Nancy A. Ruhling
Ozzie at age 7.

It was the color of psychedelic lemons, and he cherished it, but its frets and his fingers were never in sync.

He traded it for a bass but soon gave that up, too. 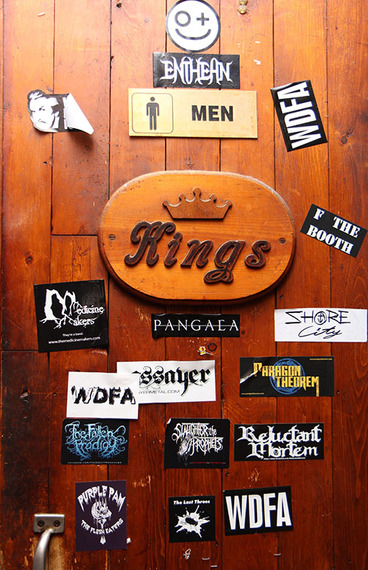 Photo by Nancy A. Ruhling
Even the men’s room door has a theme.

“I wanted to be in the center of the stage, not at the side,” he says. “So I started singing with bands.”

By the time Ozzie was in high school, his mom had moved the family to Coral Springs, Florida, where she had ties.

Ozzie had always had a lot of interests, so it was hard for him to choose which to focus on. 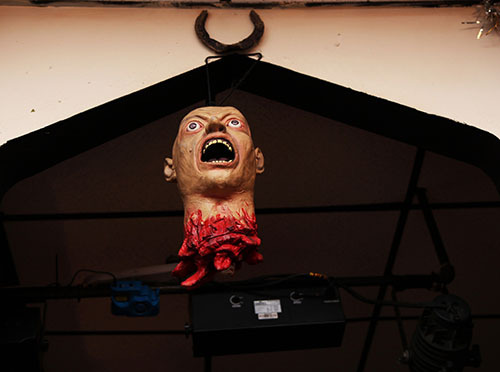 Photo by Nancy A. Ruhling
Ozzie does the decorating.

“I’m a Gemini,” he says as if this explains everything, and perhaps, in his case, it does.

As soon as he got his high school diploma, he worked his way into the construction industry. 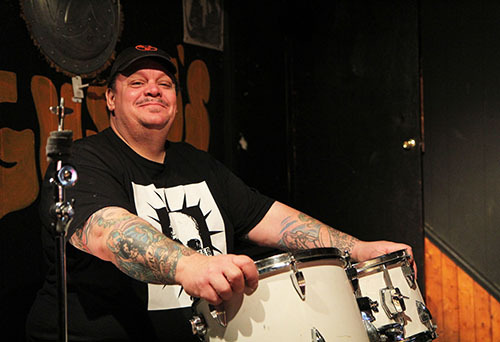 Photo by Nancy A. Ruhling
Playing around on the stage.

“I started where you’re supposed to,” he says. “From the ground up.”

In 1989, he returned to Astoria, where he immersed himself in the music business and set up Necromancer Productions, which is named after a medieval vampire character he created. 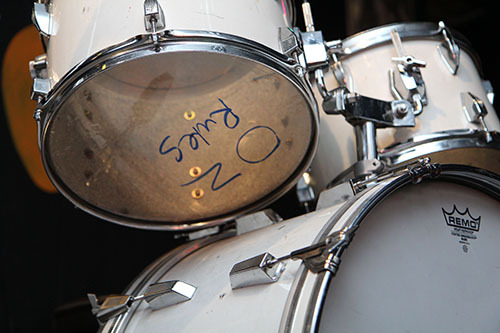 Photo by Nancy A. Ruhling
In the land of Ozzie.

“The name is from an ancient term for ‘love of the dead,'” he says.

At the same time — remember, he’s a Gemini — he set up the handyman business that bears his name.

“I’m having a ball doing both of these things,” he says. “Making people happy — that’s my purpose on this planet.” 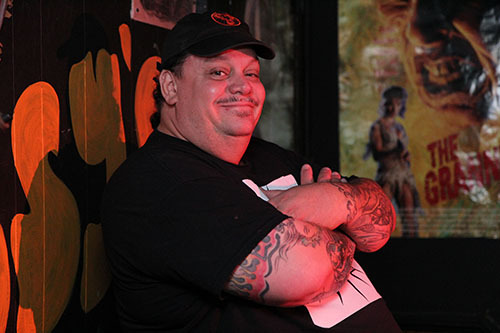 Photo by Nancy A. Ruhling
Ozzie in the spotlight.

Gussy’s got him all fired up. He built and decorated the stage and dressing room and began booking a variety of bands that play everything from county and ska to Goth and industrial.

“We’ve had violins and mandolins and flutes,” he says. “We have not had harps or bagpipes, but I can’t wait to get them.” 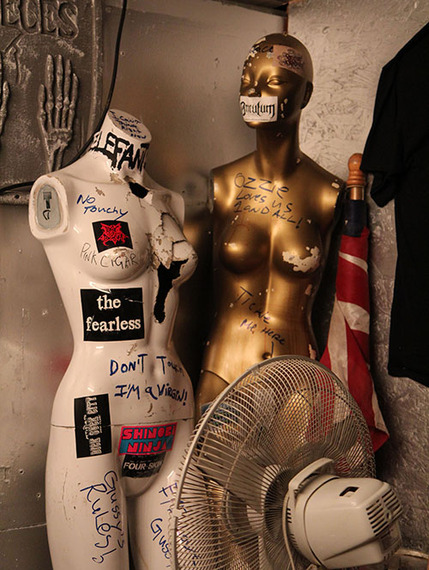 Photo by Nancy A. Ruhling
The groupies in the dressing room.

He also can’t wait to make Gussy’s a must-hear venue that has a worldwide following.

It’s beginning to happen: Already Ozzie has booked bands from as far away as Holland and France. 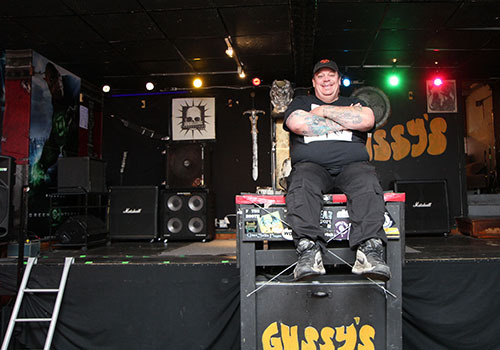 Photo by Nancy A. Ruhling
Where he likes to be.

But there’s more. At some point, and Ozzie hopes it is soon, he will return to the stage.

“I’m a good singer when I practice, and I’m starting to get my song list together,” he says. “I do everyone from Neil Diamond to Black Sabbath.”

He tries out a few bars. Hum, he still needs to work on the high notes. 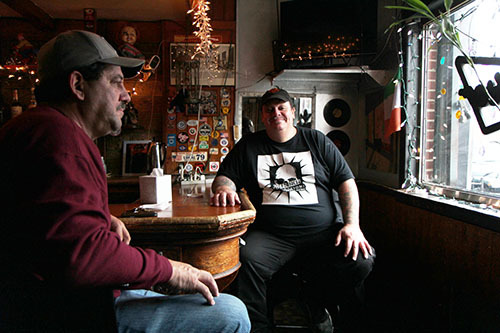 Photo by Nancy A. Ruhling
Have a drink. Ozzie will make you feel right at home.

Ozzie can’t think of anything better than working Gussy’s on the weekends.

A couple of bulbs in the stage spotlights have burned out. Ozzie climbs a ladder to replace them.