“Not all pizza is created equal,” says Walid Idriss as he sprinkles flour on the countertop and places a roll of dough in the center. 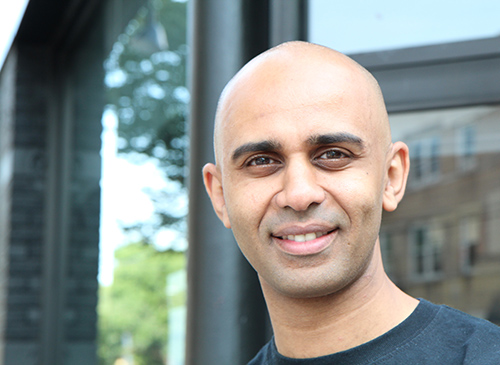 Walid is the owner of Macoletta.

The crust may be a little thicker or thinner. The toppings may be arranged slightly differently.

Or in the case of the one he’s making, the pie may not form a perfect circle. 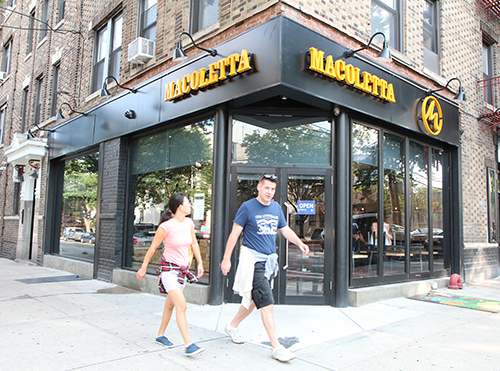 And that’s OK by him. In fact, it’s kind of the point.

When Walid opened Macoletta, his artisanal brick-oven, Neapolitan-style pizzeria/wine and beer bar earlier this year, he never intended it to follow the rote recipes of Pizza 101.

That may be because in his entire life, the 36-year-old Walid has never chosen a conventional path. 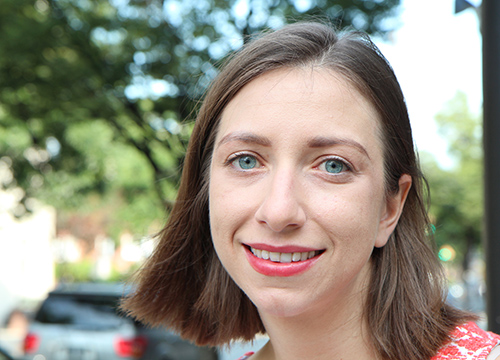 Cara and Walid met at an Astoria restaurant.

Walid, whose parents are from Egypt, was born and raised in Algiers, the capital city of Algeria.

After graduating from a French high school in Algiers in 2000, he decided to come to New York instead of going to college. His first stop was White Plains, where his older brother lived.

“My parents thought I was crazy,” he says. “I didn’t have a plan. I knew how to speak French and Italian and Arabic, but I didn’t know how to speak English.” 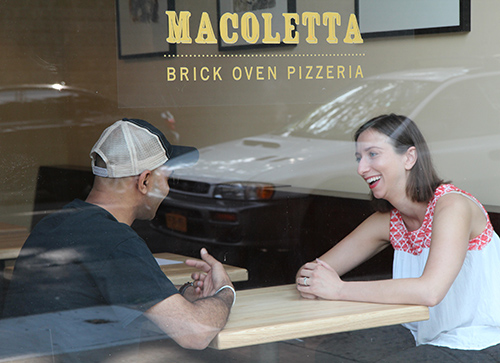 But America had always been on his mind.

“When I was 8, we came to New York City for a family vacation,” he says, “and I knew I wanted to live here.” 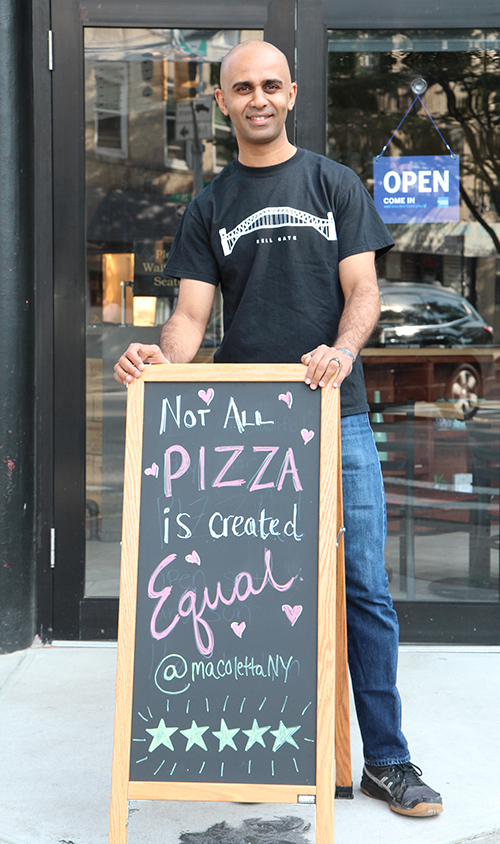 Walid came to New York when he was 18.

He got a job in a restaurant, where he worked 14-hour shifts prepping salads and pastas.

“I had never worked in my life or in a kitchen,” he says. “I didn’t even know the names of the pastas.”

A year later, he moved to Nyack to live with his uncle and subsequently worked his way through an American language school, Rockland Community College and Baruch College by managing five gas stations and filling in his spare hours with shifts at restaurants. He also had a series of unpaid internships at banks. 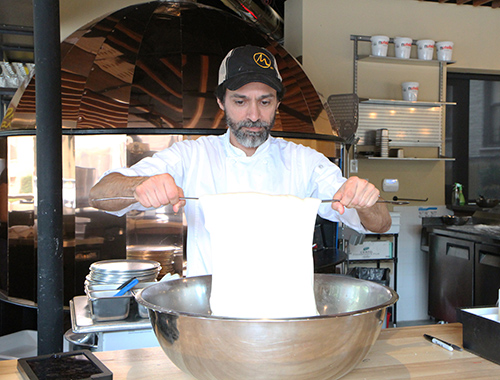 “I’m best when I’m really busy,” he says, as he pulls his pizza out of the oven.

In 2005, he moved to Astoria, and in 2009 he graduated from Baruch with majors in math and actuarial science. He promptly took a full-time job in a French restaurant.

“It took me that long to get a degree because I was working all the time,” he says apologetically. 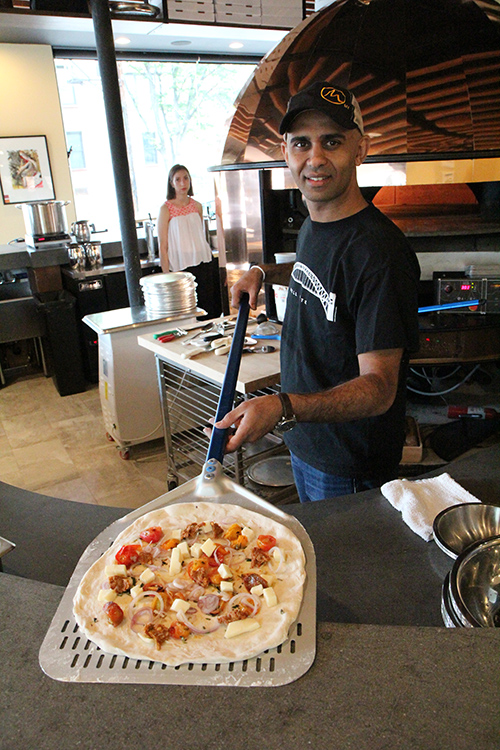 That same year, he met his wife, Cara, a native of Washington, D.C., who had come to New York in 2008 after earning a bachelor’s degree in anthropology from Holy Cross in Worcester, Massachusetts then doing volunteer work with homeless women in California.

Cara’s first job in New York was with a public relations firm; later, she worked in a Manhattan restaurant. 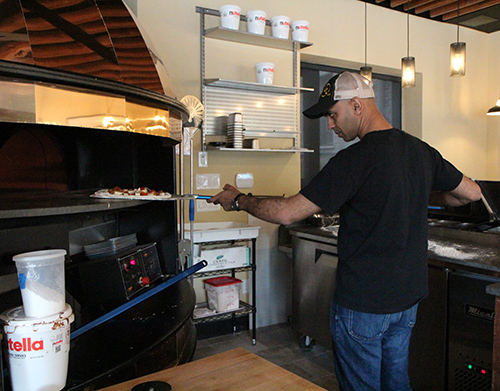 That’s where they were in life when they arrived at Brick Café (now Mom’s) in Astoria.

“The seats were so close that it was almost like we were sitting at the same table,” Walid says. 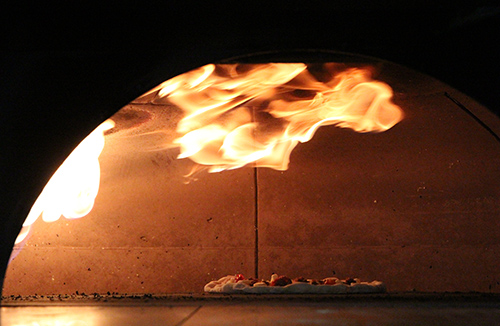 Macoletta is the only restaurant in New York City with a Marana Forni pizza oven.

There was no reason for them to converse with each other because they each had come with a friend.

But given such close quarters, Walid, who loves pi as much as pizza pie, couldn’t help overhearing Cara mention that she was looking for a math tutor to prep her for the GRE exam.

He offered to help.

She was, to say the least, surprised by his overture.

“He and his friend had been speaking French,” she says, adding that she wasn’t paying much attention to them. 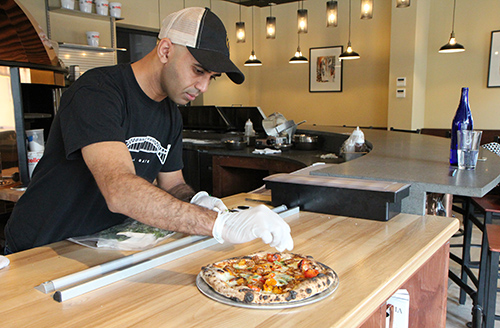 So it was that Walid, who may or may not have told Cara that he was looking for an English tutor for the GRE (he says no; she insists yes) began tutoring each other. And dating and living together.

“We both actually did study, and we did learn a lot,” Cara says, adding that she did, indeed, take the GRE and did, indeed, pass it. 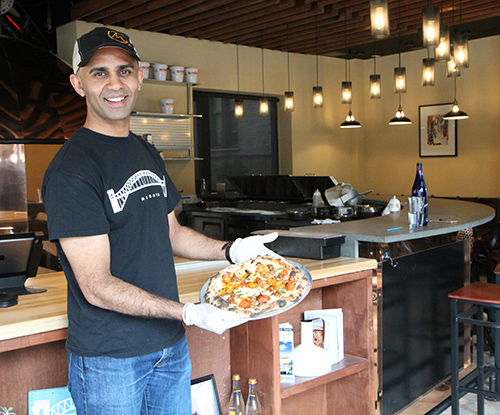 While Cara was earning her master’s in anthropology from New York University, Walid, who never did get around to taking that GRE, was pursuing a career in banking. 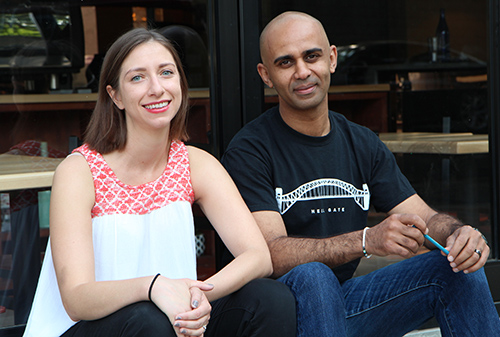 Cara is working on a doctorate in anthropology at NYU.

“We’re very different, and I like that,” says Cara, who is working full time on her doctorate in anthropology at NYU and helping Walid with public relations and marketing for Macoletta. “I’m into reading and writing, and he’s into math – he does calculus for fun – and entrepreneurship. We learn from each other.” 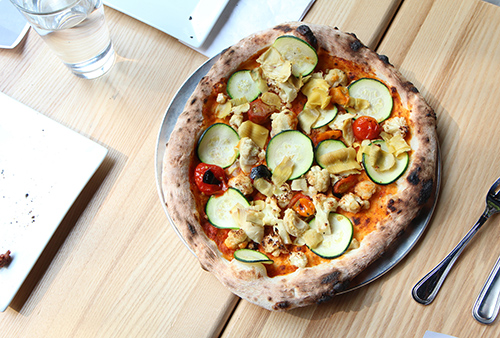 “I had quit my job, but a bank I had worked for before offered me a position, so I’m still working there full time,” he says. “I really like doing both things.”

Walid brings a second pizza to the table. It’s the pizzeria’s signature Macoletta – cauliflower, roasted tomatoes, zucchini, artichokes, olive oil and sea salt resting on a bed of harissa, the Maghrebi hot red-pepper paste that reminds him of his heritage. 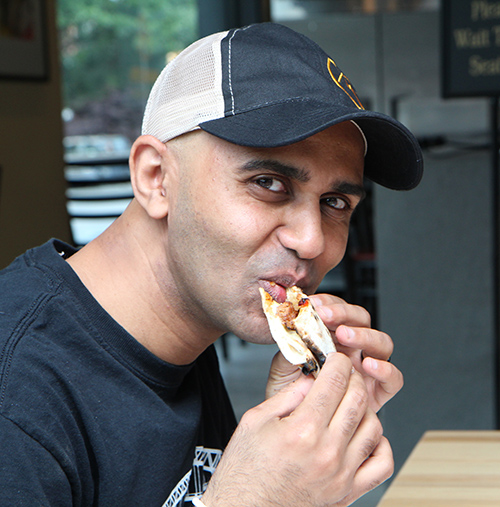 You know you want a bite!

Walid says opening Macoletta was an easy decision because pizza is his favorite food. 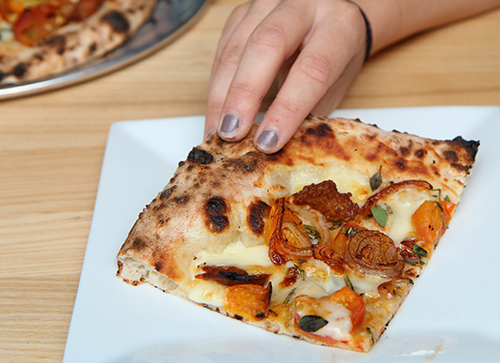 Cara confirms this, adding that “he even loves frozen pizza, so much so that people got tired of him offering it to them when they came to our apartment.”

Once Macoletta is a success, Walid hopes to open more of them. 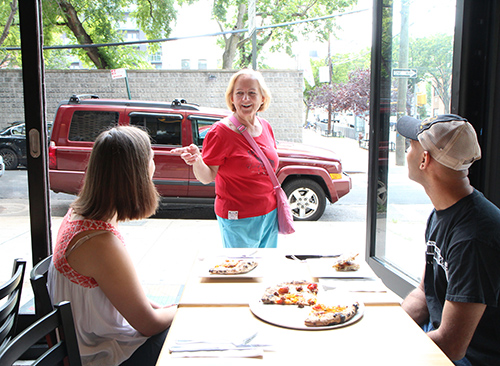 Chatting with a neighbor.

He serves dessert – Nutella pizza with the chocolate spread sandwiched between the pastry-thin, oven-warm crust.