Fresh from Sunday mass, Joe Vitale shouts this greeting to the sky.

His towering fig trees await. At this house, he has eight that form a green canopy over his postage stamp of a front yard. Below them, sheltering in their shade, are a half dozen cuttings he’s rooting. In the back, he has four fine trees.

At his other house, around the corner, he’s blessed enough to have two.

And now he wants to give me one. 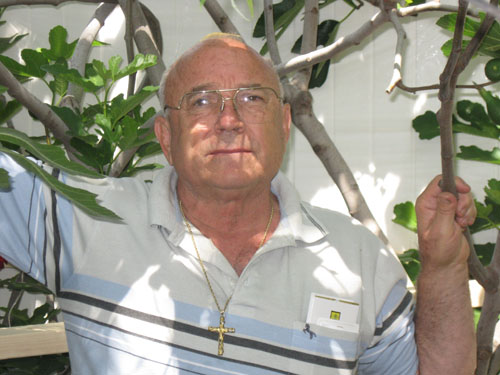 Photo by Nancy A. Ruhling
Joe with his fig trees.

“I love the fig trees,” he says as he picks a prime plant and presents it to me as if it were a crown jewel. “They bring good luck.”

Joe, the Johnny Appleseed of figs, is a short, taut man with a fringe of white hair and brawny hands that taper to dirt-stained fingernails. He wears big wire-rim glasses that magnify his brown eyes. Around his sunburned neck, he wears a hand-forged gold cross he bought in Italy decades ago.

Joe, who was born in Palermo, Italy and christened Pepino by his parents, is the fig savior. When he bought this house six years ago, the fig tree in back was all but dead. 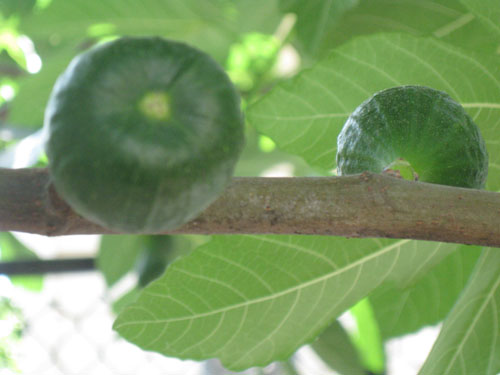 Photo by Nancy A. Ruhling
The plump green figs of Joe’s trees.

“The owner was a 95-year-old Italian man,” he says. “One of the neighbors told me that he had given him the tree more than 50 years ago.”

Joe nursed it back to health, and fig growing grew on him.

These are August figs, he takes time to explain. Their plump fruit ripens in June and again in August. 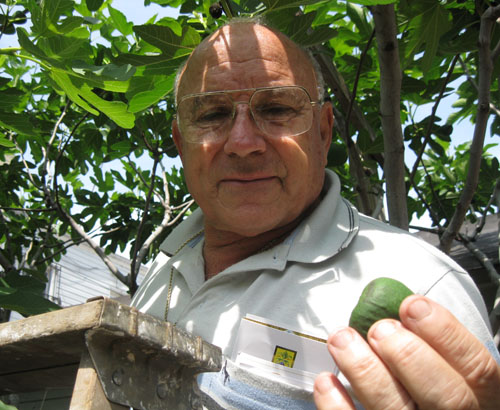 Photo by Nancy A. Ruhling
The figs are finger-pickin’ good.

He waters each of them then heads to the back yard to check up on that half-century-old fig. It’s doing well this year.

“The figs are like babies,” he says, as he climbs an old wooden ladder to pluck its fruit. “You have to know what they want and take care of them.”

The figs remind Joe of his life in Palermo. He lives here now, yes, and America has been good to him, but he’d rather be in Italy. 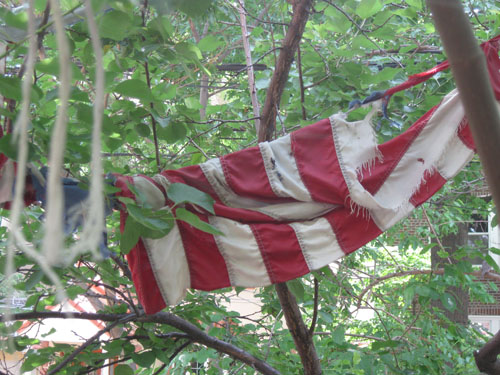 Photo by Nancy A. Ruhling
The red, white and blue adds to the green.

“But God sent me here,” he says. “My children, my grandchildren — my blood — are here.”

Joe, 78, is the youngest of eight children, and one of his earliest memories is of hearing Mussolini declare war on England and France. 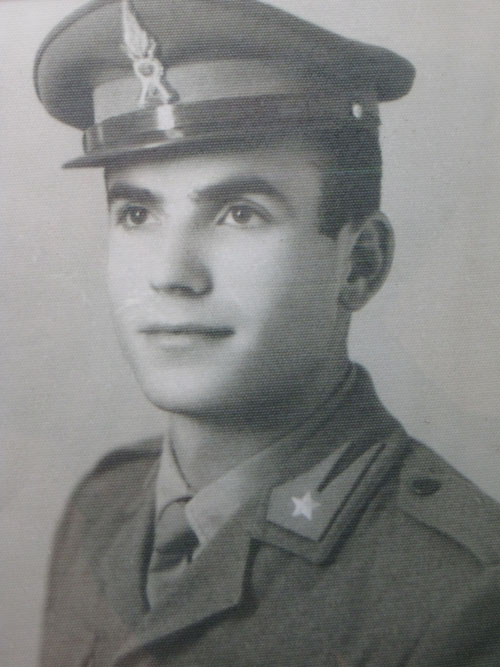 Photo by Nancy A. Ruhling
Joe during his Army days.

Joe studied accounting, something he’s proud of even though he never practiced the profession in America. His framed diploma hangs on the wall in his living room, next to family photos and a poster of the pope. It is illuminated by two massive crystal chandeliers, whose light also spills over onto a framed map of Italia.

At that time, Russia loomed as a threat, and he joined the Army for three years, where he trained soldiers to shoot at tanks.

“The secret is calculating speed and distance,” he says. “I could still do it if I have to.” 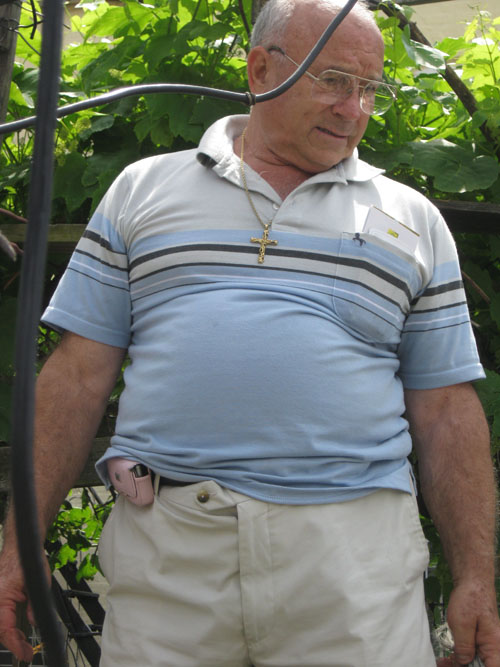 Photo by Nancy A. Ruhling
Joe, aka the Fig Man.

After some of his siblings came to New York, Joe decided to follow them. “I was political at that time,” he says. “The Mafia killed a lot of my friends. That was the reason I came.”

Shortly after he arrived in 1960, he married a good Catholic Italian girl who was a friend of his sister’s. They had two sons.

Joe, who became a U.S. citizen in 1967, opened a 24-hour wholesale/retail grocery in Manhattan, and in 1969, he bought the house he and his wife, Frances, still live in. 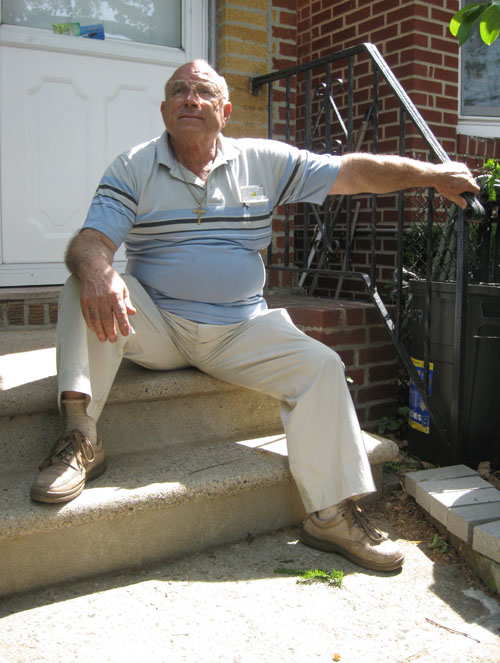 Photo by Nancy A. Ruhling
Sitting in Astoria, dreaming of Palermo.

At that house, where’s he’s now headed, there are many more plants. The front, guarded by a pair of concrete lions, is filled with figs and apricot trees. This garden is bigger and better than the other one because he’s been working on it since 1995, when he retired.

“I never saw so many grape leaves,” he says, following the vine that crawls along the side of the house and onto the wooden trellis of his roof garden. “I trained it to do this.”

The grape vine travels past dozens of plastic tubs filled with bean, tomato, squash and zucchini plants that are just starting to sprout. 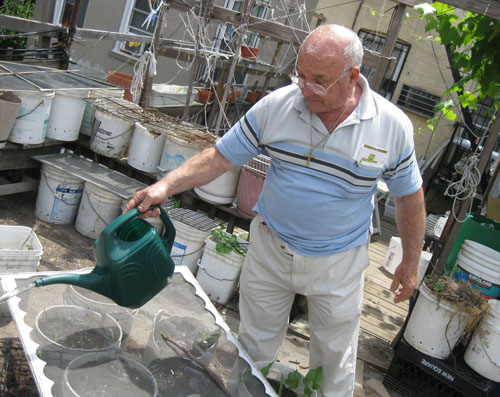 “They will cover the whole roof later in the summer,” Joe says, his voice excited with delight.

Joe picks up a plastic milk carton and dips into a tub of water to begin the morning feeding. If you think this is a lot of plants, you should see Joe’s property in Palermo. He has 10 acres, inherited from his grandfather, that are filled with olives, almonds, prickly pears, and of course, his beloved figs.

“I love the land,” he says, adding that he can’t wait to get on the plane for his annual month-long visit.

Joe’s other hobby is rummy. He plays at his Italian club in Bayside. “We play for five cents; some days I win, some days I lose,” he says.

Sundays are devoted to church. “I’ve always been religious,” he says. “As a boy, I was raised Catholic, and I even learned to speak Latin.” 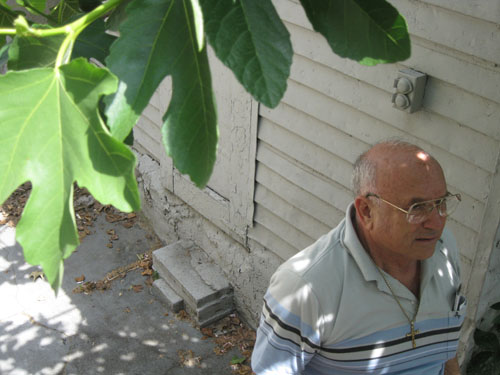 Photo by Nancy A. Ruhling
The figs of August carry Joe into the autumn.

The way Joe sees it, plants are God’s special creations, and he’s their caretaker. “When I break something on them, I say, ‘I’m sorry about the branch,'” Joe says. “They have a life.”

The watering done, he heads back inside. Oh, he’s forgotten something. He picks up the clippers and lovingly snips off the tip of my baby fig tree.

“The cut stimulates it,” he says as he hands the three-foot-long plant back to me. “You plant it, and like me, you will have good luck.”