The map on the wall is punctuated with round red pins that look like Rudolph’s reindeer nose. Each one of them, Ben Taylor explains, marks the spot where Beecher’s Fault, the band he leads with Ken Lamken, has played.

The dots, nearly two dozen in number, travel up and down, round and round and sideways along the East Coast. 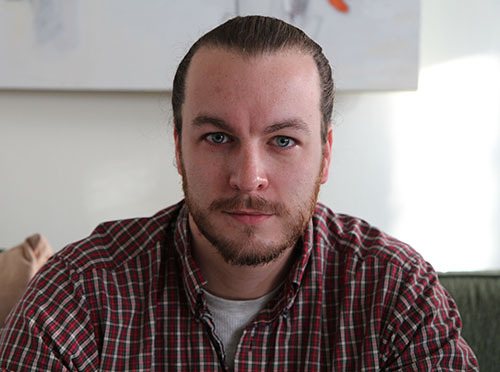 Photo by Nancy A. Ruhling
Ken’s a native of New Jersey.

Last night, the dot was Lancaster, Pennsylvania. By the time Ken and Ben and bandmates Max Maples (drums), Serge Ruccolo (bass) and Lauren Hunt (singer), hit home, it was 4 a.m., too late to pin a pin on the map.

Ken and Ben — that’s what people used to call them when they were a duo, and it makes them cringe — have been touring ever since they released their first album in 2011.

They met, through friends in 2010, shortly after college while they were living in New Jersey with their parents. 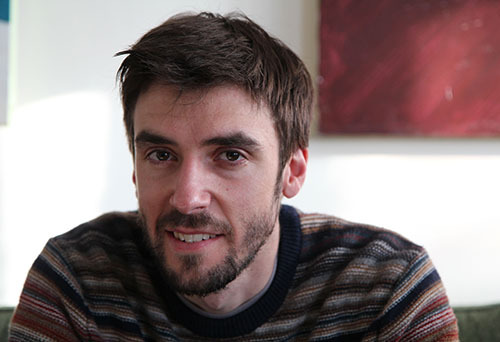 Photo by Nancy A. Ruhling
Ben was born and raised in England.

Ken, who has serious, searing blue eyes and ties his fair hair in a bun, is a native of the Garden State.

Ben, who grew up near the south-coast seaside resort of Bournemouth, England, had lived in Houston for three years before landing in Randolph. When you listen carefully, you can catch a faint Anglo accent that is accentuated when he sings.

Each of them discovered music at an early age. Ken, who is from Morris Plains, started playing piano at 8. But by 9, he had shelved the scales.

“I was more interested in playing outdoors,” he says. 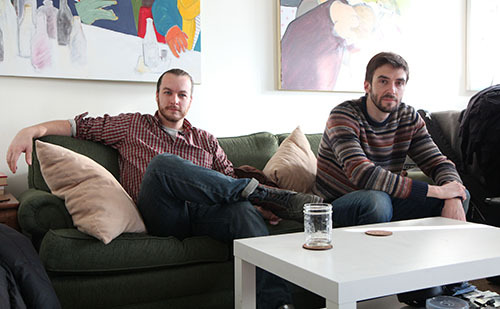 Photo by Nancy A. Ruhling
Ken and Ben are the leaders of Beecher’s Fault.

Ben, on the other hand, embraced the 88 keys, commencing lessons at 6 and making serious study of the instrument for some seven years.

“I switched to the drums then took up the guitar in high school,” he says, tapping his long, slender fingers on his coffee cup.

High school is when Ken reconnected with the notes, taking up the acoustic guitar and slowly returning to the piano. During a trip to Belize, he discovered the throbbing heartbeat of the drum. 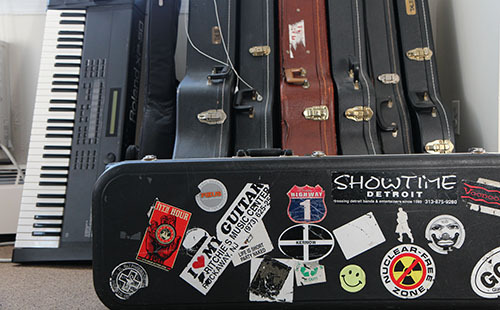 Photo by Nancy A. Ruhling
Ready for the road.

“I bought a hand drum there and took part in a drum circle,” he says. “I played all night.”

Ken, who also is a painter, majored in fine arts at York College in Pennsylvania.

“I still paint,” he says, glancing at the artwork he made for the walls of his apartment. “But music is a more universal channel and art form. Artists spend hours making works for galleries that show them to small groups of people. But when you make music, you put it on YouTube, and it goes out to the world.” 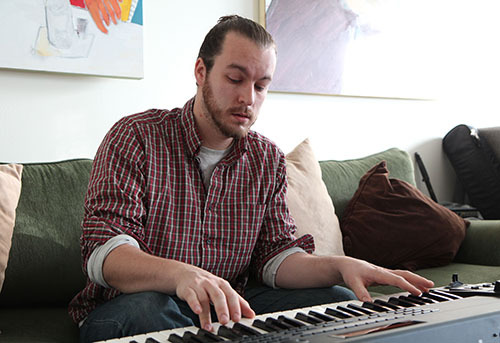 Photo by Nancy A. Ruhling
Ken on the keyboard.

Ben followed a similar course, getting a degree from Colgate University in environmental geography with a minor in music.

They thought about other careers — Ken, for instance, was a fine-arts consultant for a period too brief to remember — but they kept coming back to music.

When they met, something clicked and the timing was right, so they packed up their guitars and keyboards and headed to Astoria, where Beecher’s Fault, which is named after a brilliant but bumbling friend, was born. 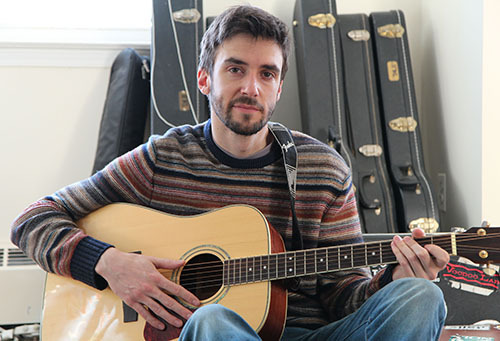 Photo by Nancy A. Ruhling
Ben took up the guitar in high school.

Soon, they were writing pop songs and playing in a variety of venues in Astoria, including the Irish Whiskey Bar, Rèst-âü-Ránt and The Quays Pub.

“Most of our lyrics are derived from our own lives and experiences,” Ken says.

Or, Ben adds, stories from friends.

Generally, one of them comes up with an idea and starts working on the chords, melody and lyrics and bounces it off the other.

As the work progresses, they get more feedback from their bandmates.

The result is rock-bouncy, twisty songs like Liquor Store, which is about a relationship that drowned in alcohol, leading the singer to plead:

Hey, don’t walk away
Don’t wanna let you go
And if you stay
I’m going to let you know,
that I can change. 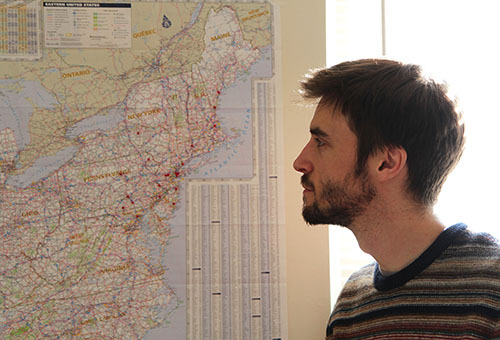 Photo by Nancy A. Ruhling
Someday, Ben’s touring map will span the globe.

Things have been going quite well for Beecher’s Fault, and Ken and Ben, who are closing in on 30, have started a company of the same name that produces songs for TV and film.

They still have other jobs — they are bartenders at Manhattan establishments — but increasingly, they are devoting more time to touring, because, they say, that’s what makes them happiest.

Ben looks at the map on the wall. Someday, he says, he’ll replace it with a globe filled with red pins that span the continents.