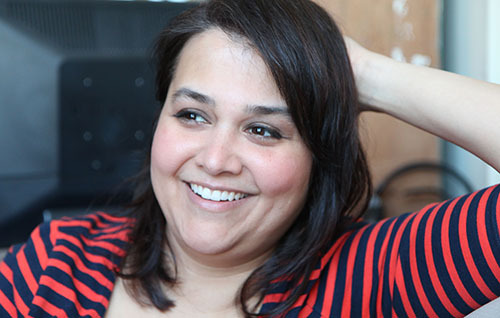 Photo by Nancy A. Ruhling
Shelly strives for balance.

Shelly Bhushan lists these labels — she doesn’t think she has left any out — and adds juggler. That’s the one word that defines her life.

“I’m doing what all women do,” she says. “It’s the most incredible balancing act.” 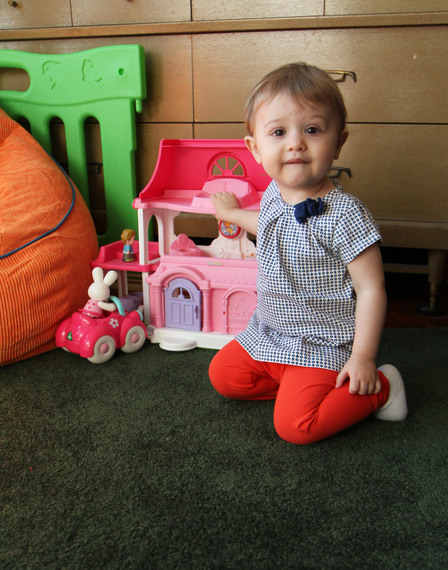 Photo by Nancy A. Ruhling
Leena is 17 months old.

Her husband, John Celentano, is on the floor trying to get the attention of their 17-month-old daughter, Leena, who has baby eyes only for the TV.

Finally, he scoops her up and takes her to the kitchen, where he spoon-feeds her breakfast cereal as Shelly settles into the sofa. 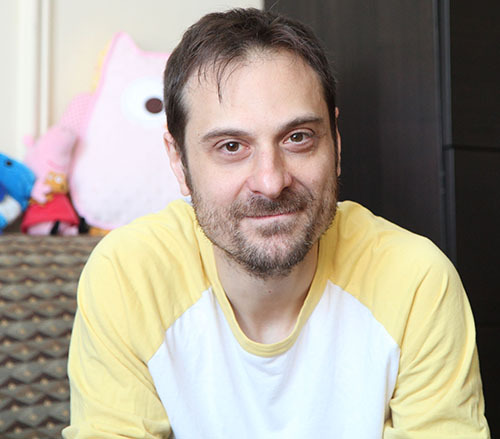 Photo by Nancy A. Ruhling
John’s the drummer in Shelly’s band.

Shelly doesn’t need to mention that music, her No. 1 love in life, has taken a backseat to motherhood.

The keys of the upright piano in the corner are locked up, and the guitars are lying atop the bookcase, perched so high that the ceiling can strum them. 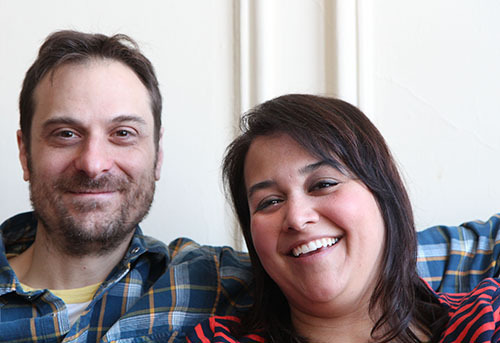 Photo by Nancy A. Ruhling
John and Shelly are creative and practical.

“I’ve always lived a double life,” say Shelly, a smoky soprano with dark hair and inky eyes. “I have a 9-to-5 job at an ad agency that I love because I get to work with creative people, and at night, I work on my music.”

It’s hard for Shelly not to write songs.

“Sometimes, they just pop into my head,” she says. “I was on my way to the dentist the other day, and like a bolt of lightning, the words and music just came. I recorded it on my iPhone and then refined it at home later.”

Shelly grew up in Houston and Dallas in a family where music was appreciated but not practiced. 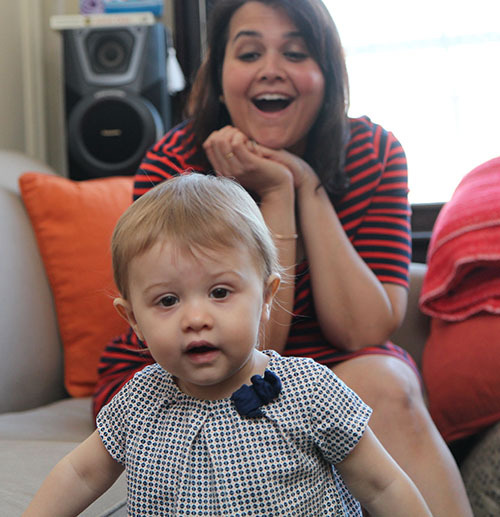 Photo by Nancy A. Ruhling
A mother-daughter Kodak moment.

Her immigrant parents — her father is from India, and her mother is a native of Mexico — spent most of their time working.

“Music was always a backdrop to my life,” Shelly says. “I was too shy to sing out loud so I lip-synced to the car radio.”

Being cast in a second-grade Christmas show allowed Shelly to find her voice. She taught herself to play guitar and piano and pursued music through high school and college, where, as a practical measure, she majored in advertising. 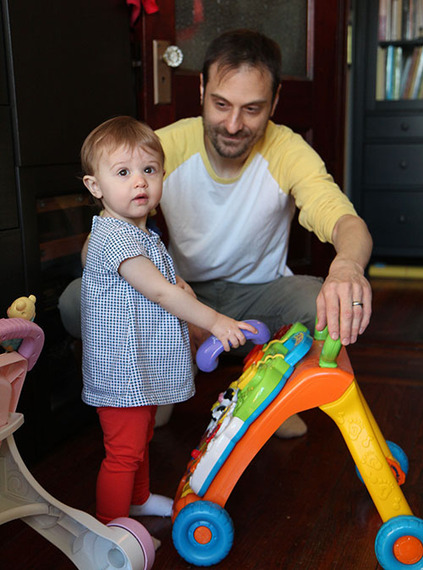 Photo by Nancy A. Ruhling
Leena and her dad at play.

Although she got a day job, she still sang at night, and after a couple of years moved to New York City.

“I answered an ad in The Village Voice for a singer,” she says. “I earned money by freelancing, but eventually the band broke up.” 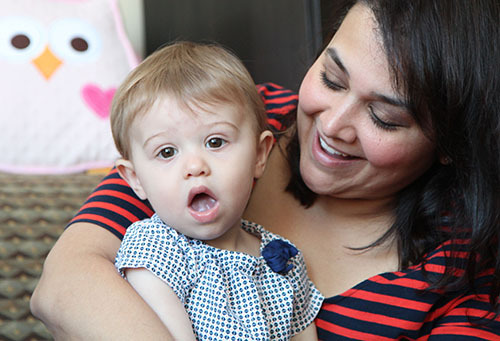 Photo by Nancy A. Ruhling
Shelly’s music has been on the back shelf since Leena’s birth.

She met John, a drummer who makes his living as a music teacher, a composer for ads, games and films and a computer programmer, at a networking event.

John, who grew up in Uniondale, New York, and who has bachelor’s and master’s degrees in music, soon joined Shelly’s band.

They devoted themselves to their day and night jobs until Leena re-arranged their routine. 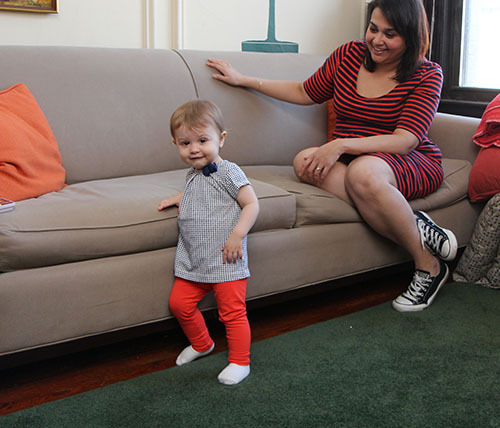 Photo by Nancy A. Ruhling
Shelly’s music is inspired by everyday life.

Shelly did take a non-musical interlude when Leena entered the mix, but recently, she’s started working on album No. 5, which she hopes to release in the next year or so.

“I knew I couldn’t stay away long,” she says. “Whenever I try to walk away from music, it pulls me back.”

It’s too early to tell whether Leena will make three. A trio would round out the family tree, but John and Shelly aren’t pushing her. 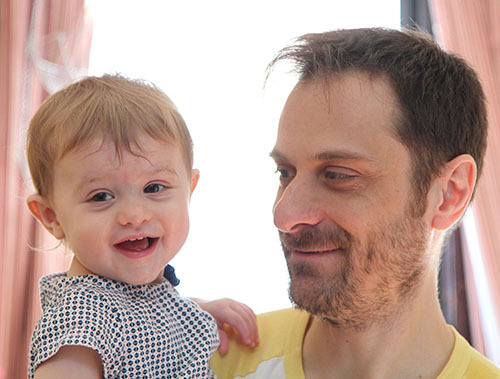 Photo by Nancy A. Ruhling
Will Leena join the band?

“She does a little call and response,” Shelly says. “She has a keyboard, and she does like to strum the guitar.”

She watches as Leena plays with her balls and blocks. 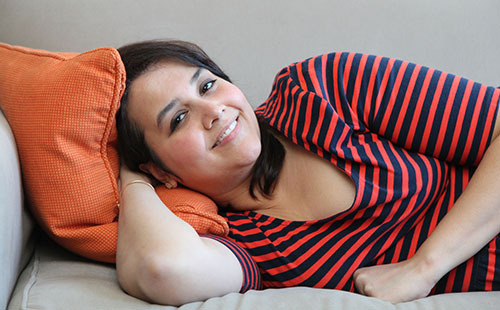 Photo by Nancy A. Ruhling
Shelly’s working on album No. 5.

She would like to prove to her daughter, by example, that it’s possible to pursue an artistic career as well as raise a family.

“I’m in this for the long haul,” Shelly says. “It’s about making music that people are into, it’s not about being famous.”

In her mind, Shelly tosses another ball into the air. She holds her hands out to catch it, but Leena jumps up and grabs it.