Everybody else in the house is still asleep. That’s why Tommy Capezza is waiting at the front door.

It’s not only about being quiet. Tommy, a bulldog with an accordion-fold face and a prizefighter’s rosy cauliflower nose, has a lot to say, private stuff to get off his chest, and he might not want his wife or his grandson to hear some of it. At least not from his own lips. 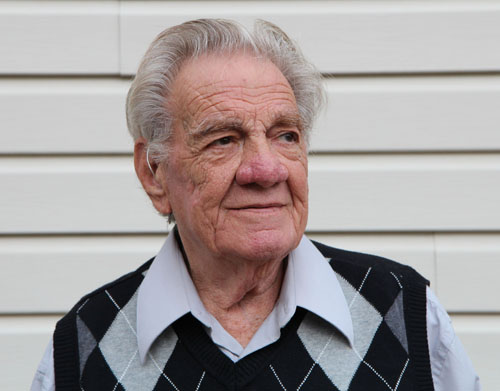 Photo by Nancy A. Ruhling
For Tommy, every year has been an adventure.

Tommy — they used to call him Tommy Red when his hair was the auburn of chestnuts — is 84 and by God, he’s done a lot of things that many people would not approve of. Not that he’s ashamed of any of it.

He grew up poor in Manhattan, and there were nine more like him at home, so he did what he had to do. He was 8 when he started putting food on the table; his pack-a-day habit curbed his appetite.

“My first job was stealing hub caps,” he says, adding that his dad, an Italian immigrant, lost his job in the Great Depression. “I also stole brass from a factory because my friends and I were hungry. One time, I bought us heroes and tuna fish, and we made sandwiches and sat on the sidewalk eating them.” 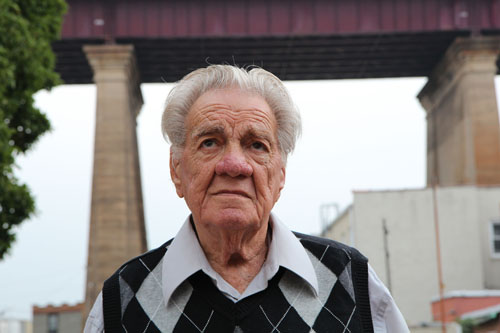 Photo by Nancy A. Ruhling
At 84, he longs for his wild days.

There wasn’t a school that could hold Tommy, and he still gets a kick out of that.

“When I was 6, I skipped my first day of classes,” he says. “I was a wild kid, always on the street. I used to sleep in cars, and the truant officer was always after me. Once, the court ordered me to spend 30 days at the Children’s Aid Society. I was a tough kid, but they made me do the duck walk until tears came down my eyes. And they sentenced me to the dungeon.”

The few times Tommy was in class, he worked hard to get into trouble. 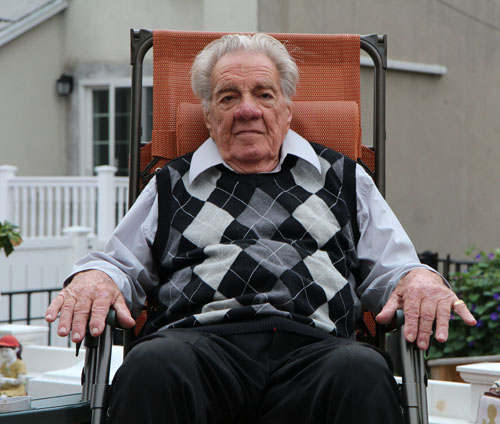 Photo by Nancy A. Ruhling
Today, most of his drama plays out on the TV screen.

“I put mirrors on my shoes so I could look up the girls’ dresses,” he says. “When the teacher hit me with her ruler, which she did more than once, I took it and broke it.”

The only thing Tommy was serious about was earning a living. At 13, he held down three jobs that kept him busy from 5 a.m. to 9 p.m. He loaded and unloaded trucks in a Harlem vegetable market and groomed and hitched horses at a stable.

In addition, he went to the Bronx Terminal Market to buy produce for his Harlem job. And, at one time, he sold his own fruits and vegetables from a pushcart. As a 15-year-old, he was the janitor of an 18-unit apartment building. One of his tougher tasks was shoveling coal to feed its ferocious furnace. 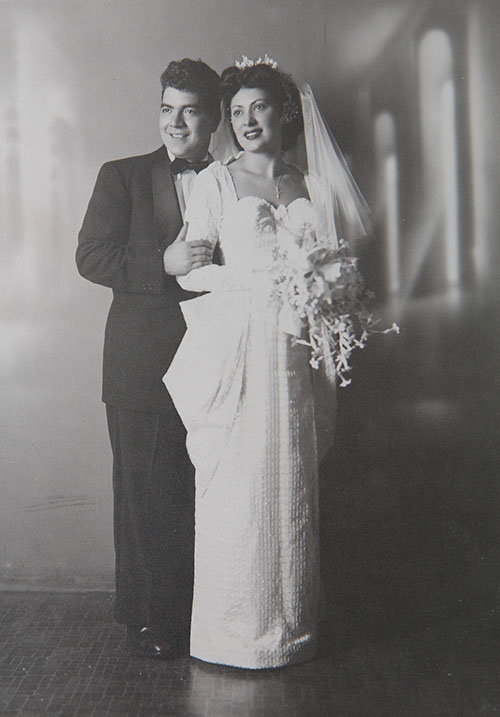 Photo by Nancy A. Ruhling
Tommy on his wedding day when his hair was auburn.

Although he quit high school at 16, he did graduate, but he’s vague on the how and why. He never picked up his diploma. At first, he worked in his uncle’s luncheonette.

“He paid me $20 a week, but he took the money and put it all in the bank,” Tommy says. “I was a handsome young guy, and like John Gotti, I always dressed fantastic. I needed money.”

He got it by running numbers. 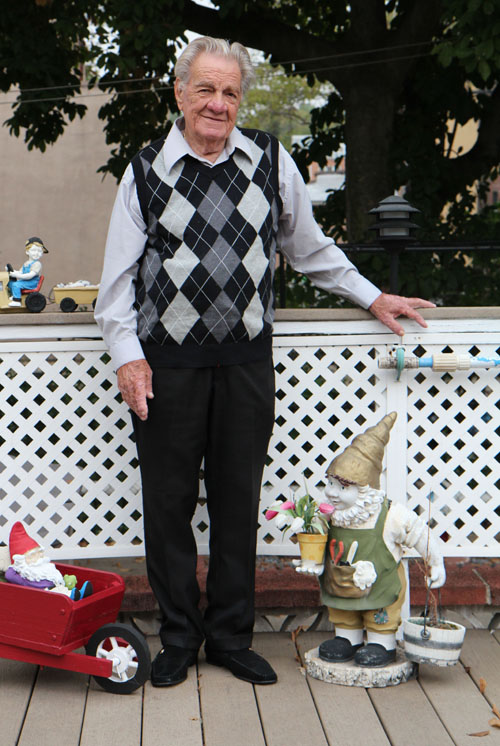 Photo by Nancy A. Ruhling
He was one tough kid.

“I got arrested, but the cops couldn’t find anything on me,” he says, smiling. “I had a secret compartment connected to my pants pocket. I also got arrested a few times for gambling. In those days, that was nothing.”

His life of petty crime paid off: When he was 19, he won $2,500 on the numbers and opened his own luncheonette on Ditmars Boulevard. To supplement his income and make things interesting, he became a clerk in a numbers-running office.

He met his future wife on a hot, hot day on a train in Manhattan and claims (wink, wink) that marriage tamed him.

“I had two girlfriends at one time, and I had to choose one,” he says. 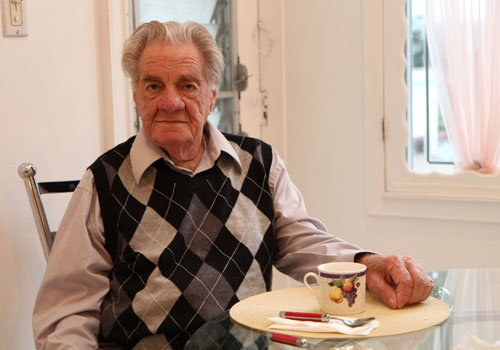 Photo by Nancy A. Ruhling
The early riser always fixes the breakfast.

Tommy has always had a soft spot in his heart for people in need, so in the 1950s, he established the Ditmars Community Association to help get kids off the streets. He remembers a delinquent in Rikers who had tried to break out by jumping into the drink.

“I brought him a big bag of candy and a carton of Marlboros and told him to get out and work,” he says. “He couldn’t have been more than 14. He told me he would never forget me as long as he lived. I never was able to find out his name to look him up.” 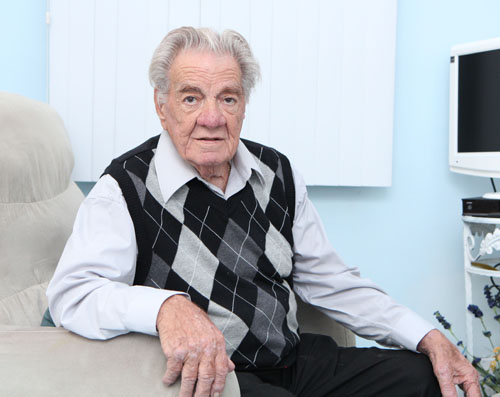 Photo by Nancy A. Ruhling
He hated to give up the cigarettes.

Tommy’s a street-smart survivor, but things didn’t always go his way. His wife had three miscarriages, and his son was born with spinal bifida.

“I sought various forms of treatment for him for 15 years, and I took to gambling to get it off my mind,” he says. “My wife condemned my clubbing and threw me out of the house three times.”

By this time, Tommy had his own vending machine company, so he had more than enough money to hedge his bets. 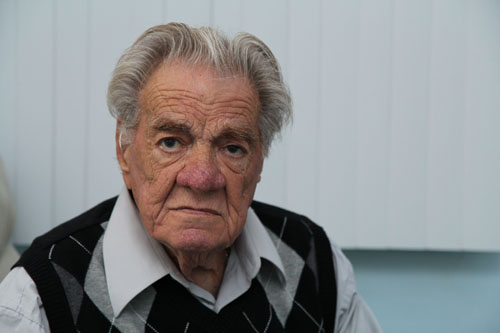 Photo by Nancy A. Ruhling
He misses the clubbing life.

“I used to borrow money from everyone to pay off my debt,” he says. “I owned three houses, and I owed one guy so much that I had to sell one.”

Partying came easy because for a couple of years Tommy owned the Pussycat, the Manhattan nightclub that attracted the likes of Johnny Carson and Joe Namath. He skips over these years pretty quickly; there’s a sense he’s holding something back. 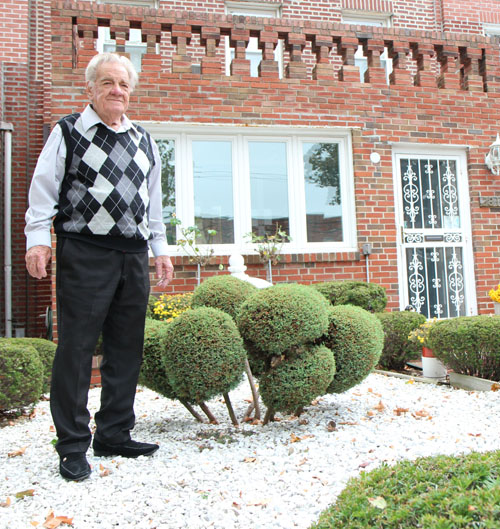 Photo by Nancy A. Ruhling
Tommy’s pretty much a homebody these days.

Drink (Courvoisier Cognac, straight with a lemon peel), smokes and destiny finally caught up with Tommy, and in 1999, he was felled by a heart attack. It made his wife come back, and it forced him to give up his four packs a day.

Since then, he’s had 14 operations here and there, and he only hears well when he’s wearing his aids.

“I miss the clubbing life,” he says. “My last friend just died.”

He walks over to the piano. No, he doesn’t play. He bought it for his daughter a half century ago when she wasn’t higher than his knee. 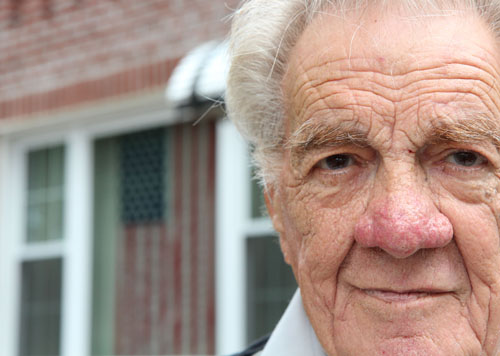 Photo by Nancy A. Ruhling
He’s still looking for excitement.

Tommy Red, whose argyle sweater and socks match, remembers the days when the women used to run after him; they loved to fuss over his hair. And he could get them to swoon when he crooned like Perry Cuomo.

Truth be told, he still cuts a handsome figure, especially when he’s in his silver Mercedes.