He was playing in the park when it happened. Somehow, the trinity of gold religious medals that he always wore slipped from his neck. Aaron Caruso‘s mother was so steamed that she made him go back to find them.

It was raining that day in the park, and 11-year-old Aaron took 10 steps, and there they were waiting for him. His mother was not surprised.

She had prayed for the safe return of Saint Anthony, the Holy Cross and Jesus, telling God that her son would sing for him. 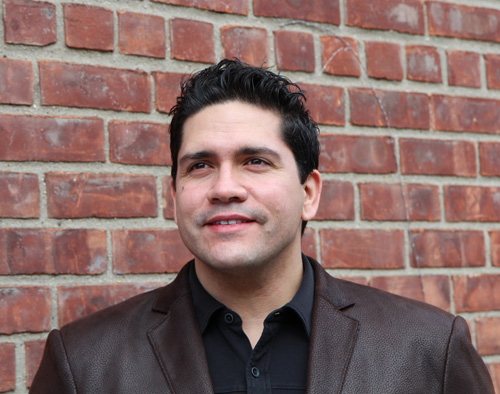 Photo by Nancy A. Ruhling
Aaron found his big voice when he was in his teens.

Aaron cringed. What singing he did wasn’t very good; in fact, it was awful. He knew this because his sister told him so. He was shy, so he shut up, playing out his passion for music on the piano and then the trombone instead.

When he was playing Torna a Surriento on the piano, his aunt asked him to sing the song, too. He declined but started learning the lyrics on the sly. 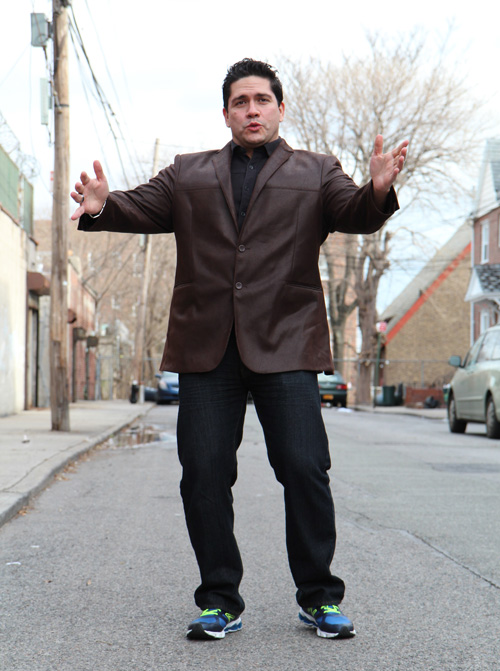 Photo by Nancy A. Ruhling
Aaron bursts into song.

“I was screaming my brains out,” he says. “I practiced it only when there was no one around. Singing Surriento is how I found my operatic voice at 13.”

To demonstrate, he bursts into song, gesticulating wildly. The room all but trembles when he goes full-throttle and the notes soar to the stratosphere. He stops after only one line of lyrics. It’s a good thing because the wineglasses on the kitchen counter aren’t shatterproof. 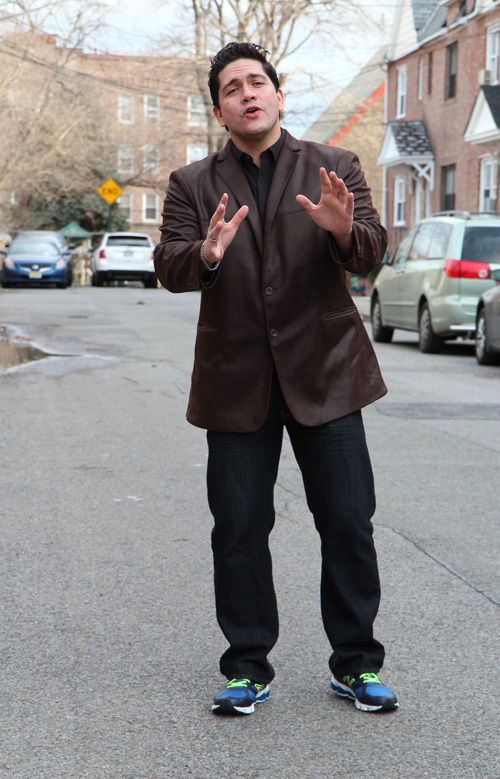 Photo by Nancy A. Ruhling
He embraces the melody.

The 36-year-old Aaron was raised in Michigan, a Midwestern middle child in what he calls a family that was “right in the middle of middle class.” He carries the broad shoulders of his father and grandfather, tough-ass Teamsters, and has the classic dark handsomeness of his Sicilian ancestors.

Nobody else in the family had an ear or a voice for music, but Aaron’s parents required their three children to take piano lessons nonetheless. 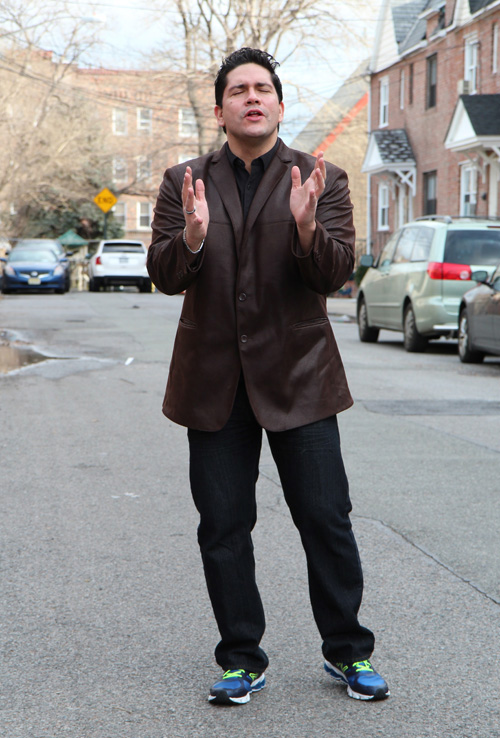 Photo by Nancy A. Ruhling
He sings his heart out.

“One of my earliest memories is of a music box I had,” Aaron says. “And my mom told me that when I was a baby I couldn’t sleep without music playing. Later, I had a tape recorder with Kenny Rogers and other oldies, and I carried it with me everywhere.” 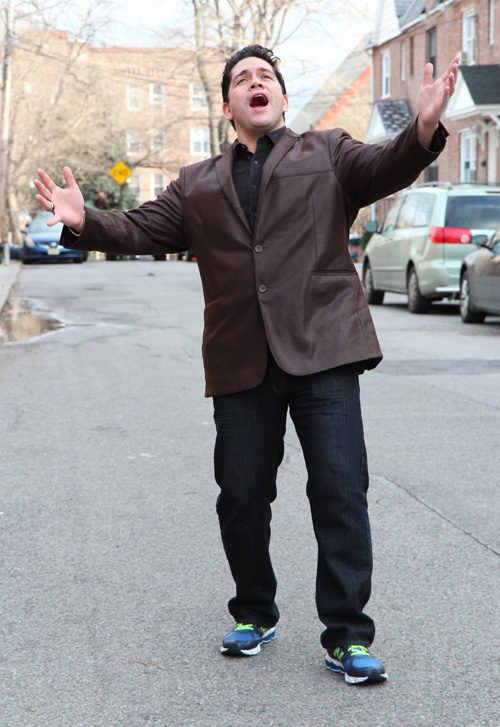 Photo by Nancy A. Ruhling
He finishes with a flourish.

But Aaron, the boy with the boom-box voice, had to wait to bring forth his timid tenor. It was only after he got kicked out of the high school marching band for missing numerous practices — he was playing football instead — that he got up enough nerve to march into the choir class.

“In the audition, I sang Surriento, and I gave it my all,” Aaron says. “It was like the beginning of my life. The teacher told the class, ‘I heard a voice today; it was the biggest surprise of my entire career, and I’d like you to hear it.'”

His voice led him to the world-renowned Interlochen Arts Academy and then to the University of Michigan, where he earned a bachelor’s degree in vocal performance with an Italian minor.

“I love to touch people with music,” he says. “It’s a powerful gift for a young person to see people cry. It’s humbling.” 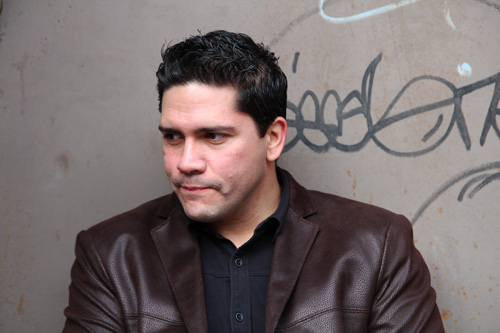 Photo by Nancy A. Ruhling
Aaron in a pensive pose.

Later, he studied in Italy and New York with Maestro Luigi Veccia. “He taught me the real Italian technique of Caruso all the way to Pavarotti,” Aaron says. “This took me all of 10 years to learn.”

In the course of his studies, he learned to sing in seven languages, including Russian, Latin and German, and has come to speak Italian, Spanish and French fluently.

The lessons took: Aaron regularly sings all over the country at performing-arts centers, concert halls and festivals. 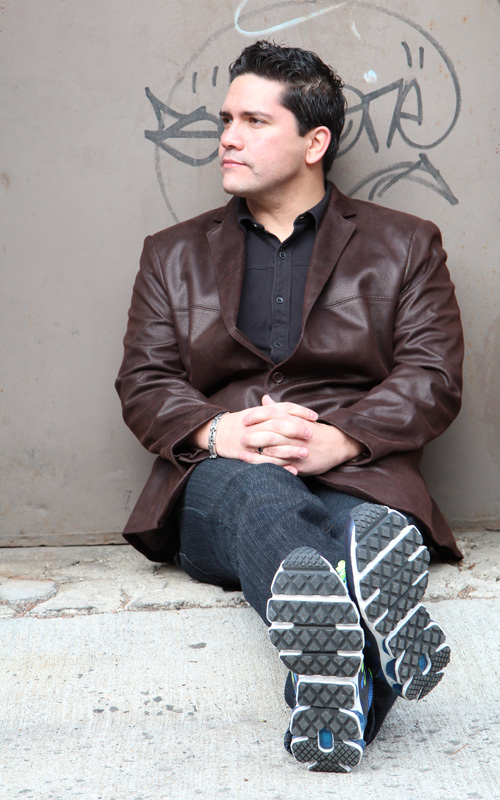 Photo by Nancy A. Ruhling
He hopes the Met’s in his future.

“I don’t have any other job,” he says proudly, adding that he sings at some 80 events per year. “I make my living as a singer. The day I made it was the day I started paying my bills through singing.”

Aaron, who calls his style “Pavarotti meets the Rat Pack,” continues to perfect his technique.

“We all have many different voices,” he says. “The voice is such an amazing instrument that I feel like a mad scientist who does different things with it. Like a painter, I try different colors out. It gives me joy every day of my life.” 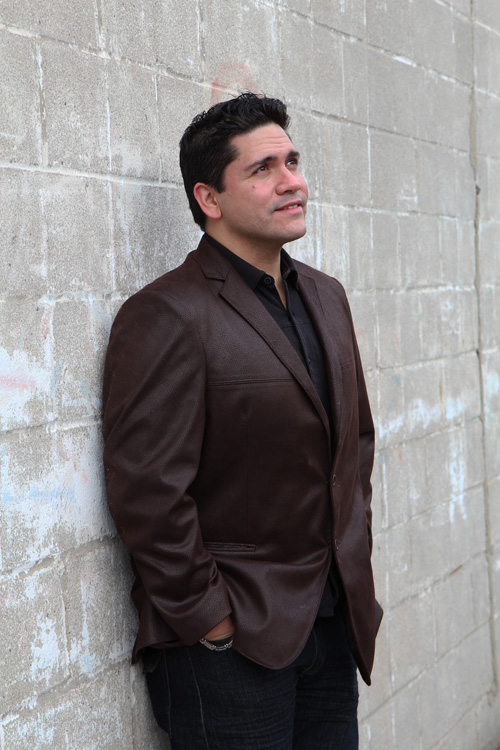 Photo by Nancy A. Ruhling
He sings for the pure joy of it.

When he was 15, Aaron wrote down a list of life goals. Recently, on a trip home, he looked them over and discovered that he’s accomplished many of them. The Carnegie Hall concert, he’s done that; that event, a tribute to Mario Lanza, was sold out. But he’s still waiting for the chance to bring the house down at the Metropolitan Opera, and he wants to sing for America in a PBS concert that’s akin to The Three Tenors series.

Although he was honored to receive the Equestrian Order of the Holy Sepulchre of Jerusalem from the Vatican, he’s not looking for awards or applause.

“If I do what I do well and make the world more beautiful in my own little way, I’ve done good,” he says.