“I always eat a cookie for breakfast,” says Amy Stack. 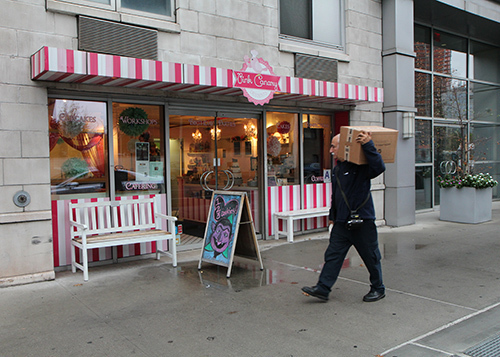 Photo by Nancy A. Ruhling
Pink Canary Desserts is at 13-11 Jackson Ave.

She sets a freshly baked chocolate chip cookie on a plate then adds a raspberry-blueberry-almond scone for good measure.

To compensate for all this sweetness, she takes her coffee black, sans sugar. 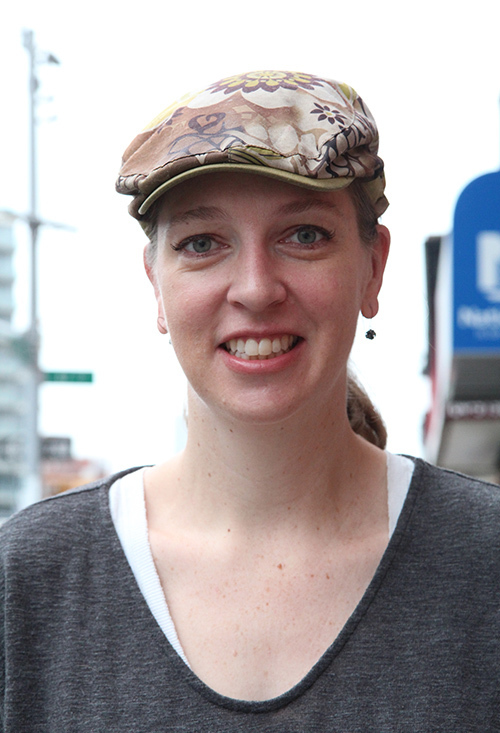 Photo by Nancy A. Ruhling
Amy grew up in a house full of bakers.

“I never eat the whole cookie,” she says. “All the calories are in the last bite, right?”

It’s such a sweet joke that she takes a big bite of the scone. 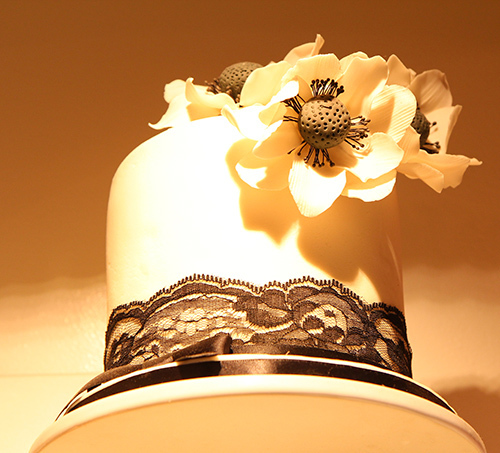 Photo by Nancy A. Ruhling
The shop specializes in custom cakes.

Homemade baked goods remind Amy of her childhood. She was born outside of San Francisco and lived in the Los Angeles area. When she was 8, the family moved to Seattle, Washington.

“Baking has always been part of my life,” she says. “My dad and my grandma were always baking bread and cookies. One of my first memories is of my grandma making crescent rolls.” 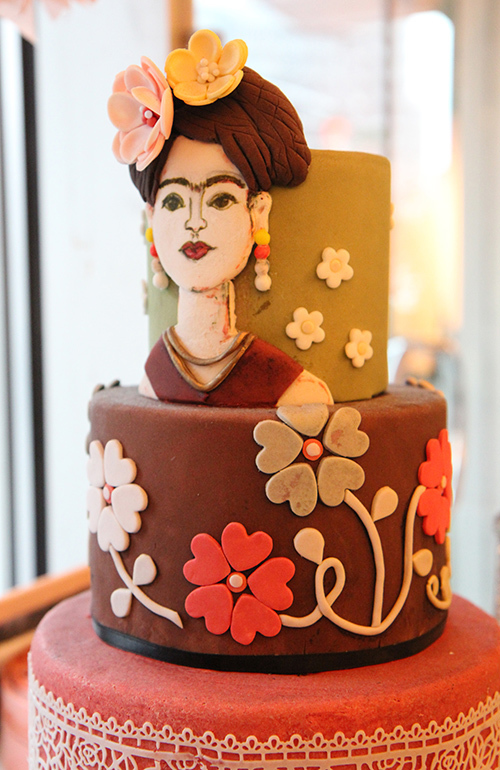 Photo by Nancy A. Ruhling
A three-tier Frida Kahlo cake.

Amy, a tall woman who pulls her hair back in a perky ponytail, is sorry to say that she and her three younger siblings took their treats for granted.

“We always had homemade cookies in our school lunches,” she says. “We felt deprived because we didn’t have Oreos and Ding Dongs like the other kids.”

Amy, a creative soul, carried on the family tradition. 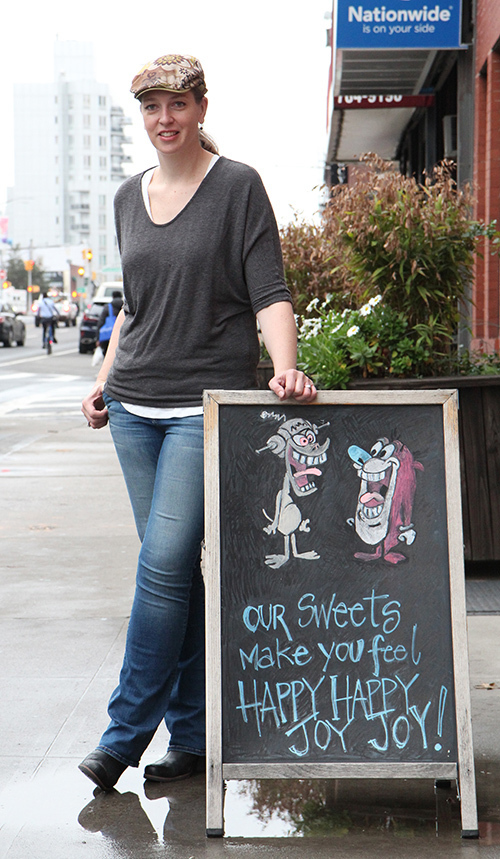 Photo by Nancy A. Ruhling
Amy left a career in mental health to come to the bakery.

“In every professional job I had,” she says, “I was the one who brought homemade baked goods to the office for my co-workers.”

Given her love of baking, it’s somewhat surprising that Amy didn’t find herself standing in front a professional oven immediately. 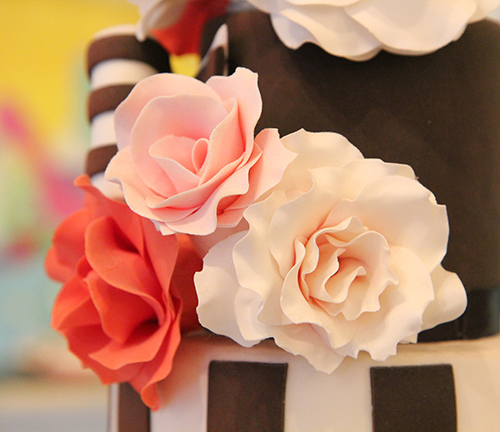 Photo by Nancy A. .Ruhling
A detail of a cake in full bloom.

At Pacific Lutheran University in Tacoma, Washington, she earned a bachelor’s degree in fine art, and at Springfield College in Massachusetts, she graduated with a master’s of science degree in art therapy.

“Baking was a hobby,” she says. “So were the other creative things I did –painting, knitting and crocheting.”

After working in the mental health field for several years and moving to the East Coast (“I came for a job and a boy,” she says. “I married him.”), Amy felt stymied. 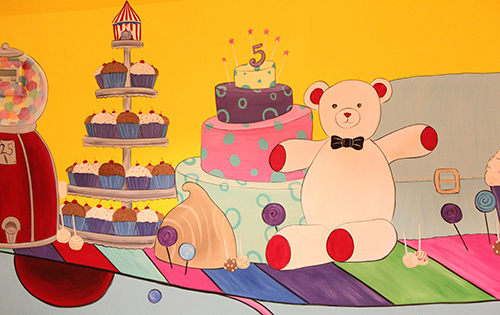 Photo by Nancy A. Ruhling
The shop’s party room features a sweet mural.

“As an artist, I had gotten a little too far away from creating,” she says.

So when her sister entered TLC’s Ultimate Cake Off in 2010 and asked Amy to join the team, she couldn’t resist the challenge. 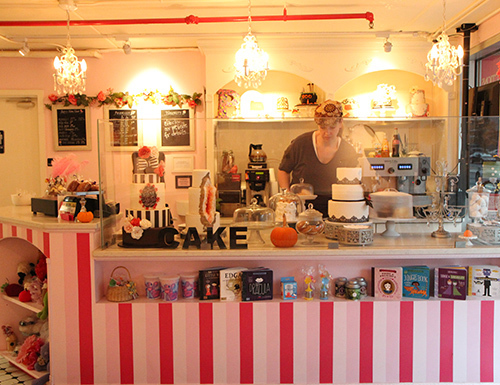 Photo by Nancy A. Ruhling
Pink Canary Desserts is designed to look like an old-fashioned ice cream parlor.

“I didn’t have professional baking experience like my sister,” she says. “And I said to her, ‘Are you sure you want me? You want to win, right?’”

The team’s 6-foot-6-inch-high Sweet Sixteen birthday cake, which was topped by a spinning globe crowned by a castle, took the cake and the $10,000 first prize.

“I did a lot of the sculpting and painting on it,” Amy says, adding that the team had only nine hours to make the cake. 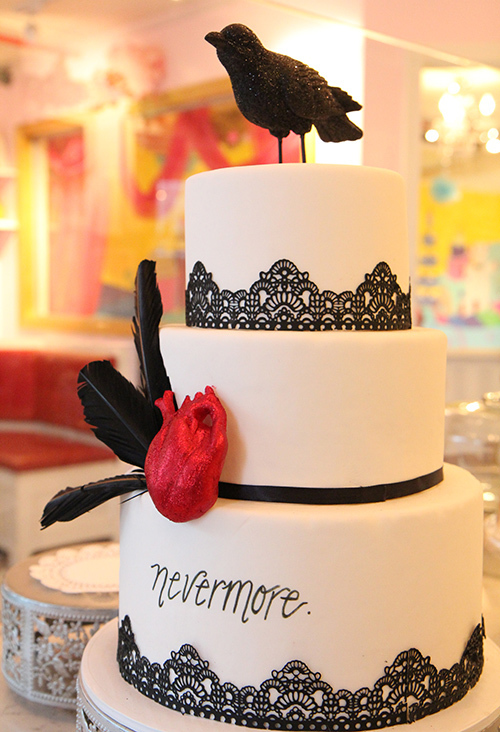 Photo by Nancy A. Ruhling
A cake with a taste for great literature.

The sweet victory made Amy rethink her career, and a couple years later, she quit her job to do a one-month internship in baking.

“My friends started asking me to make cakes and cookies,” she says. “I was really busy for a person without a job.” 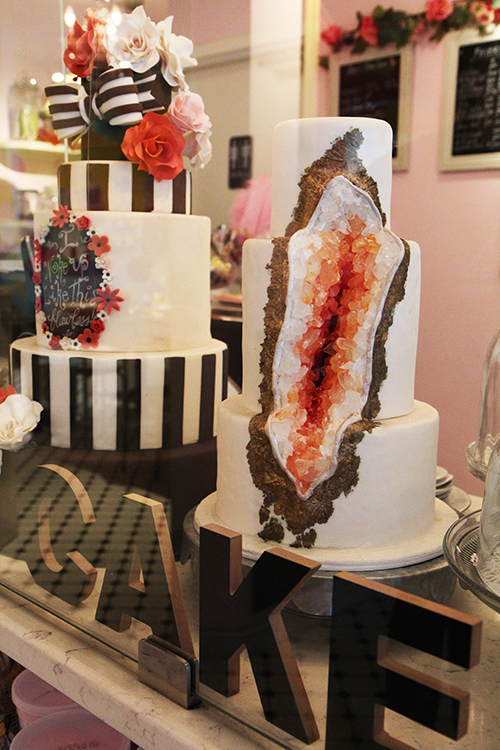 Photo by Nancy A. Ruhling
Let everyone eat CAKE!

For a short time, she worked for Sarah’s Cookies.

She was contemplating a change when she walked by Pink Canary Desserts, which opened on Jackson Avenue in 2014 near MoMA PS 1, and saw a help wanted poster in the window. Eight months later, she was a partner. 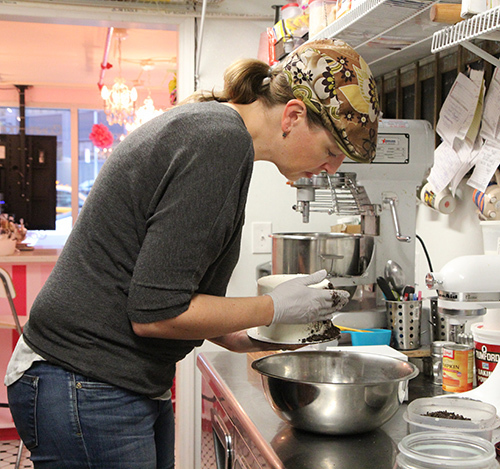 Photo by Nancy A. Ruhling
Amy adds Oreo crumbs to the frosting of a chocolate cake.

​“The recipes come from me, my dad, my mom and my grandma,” Amy says. “We bake everything from scratch in small batches.” 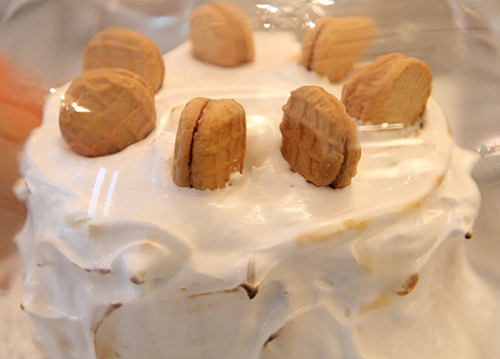 Photo by Nancy A. Ruhling
Nutter Butter cookies decorate a peanut butter and fluff cake that is frosted in meringue.

Pink Canary is designed to be a small operation. 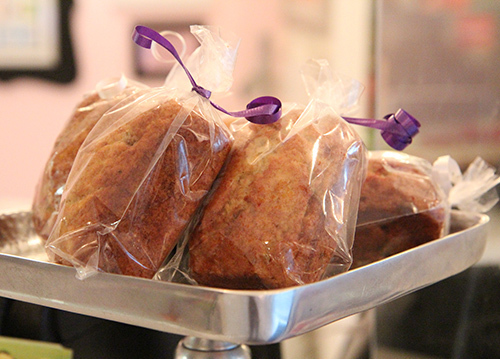 Photo by Nancy A. Ruhling
Mini loaves of banana bread wait at the counter.

The shop, which is pretty in pink candy-cane stripes, has the ambience of an old-fashioned ice cream parlor. Soothing tunes from the 1920s, ’30s and ’40s play in the background.

“I want to become part of the community,” Amy says. “I want the people who come here to feel it’s their place as much as it is mine.”

A customer comes in to pick up a cake that’s a replica of a two-story Shingle Style house in the Hamptons. 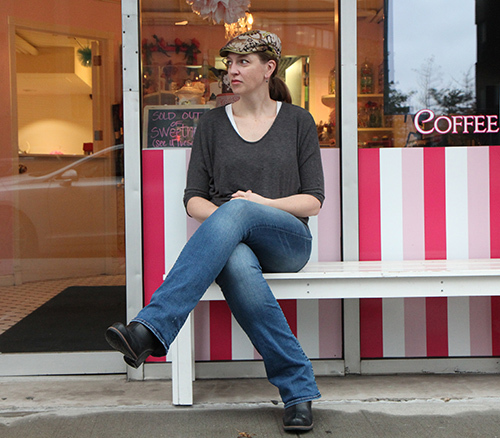 Photo by Nancy A. Ruhling
Amy says her customers are like family.

“I spent the weekend being an architect,” Amy says as she carefully boxes the complex confection.

Then she clears her breakfast sweets from the table. She has to go back to the kitchen. There are cookies in the oven.

Astoria Characters Day: The Second Family Reunion, is Sept. 23, 2018. It is a free, public event.