A coffee cup and pacifier in hand, Jason Greene, who has a quartet of kids, plops himself down on the living room floor, where his 18-month-old daughter, Arwen, is playing with giant LEGO tiles. 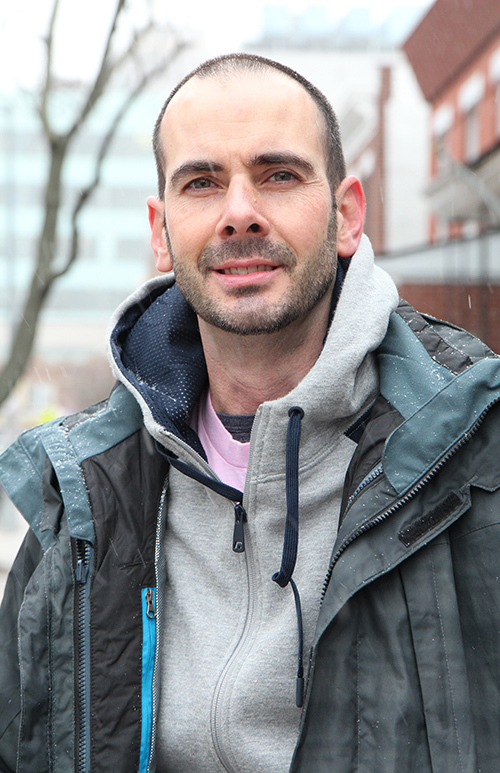 Jason, lanky and laid back, waves good-bye to Cara, his wife, who is off to teach an English as a Second Language class.

Two seconds later, he’s in a chair with tow-headed Arwen on his lap reading her a story.

When she — and he — tire of the tiny tale of My Rubber Duck, they go off to find her bottle. 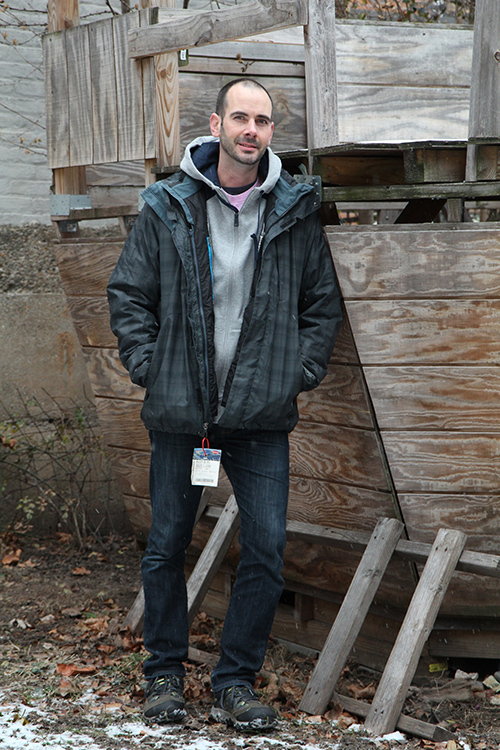 Nancy A. Ruhling
He thought he was going to be an actor.

Their daddy-daughter mission was a success, and while she’s chewing Cherrios out of a plastic container, 5-year-old Corbin, hair deeply tousled by sleep, wanders in to sit on the sofa.

A little while later, 12-year-old Wyatt pops his head out of the bedroom door before burrowing back in for the winter like a groundhog, and Miciah, clad in candy cane-striped pajamas, puts in an appearance. 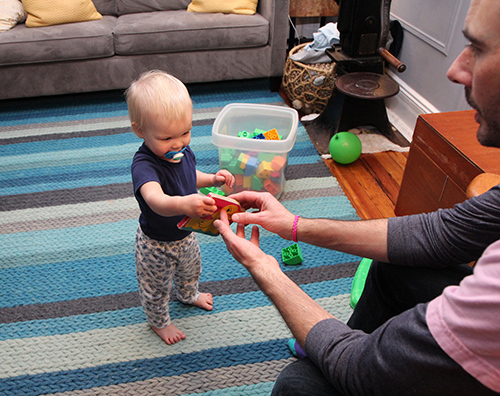 Photo by Nancy A. Ruhling
Daddy, read me a book.

You don’t have to read Jason’s blog to know that he’s One Good Dad.

Jason, who has at various times longed to be an actor, assumed the role of house husband shortly after the birth of Wyatt.

“Cara was going to law school during the day, and I was working at night,” he says. “We used to stand on the subway platform at 59th Street and Lex and pass him back and forth. When she graduated and got a job, I stopped working. It just made sense. We didn’t talk about it; it just happened.” 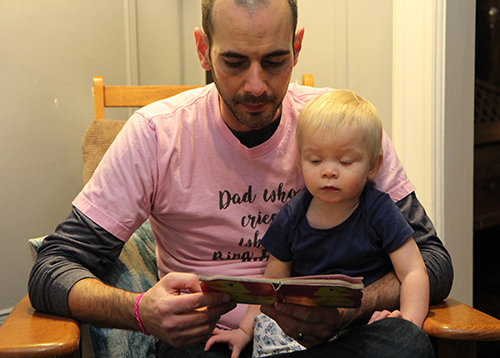 Photo by Nancy A. Ruhling
Arwen’s all ears.

Jason, a native of the small city of Lindsay, Oklahoma, moved with his family to Cleveland, Ohio when he was 16.

“I was not the college type,” he says as he strokes Arwen’s hair. “So I got a job working with mentally disabled adults.” 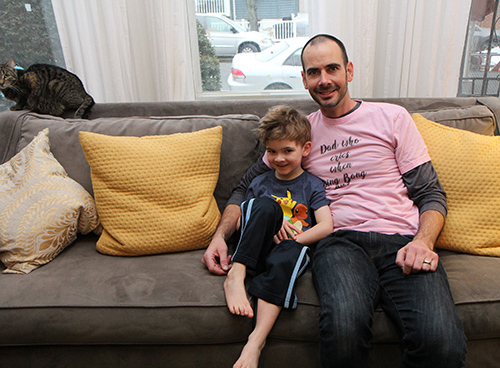 Photo by Nancy A. Ruhling
Corbin and Jason snuggle.

Eventually, though, he earned a degree from Ohio’s Mount Vernon Nazarene University.

“One of my friends went there,” he says. “He was in a very bad car accident, and when I visited him, I met students and teachers from the university.”

To support himself, Jason, a 21-year-old freshman, took a bartending job in a restaurant, which is where he met Cara, who became a waitress during her summer break from Gordon College near Boston. 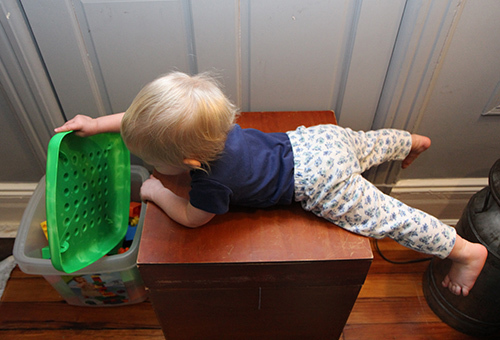 Photo by Nancy A. Ruhling
Arwen goes for the LEGO.

When fall came, she went to Oxford, England to study for a year, and she and Jason parted as nothing more than friends.

They kept in touch, and when she returned, they got engaged. After graduation, they moved to Columbus, where they got jobs. 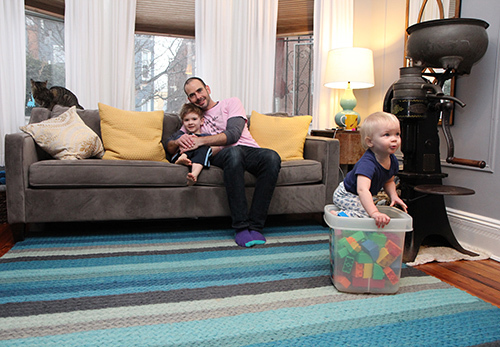 Photo by Nancy A. Ruhling
Things start getting interesting.

“I got the acting bug again,” Jason says. “And I started doing community theater. Cara wanted to go to law school.”

New York City seemed the logical place for them to fulfill their dreams.

“We moved to Astoria right away because it was cheaper,” he says. “And I started auditioning. It was hard. I worked two jobs — at Barnes & Noble and Banana Republic. I was just starting to get traction when Cara got pregnant. She was still in law school.” 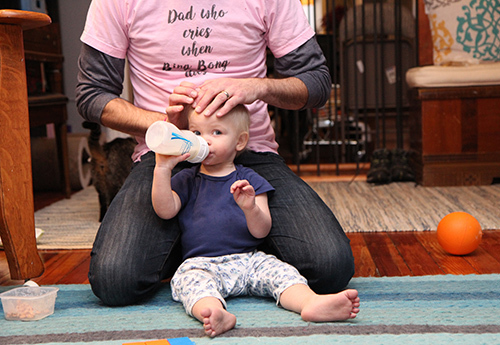 When she graduated, she took a job with Outten & Golden, the employee-rights law firm where she is a partner.

While Jason found full-time fatherhood fulfilling, he still longed for the stage. So he started a website to further that career. 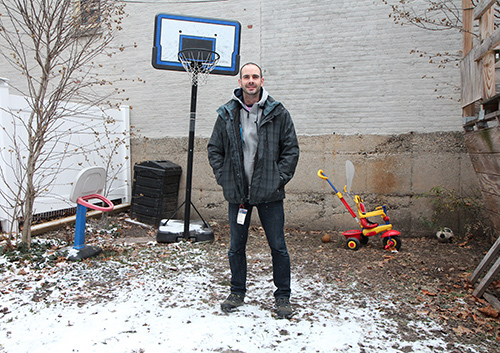 Photo by Nancy A. Ruhling
Jason handles the kids’ after-school activities, too.

But he found himself posting stories about his day-to-day daddy duties.

“I didn’t know anything about blogging,” he says. “I had never even read one. Then, other dads started asking me questions about parenthood, and it just grew.” 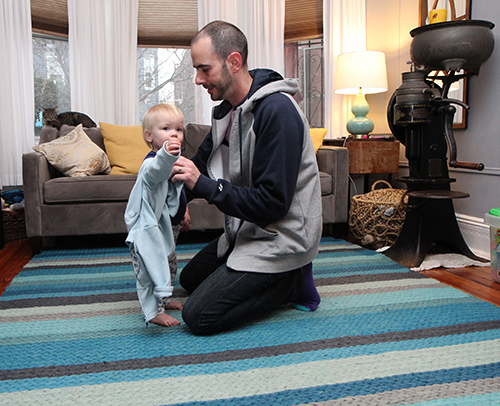 Photo by Nancy A. Ruhling
Daddy gives Arwen a hand with her jacket.

In addition to writing One Good Dad and getting the boys off to school every day, Jason home-schools Miciah.

“I had done the same thing for Wyatt,” he says. “At that time, Cara had travel for work and I was getting opportunities to travel because of the blog. We wanted the kids to see the world. I remember people posting pictures of their kids on the first day of school. We spent one of our first days of school at the Coliseum.”

When the kids come home, Jason routes them to a variety of activities, which include soccer and tae kwon do. 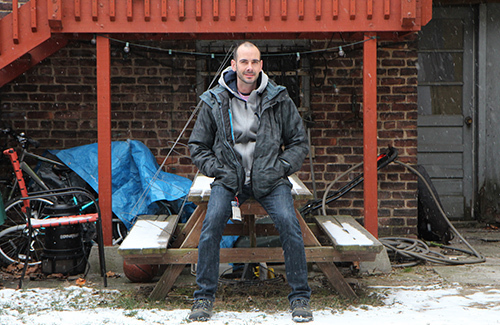 Photo by Nancy A. Ruhling
Jason’s hoping to publish a book on parenting.

Jason knows that he doesn’t have to be with his kids 24/7 to be a fantastic father figure.

“If you put your family above yourself, you will be a good dad,” he says. “I know working dads who are amazing fathers.”

Jason has 500 posts on One Good Dad, and he hopes to turn them into a parenting book. He’s also written a couple of children’s books he wants to get published. 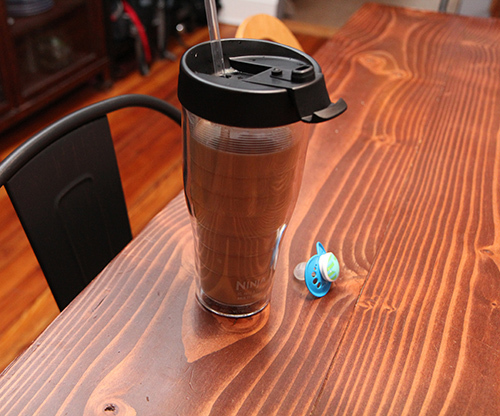 Photo by Nancy A. Ruhling
Jason’s daddy-survival kit: ice water and a pacifier.

Arwen toddles by, and Jason realizes she needs to have her diaper changed.

He deftly does the deed with speed.

“Being a good dad is all about being there when your kids need you,” he says.