Four years ago, I moved to Astoria, the most eccentric place on the planet. On the first day, before the moving truck pulled away, I was welcomed with a Greek good-luck charm. A guy on the street, seeing my open front door, invited himself into my house and threw a quarter up the living room stairs. It bounced down to welcome me to the land of fig trees, $15-haircuts and French bulldogs.

It wasn’t long before I found out that even though Astoria is part of the Big Apple, it possesses a small-town charm that runs from the petals of the plastic flowers enshrined in its front yards to the mom-and-pop shops that peddle whisk brooms and floppy floor mops. 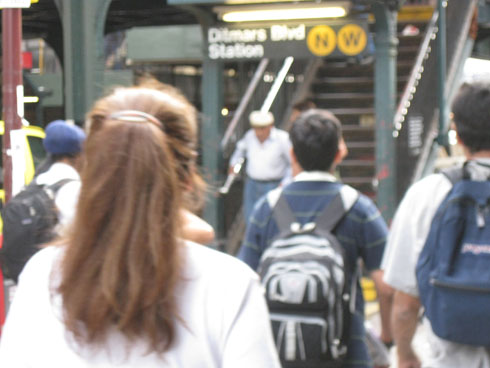 Don’t mistake me; this isn’t Mayberry or even Lake Wobegon. It’s more like Alice’s Wonderland, but you don’t have to go down a rabbit hole to get here. Astoria comes to you, and once it grabs you, it never lets you go.

I wondered whether this was the right place for me. On my mini-UN of a block that houses immigrants from Argentina, Croatia, Italy, Ireland and Greece, some of whom don’t speak English, I didn’t know whether there was room for a born-in-the-USA kid who doesn’t know her ethnic roots. 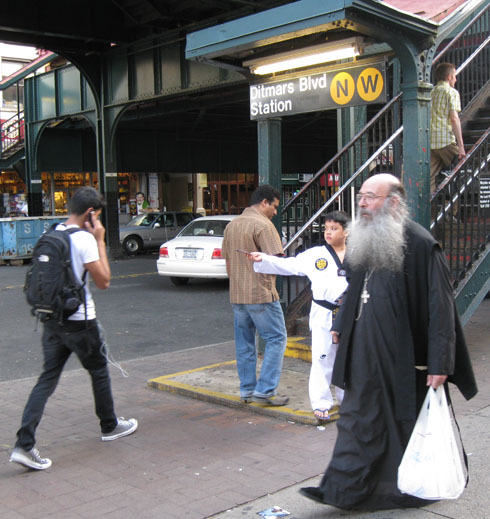 As I sat on my front stoop every day, I watched a kaleidoscope of people parade by. I literally had the whole world at my doorstep: Women in colorful saris, Greek Orthodox priests in long black robes and ancient Italian immigrants were joined by an ensemble cast that included a totally tattooed man, a fellow wearing bright red suspenders, a black top hat and a serious camera around his neck and a blond woman who packed her pampered pooches into a cute little cart and “walked” them around the block on her bicycle.

They waved to me. I waved back. We started saying hello, and when we met in the street, or the “avenue” as the locals like to call it, we chatted as if we were such old friends that we didn’t even have to ask each other our names. So we never have.

With Silvercup and Kaufman Astoria film studios in its back yard, Astoria is Hollywood East, and I became a VIP when Tony Scott filmed the key “bring-home-the-milk” scene of The Taking of Pelham 123 in my kitchen. I’m the only one in Astoria I know of who can say that I had Denzel Washington in my bedroom.

Because of my newfound celebrity, I was in great demand, and it became part of my routine to stop to talk to the undertaker, the real estate agent, the pastry-shop proprietor, the dog walker, the florist, the mortgage banker who sent me a half-dozen baskets of flowers after my closing, the UPS deliveryman, the copy-shop owner, the street book seller and the butcher.

The counterwoman at the Korean market, the one who likes my homemade brownies, greets me with “sarang hamnida” (“I love you”), and when the postman delivers my letters, he rings my bell — once for junk mail, twice for the checks he knows I’m eagerly awaiting.

These are the some of the Astoria characters I have gotten to know, the ones who have made me feel at home and have graciously allowed me to fit right in. And they’re the ones I’m going to introduce to you here.

One day I walked into the corner restaurant and was spotted by a real estate agent. He was dining with his bride and said, “I’d like you to meet Nancy. She’s a real Astoria character.”

And that’s when I remembered the quarter. Yes, it had brought me good fortune. Being considered an Astoria character is, indeed, the greatest compliment.