When Josephine Todaro walks down Ditmars Boulevard, she makes it a sunnier place even on the coldest day. She has her kids in tow. Putting their feet on pavement gives 7-year-old Stefanie and 5-year-old Joseph a new sense of freedom, because up until recently, Josephine has packed them in the car and driven them everywhere.

Now that they’re old enough to walk without wanting to be carried, the sights and sounds of this whole new world so excite them that they charge ahead of her like shiny new subway cars, stopping every few feet to greet and gawk.

Josephine was born here, so for nearly 40 years, this has been her stomping ground.

“Come stai?” she asks the old Italian man who stops her to gossip. “Cómo estás?” she says to the woman she went to high school with. And “what’s up?” she inquires of the Greek real estate agent who never learned his native tongue.

She switches from one language to another like a race car driver jumping lanes right before the finish line. Her people are from Sicily, so she grew up speaking Italian. She picked up English in school — her immigrant parents learned it along with her — and she added Spanish spontaneously. Greek, well, she can get by in that language, too. 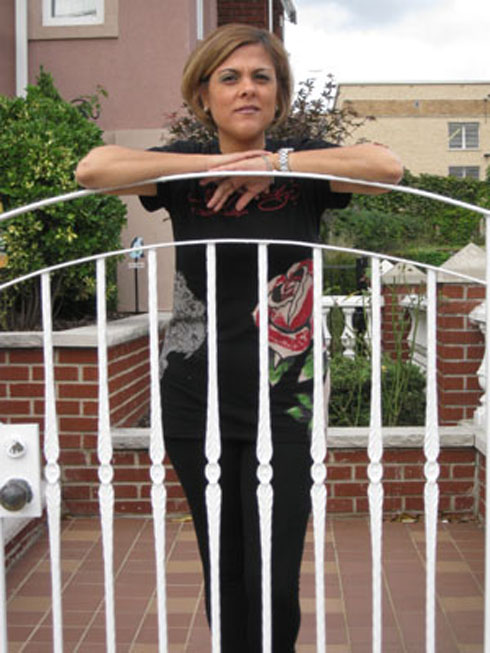 For home-towner Josephine Todaro, the white-picket fence is wrought iron, and life begins behind the gate.

“Not for nuthin’, I’ve never known anyplace else but Astoria,” she says. “When I was young, I was very shy, so shy that I was scared to even walk down Ditmars. But now I know everybody, and they treat me and the kids nice. When we walk in the bakery, you know, they give the kids a cookie.”

Josephine’s whole life, more or less, has revolved around a four-block radius. Her parents settled on 27th Street, and she walked to P.S. 122, P.S. 141 and then St. John’s Prep School. As a teenager, she worked the counter at Rose & Joe’s Italian Bakery, which still is under The El.

She enrolled in Queensborough Community College, which in her mind was a lifetime away in Bayside. When she got married — she met husband Tony, a Sicilian native, in his Long Island City pizzeria — she lived in an apartment off Ditmars then bought a house one street away from her parents and three blocks from her older brother. Its back overlooks St. John’s.

“I wanted to change, but Tony wanted to stay here,” she says. “He grew up in Ridgewood and likes Astoria because it’s the heart of the city.”

Her job as a medical receptionist takes her all the way to Brooklyn, but when she comes home, she and the kids head straight to her parents’ until Tony gets off work. “We cook together, we help the kids with their homework, and then we go home,” she says.

Josephine is as bubbly as French Champagne, as cute as a button and as neat as a pin. People tell her she’s a ringer for Posh Spice.

She may stay close to home, but she turns everything into an in-house adventure. Her living room becomes a home theater when the DVDs are turned on, and the kitchen converts to a cooking school where family and friends prove that there is no such thing as too many cooks.

When Josephine wants to escape, she gets in the car and heads upstate to her parents’ vacation home. On the return journey, though, she becomes Dorothy, more than ready to retreat to her own odd Oz.

“I don’t think there’s anything unusual or different about Astoria, not even the plastic flowers in the yards, but that’s because it’s the only place I’ve ever known,” she says. “I’m used to it.”

Astoria may have everything, but Josephine sometimes can’t help but long for something more. She doesn’t wear her heart on her sleeve; she’s far too street-cool for that. But there is a tiny butterfly tattooed at top of her left arm, and it’s poised for flight.

“I wish I had experienced life a little more, you understand? You know, I’d like to have broadened my horizons,” she says. “And I want my kids to get out into the world more than I have.”

Josephine gets a dreamy, far-away look in her eyes, which are the color of the cappuccino she craves. “Sometimes I think that I’d like to move,” she says. “I’ve thought about going to Long Island, or even Upper Ditmars, where the houses are not attached. But everyone I know who has left Astoria always comes back.”

Joseph and Stefaine, giggling their giddy heads off, run to the front yard, and Josephine follows. She closes the white wrought-iron gate tightly to keep them in. Then she hugs them to her heart.