“A great frame always excites me,” says Eli Wilner as he holds a gorgeous gilded example up to frame his angelic face. “I’d rather see a great painting with no frame than with the wrong frame.”

In Eli’s world, frames are, indeed the big picture. For the nearly three decades that his Astoria-area frame restoration studio and Upper East Side gallery have been in business, he has devoted himself to bringing fame to the frame. In that time frame, he has gotten the art and antiques world to recognize that 19th and 20th Century frames are fine art and deserve the same respect as sculpture.

“Look at this frame,” he says, his eyes twinkling. “Look at the composition, the detail and surfaces. Why would anyone even think of putting anything inside it?”

Eli certainly wouldn’t. He got hooked on the curvaceous carvings of frames when he was seven. “I always wanted to be an artist. In fact, I have a master’s degree in fine art, and I thought I was going to be a painter,” he says. “When I did my first paintings, my great-uncle hung them in antique frames and put them next to his Chagalls and Modiglianis.”

When Eli started collecting frames in his late 20s, everyone thought he was crazy. “The idea was dismissed with sarcasm and derision,” he says. 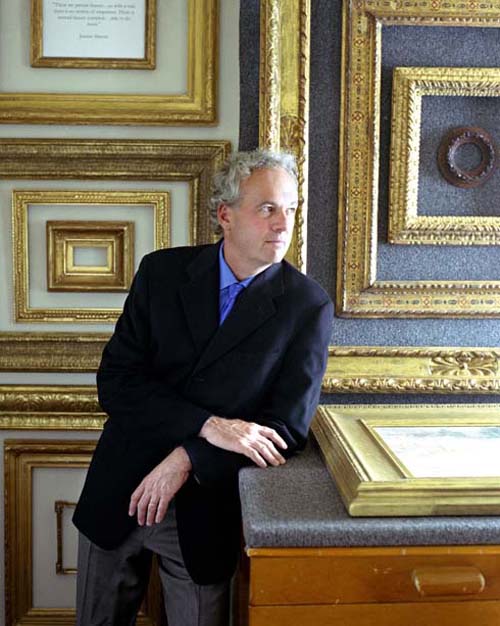 For Eli Wilner, the frame is the name of the game.

And why not? Major museums, including the Metropolitan, were tossing 19th and early 20th Century frames into the trash and replacing them with contemporary ones.

“I used to take a taxi up and down Museum Mile in Manhattan and rescue them,” Eli says. “Some of them were signed by famous artists who had designed them for specific paintings. I couldn’t figure out why no one else valued them.”

Soon, his apartment was crammed with so many frames that he didn’t know what to do. So he started hanging them on the walls empty, one inside each other, and turning them into mirrors, trays and even room dividers. It wasn’t until one of them fell off the wall and hit him on the head while he was sleeping that a light bulb went off in his brain and his bright idea was born.

He’d sell them as art! Why hadn’t anybody thought of that before? So he gave up his day job — he was a framer for a Manhattan art gallery — and in 1983 set up shop as Eli Wilner & Co.

Before long, he got clients to collect them, and soon the same museums that had discarded them were begging to buy them back, sometimes paying tens of thousands of dollars for the privilege. Today, Eli’s replica frames start at $3,500, and the antique ones begin at $10,000.

He had so much business that he set up shop here, becoming one of the first in the design industry to discover the Astoria area. Eli’s glamorous sales are made in Manhattan, but the gold-leaf work is done across the East River.

Through the years, Eli became the framer of choice for the nation’s leading museums, including the Smithsonian; Sotheby’s and Christie’s auction houses; and historic homes, most notably the White House, where he reframed 27 paintings and restored one vintage frame. And in 1990, he carved out another first for frames: He sponsored a frames-only exhibition at the Met that won him serious praise and recognition.

His Astoria-area studio recently finished his largest project: The re-framing of Emanuel Leutze’s iconic 1851 painting “Washington Crossing the Delaware,” which will be unveiled in 2011 when the Met opens its new American Wing.

It took a dozen workers nearly two years to complete the 3,000-pound replica frame for the 12-foot by 22-foot painting. “We only had a black and white photo taken by Matthew Brady in 1864 to go by,” Eli says. “The photo wasn’t sharp, so we had to do extensive research on all the carved objects, which include tassels and muskets with bayonets.”

Eli’s claim to frame has been in the American market. But he’s not ready to rest on his laurels, even if they are gilded. “I still have lots of work to do,” he says. “I’m going global — I want to frame the whole world.”