Dressed in her loose-fitting uniform, Hee Jung Jang goes to the head of the class and bows deeply.

The dozen yoga students return her greeting then gather in a circle as Hee Jung leads them in warm-ups. Knees bent, they tap their abdomens 1,000 times to get the blood flowing then pace themselves for the intestinal exercises. At her direction, they move their abdomens in and out. It sounds easy, but it’s tough. Try it 1,000 times. You won’t like it. Neither do they. They grunt and groan, but they know the pain will bring gain. This exercise may help them lose weight and ease constipation.

“Do you feel the warmth in your abdomens yet?” an exuberant Hee Jung excitedly asks.

“YES!” the sweaty students shout in union and in the hopes that she will proceed to the less strenuous stretches.

“CONGRATULATIONS!” she shouts back, beaming.

They smile. “Smile with teeth,” she tells them. “Smiling will change your energy, and it will feel easier.” 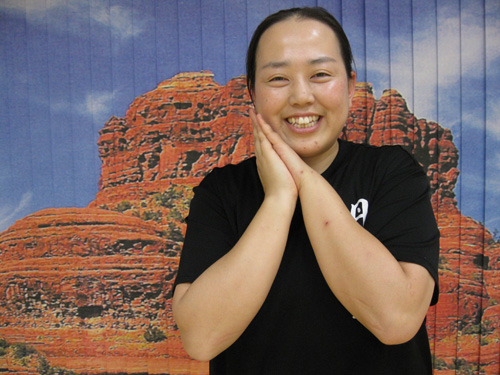 Photo by Nancy A. Ruhling
Hee Jung Jang strikes a happy pose at the yoga center.

Hee Jung works for Astoria’s Dahn Yoga center, which has nothing to do with ladies in leotards performing pretzel poses. Founded in South Korea by Ilchi Lee some three decades ago, it is a spiritual practice dedicated to the betterment of brain and body; its format is monkey posture meets meditation.

Whoever chose the location must have been a practical joker, because it’s between a honky-tonk and a recently deceased funeral home. It certainly wasn’t Hee Jung, because the center just turned 4 and she’s only been here 1½ years, but it suits her sense of humor.

Hee Jung, who is a little shy and sly about her age and will only say that she is thirtysomething, has been practicing Dahn Yoga for a dozen years and has been an instructor for a decade. She’s tall and keeps her long black hair rolled in bun topped by a perky bow. The distinctive hair ornament bobs up and down like a downward-facing dog’s wagging tail when she goes through her routine.

She didn’t plan this life or this location. The universe took her on this journey to bring her joy.

Growing up on a farm in South Korea’s Kyung Sang State, she was an unhappy, unhealthy child. “When I was born, I was sick with a heart problem,” she says. “And when I was six, I had a stroke that left my face twisted. The doctors gave me medicine and wrote notes to my school saying I couldn’t exercise. And every day I thought I was going to die.”

Because she couldn’t help herself, she decided to dedicate her life to others. After earning a degree in social work, she worked with disabled children and then the elderly.

“There was only one other person working in the nursing home who was my age,” she says. “The place was at the top of a mountain, and even though it was near a city, there was nothing to do. We decided to do yoga and chose the Dahn center because the person who answered the phone had such a nice voice.”

After a month, the yoga made her feel better and within six months, she decided to make it her life’s calling. “It was a turning point in my life,” she says. “It helped me find hope in my heart, and if this didn’t happen, I would have continued to be sad. Suddenly, I wanted to live, and to do that I knew I had to be stronger physically and mentally.”

Becoming a Dahn Yoga instructor requires commitment to a disciplined lifestyle. Hee Jung trains for one to two hours a day. In between group classes, she holds private sessions, which means that some of her workdays can start as early as 7 a.m. and others can end as late as 10 p.m.

“Because I am focused on my on work right now, I don’t have time for a husband or children,” she says. “Marriage is a very big part of Korean culture. All my brothers and sisters are married, but my parents understand my commitment, and they know that someday I will meet the right person.”

Before coming to Astoria, Hee Jung worked at centers in South Korea, Chicago, Seattle and Los Angeles. “I have been living away from Korea for 10 years,” she says. “I miss my country and my family sometimes, but we talk on the phone and we are very close and when possible they visit. We connect more than we ever did when I lived there. I also feel that the students and the other instructors are my family.”

The transition to American life wasn’t easy. She didn’t speak English and had to learn it on the yoga mat. “I was so scared that instead of speaking I cried,” she says.

She’s still concerned about her English. She may not know every word, but her witty jokes prove that she aces the test of the tongue.

Hee Jung doesn’t know how long she will be working at the Astoria center, but she’s excited to follow her future. “I want to keep doing this,” she says. “In fact, I see myself teaching Dahn yoga in a city in Europe someday. This is not just a job. I’m connected to it with my heart.”

The class over, she hugs each student. Alone, she watches at the front window as everyone else walks off into the night. And she smiles – with teeth.