Hands folded reverently over his chest and eyes cast respectfully downward, John Hoey stands guard in the doorway of the O’Shea-Hoey Funeral Home like a linebacker ready to tackle the Grim Reaper.

John’s family has been in the business of death since long before he was born, so this poker-face pose comes naturally. His father bought the Ditmars Boulevard funeral home, which laid its first body to rest in 1927, from the O’Shea family in 1967. John joined the business as a part-time John-of-all-errands when he was in high school.

Photo by Nancy A. Ruhling
John Hoey is the guy nearly every body knows.

“It really bothered me the first time I worked with a body,” says John, who with his wavy hair and electric blue eyes looks a lot like Jack Kennedy. “I was very timid, and I couldn’t get it out of my mind for weeks. But after a while, the weird clammy feeling went away, and now it doesn’t bother me. It’s actually sometimes harder dealing with the living because they are in shock and grief-stricken.”

After earning an associate’s degree in mortuary science from SUNY Farmingdale, John, like his father, undertook the undertaking profession, working for a number of funeral homes in Queens and Manhattan. It was death that called him back to O’Shea-Hoey when his father passed away unexpectedly at age 54 while on an international trip.

“I was only 23 when I took over,” John says. “I’m a one-man shop, and I’m on call 24/7. I do everything from putting the obits in the newspaper to embalming the body.”

Undertaking is a mysterious profession, and John spends a lot of time answering curious queries about what it’s like to work with the dead. It’s a job that requires a special type of devotion.

John, a veteran of more than 2,000 funerals, picks up bodies from hospitals and houses in his new fire-engine red Dodge Caravan. “I bought the stow-and-go model,” he explains.

A trap door in the funeral parlor’s main floor conceals a lift, which takes the bodies to the basement, where there are two stainless steel tables and cabinets filled with embalming fluid. The space has a faint chemical smell that John has become accustomed to.

“Each body takes about two hours,” he says. “I never get lonely because I listen to rock and roll or sports on the radio.”

Aside from John, the charm of O’Shea-Hoey is that, other than the lift John installed, it hasn’t changed much. The old-fashioned viewing parlor, which can accommodate 70 grieving people, has two 1920s stained-glass skylights, soft-color lighting to flatter the corpse and an iconic wooden and brass crucifix.

“I only do one funeral at a time,” John says. “Unlike a lot of bigger funeral homes, the same person — me — does everything from start to finish. And I give 100 percent of my attention to each client.”

Over the years, John had added some personal touches. There’s a stained-glass shamrock in the front window that represents his Irish-Catholic heritage, and the table by his desk is filled with trinkets from clients and from his travels to Europe. 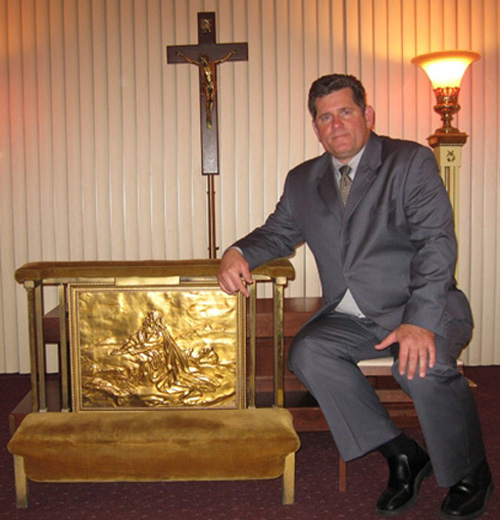 Photo by Nancy A. Ruhling
As was his dad, John is the undertaker and caretaker of O’Shea-Hoey.

As he speaks, the crypt-like quiet is broken only by a pair of cockatiels, whose squawks almost are loud enough to wake the dead. “People always ask me about ghosts and about things that go bump in the night, but I’ve never seen or heard anything out of the ordinary,” he says. “And I, better than anyone, would know because I live upstairs.”

But things aren’t what they used to be. “It’s a dying profession,” John deadpans. “The traditional funeral is not what people want any more, and there aren’t many old people left in Astoria because many of them have moved to retirement homes in sunny places like Florida. Last year I did 90 funerals; so far this year I’ve only done 60.”

If there’s one thing being an undertaker has taught John it’s that you never know what’s going to happen in this life. You can walk out the door and be hit by a city bus on Ditmars Boulevard or have a fatal heart attack while eating your bacon and eggs at Mike’s Diner, so you have to live each day as if it’s your last.

Perhaps that’s why John is no stranger to taking chances. He used to love to sky dive, and there’s a photo in his office of his running with the bulls in Pamplona. Of course, he was younger when he did these things. Now, at 47, he prefers to ride his Harley, letting the wind whip against his face.

“Some people would think these are high-risk activities, but you only get hurt if you don’t know what you’re doing,” he says. “And I know exactly what I’m doing.”

John has seen his score of family feuds that even death cannot end. His grave philosophy is: Bury the hatchet before you bury the body.

When his time does come, John will be laid to rest in the family plot in Mount St. Mary Cemetery in Flushing. And the visitation will be at the O’Shea-Hoey Funeral Home.

“I want to set an example for the community that I’ve served my entire life and have a traditional funeral,” he says. “Cremation is not for me.”