When the DVD starts, so does the laughter. Anastasios Makedon must have watched this, his first film, a million times, but every time he sees himself playing himself in this screwball comedy of house-hunting errors, it cracks him up.

“This came out much better than I expected,” he chuckles. “Every single thing in the film is true, and everything is drawn from my experiences as an Astoria real estate broker.”

OK, there may be a bit of an exaggeration or embellishment here and there, so if you don’t take him literally, take him seriously while you’re giggling and guffawing through the two episodes of “The Affordable Apartment.”

But first lets get the credits right. Don’t call him Anastasios. “People always ask me what kind of a name that is,” he says. “And I tell them, ‘It’s Greek to me, too. Just call me Taso.'” 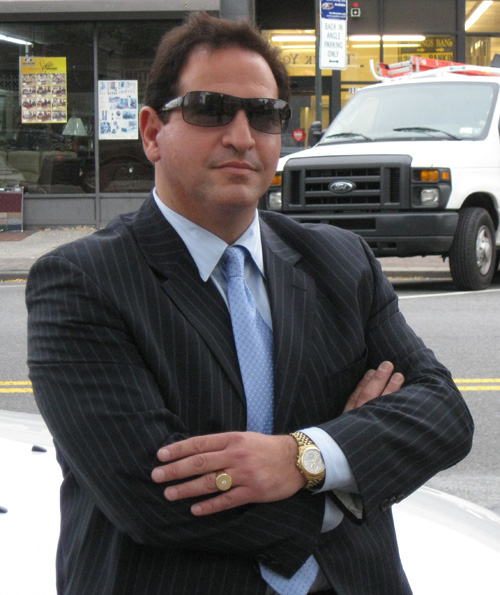 Photo by Nancy A. Ruhling
Taso can see all the way to Hollywood through his shades.

Ha, ha, ha! Hee, hee, hee! Get it? Greek to me? Taso is nearly rolling on the floor he’s so pleased with this perpetual pun.

Taso, the owner/broker of the real estate firm Astoria Apartments and the movie-production company Maximum Exposure Films, spent five months and – don’t tell his wife — please! – somewhere south of a million of his own money to write and executive produce “The Apartment From Hell” and “The Toilet of Tomorrow.” He’s anything but a big shot, but for the big shoot, in his quest for the best reviews, he hired an Emmy-winning director, a professional crew from CBS and a cast that includes the Greek comedian Basile, who, as Taso’s sidekick, becomes the butt of the best jokes. (To see the trailers, go to http://maximumexposurefilms.com/videos.html.)

Soon, Taso hopes he won’t be laughing alone. The 30-minute films, which he wants to turn into a full-length movie as well as a TV sitcom, are making their debut at the Queens International Film Festival (http://www.queensfilmfestival.com/festival/) on Nov. 14 and have been submitted to a number of other festivals, including Sundance.

It’s not such a far-fetched dream. Taso used to be the CFO of a division of Vivendi Universal before it was sold and became NBC Universal. “I got very close to optioning a comedy to Miramax that was ‘My Big Fat Greek Wedding’ meets Donald Trump’s ‘Apprentice,'” he says. “I also sent the script for a drama to Mel Gibson, but in the end, neither deal worked out. I was told that the best way to get noticed was to make the films, so this is what I have done.”

Instead of looking for another job in corporate America, he fell back on real estate because he figured a flexible schedule would give him time to work on his films. He has had a broker’s license since 1984, when he sold houses while going to college, and he opened Astoria Apartments in 2005.

It wasn’t a fluke that he started a new life; he wasn’t named Anastasios – in Greek it means “to be resurrected” – for nothing. “The doctor told my mother I was stillborn,” he says. “I was put in a coffin and saved when a nurse noticed me twitching. So I literally rose from the dead.”

In “The Apartment From Hell” and “The Toilet of Tomorrow,” which were filmed in Astoria and in his office, a flashy fortysomething Greek real estate agent and playboy named Taso and played by Taso has hilarious adventures with looney landlords and wacky tenants.

“The character Taso is, of course, based on me,” Taso says proudly. “I’m not a womanizer, but I decided to make him one because these basically are chick flicks. I wanted to also appeal to a male audience, and the screen Taso is every guy’s fantasy, including mine. Besides which, I had a lot of fun playing him.”

On and off screen, Taso is a charmer whose Greek-god good looks would win him a place in the Parthenon if not in a runway-model’s bed. 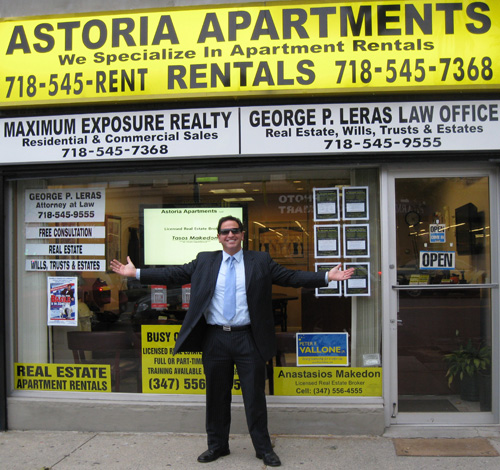 Photo by Nancy A. Ruhling
Taso makes a larger-than-life impression in real and reel life.

To make the funny films was no laughing matter. During the dozen days of filming, Taso tore apart his shiny-new silver BMW and ripped its front fender off for the cameras. He allowed himself to be chased by a knife-wielding maniac and scared to death by Bruce the Brute, a killer Doberman pincher.

Taso has been a fixture in Astoria for decades. He came to this country from Athens, at age 4, and his family eventually ended up in Astoria, a Greek enclave.

Taso has a good feeling about his two films. Ever since he was blessed by the Greek patriarch, Bartholomew, on the pope’s 2004 visit to the New York Metropolitan Museum of Art, things have been going his way. “The blessing brings eternal good luck and good health,” he says.

As for the real estate gig, Taso and his cinematic twin have no intention of giving it up.
The moviemaker is interrupted when a young woman walks into the office looking for an apartment. She wants room for four – herself, two cats and a small dog. Taso, sensing a good plot line, flashes an Oscar-winning grin.

“I’m getting tons of great material from landlords and tenants,” he says as she innocently fills out paperwork. “Another short Odyssey is about to begin.”