It never would have happened if she hadn’t told that one little white lie.

Betty Deudon can’t really be held responsible. After all, she was only a schoolgirl standing on the sidewalk by Long Island City High with a classmate when the handsome French sailors, their red-pomponed hats rakishly askew, strode by.

“Let’s pick them up,” Betty told her girlfriend.

She smiles at the memory. “I didn’t speak French, but my friend did, and when they asked me how old I was, I said 16. I was really only 14.” 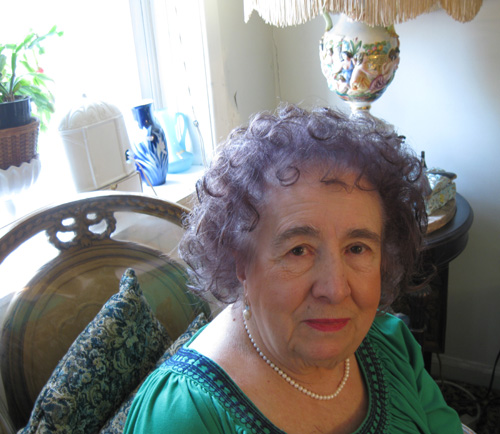 Photo by Nancy A. Ruhling
Betty’s story starts when she was a schoolgirl.

Betty, a pint-size powerhouse with a velvet voice, shakes her head of violet hair that’s done up in a delicious bouffant like cotton candy. What had she been thinking? Her dangly pearl earrings, the ones that match her necklace, dance, mirroring her amazement.

It was World War II, and the sailors were in town while their ship was being repaired.

“It’s not that I was wild,” she says, her brown eyes opening as wide as saucers in mock horror. “I’d never even had a boyfriend before. Two of them who were on the same ship started writing me love letters. I had to have the French teacher at school read them to me. That’s if I could get them. My parents took them away, and if my younger brother, Ronnie, got them, he hid them and charged me a nickel for each one. Who had a nickel back then? Then he raised the price to a dime!”

Betty’s parents, who left Bari, Italy for America when she was a year old, had very definite ideas about courtship. They wanted Betty married off as soon as possible so she wouldn’t get in trouble; the sailors had the same idea. So when they made her choose between them, Betty picked Robert Deudon.

“He looked like Kirk Douglas,” she gushes. “And his letters were very artistic. He always put in a dried rose or pansy. And he had magnificent handwriting — it was European script.” 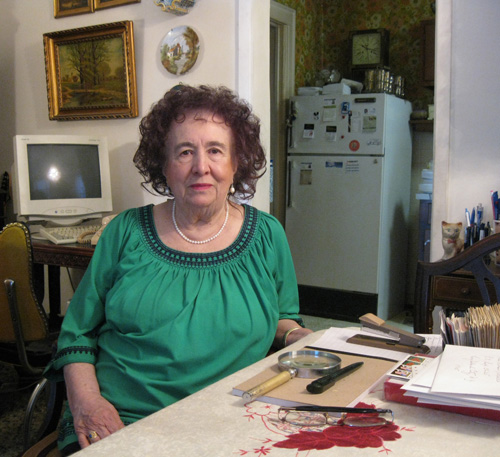 Photo by Nancy A. Ruhling
Betty has lived in the same house since after her marriage.

Betty didn’t think much about the future; she was a happy-go-lucky girl who had her whole life ahead of her.

When she graduated from high school, she got a job at MW Houck, a grocery wholesaler. When the war ended, she got a telegram: Deudon, eight years her senior, was coming to New York City to make her his bride.

“I didn’t want to marry him,” she says. “I was meeting lots of men at work, many of them wealthy, and I was interested in going out with them. And I had actually met someone else I liked. Robert and I didn’t know anything about each other; we didn’t even speak the same language!”

On their one and only date, Betty’s parents chaperoned.

“We went to the movies,” she says. “I don’t remember the picture we saw. We were married two weeks later, on Bastille Day, and moved in with my parents.” 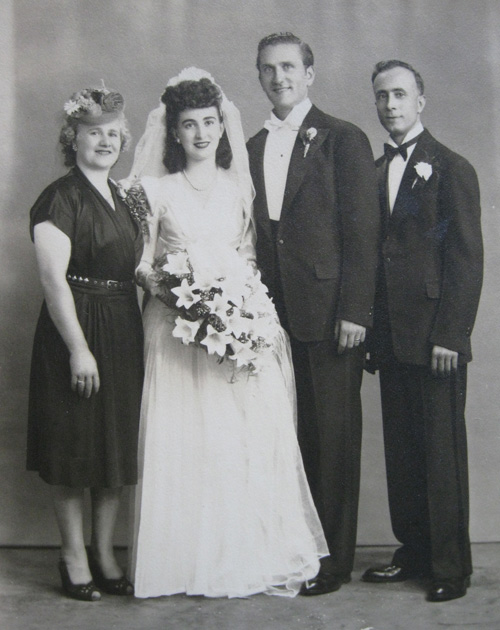 Photo by Nancy A. Ruhling
Betty as a blushing bride.

She was unhappy — it wasn’t that Robert, whom she always called Bob, treated her badly — OK, he was extremely jealous and didn’t like it when all those other men asked her to dance with them — but it was just that she was only 18. At 19, she had a son, and they bought a two-family house, the one she still lives in.

“We were Catholics; we didn’t believe in divorce,” she says, adding that she learned French and Robert learned English from each other. “I didn’t like his French accent, but I got used to it. It took me about 10 years to accept the fact that this was my fate.”

“Even though I was retirement age, I wanted to keep working,” Betty says, adding that she was with Houck for more than four decades. “But when my mother started to fail, she didn’t want anyone else to take care of her but me. So I had to quit. I took care of her all by myself for five years.”

Betty, who has the elocution of a 1940s stage star, is a born storyteller. It’s no wonder that she remembers everything that has ever happened to her. Her house is filled with many furnishings that remind her of her family’s history. There’s the mahogany buffet that her father, a cabinetmaker, designed in the 1940s. It has a pull-out dining table that she’s never had to use. There are the 19th-century sideboard and bronze bird, heirlooms. 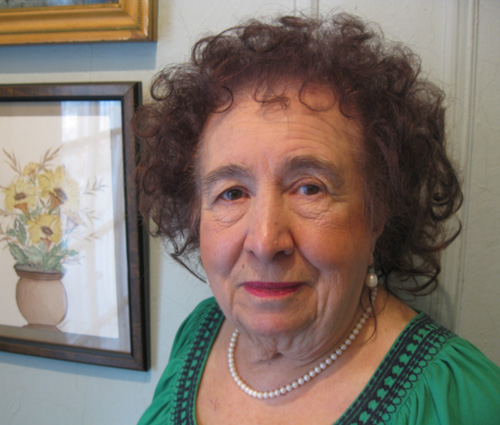 Photo by Nancy A. Ruhling
Betty is proud to say she was a career woman.

Betty had always loved these two pieces. They originally belonged to her father-in-law then were passed down to her brother-in-law who lived in Paris. Betty had to go all the way there to get them. It was several years ago. She and her brother-in-law used to talk to each other every week, and when he didn’t phone for a month, she found out he was dying.

Betty, a white-knuckle flier, had only been to Paris once before — to meet her in-laws shortly after her marriage. She enlisted a cousin to go with her, reaching her brother-in-law’s bedside just in time to watch him leave this world.

She tells a riveting tale of tears and intrigue that includes veiled threats, a missing will, ransacked rooms, purloined possessions, revengeful relatives and re-established relationships.

“My two grandchildren were finally declared the rightful heirs,” she says. “And in case anybody wonders, I do have a will, and it’s in a safe place.”

These days, Betty volunteers with the board of elections and takes trips with her church group at Immaculate Conception.

“We go to New Jersey to hit the casinos about once a month,” she says, adding that she generally plays $500 to $600 each time. “I like to play the slot machines; you get a high when you win, and when you lose, so what?” 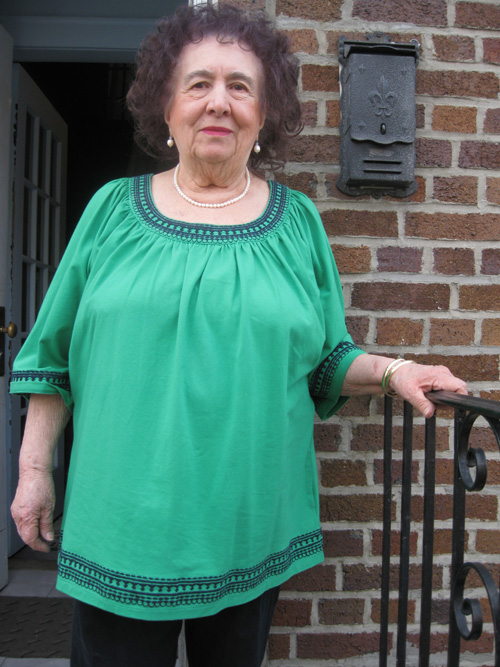 Photo by Nancy A. Ruhling
Betty stands on her own: She doesn’t need another husband.

She spends most of her weekends cooking for her brother, Ronnie, who comes in from Bayside. “Everybody loves my lasagna,” she says. “It takes a long time to do because I make it with meatballs the size of dimes.”

There’s no sense talking about what would have happened if Betty hadn’t wanted to woo those strapping sailors.

“I just wish I had waited until I was 23 or 24 to get married,” she says, adding that she’s not, she repeats NOT, looking for another husband. “My husband was a superb provider, but I had a good job, and I could have taken care of myself.”

Betty may not be 14 any more, but her little white lie has aged as well as she has.

“I’m 79,” she confides like a schoolgirl. “But I don’t admit to it. I tell everyone I’m 70. Everyone thinks I’m younger anyway, so why not play the game?”