“Shoe Repair & Shine.” That’s what the sign says in big, snow-white letters. But it’s probably been there since Kennedy was president; no doubt the owner never bothered to update it.

After all, who shines shoes any more? Open the old wooden door, and there’s Gonzalo Zhicay vigorously buffing the knee-high boots of a young woman as she sits on a wooden throne, her wedge heels propped up on shiny brass stands.

There’s a rhythm to his work; back and forth, back and forth with the soft blue cloth flashing like lightning. Five minutes later, her boots are spit-polish clean. 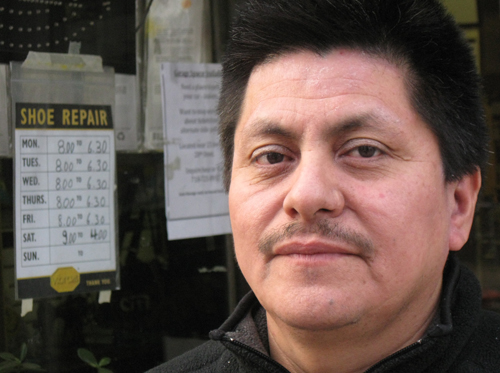 Photo by Nancy A. Ruhling
Gonzalo started shining shoes at 11.

At $3 a pair, Gonzalo doesn’t make much money shining shoes, but he’s the only cobbler in the neighborhood who still does it. He has lots of customers, including a bunch of police officers, who come to sit a spell in his shoebox shop for this service.

His name isn’t on the sign, but it is on his business card, which proclaims that Zhicay Shoe Repair is open six days a week.

Gonzalo, who has fiery eyes and a cockscomb of hair the color of black shoe polish, is 44. No, his wife, Leticia, corrects him in Spanish, he’s 43. 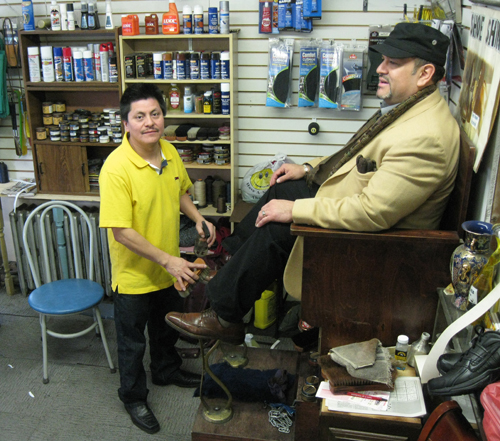 Photo by Nancy A. Ruhling
Gonzalo’s shines are $3 a pair.

Well, it’s only a year. It doesn’t much matter when you consider that Gonzalo has been shining and repairing shoes ever since he was 11. That’s when he began helping his father, a cobbler, after school. “He gave me 5 cents,” Gonzalo says.

Gonzalo’s from Gualaceo, a town in Ecuador that’s surrounded by mountains. The fifth of 10 children, he didn’t have the opportunity to go to high school. He graduated from sixth grade and got a job. For a couple of years, he worked with a cabinetmaker. But after a work accident at 16 — he points to the scar that runs from his nose and across his cheek — he settled for shoemaking.

His father came to America, which Gonzalo calls “the land of opportunity,” in 1986; Gonzalo followed him a year later, settling in the Bronx. Eventually, his mother and six of his siblings came, too.

God looked after Gonzalo. Right away, he got a job with a shoemaker in the World Trade Center. Life was good. The pay was OK, and when he had free time, he went dancing in Astoria.

That’s where he met Leticia, who helps him out in the shop. Leticia, a shy woman with a mile-wide smile, is from Morelos, the second smallest state in Mexico. Her parents didn’t have much money, and when her father got sick in 1988, Leticia, the second of four children, came to New York City. It was a gutsy thing to do; she didn’t know a single soul in the entire country.

“I heard there was work, and you could make money,” she says. 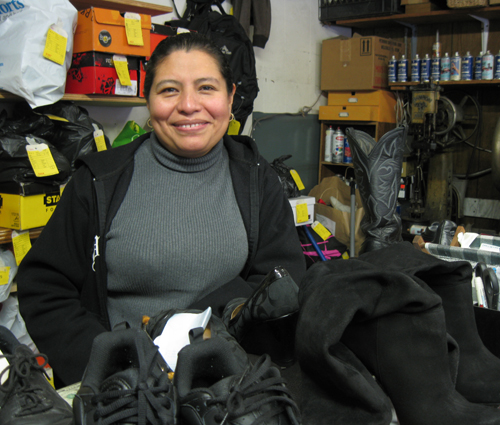 Photo by Nancy A. Ruhling
Leticia helps out a couple of days a week.

A high school graduate, she landed a job in a clothing factory, where she worked behind a sewing machine.

Leticia liked Gonzalo because he was lovable and friendly; Gonzalo fell for Leticia because she had a good figure and was a good cook. (“He wasn’t a very good dancer until I taught him,” Leticia confides.)

They married and have two children — 17-year-old Diana and 13-year-old Gonzalo Jr. 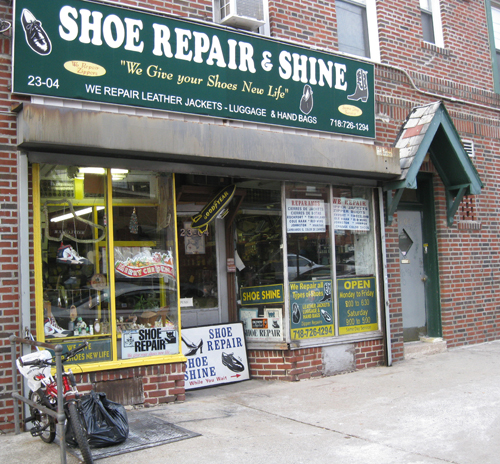 Photo by Nancy A. Ruhling
The shop’s sign says it all.

They loved each other, and they loved America; they didn’t need anything else. They didn’t speak English, so they had to learn it on the job, on the street and from their children. Even though their language skills are good, they are more comfortable having their son translate for them.

Everything was going fine in this land of their choosing.

Early on 9/11, Gonzalo went to work bursting with pride. The day before, he had become an American citizen, and he couldn’t wait to tell his boss. He was repairing a shoe when the first plane hit the twin towers. He thought it was an accident; that’s what he had thought on Feb. 26, 1993 when a truck bomb went off in the parking garage of the North Tower, killing six and injuring more than 1,000. 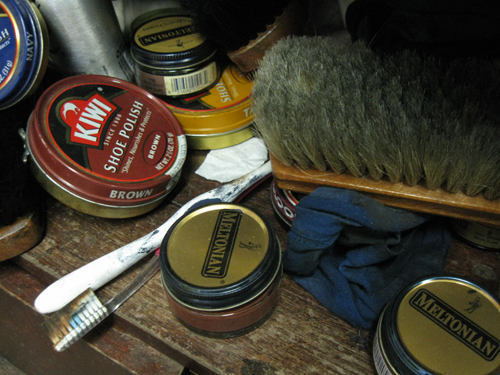 Photo by Nancy A. Ruhling
All it takes is polish and brushes and lots of elbow grease.

“In the 1993 bombing, I heard the noise then felt the building shake,” he says. “It was a little more than a month before my daughter was born. I heard someone say it was a train accident. An hour later, we had to leave the building.”

Gonzalo wasn’t afraid to return to the WTC. He was back shining shoes the day the building reopened. It never occurred to him to find another job. 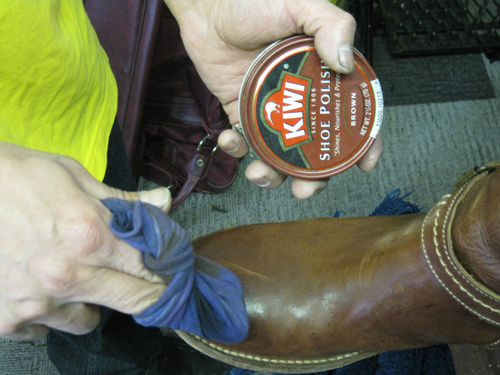 Photo by Nancy A. Ruhling
Gonzalo has the shine down pat.

On 9/11, by the time the second plane smacked into the building, he was running through the thick white smoke. Covered in white dust, he walked home. It took him more than five hours.

This time, luck, thank God, smiled upon him again. He wasn’t injured, and his boss gave him a job in his other Manhattan shoe shine/repair shop.

Gonzalo might have stayed there until he retired had it not been for a friend who told him an old-timer in Astoria was selling his shop. In 2004, the same year Leticia was diagnosed with breast cancer, Gonzalo became a business owner for the first time in his life.

“It took me about two years to get it to work,” he says, adding that he repairs hundreds of shoes and shines upwards of 100 pairs each year. “My customers here are nice. I love them.” 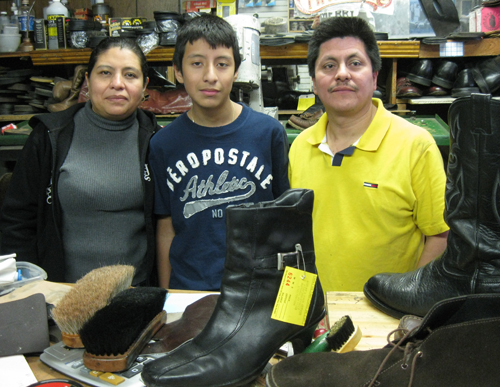 Photo by Nancy A. Ruhling
Leticia and Gonzalo with Gonzalo Jr.

Sometimes the kids help him out in the shop, and Leticia, who survived a stroke in 2009, comes in with him a couple of days a week to do the cleaning.

Leticia, who became a U.S. citizen in 2006, and Gonzalo don’t want to pass the shop to their children. They want them to do what they didn’t get to do — go to college.

Gonzalo doesn’t know what he’d be doing if he didn’t pour his heart and soul into healing heels and soles.

“I love fixing and shining the shoes,” he says as a man with leather wingtips climbs into his chair for the $3 special. 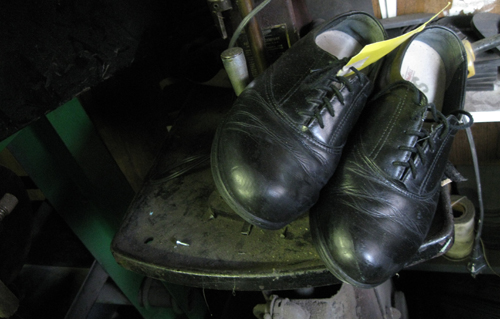 Photo by Nancy A. Ruhling
A pair in need of some sole work.

He polishes the shoes, lost in thought. When the customer leaves, shoes shining bright as new pennies, Gonzalo Jr. takes his place in the chair.

“I sometimes get my shoes shined here,” he says, planting his sneakers firmly in the brass stands. “My dad does a good job.”