Prominently positioned in the living room, there’s a recliner upholstered in corduroy the color of a Christmas tree. It’s right next to a framed poster of an Ansel Adams’ photo of Yosemite National Park.

When Bob Koch walks in, Caesar, a benevolent Beagle with big eyes, is lounging in it. Up until Caesar’s arrival 2 ½ years ago, it was Bob’s chair. “Now, it’s our chair,” he says, squeezing himself around the dog, who gives him a sloppy kiss.

Bob is a big guy who looks like Captain Kangaroo. He used to be an Air Force sergeant, but he doesn’t seem to be a tough guy. 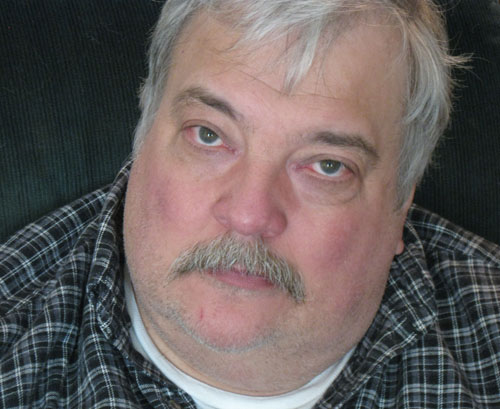 Photo by Nancy A. Ruhling
Bob’s is a familiar face in the Ditmars area.

“I can be, depending on the situation,” he says, his blue eyes softening as he hands Caesar yet another venison treat.

Bob, who is 63, has spent virtually his entire life in Astoria living in the same house his father’s parents paid a pretty penny for in the 1920s when it was as bright and shiny as a new penny.

Bob’s parents — his father was from Germany, and his mother came from Canada — immigrated to Astoria when they were children. Bob, the baby to two older sisters, grew up playing the street games Spaldeens and skully. 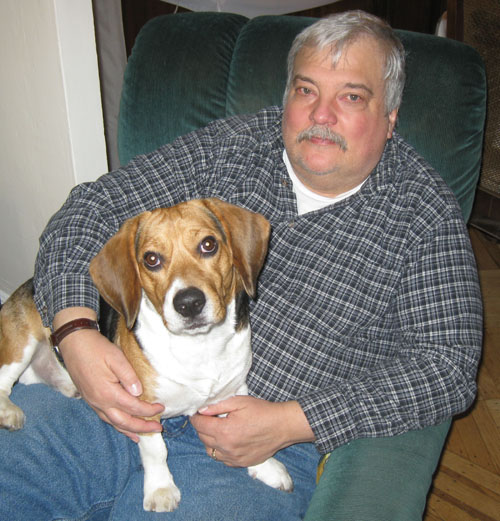 Photo by Nancy A. Ruhling
Bob and Caesar in their recliner.

He had big dreams: He wanted to join the military and be a photographer.

“I’m a creative guy,” he says. “I love the art and technology of photography.”

He did both. But he didn’t get to do either right away. He graduated from high school at 17, and it took two years — an eternity in teenage time — before he was allowed to enlist and get on with his life. “It was the Vietnam era; I chose the Air Force because I liked planes,” he says. 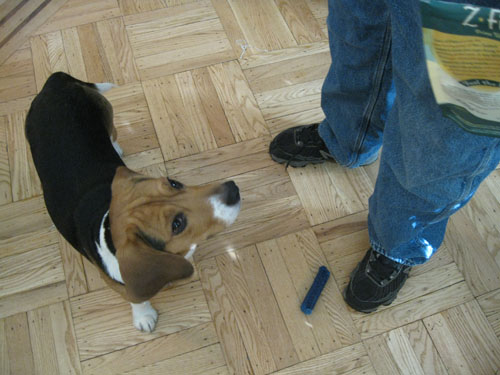 Photo by Nancy A. Ruhling
Bob and Caesar, BFF.

He eagerly signed up for a four-year hitch. He didn’t see any battle action — he was based in Arizona then Guam — but he did become a darkroom technician and photographer.

“I was in a couple of dangerous situations, but I was never shot at,” he says. “My job was to document crime scenes and plane crashes. Once, I spent all night doing autopsy photos then was sent to snap a photo of a Playboy bunny pinning a star on a general.” 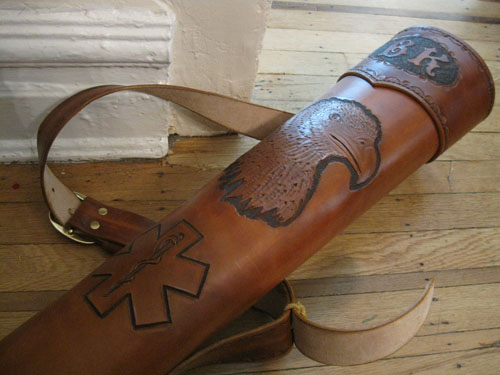 Truth is, he might have stayed in the military if his father hadn’t died. His duty, as he saw it, was to his family. So home he went to take care of his mother and sisters.

He married Donna, the girl across the street. “I had my eye on her,” he says, adding that the fireworks didn’t start until the Fourth of July some 36 years ago when he invited her over. They have two sons, one who lives with them, and a 2-year-old granddaughter. 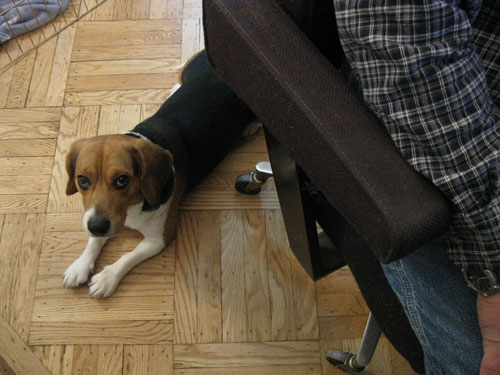 Photo by Nancy A. Ruhling
Caesar waits at Bob’s feet.

Through the years, Bob was a darkroom technician, a photo technician then a service technician who repaired office machinery, eventually working for Xerox for a quarter century. In his spare time, he freelanced as a wedding photographer; Astoria World Manor was one of his more popular venues.

These days, he’s a maintainer for the MTA. He’s the guy who fixes the MetroCard vending machines and the turnstiles. His territory is Manhattan, where he works the 6 a.m. to 2 p.m. shift Thursdays through Mondays. He used to work the overnight shift; getting up at 3:45 a.m. doesn’t seem so hard after that. 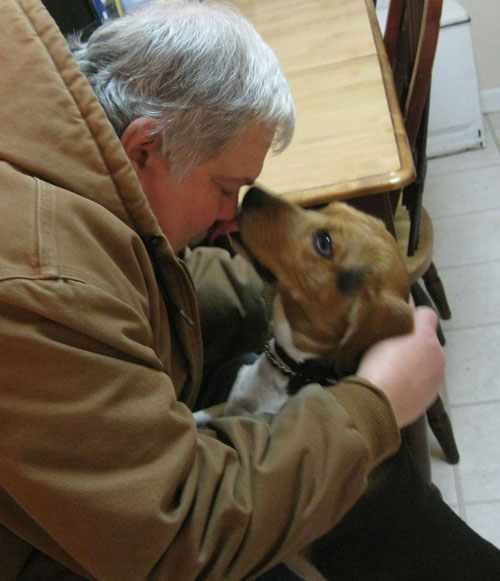 Photo by Nancy A. Ruhling
The big kiss.

“I can’t wait to retire,” he says as Caesar bounces around his lap.

He has a lot of hobbies and interests, and working doesn’t give him time to do them justice. When he has the time, he works as a volunteer certified EMT in Bay Ridge, Brooklyn.

“I gave CPR to my mom and almost brought her back,” he says. “And I’ve saved some lives. I don’t know how many. Three or four, maybe 10. A couple were in the subways.”

When he hits the big 65, his big plans include living in Arizona for a couple of months each year so he can take photos of landscapes to his heart’s content.

“Nature photography speaks to my soul,” he says. “I’ve had my fill of portraits — I’ve probably shot 1,000 weddings. I want a different challenge.” 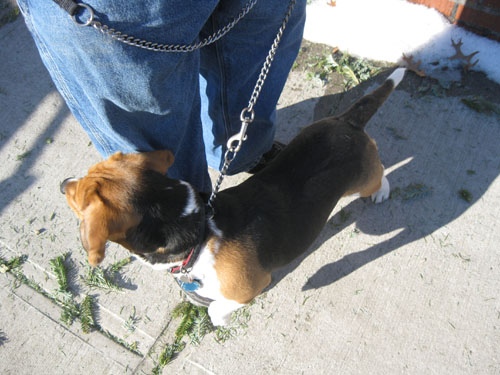 Photo by Nancy A. Ruhling
Let the walk begin.

He’d like to resume singing in the choir at Our Lady of Mount Carmel, where he’s an extraordinary minister of the eucharist and a teacher of what he calls “Christianity 101” to new members.

Then there’s archery, which he took up a while ago. “I used to do this with my dad when I was a kid,” he says, bringing out a monogrammed leather quiver he had custom made. “It brings back all the good times we had.” 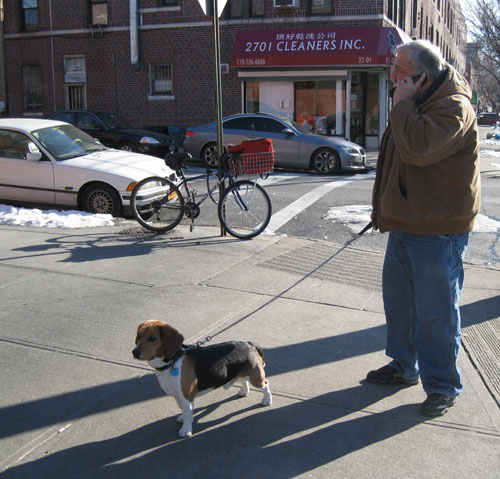 Photo by Nancy A. Ruhling
Bob and Caesar on their regular deli walk/run.

And as Caesar is only too happy to remind, there are the walks they take three to four times a day. Caesar’s breakfast — a quarter pound of Boar’s Head turkey every morning that Bob feeds him by hand — awaits at Othello, the corner deli.

The leash comes out, and eagerly, Caesar leads the way, pulling his master through the clear sunlight of the day and further into the future.