A neighbor steps in to talk about his girlfriend. She dumped him, just like that, no reason. They’d been together 10 years. Ten years! Can you believe that!

“What should I do?” he asks in despair.

“Dude, you’ve got to get right back out there,” George Halvatzis tells him. “You’re a nice guy, you’ve still got your hair, trust me, you’ll do well in the dating game. You’ve got what it takes.”

The phone rings. Someone wants an apartment, so George provides the name of the leasing agent.

Before he hangs up, a former client drops in to chat. She’s upset because she’s not where she wants to be in life.

“If only my husband weren’t a gambler, we could have owned a second house,” she tearfully tells him.

George sets her straight. “Girlfriend, just look out on Ditmars Boulevard at all the people who pass by here. How many of them don’t even have one house? You’ve got one, so be grateful. Chill out. This isn’t a life-or-death situation.”

Next in line is a neighborhood newcomer who wants the name of a reputable locksmith. “Go around the corner, I just used that guy, he’ll do a good job.”

Excuse me, it’s the phone again. A couple George sold a house to four years ago is on a trip to France, and their tenants just called their cell to tell them they have no heat. “Don’t worry, have another glass of wine, I’ll go over and see what the problem is.”

Before he can escape, an older couple comes in to have him list their house. He sets up an appointment for later in the day.

Welcome to the wacky world of George Halvatzis, Astoria’s resident and residential therapist, aka The Answer Man. “In every real estate transaction, I’m doing therapy because it’s stressful, and my main job is calming people and making them realize that no matter how bad things are, there’s always someone who is in a worse situation,” he says. “My philosophy is just to take things as they come and get them done, you know what I mean?” 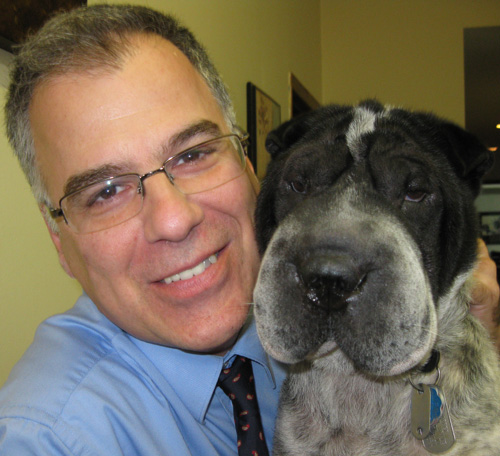 Photo by Nancy A. Ruhling
George with Chopper, the office mascot.

For the more than two decades that George has played the Father Confessor of Ditmars Boulevard, he has been called upon to do everything from propping up marriages and rotting front porches to replastering falling ceilings and patching up family feuds. “I’ve seen and heard just about everything,” he says. “There’s very little that’s shocking to me any more.”

He also has established a record as a rock-solid do-gooder. When his listed clients are out of town, it is George who shovels the snow off their sidewalks so they won’t get fined. And he’s the go-to guy for customers’ disasters great and small. Do you have a dead cat in your back yard? Call George to take it away. Are you expecting a package of frozen steaks? Send it to George’s office, and he’ll sign for it and keep it in his freezer until you pick it up.

“I don’t see my job as selling real estate,” he explains. “I see it as helping people out. My wife once said to me, ‘I wish you had somebody like you.’ Between you and I, I wish I had somebody like me. When I list a house, I treat it just as I would my own.”

Although George comes from a real estate dynasty — his mother owns Amorelli Realty in Astoria and his two brothers manage it — he didn’t see it as his calling. But after he graduated with a bachelor’s degree in psychology from Queens College, he started working with his family then set up his own office.

“Everything I’ve learned, I’ve learned from business and from life, from trial and error and from watching people,” he says.

He makes it his business to attend the “class” of life six days a week from 10 a.m. to 7 p.m. The office only has four other agents, so George is always on duty. On the seventh day, he’s supposed to relax at home on Long Island. But while he’s spending quality time with his wife, Marion, his 13-year-old son, Georgie, and his dog, Chopper — “He’s one stubborn Shar-Pei; everyone else listens to me but not Chopper!” — he’s gearing up for Monday morning.

“To de-stress, I play paintball with my son,” he says. “I also go to the gym. And I walk Chopper — or should I say that he walks me?”

Of course, not everyone who comes in George’s open door for his continuous open house has a problem to be solved. Some just want to catch up on gossip and hear George riff on everything from yoga poses — “I tried to do one I saw in my wife’s book, and it was really hard” — to Braveheart — “‘I am William Wallace’ … that’s such a great movie.”

Before he can get too philosophical, a guy in a backpack walks in, and George is back on stage.

“This business has prepared me for anything and everything,” he says. “You never can master it. You have to be constantly evolving and have to change with it.”

What are his future plans?

For once, George is stumped.