So is The Telescope Guy.

“You wanna see Jupiter?” he calls out as people crowd around him on the moonlit sidewalk. “Just step right up. You gotta see this. It’s great.”

Patrick Cannon, the resident stargazer, mans his 90-mm silver Maksuktov Cassegrain as though he’s commanding the Starship Enterprise, pointing out the planets and singling out the stars.

For the more than two years that the Astoria sky has been Patrick’s gazing ground, he’s changed our lives by putting stars in our eyes. He wants us to see what he sees so much that like the moon, he waxes poetic. “To view the heavens is to let billions of years of celestial history enter, through the pupil, not only the mind but the soul,” he says. “It is to see things not only as they are but as they were.” 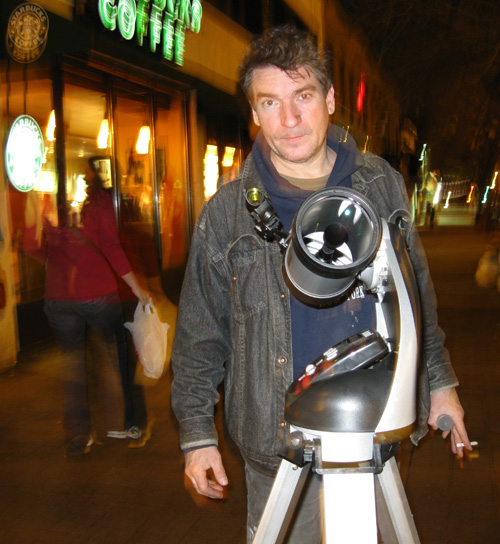 Photo by Nancy A. Ruhling
When he’s doing his celestial studies, Patrick’s the star of the street.

Patrick’s sidewalk astronomy classes started when he moved to Astoria, and his landlord decided to tar the roof. The newly divorced Patrick had been doing all this stargazing solo from that vantage point with the telescope he bought on Feb. 14, 2006, his first Valentine’s Day as a single man again.

He didn’t want to give up his celestial sightseeing, so he went street side. Before he knew it, people were stopping to look not at the sky but at him. “At first, people thought I was a surveyor or a photographer,” says Patrick, a big playful boy of a man with a giant’s hearty laugh and twinkling eyes. “But when they realized what I was doing, they started stopping what they were doing and looking up instead of down at their BlackBerries.”

When Patrick invited people to take a look, they couldn’t take their eyes off the heavens, and soon they were starting to search for him. “Looking at the stars brings you back to nature and back to yourself,” says Patrick, who plays star guide to up to 70 people per evening. “It’s a peaceful past-time. Through the worst times of my life, looking at the stars, the sky, the moon, the planets, has made me feel like whatever I’m going through is small by comparison. And it has kept me calm.”

Long before Patrick even knew there was a word called astronomy, he had been interested in the skyscape. He’s a city kid who grew up in Flushing as one of six children of Irish-Americans. When he was little, his father took him to watch summer sunsets in the Adirondacks.

“That’s what we did on vacation,” he says. “He taught me the sky. The stars would come out, and, standing on the highest hill, we could see the white strand of the Milky Way as clear as a bell. And my father would say, ‘That’s Pegasus, that’s Cassiopeia, that’s Ursa Major, that’s the North Star.'”

As Patrick speaks, he becomes as energetic as a shooting star, excitedly pointing his index finger heavenward as if he’s tapping each constellation with Tinker Bell’s magic wand.

He got a telescope one Christmas, which only increased his interest in the subject and made him determined to become a jet pilot so he could be up close to the clouds. But when he was a teenager, he was shot in the calf during a riot at his high school. “I couldn’t get into the Air Force or the Navy because I have no feeling in my left foot,” he says. “When I went back to school, I got death threats, so I dropped out and got my GED.”

For his career, he turned to the earth, not the stars. He learned the marble trade and although he still worshiped the stars, it wasn’t until 2003, when he got married, that he got his second telescope. “My wife and her daughter gave it to me for Father’s Day,” he says. “I used to set it up in the back yard, where everybody could get a look.”

Patrick’s a self-taught and economical astronomer: He surfs the Internet and searches the public library for reference material. Sometimes, his fans present him with books, and one couple even gave him tickets to the American Museum of Natural History. “It was amazing,” he says. “I spent the whole day there and saw everything, including the star show.”

Patrick sets up his telescope two to three nights a week all year round. He’s been known to stay until midnight. The viewing is free, but some fans insist upon giving him tips. “The best nights for viewing are the worst nights for the viewer,” he says, “because on the cold, crisp nights, you get the clearest views.” 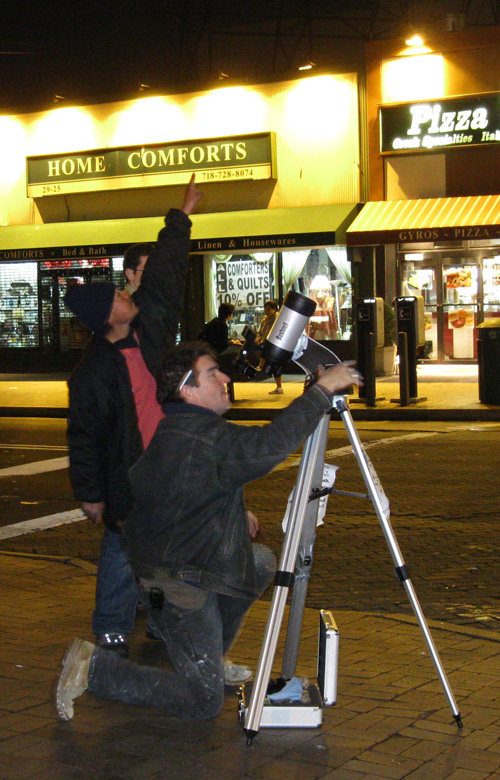 Photo by Nancy A. Ruhling
Patrick puts the stars within the reach of the man on the street.

Patrick’s biggest fan is his 5-year-old daughter, Phylicia. “I’m already talking to her about this,” he says. “I bought her glow-in-the-dark stars for her walls, and I’ve given her several books. This is something that we will share just as my father and I did.”

The sky is alive tonight, and as Patrick looks up, his hazel eyes shine like neon signs. He will spend hours on the corner, chatting and cheering up the crowd. “The thing I love is sharing knowledge and changing people’s perspective,” he says. “I love it when people get as excited about astronomy as I do.”

A pair of parents with a 2-year-old daughter stops by. The little girl, a sweetie pie, looks at the moon in the sky then puts her brightly shining eye to the scope. Smiling, she points up and down, signaling that she knows the images are one and the same.

“You made my night!” Patrick shouts to the sky. “My heart is thumping.”