It doesn’t matter where he goes – the corner deli, the N train, the organic market – Todd Killian stands out in the crowd.

It’s not the way he looks – closely cropped brown hair, dark-chocolate eyes and slender build – it’s what he does. Todd, aka the meet-and-greet guy, smiles a toothy grin and stops to talk to strangers.

It works, perhaps because in a way, Todd, too, is a stranger. He has only called Astoria his home for a dozen years, and he was raised in a tiny town – ever hear of a one-stoplight dot on the map called Fleetwood, Pa.? – so he isn’t familiar with big-city, mind-your-own-business manners.

“My philosophy is that if you give, you get back,” Todd says. “And if you care, people care back.” 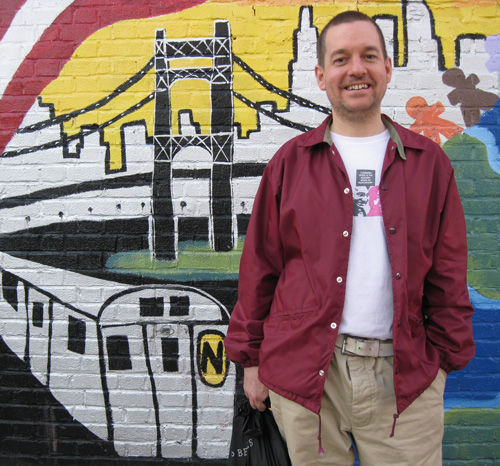 Photo by Nancy A. Ruhling
Todd’s goal is to get the whole world to smile with him.

In the last six months, ever since he was diagnosed with prostate cancer, Todd has been practicing his goodwill ambassador routine in earnest because now, more than ever, he wants to share his joy of life with every human being on the planet.

“I’m in a very fortunate time of my life,” he says. “I’m lucky because I get to appreciate every day. The cancer has made my life even more fantastic because it has allowed me to look more inside myself.”

What he has seen has astounded him. He’s in the fashion business, and ever since he was a teenager, he has been concerned with what people wear not who they are. “I’m getting more serious about the practice of looking inward,” he says. “I’ve discovered that I prefer to be alone; I’m content spending the weekend in my apartment meditating, reading and calling my family.”

The diagnosis changed his life and his lifestyle. In lieu of surgery and/or radiation, he’s chosen a holistic approach. He’s switched to a healthier diet – nothing with meat, nothing with sugar, everything that’s organic – and has added cardiovascular workouts to his yoga practice and Buddhism and philosophy studies.

“I’ve always liked meeting people,” he says. “It gives me a chance to work off the anger and bitterness I felt in my childhood because my mother and father couldn’t be there for me.”

Todd, his brother and three sisters grew up in a Victorian house. His father, a doctor, divorced his mother, a nurse, when Todd was 14. “My mom had Parkinson’s, and she was left with five kids to take care of,” he says.

It was after that that Todd got interested in fashion. The 16-year-old saw it as a way to call attention to himself in his fatally fractured family. At 19, he signed up for a two-year hitch in the Army. “I didn’t want my father to have to pay for my education,” he says. “I never saw any military action, and I spent my free time designing clothing for my girlfriend.”

When he got out, he took his Army college fund and headed to Manhattan’s Fashion Institute of Technology. After graduating and working in the fashion industry for three years, he started his own label. “In 10 years, I never made any money,” he says, adding that he waited tables at night for three years straight. “For a while, I lived with my girlfriend and then with a friend.”

It wasn’t until he licensed his name to Nepenthes America, the Japanese company that subsequently hired him full time, that he finally had enough money to make the rent. “I lived with three people in a one-bedroom apartment for four years in Manhattan,” he says. “It was very, very challenging.”

He moved to Astoria, where the rents are lower, and he’s been in the same apartment ever since.

Although his spiritual journey has supplanted his passion for fashion, Todd loves his job. “I get to interact with people, and I help the designers bring their creations to fruition,” he says, adding that as production overseer, he travels to Japan and Italy. “They are so creative that it humbles me.”

Todd sees his cancer as a positive sign. “It helps me hone in and open my heart to others,” he says. “It’s made me slow down even more so that I take time to enjoy my family and friends more.”

Saying hello to a stranger, giving someone a hug – these are the important things in Todd’s life. “If you want to love people, you have to love yourself first,” he says. “I’m working on loving myself every day.”

He stops. The smile fades briefly as he contemplates his future. “I don’t have a fear of dying,” he says. “I believe I’m doing what I’m supposed to be doing in this life. If I have to have surgery, I’ll do it.”

Todd’s hoping that his happiness will rub off on his family and everyone he’s fortunate enough to meet.

“I’m trying to evolve as a human being,” he says. “I want to become a better person and become more in tune with myself. I want people to see me as I really am. Who is that? I don’t know yet.”