She can tap dance and sing. She can play the flute and the piano. Okay, she’s better at the flute, which has been her instrument of choice since fourth grade. Did I mention that she’s more than passable at Pilates?

If none of this wows you, she’s literally ready to bend over backward while cooing like a dove, making a bubble-popping sound and doing her signature diva impression.

All she needs is a stage – any stage.

Sarah Bradley, whose birth certificate named her Sarah Ricker, is an aspiring actress who’s waiting in the wings for her big moment. She has great faith that this will happen, but right now she’s working in front of the stage, not on it. 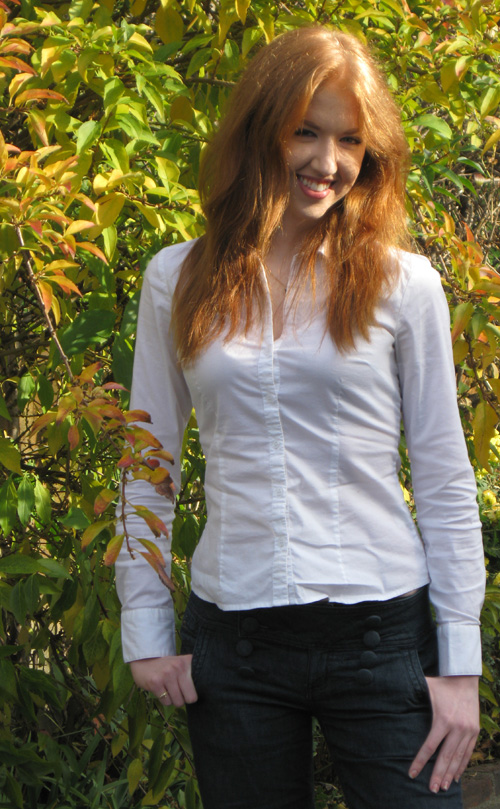 Photo by Nancy A. Ruhling
Sarah is waiting for the big break that will make her a star.

For the last two years, ever since she left Marymount Manhattan College, where she was working on a bachelor’s degree in theatre arts, Sarah has been working for Max Merchandising, a Manhattan company that designs, manufacturers and sells Broadway-show programs, T-shirts, CDs and other memorabilia in theaters. Sarah works 10 a.m. to 6 p.m. in the office then sells the souvenirs on Friday and Saturday nights at showtime.

“I get to see a lot of free theatre,” she says, “and I get to meet a lot of theatre people at the opening- and closing-night parties. But it doesn’t give me much time to do what I really need to do – audition.”

The three auditions she has been able to make didn’t click. She attended the cattle call for Spring Awakening but got typed out. “I didn’t have the look they were looking for,” she says and sighs. “They wanted someone 18 or under or someone who looks that age. At 23, I’m too old!”

When she tried to try out for Shakespeare in the Park’s Hamlet, she was turned away because she doesn’t have an Equity Card. “I really wanted to play Ophelia, because Shakespeare really didn’t flesh her out,” she says. “Many actresses who play her see her only as a one-dimensional damsel in distress. She’s deeper than that.”

The same thing happened during the casting call for a regional production of Anything Goes – the show was carding.

The experiences haven’t discouraged her. In fact, they have encouraged her not to reach for the stars but to be a star. “I can’t see myself doing anything else in my life,” she says. “So I keep a positive attitude.”

Sarah became stage-struck in her first year of high school. “I remember exactly when I knew I wanted to be an actress,” she says. “I was in ninth grade, and I had joined the drama club. I got a part in the chorus of Footloose, and performing before an audience was the biggest adrenaline rush of my life.”

She cinched roles in several high school productions, most of them classical musicals, and even started a community theater, Admit One Players, but her hometown of New Windsor, N.Y. is a far cry from the Great White Way.

“I love the film and the stage,” she says, her blue eyes turning olive green with enthusiasm. “I’d like to do any kind of acting that also gets me paid. The work doesn’t have to be in Manhattan; I’d love to tour and see other parts of the country. My dream role would be Christine Daae in Phantom. Today’s Broadway is all about the belters, the Sutton Fosters, not the Julie Andrewses of the world. I’m a soprano, and it’s one of the few shows that calls for a soprano.”

Acting, at least for Sarah, allows her to let down her long, honey-hued hair. “I love becoming other characters,” she says. “You get a chance to explore parts of yourself and get to show dark parts of your personality that you wouldn’t dare do in ordinary circumstances.”

Never mind that nobody has asked Sarah to perform any of the special skills listed on her resume. (“I’d love to show them off,” she confides. “It’s a hoot!”) She’s convinced that the right role will come when the time is right. In the meantime, she’s boning up on acting classes and voice lessons and hoping to be promoted to manager at Max Merchandising so she can work at night and audition during the day.

“There are people in New York City who make it,” she says with determination, adding that she’s ready to send out her new headshots. “And I’m going to be one of them.”

As proof, she smiles and does her dove coo.