It’s the after-lunch rush, and the line of UPS drivers stopping in for a snack is almost out the door. Andreas Andreou hasn’t had a break all day or a day off in more than a month, but he gladly steps behind the counter to take the take-out orders.

There’s nobody else to do it. His mother, Timi, is slaving over the stove, his father, Rotis, is manning the grill, his younger sister, Avgie, is heating the pizza slices, and his best friend, Robbie Greco, is at the cash register.

Cyprus Corner, which is close to Astoria Park, announces itself like a megaphone with a Mediterranean-blue awning and streamers of plastic flags flapping outside. It’s Andreas’ first restaurant, and it’s like his baby: No matter how demanding it is, he loves it unconditionally. “We cherish what we make,” he says proudly. “I never serve anything I won’t eat myself, and I love to eat.”

Andreas, an earnest fellow with large eyes the color of kalamatas, was born with a serving spoon in his mouth. Rotis and Timi came to America from Cyprus in the 1970s and met in New York. When they married, they opened Lemonia, a longtime Astoria establishment notable for his shieftalia and her tangy tzatziki. 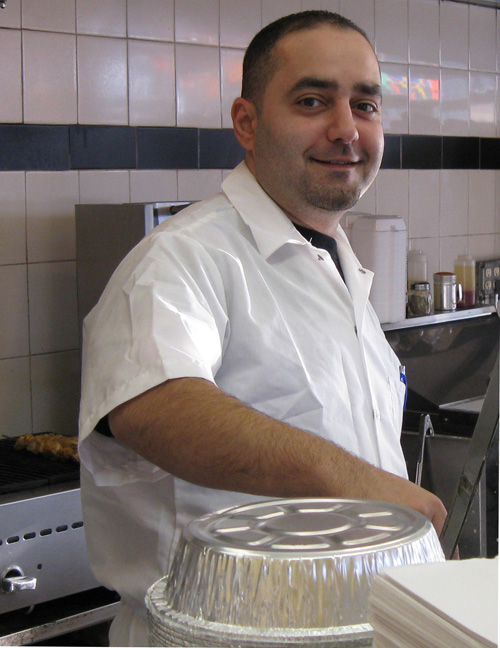 Photo by Nancy A. Ruhling
For Andreas, the restaurant business is all in the family and all about family.

When Andreas was younger – “I just turned 30,” he says with a sigh as if that means he’s ancient – he helped out at Lemonia by busing and waiting tables. “We are a very close-knit family,” he says. “I have dozens of cousins and aunts and uncles in Cyprus and New York. Most of my best friends are my cousins, and we spend a lot of time together.”

His family settled in Whitestone, surrounded by relatives. “Even though I was born here, I learned English as a second language,” he says, no trace of an accent in his voice. “I learned to speak Greek first because that’s what my parents speak. It was my friends who taught me English.”

The first time Andreas left his family it was to go all the way to SUNY in Geneseo, N.Y. It didn’t work out. “I wasn’t used to being away from everyone,” he says, adding that he stuck it out for two years. “It just wasn’t for me.”

He had visited Cyprus many times with his parents and decided to join its army after he quit SUNY. For six months, he was part of a demolitions group in the armored division. “It gives me dual citizenship,” he says. “That really means something to me.”

Andreas returned to Queens two weeks before 9/11. There weren’t a lot of jobs, so he settled for bartending. Later, he got a job at Citibank. “Two years ago, right before the recession, they made an announcement that there would be no raises or promotions,” he says. “I didn’t have a degree, so I figured I would be the first to go. So I resigned.”

He moved back home with his parents, who had closed Lemonia and were living in a three-bedroom apartment in Flushing. He enrolled in Queensborough Community College. “I was delivering pizza in Whitestone to make money for school,” he says. “Some things haven’t changed — I’m still delivering pizza for Cyprus Corner.”

When the opportunity to open Cyprus Corner came, Andreas jumped at the chance. “My uncle and father found out about this space,” he says, adding that he will return to school in the spring to complete the one remaining course that will earn him an associate’s degree in business administration. “And everybody agreed to pitch in to help me.”

Cyprus Corner is a Greek restaurant, but it also sells pizza as did the previous place, Theresa’s. “They left the pizza oven, which is an expensive piece of equipment, so we learned how to make pizzas,” Andreas says. 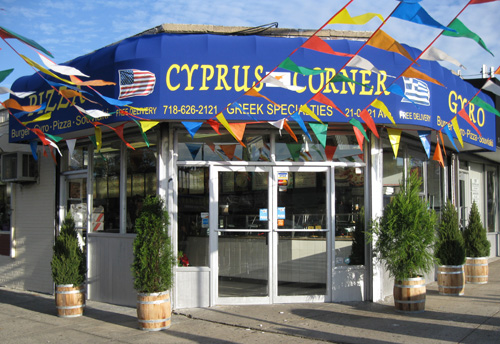 Photo by Nancy A. Ruhling
Cyprus Corner wears its nationality on its bright blue awning.

Andreas is on the job 24/7. In the mornings, he shops for the produce and meat, and in the afternoons and evenings, he pitches in wherever he’s needed, which is everywhere. “We are just starting, so it’s a little rough,” he says. “We don’t have a budget for marketing, so right now it’s all word of mouth.”

Although Cyprus Corner is Andreas’ restaurant, he’s doing it all for his family. “When it becomes successful, I’d love to eventually buy my parents a house,” he says. “That’s my first and foremost priority.”

Of course, he dreams of the day when he will get married and have his own family and there will be a Cyprus Corner on every corner. “This is a great way to support a family,” he says. “I know because my parents did it. I’d love to pass this down to my children when I have some.”

Timi finishes making a batch of her special rice pudding and asks Andreas to do a taste test.

Licking the spoon, he pronounces it perfect. Then he jumps behind the counter to make a gyro for the next customer.