“My work,” says Alex Markwith, “is meant to inspire a conversation.” 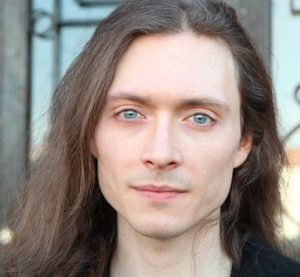 Alex grew up in Pennsylvania.

He places it on the floor, artfully leaning it against the leg of his black and white desk. 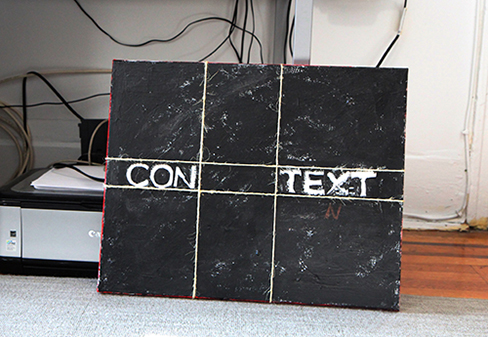 CON TE(X/N)T, which is what Alex calls this work, is a black canvas edged in blood red inscribed with a single word that is cut in half: CON TEXT.

It has a double meaning – there’s a nearly invisible dark brown N below the X, making it CON TENT.

Twine packages the canvas and the word in a crude cross. 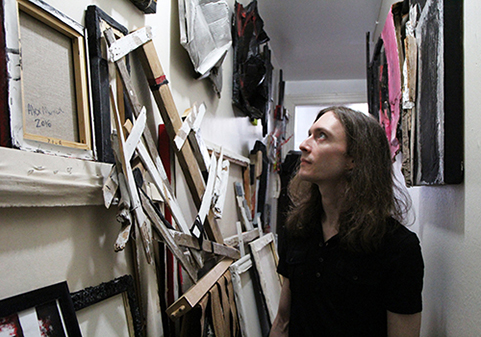 The entry to his apartment doubles as storage space for his artworks. 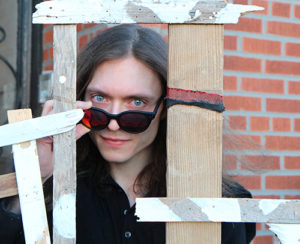 Alex posing with one of his wood works.

Con could be con as in con man. Text could be text message, which leads the brain to Twitter, which conjures up claims of content that could or could not be what someone keeps calling fake news.

Put CON and TENT together and in the proper CON TEXT, the word becomes CONTENT, as in satisfied with the status quo. 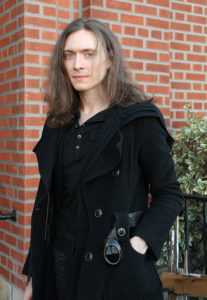 Alex has a BFA from the Rhode Island School of Design.

That’s only one interpretation.

With Alex, whose straight, shoulder-length hair gives him the look of a retro rocker, everything is black and white except the shades of meaning in his works. 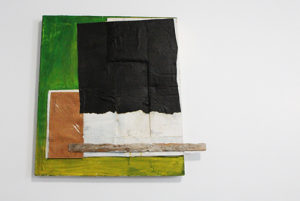 “My role is to encourage discussion rather than to tell people what to think,” he says. “My context of thinking is different from that of the viewer.”

What does Alex see when he looks at CON TE(X/N)T? 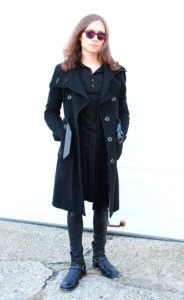 Alex creates around the clock.

On that score, he prefers the art of silence.

Alex, who is 29, has been communicating with lines and shapes and images his entire life.

He grew up in Kingston, Pennsylvania, the Susquehanna River city whose most distinguishing trait is its proximity to Scranton.

He drew his way through public-school art classes and supplemented them with private courses in ceramics and painting. 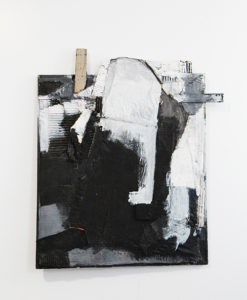 By the time he was in high school, he knew he wanted to dedicate his life to art.

While he was at the Rhode Island School of Design, where he earned a bachelor’s degree in fine art, Alex landed a summer internship at a Manhattan art gallery.

“I didn’t have any money to get an apartment, so I stayed with friends or slept on a bed set up at the gallery or commuted back to Pennsylvania,” he says. “The owner had a house in New Jersey that was about halfway between New York and Pennsylvania, so I stayed there, too. During this time, I met the person who gave me my first show. It was 2011, and I was 22.” 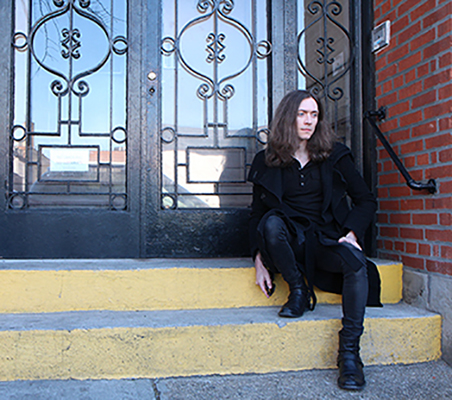 After living in Manhattan, Alex moved to Astoria in 2015, where his one-bedroom apartment doubles as his studio.

Its long, narrow entry hall is filled with Alex’s canvases, which are stacked nearly to the ceiling.

He uses a corner of his kitchen to produce his mixed-media works, which he describes as a “hybrid of painting and sculpture.” 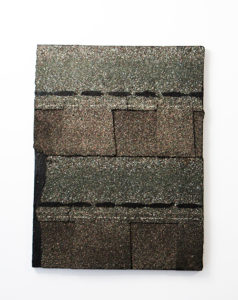 Work on Canvas is made of roof shingles and tar.

Alex’s ideas come from manipulating materials. He cuts, nails and crushes them into art.

“Red and white and black are my primary colors,” he says. “In this way, they almost become non-colors. The black and white give structure, and the red is highlights.”

CON TE(X/N)T, is part of a new collection that adds art-related words to the mix. 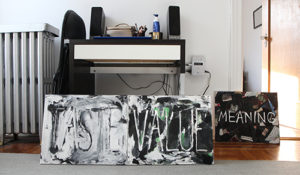 “I work around the clock,” he says. “I compulsively start stapling, or I pick up a brush and start painting or move things around on the canvas. The idea for the text series came about differently. I got the idea for the series at 3 a.m. and got up and wrote it in my notebook.”

His Work on Canvas, for example, came into being when he found some old roofing shingles. 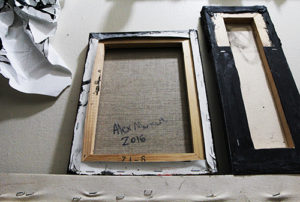 How to tell it’s a real Alex Markwith.

Although Alex is happiest when he’s working on his own work, he works his art around freelance jobs, which include graphic design projects and stints at art galleries and artists’ studios.

“I’d like to have a separate studio,” he says, “but I do like the idea that here I can go in and out whenever an idea comes.” 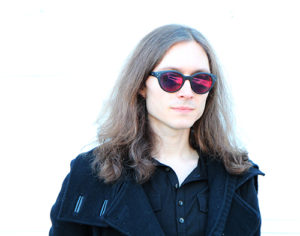 He hopes you go to his next show.

He goes into the kitchen-studio and replaces CON TE(X/N)T with three more new text canvases: TASTE and VALUE, which are meant to be displayed together as a diptych, and MEANING.

They spark a whole new conversation.