Standing at a silver slicing machine, John Gordon looks out at the crowd of customers at the counter and smiles. 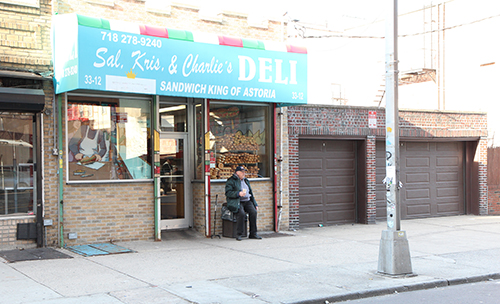 The stretching sun hasn’t even taken a bite out of the morning, but already hungry people are lined up, mouths watering, for the jaw-dropping, jumbo subs of The Sandwich King of Astoria, a.k.a. Sal, Kris & Charlie’s Deli.

“My favorite thing,” he says, “is to stare at them when they take the first bite. They are so happy; some are in shock.” 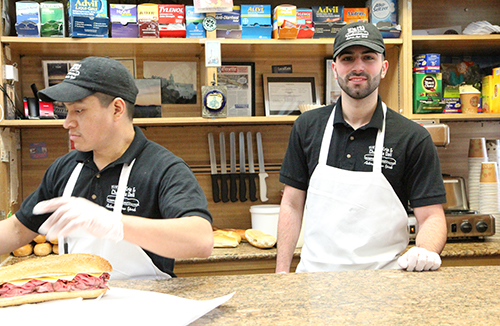 John at the front counter.

About that first bite.

No matter how you slice it (and most eaters have it cut into several pieces to last a couple of meals or even days), the sandwich is a whopper: It’s 14 inches long and twice as tall as the average wide-open mouth.

John, 26, and his older brother, Nick, have been working for The Sandwich King of Astoria since they were teenagers. 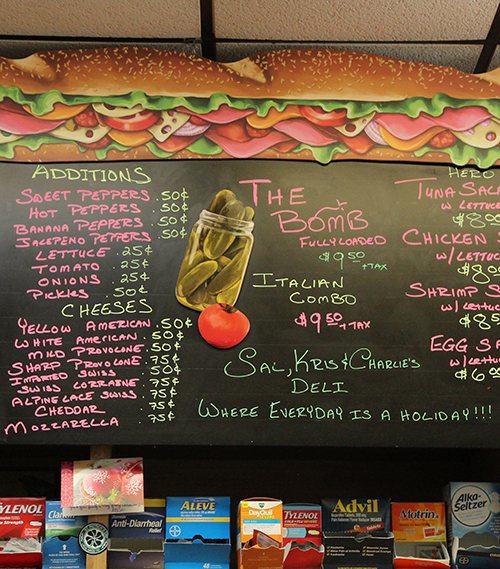 The Bomb on the massive menu; Alka-Seltzer is $1.

Their father, Charlie, opened the taste buds tantalizer in 1987, the year Nick was born, converting the grocery/deli that was at 33-12 23rd Ave. since the 1930s into a super-sandwich shop.

He named it Sal (for the employee who had started working for a previous owner at age 8 and stayed with Charlie until dying at 65), Kris (for his wife, who worked the counter and slicers with him) and Charlie (for himself). 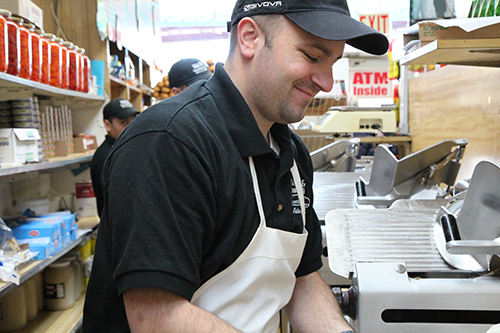 Charlie, who had been in the bakery business, believed that bread was the key to sandwich success. Size, his gut told him, did matter.

It was he who invented the shop’s signature, The Bomb, so called because it explodes with fiery flavors in the mouth. 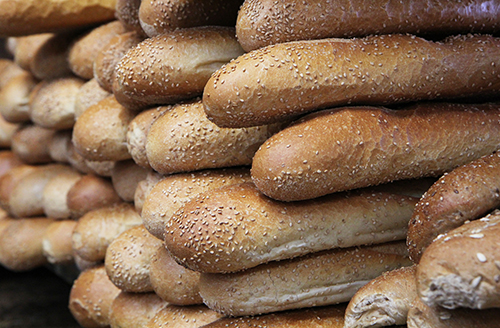 The behemoth, which at $9.50, plus tax, is  the deli’s most expensive, comes “fully loaded” with Italian and American cold cuts topped with American and Provolone cheese, lettuce, onions, tomatoes, hot peppers and sweet peppers. 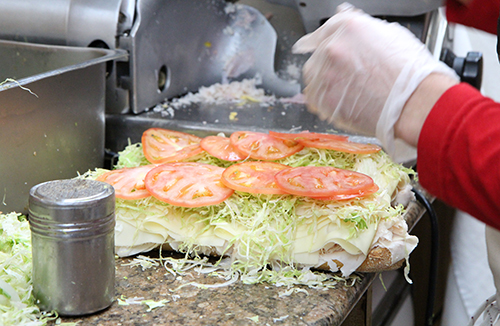 Putting it all together.

“It came about accidentally,” Nick says. “A customer couldn’t decide what he wanted and told my dad to make whatever he wanted. Other customers started asking for it, and it got so popular that we had to call it something.”

John, who has a beard and is rather reserved, and Nick, who is married, clean-shaven and chatty, also got into the family business by accident. 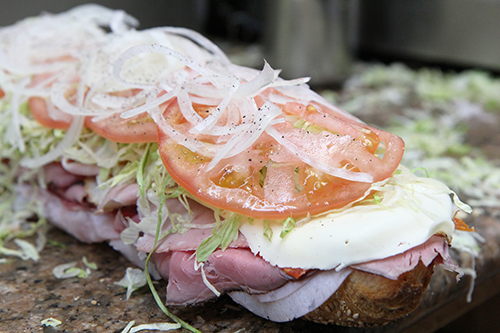 It’s what’s inside that counts.

By the time Nick, who is a roast-beef sandwich guy, graduated from high school, Kris was ill, so he stepped in full time to cover for her.

Although she got better, he was doing such a good job that she decided to retire. 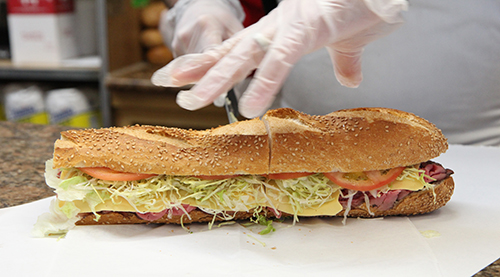 “I love interacting with the people,” he says.

It has never occurred to him to work anyplace else. 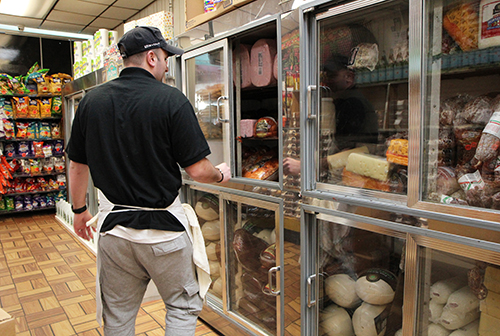 Nick getting the meat out.

John, whose favorite sandwich is the Italian combo, joined him after studying a semester at Queensborough Community College.

He came to help while Charlie was recuperating from an illness and stayed even when Charlie returned full time about a year later.

Through the decades, word of mouth has worked well for The Sandwich King of Astoria: Sal, Kris & Charlie’s never has had to advertise or promote itself in any way. 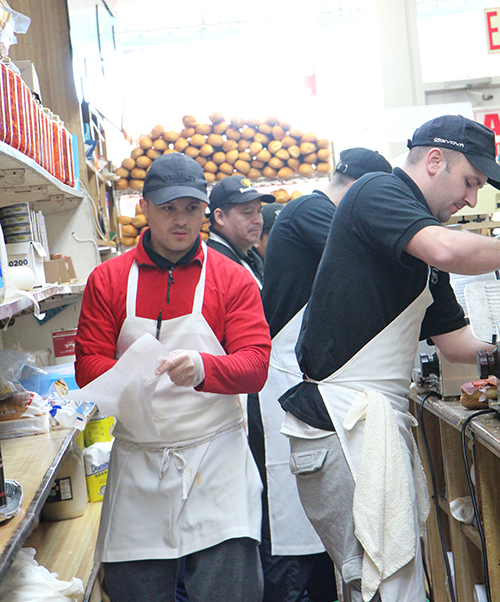 Incoming! All hands to the slicers!

The brothers work the shop with a staff of four.  John opens in the morning, and Nick closes at night.

The shop is long and narrow like a baguette, which makes it easy for them to get in each other’s way when the orders come flying in like artillery aircraft. 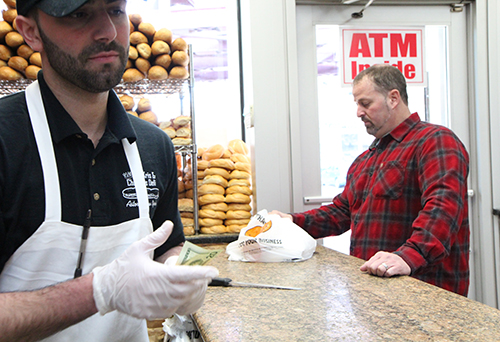 Sometimes, Nick says, there are as many curses as cold cuts.

Nick and John, who work six and sometimes seven days a week, don’t have much time to think beyond the next sandwich.

There are some things, though, that they know for certain. 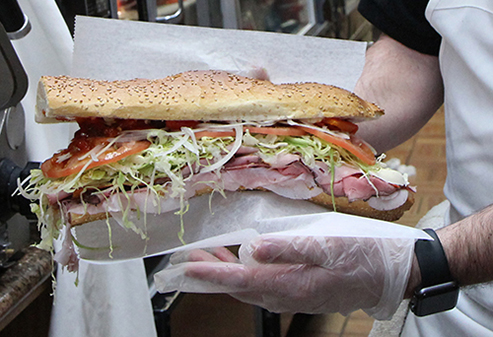 Nick says there’s no way there will ever be more than one Sandwich King of Astoria shop.

John, who has not heard him say this, says that someday he’d like to expand Sal, Kris & Charlie’s.