Yes, Leonard Vogt is sitting in it, sipping coffee from a dainty China teacup rimmed in gold. 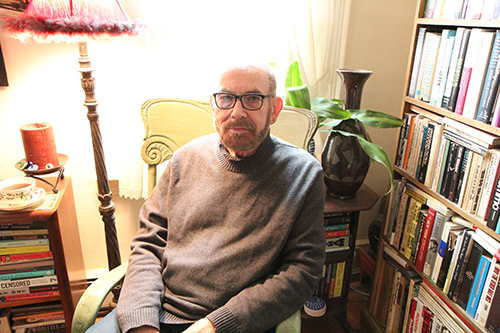 But that doesn’t mean that he’s idle.

Even his rocking is vibrant and vigorous.

As he starts listing all the things he’s involved in, Phryne, his 4-year-old chocolate-color rescue dachshund, comes scampering into the living room waving her long tail back and forth like a metronome.

Phryne is an atypical appellation, especially for a pet. 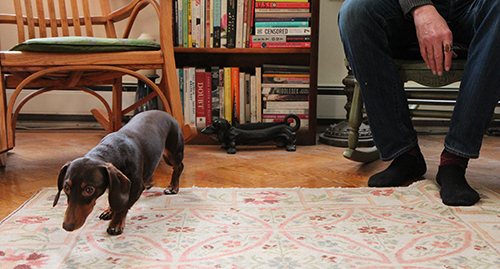 Phryne is a 4-year-old rescue.

Leonard, lean and cerebral, explains that she is named after Phryne Fisher, the glamorous Roaring Twenties private detective in the ABC-TV series Miss Fisher’s Murder Mysteries.

He’s an English teacher, so it’s a plus that the show is based upon the novels of Australian author Kerry Greenwood.

As he’s talking, Phryne’s other daddy, Michael Rhoads, comes into the living room, leash in hand.

He and Phryne have just returned from a spin around the block, so she and her short legs transfer their allegiance and affection to him in the hopes of another walk.

Her ruse doesn’t work, so she circles back to Leonard who circles back to his life story, which begins in East St. Louis, a rough, impoverished city in Illinois when he was born. 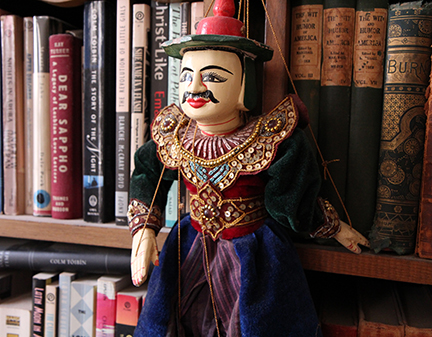 Leonard likes to re-read the classics.

Leonard was the baby; his brother was nine years older, and his sister was 10 years his senior.

His father was an alcoholic whose only job was the heavy lifting of pressing a bottle to his lips.

His mother worked, but she had a hard time paying the bills.

Somehow, though, she scraped together enough money to send Leonard to Catholic schools.

Like a lot of young people, Leonard didn’t know what he wanted to do with his life. He had entertained the idea of becoming an opera singer. 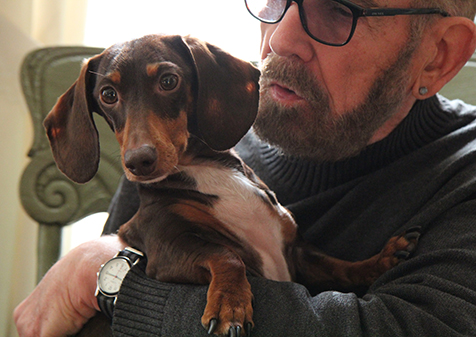 It was such a farfetched notion that he was easily persuaded to join a religious order.

By his senior year in high school, he had transferred to a Catholic school in St. Louis with the intent of dedicating himself to the Brotherhood of Mary.

“Getting out of East St. Louis was a blessing,” he says. “I was a straight-A student, but I was quite an introvert so I get beaten up and bullied. In St. Louis, I was socially accepted and did things, including playing soccer and editing the yearbook, that I never would have done in East. St. Louis.”

Leonard, however, soon discovered that the religious life was not for him.

“I was in a teaching order, and ironically, given the fact that I became a college professor, it didn’t appeal to me,” he says. 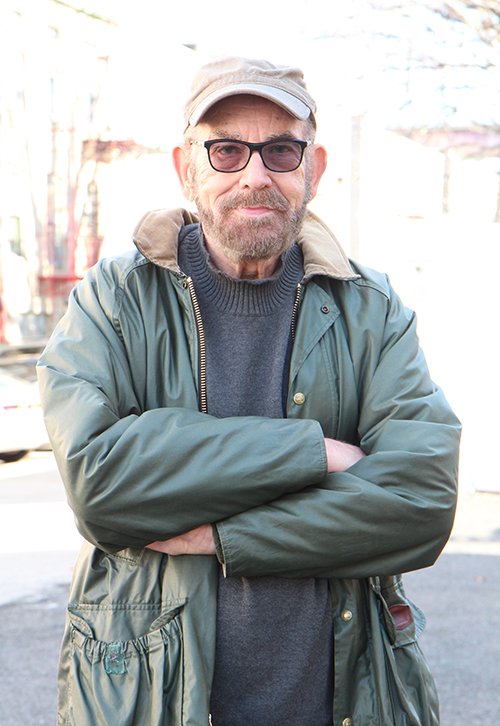 He retired a decade ago then returned to teaching part time.

So he moved back in with his mother and took a job at a St. Louis brokerage house.

“The market crashed and I was fired,” he says. “I decided to go back to school.”

He enrolled at Southern Illinois University Edwardsville to study music.

While there, he discovered a love of literature, so he majored in both.

After graduation, he worked full time as a job interviewer for the Illinois State Employment Service while he earned a master’s degree in English from SIU. 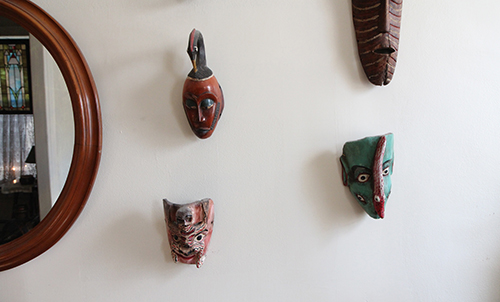 Some souvenirs of Leonard’s travels to Mexico, Africa and Indonesia.

A $5,000 fellowship took him to Kent State University to earn his doctorate.

“That was more money than I was making at my job,” he says. “It was the first time in my life that I could just be a student.”

Leonard was not on campus on May 4, 1970 when Ohio National Guardsmen shot and killed four students during an anti-Vietnam War protest.

“I was at home writing what became my dissertation,” he says. “But that summer, I was beaten up by townspeople because I had long hair and looked like a hippie.”

With his PhD in hand, Leonard moved to Wayne, New Jersey to teach English at William Paterson University. 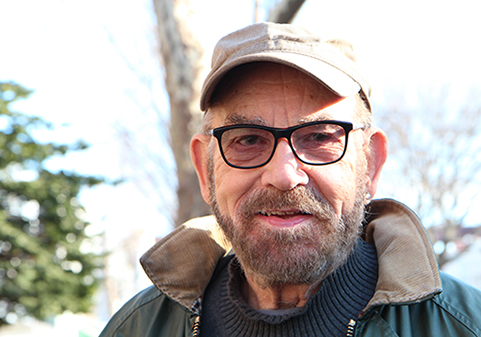 Five years later, he transferred to LaGuardia Community College, where he taught English and was the faculty mentor for the Straight and Gay Alliance.

It was while he was at LaGuardia that Leonard publicly acknowledged that he was gay and that he finally dealt with his alcoholism.

“I knew I had a drinking problem,” he says, “because I wrote about it in my personal journal every day. I was careful; I never went to work drunk, and I drank alone because I didn’t want anybody to know.”

After his longtime lover left him 20 years ago, Leonard became clinically depressed. 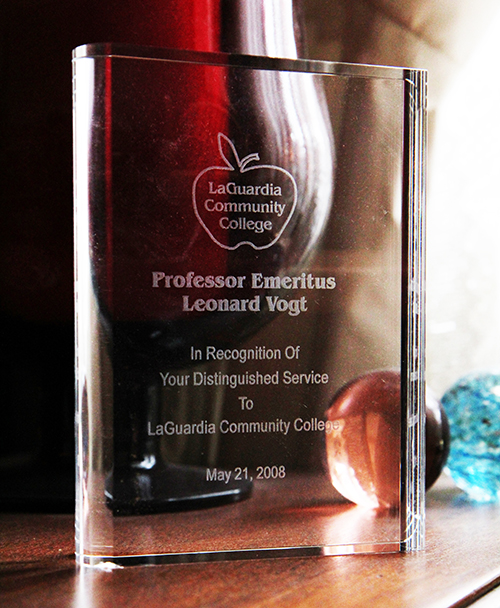 “There were two times that I drank nonstop for five days each,” he says. “I went into outpatient rehab for a year and started attending AA atheist and agnostic meetings.”

Around that time, he met Michael, who has been sober 38 years, in a gay bar in Manhattan.

He sees the humor in a pair of recovering alcoholics finding each other in a cocktail lounge.

“It was at The Monster Bar at Sheridan Square,” he says. “I was drinking seltzer. I was there to dance and pick someone up, not drink.” 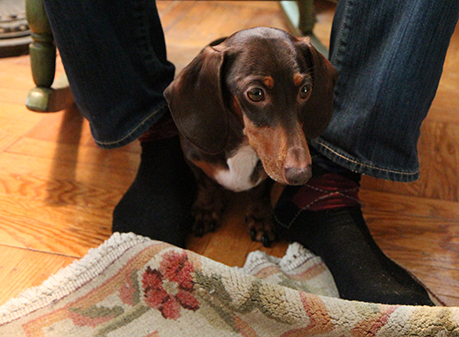 Phryne is enjoying Leonard’s retirement, too.

He spent the early years of his retirement taking college courses and traveling. Souvenirs from his trips decorate the living room.

About six years ago, Leonard returned to LaGuardia part time.

In addition to teaching, he’s the managing editor of Radical Teacher, A Social, Feminist, and Anti-Racial Journal on the Theory and Practice of Teaching.

He also joined the Park Slope Singers and started working out. 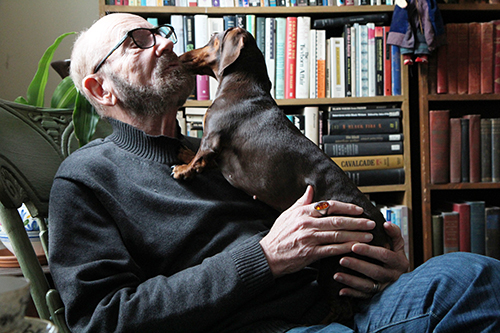 It doesn’t get better than this.

Leonard has thousands of books, many of them vintage volumes, and enjoys re-reading the classics, mostly on his Nook.

All these activities, he says, make for an exciting combination.

Phryne stands at his stocking feet and cries like a baby until he scoops her up in his arms and gives her a big hug.