A mommy, baby strapped to her stomach, is peering through a front window of SHASTYE Gallery and Play Space. 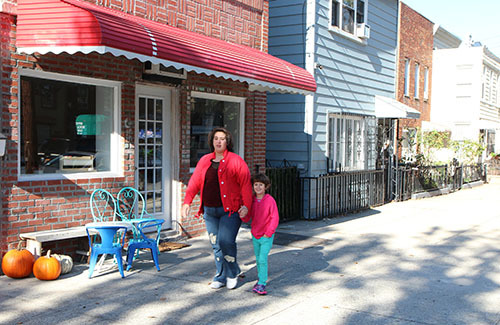 The shop is so new that there’s no sign outside, and she’s trying to figure out what it is all about.

The only thing she knows is that she feels drawn to the clean, white space. She starts snapping shots with her cell, hoping that they provide some answers. 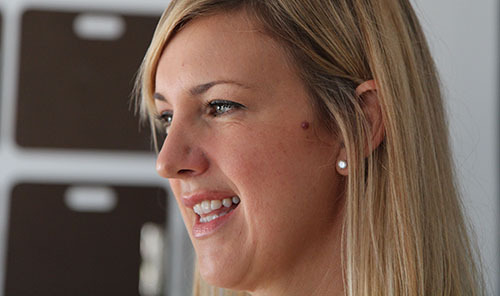 Photo by Nancy A. Ruhling
Shasta’s an artist.

What the photos cannot tell her, Shasta Molnar, who has just arrived with her black-and-white polka-dotted Frenchton, Zoya, will.

SHASTYE, she explains, is a fun art house for children.

She called it SHASTYE, which means happiness in many Slovak languages, because that’s how art makes her feel, and she hopes that every little girl and boy who comes in for art lessons and art-inspired activities will experience a similar joy.

It’s also a play on her name, Shasta, which makes it doubly artful and appropriate. 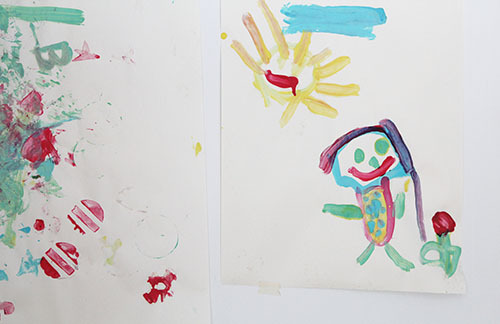 Photo by Nancy A. Ruhling
The walls are decorated with student artwork.

Shasta, an artist from Prescott, Arizona, grew up coloring her world in bold strokes, filling in its lines and shapes at the easels of her parents, George and Marcia Molnar, who specialize in Southwest subjects.

“My parents are obsessed with American Indian culture,” says Shasta, sleek and chic as a John Singer Sargent portrait. “That’s why they called me Shasta. It’s the name of a tribe, but it’s also the name of a character in the John Wayne film Rio Lobo. I don’t know what it means; they chose it because they loved the way it sounded.” 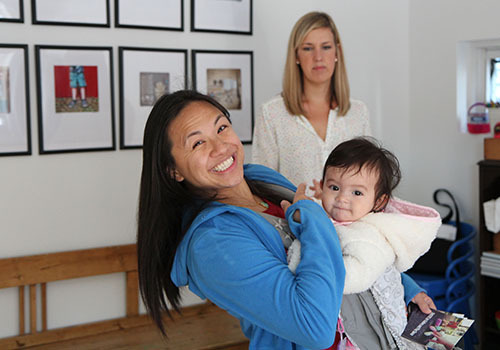 Photo by Nancy A. Ruhling
A customer stops by to chat.

The young Shasta made her premiere artistic marks with chalk and acrylics on cardboard and big rolls of paper, materials that were in abundance in her household.

“I took art classes constantly all the way through high school,” she says. “I got straights As in them.” 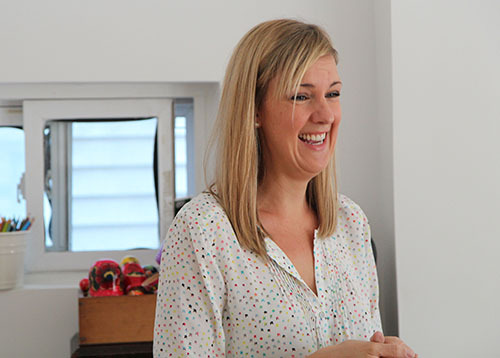 By the time it was time for college, Shasta longed to do something different. So she majored in theater instead of art.

“But I was still painting all the time,” she says.

Her first jobs — she was a theater and art coach for a private elementary school then founded a collective arts community that produced music, visual arts, theatrical and spoken-word shows — left her little time to pursue her own painting. 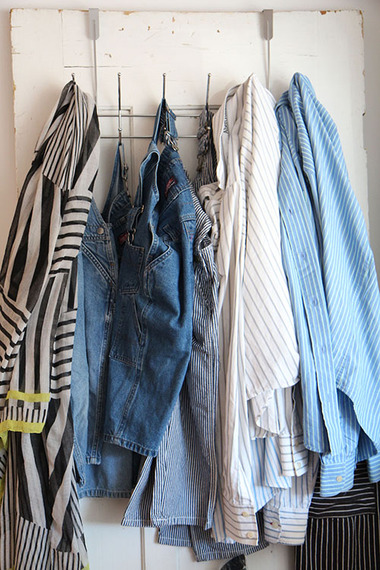 Photo by Nancy A. Ruhling
Student smocks, a still life.

That’s why she came to New York.

“I wanted to be part of something bigger,” she says. 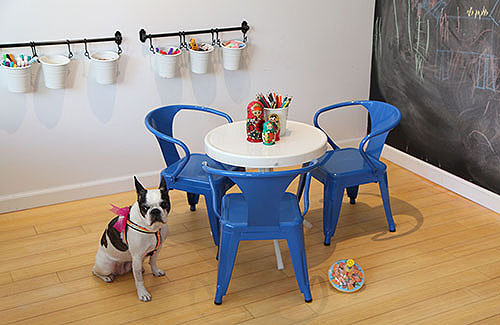 Photo by Nancy A. Ruhling
Zoya, the artist in residence.

She took up her brush again while she was a nanny for the children of actors Kevin Bacon and Kyra Sedgwick.

“I loved working for them,” she says, adding that her painting of Paulie, their border collie-black lab rescue, was the first in her collection of dog portraits. “But I was always on duty, and I wanted time to start my own family.” 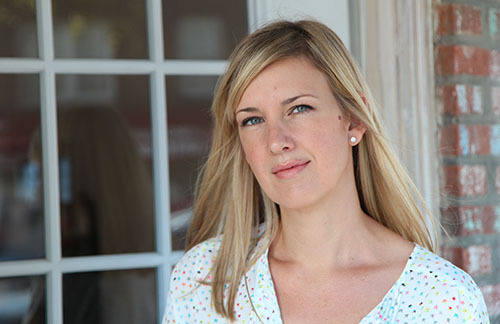 Photo by Nancy A. Ruhling
She grew up at her parents’ easels.

She had done some cooking for the couple, and she fancied that she might become a personal chef. To try out this notion in a real-life test kitchen, she took a catering job, which is where she met her husband.

“We worked the coat check together the first time I saw him,” she says. “We clicked. He had me laughing the entire night.” 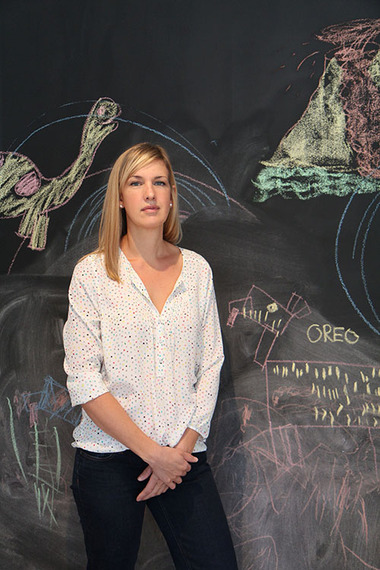 Photo by Nancy A. Ruhling
At SHASTYE, creativity is key.

The idea of opening a gallery to sell her own work was always in the back of Shasta’s mind, so she took a job with a watchmaker to learn about luxury sales.

“It was totally fun,” she says. “I worked with lots of famous people like Paul Simon and Queen Latifah.”

She was ready to strike out on her own when she found out she was pregnant. Eva, her tow-headed toddler, recently turned 2, so it seemed like the right time to re-enter the workforce. She found a gallery to represent her, and she opened the shop. 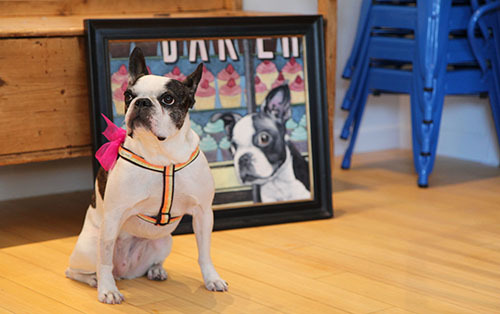 Photo by Nancy A. Ruhling
Zoya with her official portrait by Shasta.

SHASTYE, which also is a gallery for professional artists, is the perfect solution for Shasta.

“It’s close to home,” she says. “Eva and Zoya are able to be here with me much of the time.”

Shasta is excited to share her love of art with growing minds and hands, teaching her students everything from headband making to pumpkin painting. 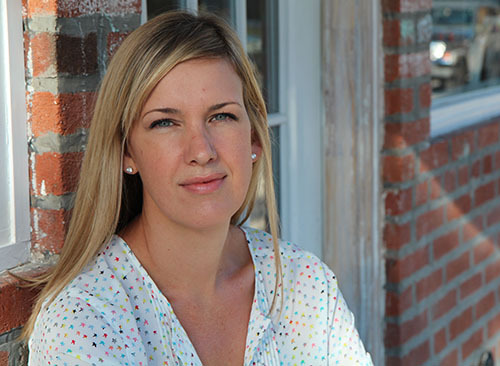 “Children need visual stimulation to develop, which is why this is also a gallery for professional artists,” she says. “I want the children to be inspired by the art they see hanging on the walls.”

Presumably, there will be a place for her own work, which includes a portrait of Zoya.

“I can’t stop doing art because it makes me so happy,” she says.

A group of parents, carrying babies, wanders in. As Shasta tells the story of SHASTYE, Zoya prances for pets.

“I encourage you to take the classes with your children,” she says. “I want us all to have fun together.”