From shaved head to bare toes, Anthony Antoine is in full warrior mode. 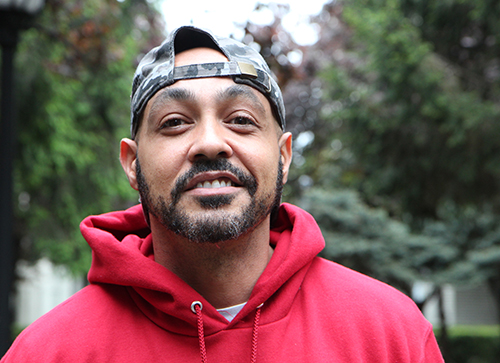 Anthony is the founder of the Astoria Warrior brand.

There can be no doubt of this because his red hoodie, camouflage baseball cap and summer slippers all shout Astoria Warrior in your face with big, bold letters.

Although it’s a new brand, Anthony’s been prepping for it his entire life.

Anthony, whose parents and grandparents are from Trinidad, was born in Astoria 43 years ago and brought up in The Acropolis apartment building.

In the beginning, the five-member family (Anthony, along with his grandmother, mother, older brother and younger sister) occupied a single apartment. Later, they moved next door into the too-small two-bedroom rent-controlled unit Anthony has called home pretty much since then. 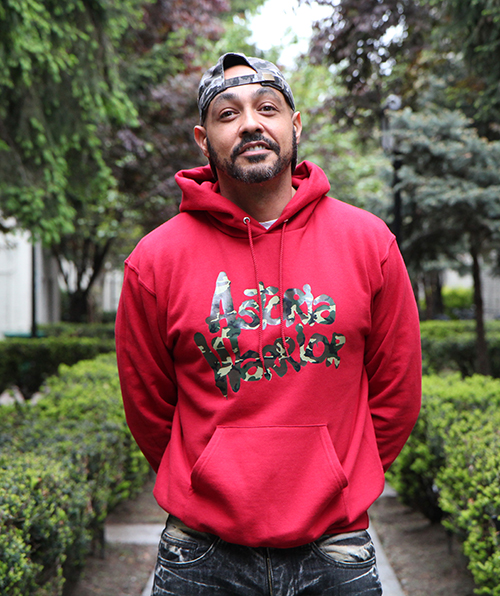 “I never met my father – he lived in Trinidad,” Anthony says. “I was raised by a single mother. It was a lot of people in the apartment. Even now, when I’m by myself, I feel the walls closing in on me.”

Anthony always had a creative mind that ran in circles instead of straight lines.

As a boy, he loved and lived to paint. Although he had artistic aspirations, he never pursued them because he didn’t feel it would be a career that would make him financially secure. 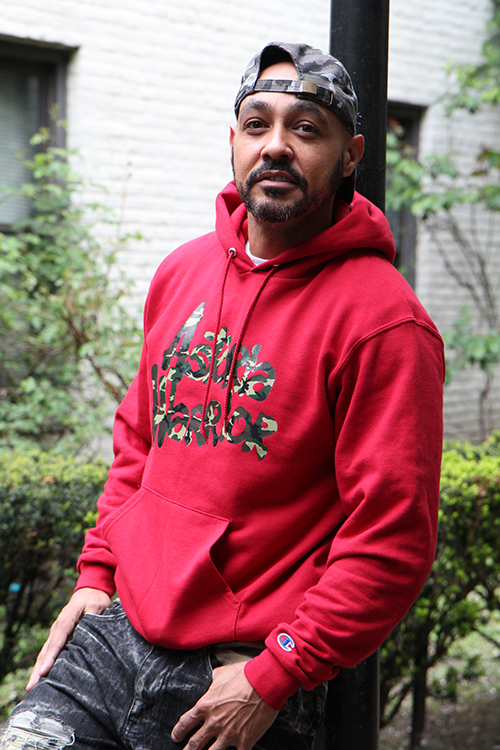 Before he created Astoria Warrior, Anthony worked in a lumberyard, a hardware store and a cable company and drove a cab.

“I was a street kid,” he says. “I spent all my time there. I got into fights a couple of times, but it was nothing serious.”

“I didn’t go to college because I was just worried about making enough money to take care of myself,” he says. 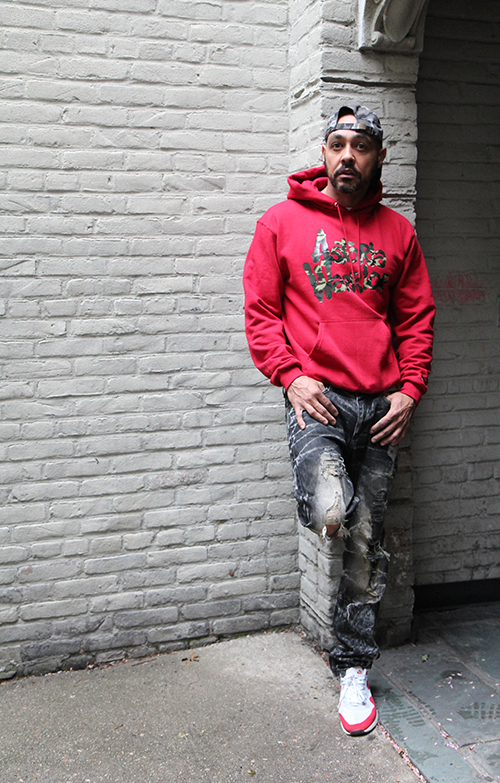 His first job was at a lumberyard in Corona that was owned by his stepfather. A decade later, he was working in a hardware store. After that, he drove a cab then spent several years as a field technician for a cable company.

“I liked all of those jobs, but I wasn’t passionate about them,” he says. “I just did them to make money.”

So in 2015, when his cable-TV job ended, Anthony took a six-month course in jewelry design. 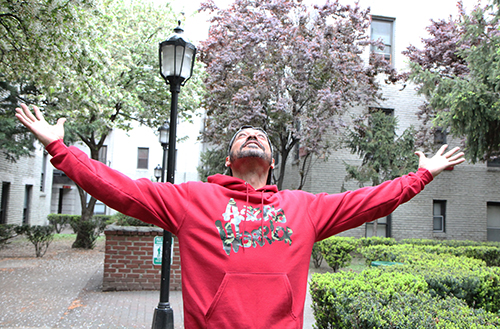 This is how thankful Anthony feels every day.

“I found it fascinating to take a plain sheet of flat metal and fashion it into a ring or a bracelet,” he says. “I also studied with someone in the Diamond District, but I quickly realized that I could not make my living doing this.”

Fashion seemed the next logical step for Anthony. Astoria Warrior, a scrawny, scrappy baby, was born in 2015. It grew up quickly to become a dope, street-wise kid.

“I took $1,000 in savings and made a T-shirt and a hat,” Anthony says. “Now, I have over 100 items, everything from flip-flops and onesies to coffee mugs and dog shirts.” 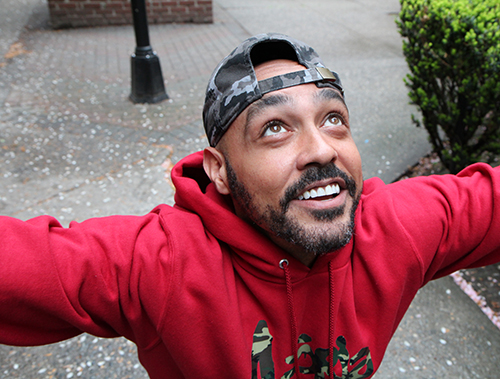 The name was inspired, in part, by the 1979 gang-fight film The Warriors.

“I used the same type font that was in the movie title,” he says. “I thought Astoria Warrior had a nice ring to it. It was appropriate because I see myself as a warrior. If you go hard at what you do and you’re passionate about it, you’re a warrior.”

Anthony, who sells Astoria Warrior at street fairs and through AstoriaWarrior.com, sees the brand as a tribute to the neighborhood that made him who he is.

“The reception to the products has been amazing,” he says, adding that he’s had online orders from as far away as Australia. “I’ve had people come up to me on the street and take selfies with me when they see me wearing the clothes. That’s what keeps me going.” 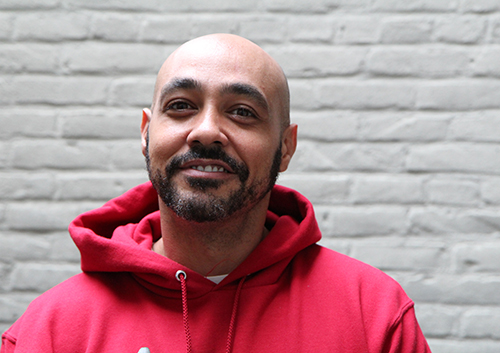 Astoria Warrior’s headquarters is in Anthony’s apartment, whose every spare space has been converted to a stock storeroom.

“I work seven days a week from the time my eyes open until the time they close,” he says. “I don’t have any employees, but when I book two street fairs on the same date, I get my sister to cover one of the booths.”

He takes only one break per year: He spends a month in Trinidad, where his brother lives, for a family reunion. 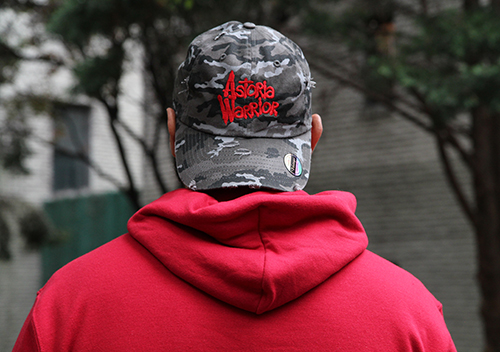 Headed for the street.

Although Anthony is hoping that Astoria Warrior becomes a household name, at least in the neighborhood, he’s also realistic.

“In life, you never know what is going to happen,” he says. “Even if I only make the minimum I need to pay my bills like I’m doing now, I’ll be happy.”

Smiling, he turns his baseball cap backwards and walks into the street, the Astoria Warrior name, writ in bright red, following him like a posse.