When the outdoor table is empty, Vincenzo Vaccaro takes a break and a seat. He lights a cigarette and in between smoke rings pours black coffee down his throat. 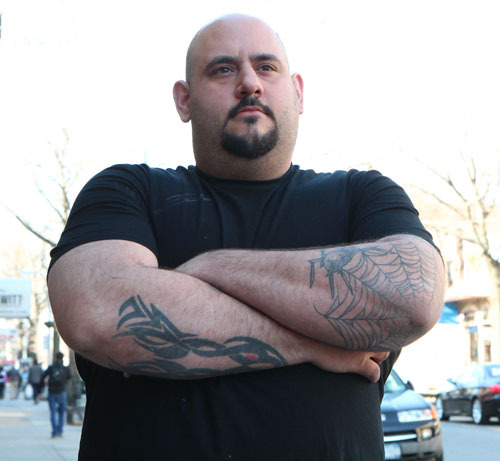 Photo by Nancy A. Ruhling
Vincenzo’s the owner of Vaccaro’s Italian bakery.

Soon, he’ll be doing what he does every day. He’ll be making pizzas and sandwiches for Vaccaro’s bakery, which he and his father, Francesco, own.

Don’t get the wrong idea. Vincenzo isn’t going to do this forever. Yeah, it’s true that he was born in a bag of flour and has been baking and breaking bread here for most of his 33 years. But as he sees it, this is merely a recurring bit part that he’s doing for dough until he starts getting big bucks for film roles.

This isn’t some half-baked idea. Vincenzo, a brown-eyed doughboy with sleeves of sailor-style tattoos, got his first acting job at 11 when A Bronx Tale was filmed at one of his father’s bakeries. He played a shoeshine boy, and a would-be start was born. 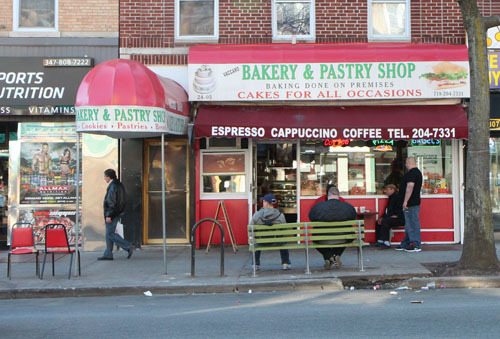 Photo by Nancy A. Ruhling
Vaccaro’s is at 28-05 Steinway St.

He says he’s a natural for the screen. He’s probably right because he’s had a lot of drama in his soap-opera life that has required him to play many parts.

In the beginning, he was the dutiful son. He was born a couple of years after Francesco, who hails from Palermo, Sicily, opened Vaccaro’s, which was and still is known far and wide for its semolina bread and cartocci.

They lived above the store, and his mother, too, worked there. Vincenzo was quite content to spend his time with babysitters because he didn’t know any better. 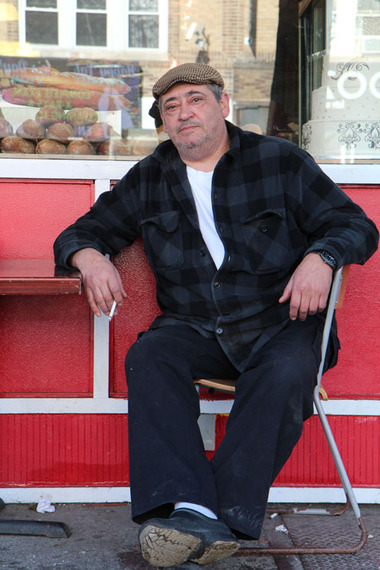 Photo by Nancy A. Ruhling
Francesco opened the first Vaccaro’s in 1979.

Vincenzo was a good kid, at least he says he was, but after he was sent to a troubled-teen military school in Florida, he became the rebellious student.

“I lasted three months until I got into a fight with another student,” he says. “He told me he was going to stab me to death while I slept, so I ran away. When they found me, I wouldn’t go back. I tried to go to school in New York, but I quit pretty soon after that.”

At 15, he took on the weighty role of full-time worker.

“I learned everything from scratch,” he says. “And I’m proud because I finally earned my GED.” 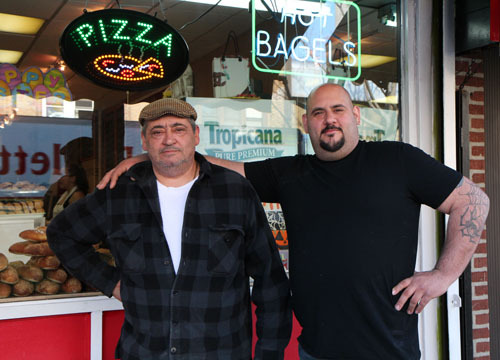 Photo by Nancy A. Ruhling
Francesco does the a.m. deliveries; Vincenzo makes the pizzas.

When his parents split and Vaccaro’s was sold for the first time, Vincenzo became a man without a purpose, playing around at odd jobs, including acting. A little later, he was cast as a husband and father.

Vaccaro’s changed hands a couple of times before the Vaccaros bought the bakery back. But when Francesco retired, Vincenzo and his sister sold it again.

“It was just too much work,” Vincenzo says.

It was around this time that his marriage failed, and he moved to Florida, where his mother lives, to start over. Photo by Nancy A. Ruhling
Taking a break together.

“I was really lonely,” he says. “I opened a pizza parlor, but that was even more work than running a bakery, especially since I was doing everything myself, so ultimately, I abandoned it and came back to Astoria.”

He met the love of his life — they just had a baby girl — and reopened Vaccaro’s with his father.

This time, as business owner, Vincenzo has big ideas for the bakery. 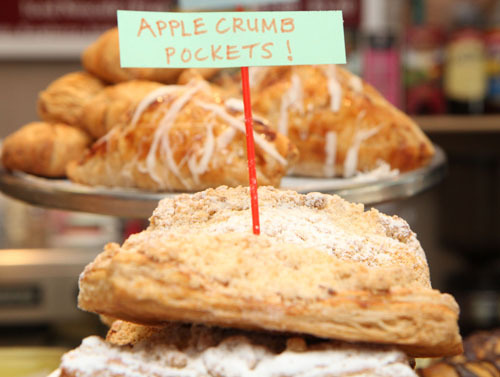 Photo by Nancy A. Ruhling
The bakery has a variety of Italian pastries and cakes.

“My heart and my brain tell me to keep it up,” he says. “But it’s physically hard for me to do this work because one of my legs is longer than the other, and I have a lot of back trouble because of it.”

As for the acting, Vincenzo’s had speaking parts in several recent films, including Penguin: Bird of Prey, and starred in the documentary Doughboy: Help Wanted. He’s also writing a screenplay, something that involves conflict between a father and son that may or may not be based on his real life. 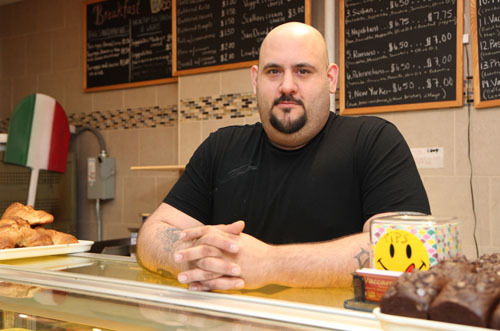 Photo by Nancy A. Ruhling
The counter is Vincenzo’s daily stage.

At 6-foot-1 and 300 pounds, Vincenzo looks fierce, so he gets offered bad-guy parts. He thinks he’d be perfect for a recurring role on Law & Order: SVU.

It could be the tattoos. Jesus Christ looks down from the top of his right arm, giving his blessing to an angelic maiden, who is modeled after Vincenzo’s girlfriend. 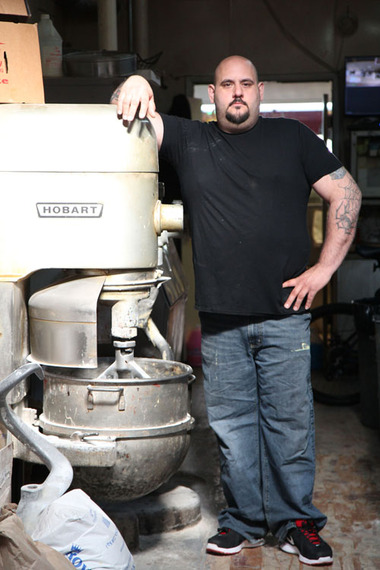 Photo by Nancy A. Ruhling
Vincenzo is cast as the tough guy.

“She saved my life,” Vincenzo says. “I was a slut, hooking up with every woman I saw, before I met her. I’ll never marry her, because I’m not the marrying kind, but I will stay with her forever.”

His perfect love is protected by the ruby-eyed space-creature face that snakes its way from his elbow to his wrist.

The left arm, well that’s a whole other story in ink. 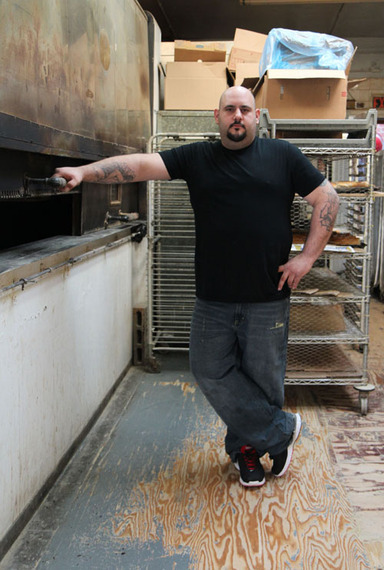 Photo by Nancy A. Ruhling
For now, he’ll keep baking.

“I’m lovable, but I do have a dark side,” Vincenzo says. “That’s why this arm has a spider web and an evil wizard giving everyone the finger.”

As Vincenzo knows, life is not like a black and white cookie. Roles roll into each other, crashing and tearing against time.

That’s why he’ll be back at Vaccaro’s. Tomorrow. And the next day. And the day after that.