It is what the masked men did to her before they took the money that keeps Sajida Gulamrasool up at night. 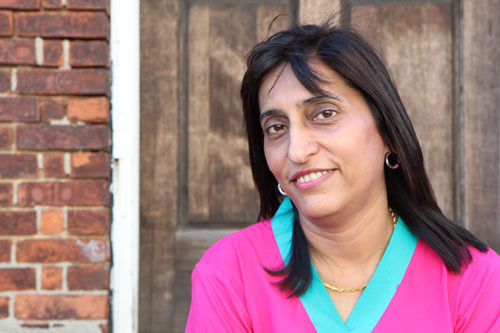 Photo by Nancy A. Ruhling
The robbers put a gun to Susan’s head.

They pressed a gun to her head. It was big and black and felt cold against her skin.

“If you scream, we will rape you; the four of us will take turns.” That’s what they said as they pinned her arm behind her back, dragged her down the stairs and threw her against the hallway wall. 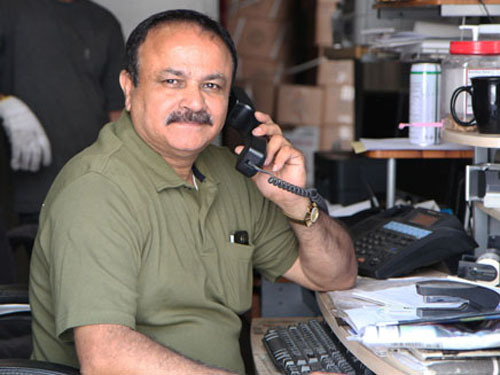 Photo by Nancy A. Ruhling
Mack was away on a business trip.

Short and slight, Sajida’s as delicate as a dendrobium. It’s a miracle they didn’t break her bones along with her spirit.

Sajida, who has learned to be called Susan since coming to this country, and her London cousin had worked all day at Fender Bender, the wholesale auto-parts company started by Susan’s husband, Mack, two decades ago. For three years, the couple have rented and lived in the house next door to it.

Mack, a solid man whose black mustache is sliding to silver, was in Texas for business. He was glad that someone could keep Susan company and help her staff the five-person company during his absence. 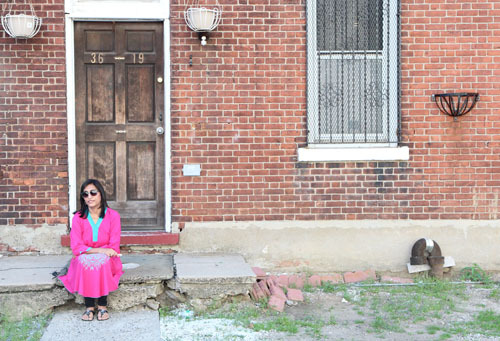 That Friday had been a busy one. Susan deposited more than $10,000 in cash in the top drawer of the living room desk. She didn’t think to put it in the floor safe; she was in a hurry to take her cousin to dinner at a Lebanese restaurant on Steinway Street. Besides which, she and Mack were in the habit of storing money there temporarily before banking it.

It was nearly 11 p.m. when Susan and her cousin got back home. She had just phoned Mack from the street to assure him that all was well when what the police report coldly called the “forced entry” took place on May 2. 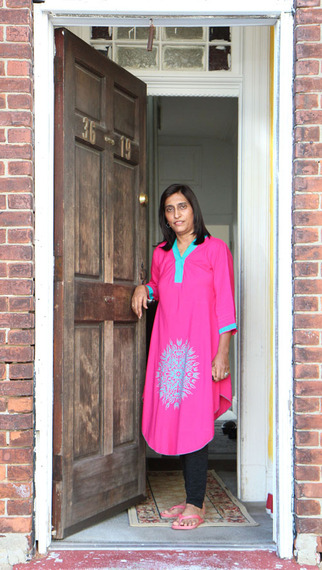 Photo by Nancy A. Ruhling
The robbers came in the front door.

Susan and Mack, who are from Karachi, Pakistan, were introduced in London. She had come there with her family when she was 10, and he had left his native country to study at Sheffield University before becoming a travel agent.

It was an arranged marriage. Mack grins like a schoolboy when this is mentioned. Sometimes he still can’t believe his good fortune. 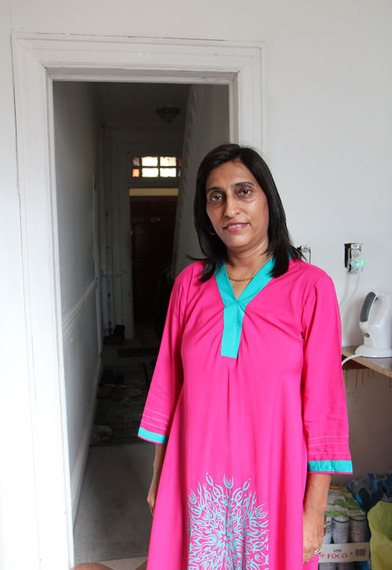 Photo by Nancy A. Ruhling
They have rented the house since 2011.

They exchanged vows four months after their first meeting.

“We were not allowed to see each other alone or go out on dates,” Susan says. “My father was a very strict Muslim — Mack could only see me at my parents’ house while they chaperoned.”

Mack had met several women, but he knew Susan was the one because she told him she was willing to go back to Pakistan. 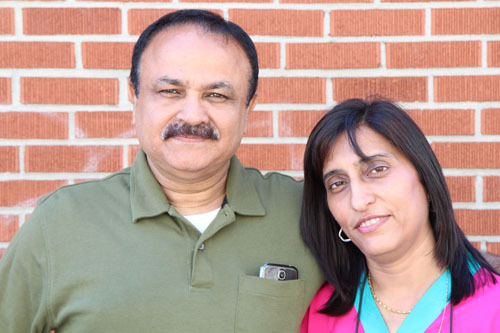 Photo by Nancy A. Ruhling
Theirs was an arranged marriage.

They did, indeed, spend a few months there after their wedding, but in short order they decided to seek their fortune in New York.

“His family was in Karachi, mine was in London,” Susan says. “We wanted neutral territory.”

Susan worked for a short time then quit when she became pregnant with their son, who is 24. Five years after their arrival, Mack opened Fender Bender, with Susan as his salesperson. 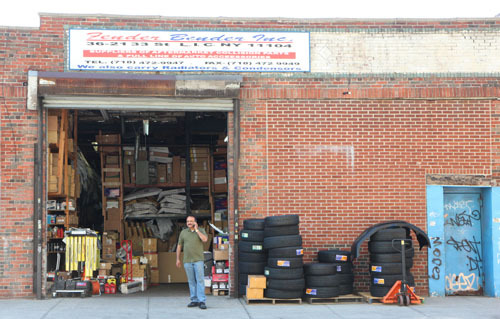 Photo by Nancy A. Ruhling
Mack founded Fender Bender in 1993.

Through the years, they saved enough money to buy a modest retirement home in Orlando, Fla. Susan shuttles back and forth, forwarding calls so she never misses a day of work.

They’ve become accustomed to working six days a week, 12 to 16 hours a day. After dinner, Mack sits down at the living room computer and places overseas orders before going to bed.

Mack travels quite a bit, and up until the robbery, Susan never minded being alone.

But she can’t stop reliving what happened. She still hears her cousin shout as the four masked men, dressed in black, forced their way into the house and pushed him to the floor, pinning him down and covering his head with a jacket.

Susan had been walking up the hallway stairs. She had made it to the landing when they grabbed her. A gloved hand was placed over her mouth, and her teeth clamped down on one of the fingers. 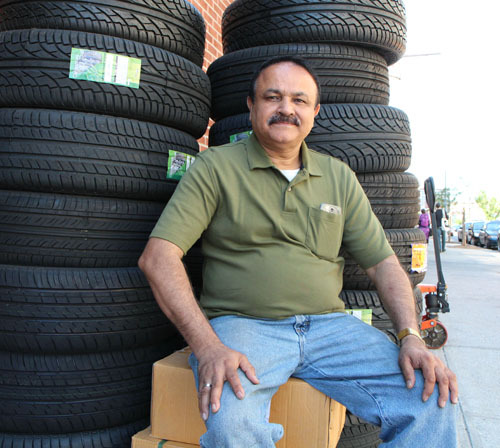 Photo by Nancy A. Ruhling
The robbery has made Mack consider moving to Florida.

“It was all finished in less than five minutes,” she says. “But to me it felt like a lifetime.”

The police and FBI responded, but there are no leads on the robbers or their getaway car. Video cameras from several neighboring businesses give but ghostly glimpses of the robbers, who lay in wait four hours for their prey to return home.

“I was told that the police do not have resources to pursue the case,” Mack says. “This I do not understand; I have paid my taxes every year. I offered to pay, but I was told that that’s not how it is done. I want to hire a private detective to track them down, because I don’t want this to happen to anybody else.”

(According to Sgt. Carlos Nieves, “Detectives are actively investigating and have remained in contact with the complainant. The detectives have also circulated wanted posters offering a Crime-Stoppers reward of up to $2,000 for information leading to an arrest and conviction of the person(s) responsible.”) 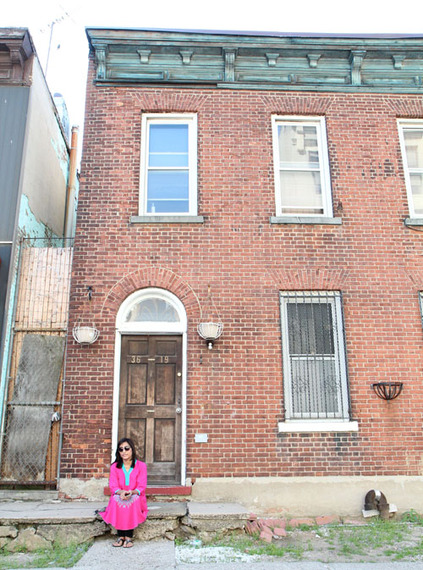 Photo by Nancy A. Ruhling
For Susan, it’s no longer home sweet home.

Mack and Susan no longer keep money in the house. It is secured in the safe at the warehouse, which is blanketed with security cameras.

“I have five more years on my warehouse lease,” say Mack, who is 56. “Then we will move to Florida.”

Susan may not make it that long. Ordinary things — a door slamming, people shouting on the sidewalk, men walking in the shadows of night — terrify her. She’s constantly looking over her shoulder, and when she wakes up in a panic in the middle of the night, Mack gets up to make her a cup of tea.

For now, they’ve put protective film on the barred first-floor front windows so no one can see into the living room. And they keep the black mini blinds closed to the outside world.