“You must have lunch,” declares Joanna Nana Loiselle. The owner of Telly’s Taverna, a ferociously vivacious blonde whose eyes change color from green to blue to hazel with her outfits and her moods, is drill-sergeant decisive on this matter.

“Let me make you a nice fish, I got a red snapper fresh last night, and you MUST try it.”

In Greek, she tells the waitress what she wants: Nana’s green salad. Kefalograviera. Oh, you can’t have lunch without the dip platter — taramosalata, tzatziki, skordalia and kafterie. 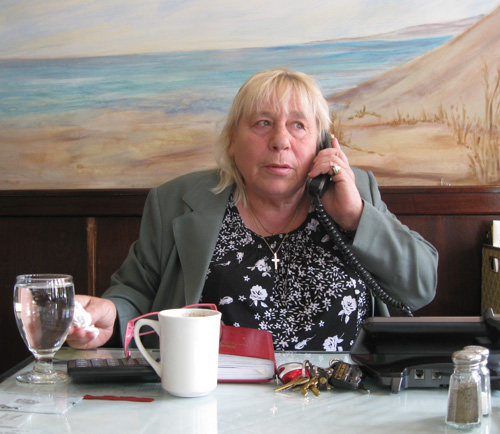 Photo by Nancy A. Ruhling
Nana is the one constant on the menu at Telly’s Taverna.

The table is full, but it’s not half as full as Nana’s life. Where to start? We’ll nibble on the salad and the dips while we talk about her early life in Greece and save the red snapper and her adventures in the restaurant business for the main course. Dessert? Nana’s the honey on the loukoumades.

First of all, nobody calls her Joanna. She’s been Nana ever since she can remember and surely much longer than the two decades Telly’s Taverna has been in business. There’s no Telly at Telly’s any more, but Nana might as well be Telly because everybody associates Telly’s Taverna with her.

Nana grew up in Athens, one of three daughters of a not-so-well-off family. She didn’t much like school, but she did love work. She probably got that from her father, who worked two to three jobs to support the family. “When I was 10, I used to do errands for the neighbors to make money,” she says.

She finished elementary school at 12 and enrolled in beauty school. That’s where her book-learning education ended. “I didn’t like being a hairdresser, so I got my parents to fill out papers to allow me to work in Germany,” she says. “I worked in a lounge in a Hilton Hotel serving drinks.”

When she was 19, she got married to a Greek man and had her first child. “The marriage didn’t last,” she says. “My husband wasn’t nice to me.”

She married her second husband, an American military man, when she was 22, and shortly thereafter, in 1966, they moved to the United States, where she had daughter No. 2. “It was a military life,” she says. “We must have lived in every state in the union.”

When that marriage ended after seven years — her husband fathered a child with another woman overseas — Nana and the girls were on their own. “I don’t hold any grudges against him,” she says. “He was a nice guy, but these things happen.”

Nana took work wherever she could find it and wherever it led her. She started out in California, working in a restaurant, then moved on to Arizona, where she had a supper club that virtually closed before it even opened. For a short stint, she worked in a Las Vegas casino then at a country club in Houston. Finally, she made it to Astoria, where she knew there was a large Greek community. 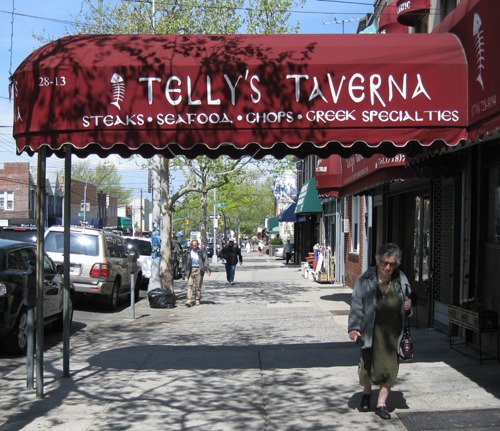 Photo by Nancy A. Ruhling
Telly’s Taverna has been a neighborhood fixture for two decades.

“I worked so hard all my life,” she says. “I didn’t get married again because I was so busy working and taking care of my daughters, and I didn’t want any more problems in my life. I’ve never been on welfare, and I never had to ask anybody for money. I got $100 a month in child support, that’s it. I was lucky because I always had good bosses.”

Her eyes well up with tears, and she dabs at them with her white linen napkin. “Forgive me, I get so emotional sometimes,” she says.

The phone rings, and she stops crying long enough to take down a reservation in her little red book. “It had always been my dream to come to New York because I knew there were so many breaks here, and it’s the center of the world.”

She got a job working at Elias Corner and met the man who would become her business partner in the very building that houses Telly’s Taverna. “Another restaurant had been in here, and when it closed, the landlords, who I knew from growing up in Greece, asked if I wanted to rent the space,” she says. “I didn’t hesitate to say yes.”

Telly’s Taverna, which featured Nana’s grilled whole-fish dishes at a time when such fare was a novelty, was an instant success. “On opening night, people were lined up outside,” she says. “We sold so much that I had to go to the fish market the next morning.”

The clients expect her to be at Telly’s seven days a week, and she doesn’t want to disappoint. She does everything from taking reservations over the phone to supervising the kitchen staff and folding napkins. 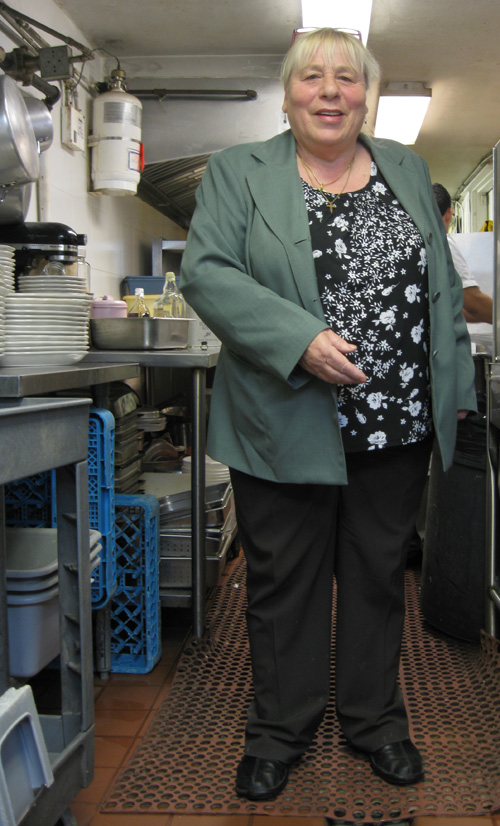 Photo by Nancy A. Ruhling
Nana is the kindly queen of the kitchen.

“I never realized when I started how much people would love and support me,” she says. “It’s not all about money in this business. I have three generations of clients coming here, and I’m happy that I can make people happy with a nice meal. And I’ve never had a bad customer.”

When the time comes, she will turn Telly’s Taverna over to her younger daughter, Dianna, who works there with her. And at 67, she has cut back on her schedule. On Tuesdays and Thursdays, she only works half days, but that’s because on Mondays and Wednesdays after the restaurant closes she goes to the Fulton Fish Market in the Bronx. She usually doesn’t get back until 5 or 5:30 a.m.

Although she can’t imagine life outside Telly’s Taverna, Nana says that if she did have some free time, she’d like to volunteer with an organization that rehabilitates young drug addicts. “I’ve seen many families suffer because of this,” she says, her eyes, now blue, tearing again.

Nana hasn’t ever had the luxury to think about all the things she did and didn’t get to do. “I have such a big, beautiful life,” she says. “And I didn’t even tell you half of it. Someday, I should write an autobiography. If I really started thinking back about it … “ 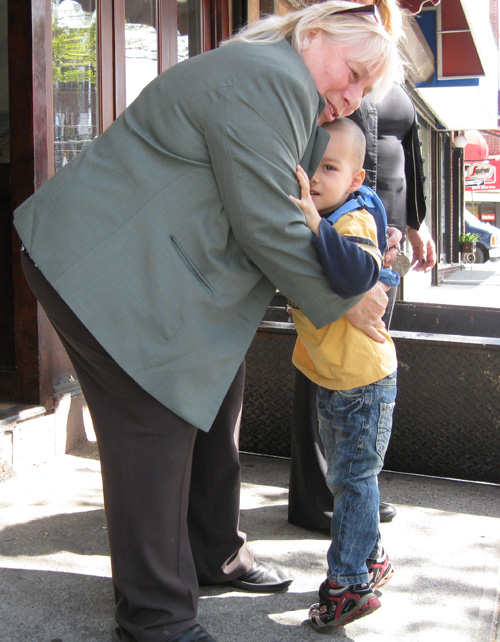 Photo by Nancy A. Ruhling
For Nana, customers are family.

Her eyes, now green, are leaking again as if she has been chopping onions. She gazes out the window and sees a little guy in a big stroller. It’s her friend’s nephew! She runs outside to give him a book and a Nana bear-hug. He follows her into Telly’s, and she piles two oranges and a big shiny red apple into his pencil-thin arms.

“I love you,” she says in a little-girl voice.

As his mother takes the fruit, the boy blows Nana a kiss and walks away, another satisfied customer.