This is a love story. You know, boy meets girl. Boy gets girl. Girl gets boy. To follow her to New York.

Fumihisa Matsueda pulls a white plastic milk carton up to the coffee table and flops two pancake-thin black and white cushions on it to make a makeshift chair. He pours himself a glass of orange juice, rolls what will be the first of several cigarettes and begins his tale.

Fumi — that’s his nickname so we might as well go with it — was 3. The talking of his parents woke him, and he remembers seeing the cuckoo clock in their home in Ashikaga, Japan as he followed their angry voices.

“Don’t make my mommy cry,” he yelled as he used his little arms to shield his mother from his father’s torrent of warring words. 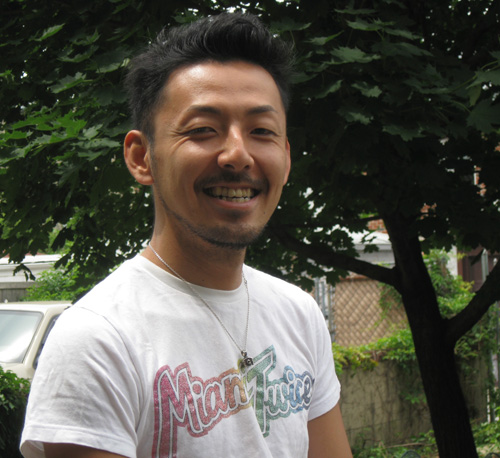 Photo by Nancy A. Ruhling
For Fumi, love means getting on a plane to follow your heart.

As smoke swirls around his head, Fumi, a knife-thin man with grease under his fingernails and form-fitting designer jeans, shifts in his seat, hugging his legs to his chest, revealing his lavender toe socks.

Things were never the same after that. His parents did what nobody in Japan of the 1980s was supposed to do — they divorced.

“I never saw my father again,” he says, adding that the split occurred right after the birth of his younger sister. “My mother wanted to cut all ties with my father, so she didn’t ask him for any support money.”

Fumi’s mother took a part-time job as a typist, but it wasn’t enough to pay the bills, so her parents took the family in.

“I was the only kid in school who didn’t have a father,” Fumi says. “I remember once the teacher asked each of us what our fathers did for a living. Even though the teacher knew I didn’t have one, she asked me anyway. I didn’t know what to say so I said he baked cookies.”

Ah, school. Fumi, a spontaneous soul, didn’t know what he wanted to study. It almost wasn’t a problem because he all but flunked the practice exam to get into college.

“I didn’t have money to go to a private college,” he says. “And I had only three months to study for the real exam so I could get into a public one. My score was twice as high as it was on the practice.”

He settled on Saitama University. He got a scholarship, and although he needed more money, he wouldn’t allow his mother to finance his future. He worked his way through school, taking a job in a doughnut shop and as a tutor. He planned to be a physics teacher.

It was in college that he rode his first motorcycle. “I was poor, so I bought one that needed repairs, and I taught myself how to fix it,” he says. 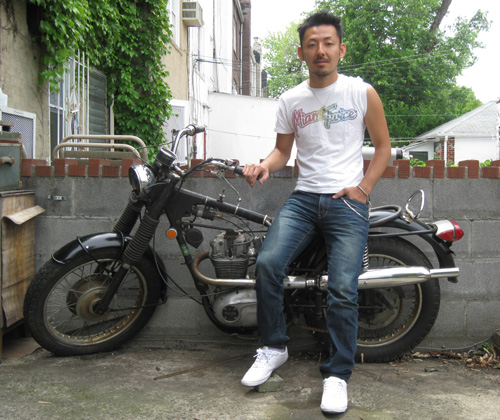 Photo by Nancy A. Ruhling
In New York, Fumi has pursued his other passion — motorcycles.

He got his degree — and a license to teach elementary, junior high and high school physics — but never made it to the classroom. “I realized that I needed more experience about life to be a teacher,” he says.

Although he accepted a job with a motorcycle company, he turned it down at the last minute. “I had just bought my dream car — a 2002 BMW. I had spent all my money, $1,500, on it,” he says. “It was a bargain, but it needed lots of work, so I wanted to spend time fixing it.”

In the meantime, he had become acquainted with the owner of a bicycle shop and persuaded him to convert it to a motorcycle shop. “I became the manager at 23,” he says, “and I made so much money that I became overconfident. I realized I didn’t want to live that way, so I quit.”

That’s when his travels began. “I had never been to any other country, and I’d never been on a plane,” he says. “I contacted a study-abroad company, and as soon as I saw photos of Australia — the big houses with the high roofs and the sea — I said, ‘When can I go?'”

During his year Down Under, Fumi learned to make surfboards and to speak English. When he returned to Japan, he took what he hoped would be a temporary office job before getting into another study-abroad program.

It was there that he met the girl. They started out as friends, but when they quit around the same time, they became a couple. “When she got a job offer in New York, I didn’t want to come,” he says. “I wasn’t interested in New York, but I was interested in her.”

So in October 2007, after getting a student visa to study English, Fumi found himself walking the streets of Manhattan looking for what he missed most — motorcycles. He didn’t see any, so he went into a couple of bicycle shops. 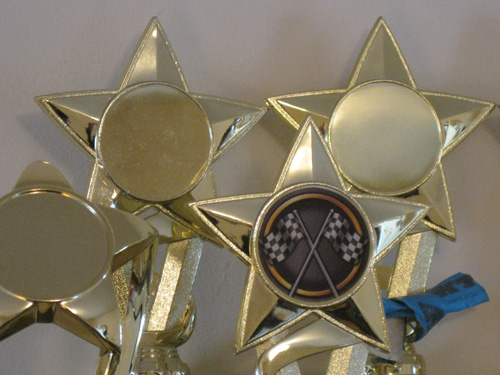 Photo by Nancy A. Ruhling
Fumi rides to win and has the trophies to prove it.

“One day, I thought to ask at one of the bicycle shops whether there was a motorcycle shop,” he says. “It turned out there was one right across the street.”

Fumi quickly became a fixture at Sixth Street Specials. “I was so excited to be around motorcycles again that I volunteered to help out,” he says. “I started by cleaning the floors, and then I did a welding job.”

Fumi, a fan of flat-track racing who is known on the circuit for his signature white shoes, has earned a slew of golden trophies on his weekend jaunts. “The first time I saw the riders sliding was in a magazine in Japan,” he says. “I thought it was so cool.”

With 2 1/2 years remaining on his visa, Fumi knows only that he holds his future in his heart. “My girlfriend gave me the opportunity to come here, and I want to help her dreams come true,” he says. “I don’t want to leave New York, but I’ll follow her wherever she wants to go.”