The secret’s in the squeegee. That’s what gets windows streak-free, squeaky clean. So says Barry Feirstein, the guy who does windows for a living.

“Years ago, when I first started and people asked how I got the windows so clean, I used to say, ‘It’s a secret.'”

Barry, a mountainous man with legs of steel and an impish twinkle in his eye, chuckles. He’ll never in a million years figure out how he got away with that subterfuge. 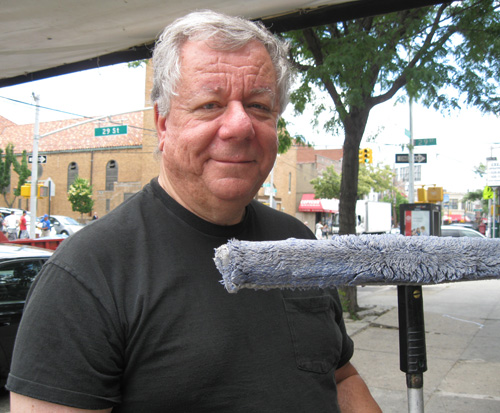 Photo by Nancy A. Ruhling
Barry washes windows and keeps watch over Astoria.

He wheels his white bucket of water over to the window to show how it’s done. He dips his wand into the soapy ammonia water, first one side then the other, attaches its to a shiny aluminum extension pole and like a fan dancer, waves it across the window then squeegees it clean.

He stands back to admire his work. Even though it’s high noon, the window is mirror clean, and he can see his own big, broad reflection and the soul of the neighborhood as the people pass by. The grit and the grime are gone; our world is brighter because of Barry.

There was a time, why it was more than 20 years ago — can it really be that long? — when the only thing Barry knew about windows was that somebody else cleaned them.

Barry, who grew up in the Bronx playing stickball and rooting for the Yankees, was a white-collar guy. When he was at City College, he worked part-time at a department store. “I got too interested in retail, and I quit school after two years,” he says. “I became an assistant department manager in ladies sportswear at Alexander’s.”

By this time, he was married. He had met his wife, Judi, when she was 15 and at 20, when he walked down the aisle with her the year after her high school graduation, he was a year shy of legal age. His mother had to give her permission for him to get the license. 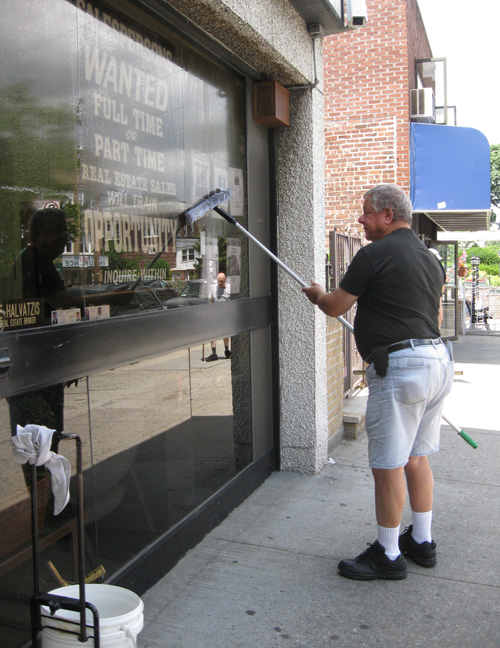 Photo by Nancy A. Ruhling
Done Barry’s way, window washing is an art.

“I guess you could say it was love at first sight,” he says, adding that they have three children. “We were so young; what did we know? Next year, we will have been together 50 years.”

“After Lerner was taken over by The Limited, things changed,” Barry says. “They told you everything you had to do, and I didn’t like it. So after 30 years in retail, 22 of them at Lerner, one day I turned in my keys and left.”

That was two decades ago. Barry was 48 — too young to retire yet too old to want to make a career change.

A chance conversation with an old friend from his Boy Scout days who happened to be a window washer got him into the business.

“It was a very big transition; I was used to wearing a suit and tie,” he says, looking down at his T-shirt, jeans shorts and black New Balance walking shoes. “I was working in 100-degree weather and 20-degree weather. But I said, ‘This is my own business; I’m working for me. It’s not so bad.'” 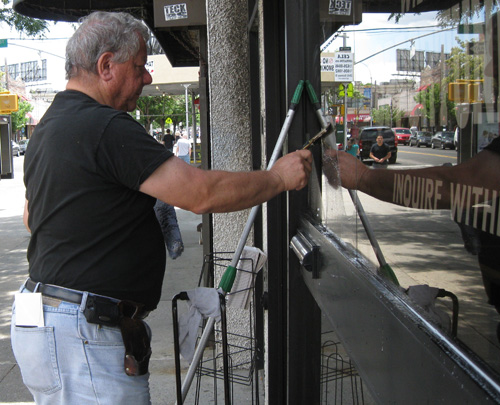 Photo by Nancy A. Ruhling
The secret? Barry’s sparkling personality.

A short time later, he paid $105,000 for two routes, plus $35,000 for a third later on. He borrowed the down payment from his mother, becoming a partner with the former owner until he paid off the purchase price.

Five days a week, he fills the trunk of his 2007 navy blue Chevy Malibu with buckets of water. He searches for a parking space, which in Astoria is about as easy as landing on the moon, then hits the sidewalk, wheeling his plastic bucket behind him.

“I used to carry the bucket,” he says. “But after I had surgery for prostate cancer in 1998, I start wheeling it. One gallon of water weighs eight pounds. My bucket holds five gallons.”

He washes his first window at 7 a.m. and sometimes doesn’t finish until 4 or 5 p.m.
“I’ve never clocked myself, but on my heaviest days, I bet I walk five miles,” he says. 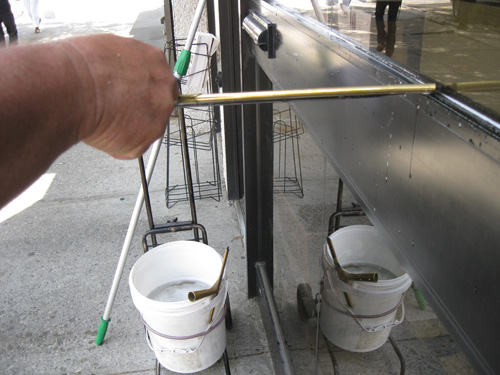 Vacations? What are they? On weekends, he runs errands and spends time with his children and grandchildren. Up until January, when his mother died, he spent every Sunday with her. He plays poker in Manhattan with the guys every other Wednesday night. He collects casino chips and stamps.

“I have more than 600 chips,” he says, “and every single U.S. commemorative stamp from 1920 to today. I’ve never counted, but I probably have hundreds.”

Aside from his 1998 operation, which kept him in the house for a month, Barry hasn’t missed a day of work.

There’s one thing he never does at home: Clean his own windows.

Although there’s an art to window washing — remember the squeegee — what Barry really likes is talking with his customers.

“I’m like their yenta,” he says. “I see everything that’s going on in the businesses in the neighborhood, and we schmooze.”

There aren’t many window washers any more, and at 68, Barry works a reduced route. It’s not like the old days when he got up at 3 or 4 a.m. just to squeeze everyone in. 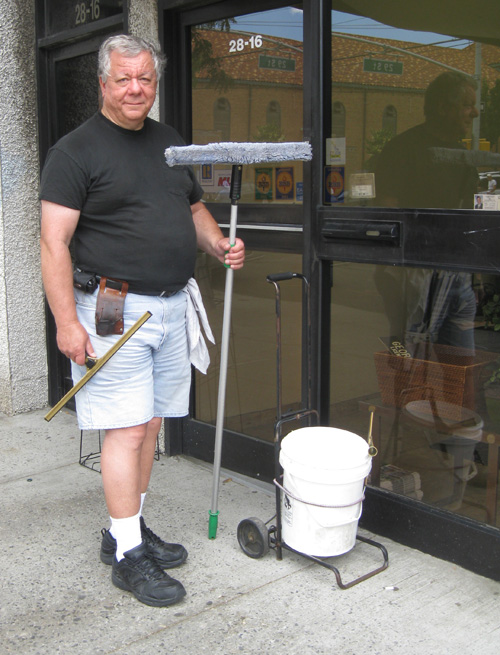 Photo by Nancy A. Ruhling
For Barry, work is windows on the world.

“A lot of the old-time stores have gone out of business,” he says. “And picking up new ones is more difficult.”

That suits Barry just fine. “I intend to keep doing this until I can’t do it any more,” he says. “There’s nothing I’d rather be doing.”

Besides which, he says, “getting out of the house keeps my marriage intact.”

As he wheels his bucket of water away, the sun highlights his reflection in the newly cleaned window. Moments later, he’s up the street starting all over again, putting wand to water.