John McDonagh, in a hoodie and hooligan cap, is not behind the wheel. It’s his day off, and he’s at the diner having his breakfast between errands that will take him all over the place before the sun sets.

John, a fine fellow with a wee bit of a brogue and a wide sweep of brown-polish hair, is having a cup of tea with milk and a bacon and English muffin sandwich. 55 Stan, where he leases a cab every day he’s working, is only a couple blocks away. 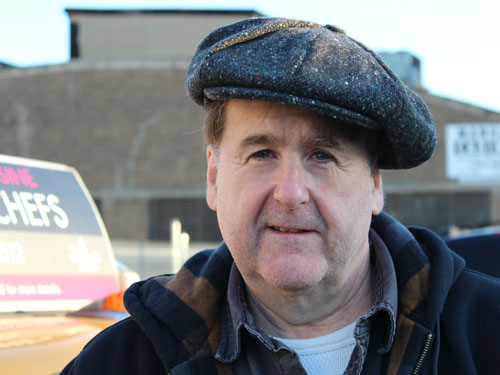 Photo by Nancy A. Ruhling
John gets behind a lot of things, including the wheel.

If his name and his face seem familiar, it isn’t necessarily because you’ve been in his cab. You may have seen one of his comedy routines, spotted him among the crowd scenes in Boardwalk Empire or watched him show off the streets of Queens in Stephen Fry in America.

Or perhaps you’ve listened to his fringe-fiery brand of liberalism on Radio Free Eireann, the WBAI show he’s been hosting and producing for the last two decades.

Maybe you remember C.A.B. (Cabbies Against Bush), the wall-of-yellow protest John organized during the GOP convention in Manhattan in 2004 in which he offered “1 free ride to Kennedy or Newark airport for any delegate or fellow GOP member who will fight in Iraq!”

In case you’re wondering, it didn’t include tip and toll. John, after all, is nobody’s fool.

You may have run into him when he was the campaign manager for Randy Credico, the political comedian/activist who was trying to unseat Sen. Chuck Schumer in the 2010 Democratic primary.

John and Credico made quite a stir when they showed up for the 2009 sentencing of Bernie Madoff holding signs that said, “Clemency for the Ponzi one.”

Photo by Nancy A. Ruhling
55 Stan, where John picks up his cabs.

“The people who lost money went beserk,” John says. “We were making the point that Madoff did nothing different from the rest of Wall Street, and they all should be locked up. We said he should get probation as a first-time non-violent offender.”

Or, in the old days, you may have spotted John paling around with fellow activist Grandpa Munster, aka actor Al Lewis.

“I’m famous for not being famous,” John says, “because I’m still driving a cab.”

Hey, it’s a living. Well sort of. John’s so busy with his extracurricular activities that he only plays the role of checkered cabbie three days a week.

John’s the son of working-class Irish immigrants who taught their six children the value of a dollar. “Our parents always wanted us to get union jobs,” John says. 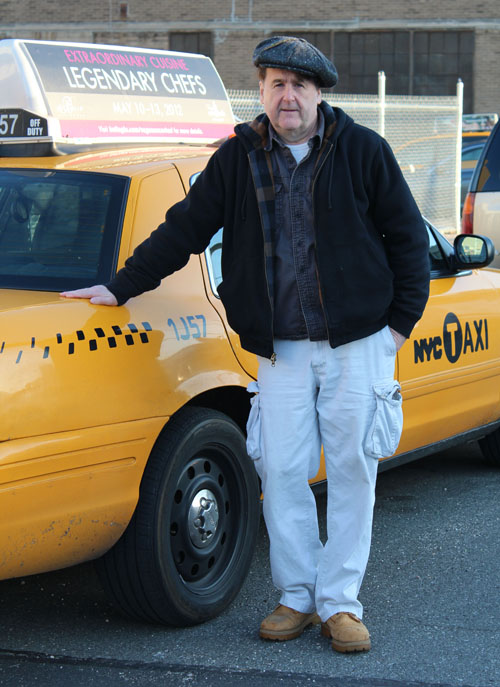 Photo by Nancy A. Ruhling
John plays the role of cabbie three days a week.

But when John graduated from high school, there was no work to be had amongst the ranks of firefighters and cops. So he enlisted in the Army, which sent him to Germany for two years. “I never left the base,” he says.

He tried his hand at bartending and construction, but nothing really took until he got his hack’s license three decades ago.

“I liked the handiness of it,” he says. “You could pick your own days to work, and you could leave it for a while and come back to it.”

John took full advantage of the flexibility, hitchhiking from New York to California, visiting London, India, Israel and New Zealand and even setting up house in Australia for a while.

Driving a cab also gave him time to act out his activism; one of his latest human-rights crusades is seeking reparations for victims of medical experiments the United States performed on Guatemalans after World War II.

Twenty years ago, he met the girl of his dreams. He was the editor of The Irish People newspaper, and she was the editorial writer. Eventually, they moved into his parents’ house, where they are raising three children. Every year, the family visits Ireland, where John’s uncle has a farm. 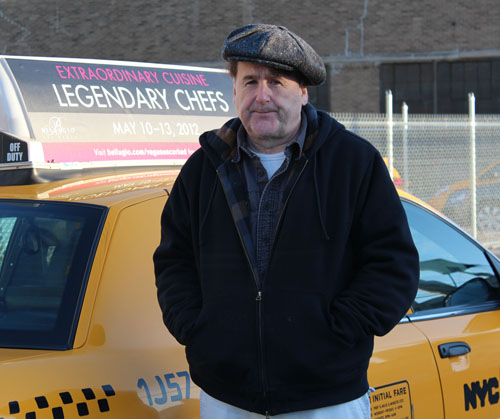 Photo by Nancy A. Ruhling
He’d rather be acting or activating.

“I do a lot of things, but I’ve never mastered anything completely,” John says. “My whole life is like a hobby. I’ve had a lot of time to do things, but I ended up not having a good job or career.”

This fact doesn’t upset John; he has too many friends who have too many regrets. “I’ve done pretty much everything I’ve wanted to in my life,” he says. “I’ll be judged by the way my kids turn out. They’re not aiming for union jobs. My oldest has finished college and has a great job in Chicago. The other two will go to college, too.”

“It’s almost like I’ve taken a vow of poverty,” he says and laughs, adding that the salary of his wife, a Legal Aid lawyer, fills things out.

Yes, he could do more shifts at 55 Stan, but he’s 57, and he’s had to cut back. “I’ve had to pull drunks out of my cab and leave them on the corner,” he says. “I had a guy who tried to punch me, and I’ve even had someone put a gun in front of my face. In that case, I put my head down, put my foot on the gas and got away.” 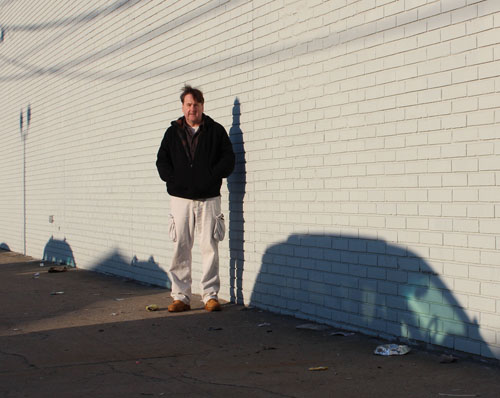 Photo by Nancy A. Ruhling
John’s waiting for the next turn in life.

John’s got a lot of things on his plate besides that bacon sandwich. He pulls a bunch of papers out of a green plastic bag. There’s a British TV show about car gear that may want to feature him and a Brazilian TV show that is asking him to talk about medallions.

Did he tell you about the stand-up routine he’s going to be performing around Manhattan?

Oh, yeah, this one’s really big: There’s talk of featuring him in a cable-TV reality show about cab drivers. That would really put him on the map.

“I might get something,” he says, smiling with a toothy grin as he tosses the papers back in the bag. “You never know.”