It was 2 a.m. It was freezing, so cold that when Luke Gasparre talks about it, he still feels the ice-box chill creeping up his spine even though all this happened to him nearly 70 years ago.

The world was at war with itself for the second time in history, and Luke, an Army infantryman, was guarding a road in Saarbrücken, Germany, in 1944 during the Battle of the Bulge.

Private First Class Gasparre, serial number 32827016, had wrapped a long, brown, wool scarf around his head — his sister knitted it, and God bless him, he still has it — so all you could see were his brown eyes peering out from beneath his helmet. 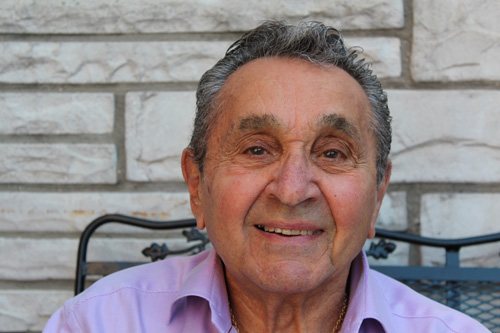 Photo by Nancy A. Ruhling
WWII veteran Luke is a fixture at Citi Field.

“We were always fighting two enemies — the Germans and the weather,” he says. “There were guys who froze to death in the foxholes; I know because I found them when I was on patrol.”

But let’s back up a bit. Luke wants to tell a funny story about how he tap danced his way to his first and only stripe. It was 1943, the first year of his tour of duty. Private Gasparre, who was always fast on his feet, had spent seven years taking tap dance lessons at 50 cents an hour, so the Army asked him to show off his fancy footwork by entertaining the troops.

“The guy who introduced me in the shows got tired of calling me private, and when my commanding officer was in the audience, he asked him to promote me to private first class,” Luke says. “He didn’t have any choice — he had to.” 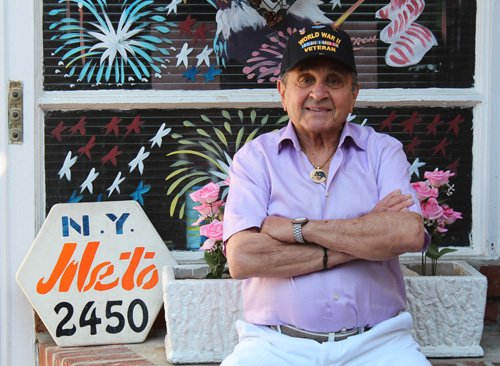 Photo by Nancy A. Ruhling
You can’t miss Luke’s house: The number’s on home base.

Tap dancing is like riding a bike; you never forget it, at least you don’t if you’re Luke. He still has his tap shoes, but he doesn’t even need them. He jumps up and starts cutting the tile with his snow-white loafers, the ones that match his pants.

The dance done, he brings out a photo of himself as a teenager with his siblings; he’s easy to recognize because he’s still the proud owner of a fine head of wavy hair.

OK, let’s get back to the war.

Suddenly, a shot rang out, and the bullet found its way to Luke’s right hand, which was tucked snug as a baby chick in his regulation overcoat. 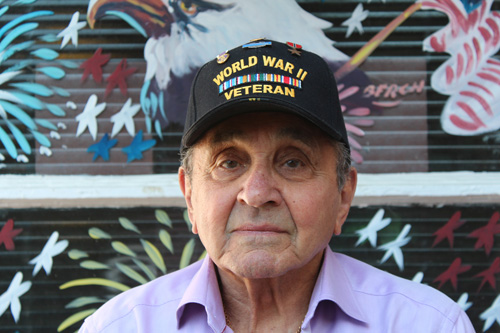 Photo by Nancy A. Ruhling
Luke survived the Battle of the Bulge.

“I jumped in the air, and I fell in the snow, yelling for help,” he says. “The medics came, and I survived — I’ve got the Purple Heart to prove it. I was out two weeks and sent back to combat.”

Luke isn’t used to telling war stories; they are not his claim to fame. Everybody knows him because he’s the oldest usher at Citi Field — in July, he’ll be 88. He’s been on the job ever since April 17, 1964, when the Mets played the first regular-season game at Shea Stadium and lost 4-3 to the Pittsburgh Pirates.

The battle scar — you can’t see it unless Luke points it out — and the memory of that day will linger forever or at least until Luke is laid to rest, which, judging by his exuberance, won’t be any century soon. 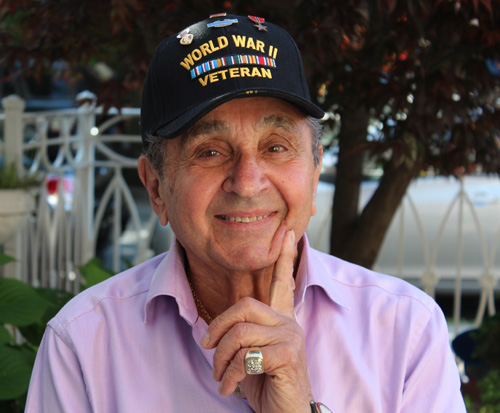 Photo by Nancy A. Ruhling
Luke’s idea of a serious pose.

Luke had another close call that same year during the Battle of the Bulge when he was sent back to the front lines after his hand healed. He managed to outmaneuver German soldiers when he got lost in the thick woods in Saarbrücken.

Luke wasn’t exactly Army material. He got into trouble a lot because he didn’t always follow orders. He dropped out of high school at 17, and he was 18 when he was drafted, so he can be excused for wanting to have a little fun.

He was originally doing duty with the 66th Black Panther Division, but during a state-side training exercise in 1943 that involved gunshots and grenades, he led two other soldiers not to the thick of battle but to a night on the town. 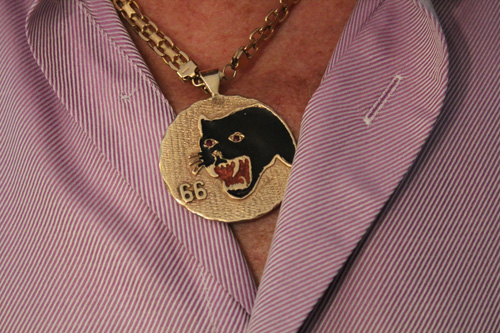 Photo by Nancy A. Ruhling
Luke’s necklace commemorates his time with the 66th Black Panther Division.

“The whole division — it was 21,000 to 22,000 soldiers — was supposed to ship to northern France, but it was held up because the three of us were missing,” Luke says. “When they found us, I was sent to the 87th Division, and in less than a day, I was sent overseas.”

That time he was lost in the Saarbrücken forest? Well, he was left to fend for himself after he refused to do guard duty because his feet were frostbitten.

“I cried like a baby because I thought I’d never see my family again,” he says. “And I really couldn’t walk with my frozen feet, so I pushed myself along on my butt until I got to the road.”

He hid from German soldiers, and when he ran into American troops, he had to prove himself. 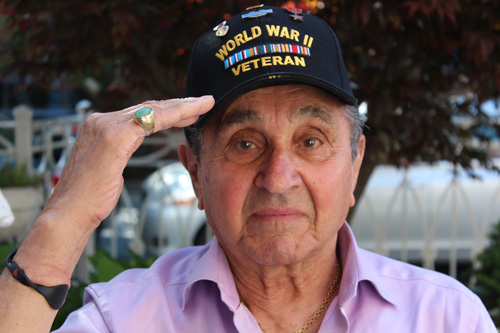 Photo by Nancy A. Ruhling
Luke can still rattle off his serial number as rapidly as a machine gun.

“They asked me a series of questions, including what my favorite baseball team was. I said the Yankees, and that was my ticket out,” he says. “The doctors told me that if I had stayed out two to three more hours, my feet would have had to be amputated above the ankles.”

After nearly 2 ½ years, Luke was discharged, and he moved back to his family home in Astoria, where his parents, immigrants from Bari, Italy, raised their five sons and two daughters.

Astoria was a step up; Luke’s father was an ice man, so they weren’t desperately poor, but they started out in a five-room railroad flat in Manhattan’s Yorkville section. 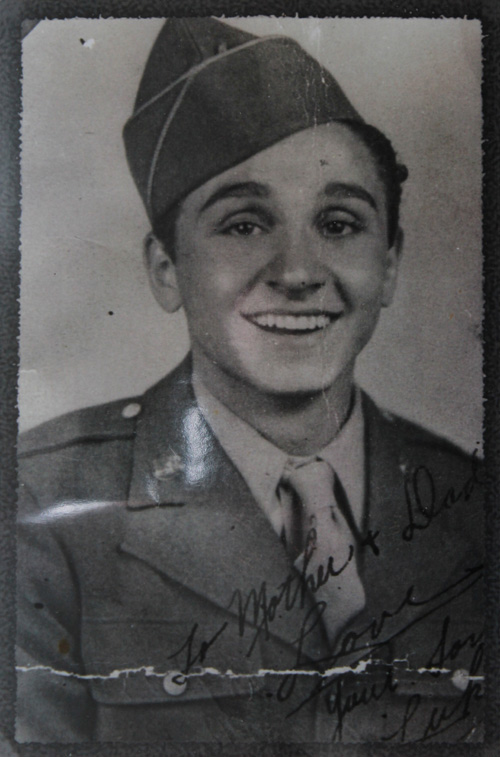 “There was no heat or ice box,” Luke says. “I have four brothers — we slept three in a bed and two in a bed. I was the short one, so I slept with the two big ones.”

Luke’s wife, Madeline, walks in. “You are the wind beneath my wings,” she tells him.

“I am? You were cursing me this morning,” Luke says good-naturedly. 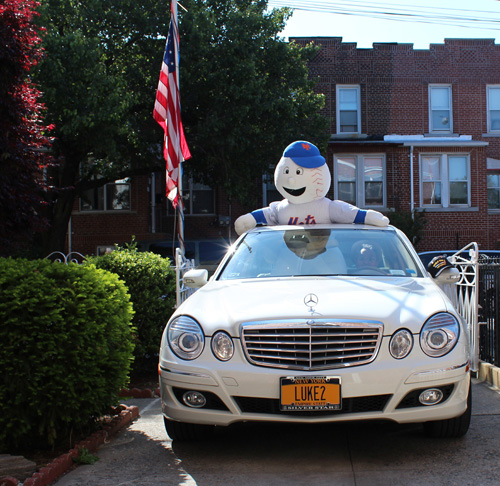 Photo by Nancy A. Ruhling
Luke with his favorite things — his Mercedes and Mr. Met.

“That’s what love’s all about,” she reminds him.

They met on Ditmars Boulevard. He fell in love with her and her legs; she overlooked the fact that he looked like a gangster standing on the corner in his Zoot suit and twirling a long chain.

“I offered to walk her home,” he says. “She wasn’t afraid — she was a seamstress. She opened her pocketbook and showed me the biggest pair of scissors I’ve ever seen.” 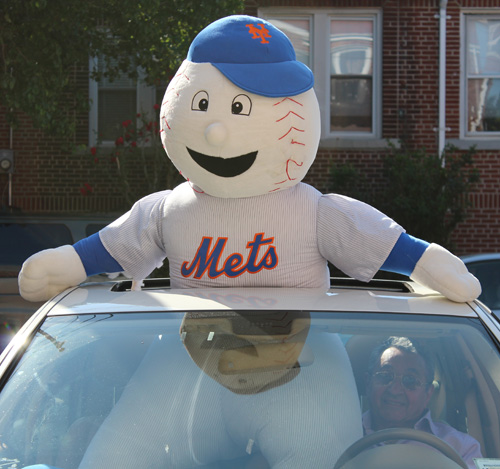 Photo by Nancy A. Ruhling
Luke and Mr. Met ready for the ride to Citi Field.

He’s a good guy, she adds in an aside. They have three kids, and Luke worked day and night to support the family. During the mornings, he was a letter carrier. His route wound around Grand Central Station. In the evenings, he did a variety of jobs. That’s how he came to be an usher at the baseball stadium.

For this year’s opener, he drove to Citi Field in his new white Mercedes, sticking a larger-than-life-size Mr. Met through the sunroof.

Ah, the Mercedes, boy does he love that car. Luke used to ride to work in a blue Lincoln Town Car. The Mercedes, he didn’t tell Madeline about it. He just drove it home and parked it in the garage. 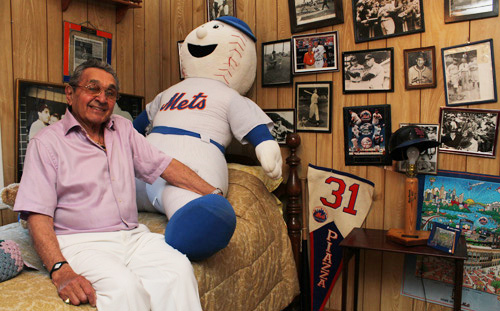 Photo by Nancy A. Ruhling
The Trophy Room reads like a history of the Mets.

“She drives me crazy,” Luke jokes.

Madeline laughs as if she’s hearing his line for the first time.

It’s best to keep smiling, they agree. Luke survived prostate cancer, and Madeline beat breast cancer. They’re going to be 88 soon, so they have to take advantage of everything that comes their way. 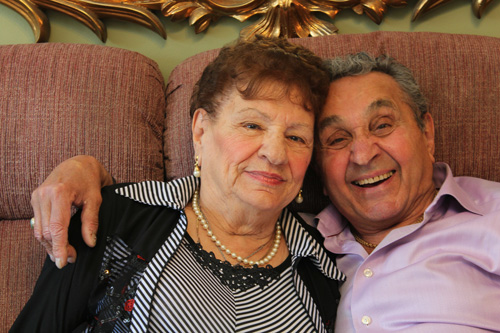 Photo by Nancy A. Ruhling
Madeline and Luke: a love story.

Although Luke started the stadium ushering to earn extra cash, it has become a game that he never wants to end.

“I love being among the people,” he says. “And I want to keep doing it as long as the lord lets me.”

He takes Mr. Met out of the Mercedes and puts him in the spare bedroom, aka The Trophy Room. The Mets memorabilia that surround the mascot say more about Luke than anything else in this world.