The shout-out bounds across the street like a puppy fetching a stick. Erin O’Meara, leash and iPod in hand, waves.

This happens to her all the time. Since she started this job four years ago, she and the dogs on her leashes have walked just about every square and non-square block of Astoria.

“Everyone knows who I am, but nobody knows my name, so they just call me the Dog Walker,” she says. “This is not a career for someone who’s anti-social. People are always stopping me on the street — to talk to the dogs.” 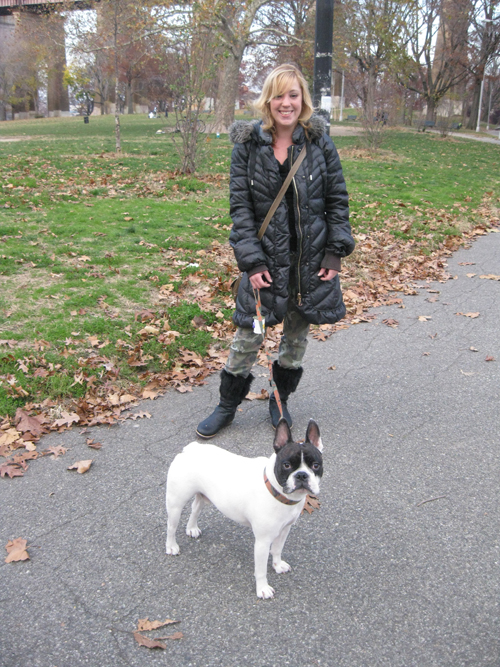 Those who don’t know Erin as the Dog Walker know her as Donut’s Mom. Donut is the cuddly-cute black and white French bulldog she calls her own. Actually, it was Donut who got her her dog-walking papers. When she took him home, she was working in retail, designing handbags and lingerie.

“It was a very cutthroat business,” she says. “It wasn’t for me. I was getting all kinds of publicity — I was even written up in Women’s Wear Daily — but I was still broke and getting knocked off.”

She found she loved walking Donut, so she started offering the leash to other dogs. “My first client was Stanley, a 160-pound bull mastiff who was twice my size,” says Erin, a petite personage with the figure and rah, rah enthusiasm of a Super Bowl cheerleader. “He turned out to be a real mush; I could walk him around on my pinky.”

It wasn’t long before Erin had quite a pack; on any given day, she takes 12 to 17 canines on half-hour constitutionals one or two at a time. “I don’t like to walk a whole bunch at once because I can’t keep my eye on all of them,” she says. “It’s not safe — for them or for me.”

Erin’s no gossip, but she’s willing to dish a little poop. She generally starts by taking Donut to meet Jack, one of his Frenchie friends. “He’s a treat monger,” she confides. “Every day we get in an argument when we go by TD Bank on Ditmars and 31st because he wants to get a bone there; I tried to change the route, but he knows there’s treats across the street at Jolsons, the liquor store, too.” 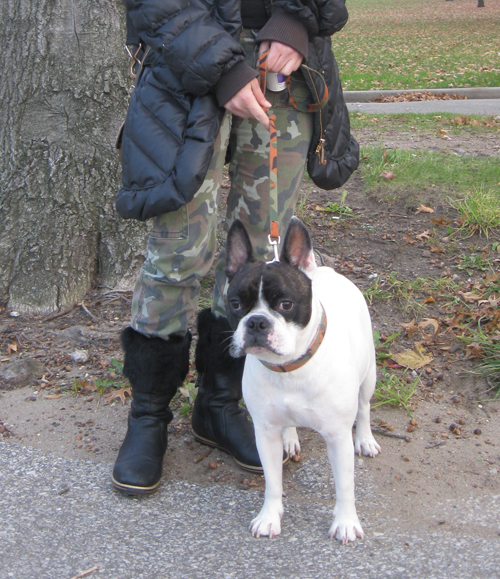 Photo by Nancy A. Ruhling
Erin and Donut spend some quality time together.

After she drops Jack and Donut off, she picks up Beukaboom, a lab/pit bull mix puppy, at Crescent Street and Astoria Boulevard. Beukaboom likes to wrestle with Gus, the Frenchie from 27th Street. The next stop is 50th Street and 30th Avenue, where Mouse, a pug/chihuahua mix, lives. “He’s so friggin’ cute,” Erin says. “But he’s lazy; it takes me 15 minutes to seduce him to walk.”

After Mouse come a maltipoo named Kilo and a Jack Russell/chihuahua mix who answers (sometimes) to Havana. “They’re my little divas,” she says. “Havana is brown, Kilo is white; they look like salt and pepper shakers. And they do a synchronized poop. It’s SO cute!”

At 35th Street and 23rd Avenue, Erin puts the leash on Bruto, a yellow lab who is “the total picture of a sweet puppy.” A stop at Crescent Street and Hoyt Avenue brings her Louise, a little Frenchie with a large underbite. “She looks fierce, but she’s a fraidy cat,” Erin says. “And she’s big into wolfing — rubbing her face in dirty, nasty things.”

Next up are Tessie, a Welsh terrier, and Otis, a beagle/basset hound mix. Their strolls, which begin at 42nd Street and 30th Avenue, turn into scavenger hunts. “They are out for booty,” Erin says. “Otis likes garbage; Tessie looks for chewing gum on the sidewalk.” 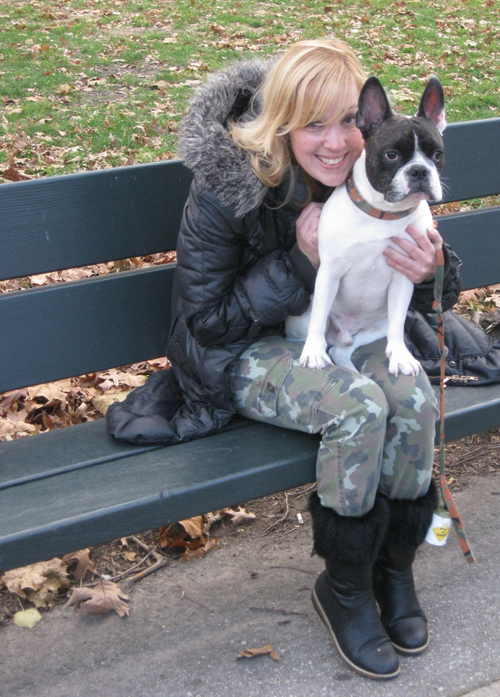 Photo by Nancy A. Ruhling
Erin’s had a million jobs, but dog walking is the one for her — and Donut.

Then there’s Lulu, the yellow lab at 23rd Street and 21st Avenue who smacks other dogs with her paw when she wants to play.

After all this, Erin goes back to Beukaboom. When she drops her off, she’s off with Blinky Palermo, a shih tzu who calls 27th Street and 21st Avenue home. “He’s never in his bed, he’s always somewhere he’s not supposed to be.”

That would be the end of the day, except for Doozer, a chow/German shepherd mix, Erin sometimes walks at 9 p.m. “It’s because of him that I got a garage for my car because I could never find a parking place when I got home,” she says.

That Erin found her calling as a dog walker isn’t such a leap of faith. Growing up in Washington, D.C., she and her family always had dogs. “The first word I said was ‘dog,’ she says. “My little brother’s first word was ‘doggie.’ And our parents were delighted; they didn’t care that the words ‘Mommy’ and ‘Daddy’ came later.” 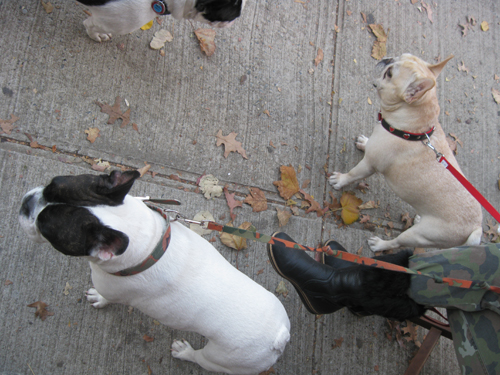 Photo by Nancy A. Ruhling
Erin walks only a couple of dogs at a time.

She’s in Astoria Park with Donut today — she likes to spend a lot of mommy-and-me time with him because she feels guilty that he’s not the only one she squires about on her strolls.

Erin, an artistic, creative soul, has had “a million different jobs” none of them remotely related to dog walking. After she earned a bachelor’s degree in languages and art photography from Georgetown University, she moved to New York City, where she did everything from waitressing to working for a headhunter.

It was after she studied at the Fashion Institute of Technology that she began her design career. Now, she’s also a travel agent/property manager, a job that allows her to mix leashes and leases. “I answer my e-mails and take care of business on my iPod while I’m walking,” she says.

Erin is crazy about her canine crew. “This is a great way to get to know the neighborhood,” she says. “And you can’t beat the company.”

Donut hasn’t been in the park in a long time, Erin says, a tinge of regret in her voice. He charges up to a tree to corner a squirrel then heads toward the East River.

“Dogs are great companions,” she says. “They don’t take everything so seriously. I’ve gone through some really tough times — I got a divorce and knowing that the doggies I walk were waiting for me got me through each day.”

Every walk is a treat for Erin, and every dog gets a treat at walk’s end.

Donut, of course, is her No. 1 fan. And Erin plays the part of indulgent mom to perfection. As she walks toward the subway, Donut makes a detour to the Jumping Bulldog. He’s best buds with Oskar, the Fabulous Frenchie King. 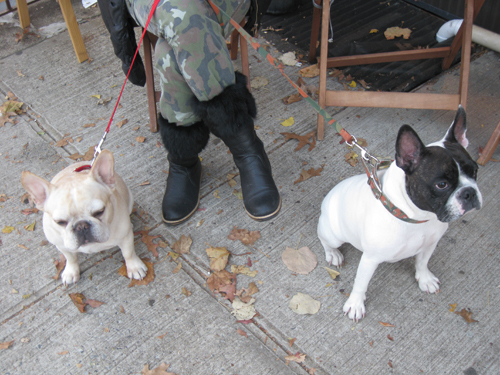 Photo by Nancy A. Ruhling
Oskar and Donut are set to hit the streets with Erin.

While Donut and Oskar do their doggie play, Erin introduces herself to Mr. Humphries, a teacup-size Pekinese-beagle puppy.

Erin’s walking card is full; she swears she’s not taking on any new dogs.

“But he’s so cute,” she says as she strokes Mr. Humphries’ velveteen ears. “And he has such sweet puppy breath.”