“I need some caffeine,” he says, sucking down a liter-size glass of the shop’s signature ice coffee through a straw as though it’s water.

Before he allows himself to sit, he checks the kitchen, rings up a sale at the front counter, confers with a customer about a wedding cake and greets a little girl who’s come in for the tiny-tot red velvet cupcakes he’s designed to delight in one bite. 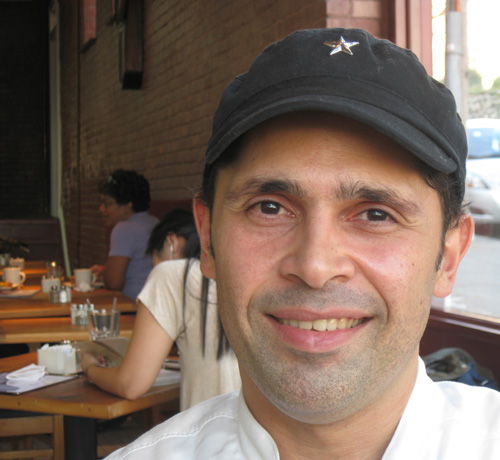 Photo by Nancy A. Ruhling
The sweetest thing at Astor Bake Shop is George’s smile.

George, a compact man with an energetic smile, is willing to work hard; he’s been a pastry chef for more than two decades, and Astor Bake Shop is his dream come true. Unless you’re an avid pot-boiler bake-off watcher, you may not know George’s name, but the famous restaurants he’s worked for — Robert De Niro’s TriBeCa Grill, Nobu, Butter NYC, Café Boulud, Veritas and Blue Fin — cannot have escaped your tongue.

“I have a passion for the precision of pastry,” says George, whose toque is a midnight blue baseball cap emblazoned with the shop’s logo, a shiny silver star. “I like the tradition and repetition of classical French cuisine. It’s not a pinch of this or that, it’s all exacting measurements.”

At Astor Bake Shop, George pours his passion into American- and European-inspired cakes and pastries that range from double-chocolate cupcakes with chocolate ganache to lemon tarts whose swirled meringue tops make them look almost too pretty to eat. But the desserts are only the icing on the cake; the shop serves a simple fare for breakfast, lunch and dinner.

Astor starts the day with stewed or poached farmer’s market fruit, house-made granola, Greek yogurt, applewood smoked bacon and eggs and thick pork sausage then progresses to burgers, salads and sandwiches that are served on George’s homemade breads. Besides the specially roasted coffee that George has all but gulped in one gulp, there’s a collection of signature drinks, including gingerade, brewed ice teas and lightly salted lemonade. 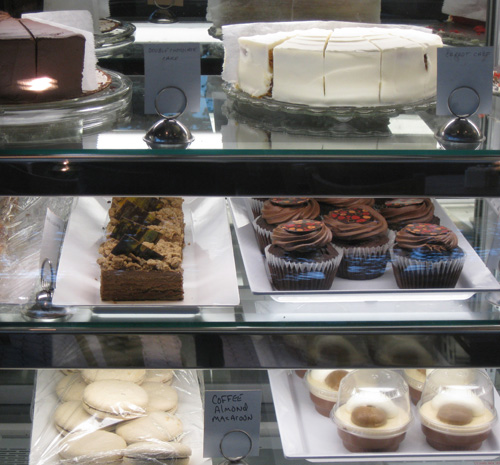 Photo by Nancy A. Ruhling
From red velvet cake to chocolate cupcakes, George’s pastries are to die for.

George’s love of the culinary arts started in his grandparents’ kitchen in Freeport, New York. George, an only child, was raised by his grandparents and his single mother. His mother and grandmother were from Puerto Rico, and the family of his grandfather, a German/American, had a butcher shop in Brooklyn. Everyone liked to cook, even if they all weren’t great chefs like George.

“I spent a lot of time sitting on the counter watching my grandmother cook,” George says. “I was inspired by the aromas, and even at a very young age, I fantasized about flavor combinations.”

The cooking more than made up for the fact that George didn’t have a conventional family. Like Teflon, his two stepfathers — one when he was 5, the other when he was 14 — didn’t stick, and he didn’t even meet his biological father until he was 24. Food, at least when he was a youngster, was love. By the time he was 10, he weighed in at 165.

He also fantasized about ballet dancing, and if things had worked out differently, today George would have been taking stage pas instead of making pastries. He studied classical ballet from age 13, and one week after he graduated from high school, he moved to Brooklyn for more serious study in Manhattan. 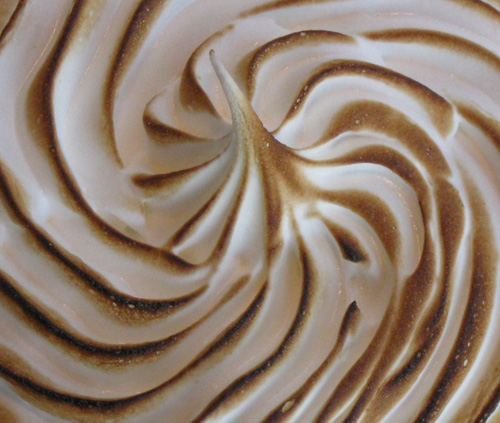 “I didn’t have enough money to pursue it,” he says. “And I knew that it would be challenging because I’m only five-foot-four; it would have been hard to pair me with a female partner who was much shorter than that.”

George fell back on his other lifelong interest, cooking. “I didn’t want a job,” he says. “I wanted something I felt passionate about, something that I could really sink my spirit into.”

But he didn’t have enough money for culinary school, either, so he offered to work for free for a month at Regine’s under Executive Chef Michel Fitoussi.

“It was just before the holiday season, and they had me help with the pastry,” George says. “They discovered I had a knack for it and put me on the payroll.”

Soon, he was working at some of Manhattan’s top restaurants, appearing as a guest chef at the James Beard Foundation, preparing pastries for noted events, including Julia Child’s 80th birthday celebration, and making regular trips to France to attend prestigious invitation-only seminars at Valrhona’s Ecole du Grand Chocolat in Tain L’hermitage and Michel Cluizel’s Chocolaterium in Damville. 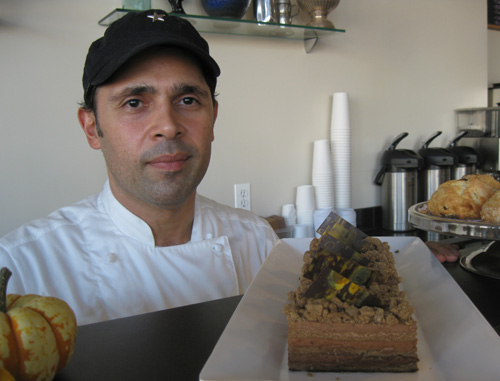 Photo by Nancy A. Ruhling
When he’s not in the kitchen, George works the counter.

All of this was fine and dandy, but George didn’t have a bake shop to call him own. He started scouting locations and settled on the curious, star-shaped intersection of 14th Street, 28th Street and Astoria Boulevard, across from the public library and next to the Hell Gate Social club.

“The owner of Hell Gate Social introduced me to Astoria,” George says. “When I came here, it reminded me of Carroll Gardens in Brooklyn, where I had lived 20 years ago. It had charm, it was not overbuilt, and it felt right.”

George took all of his savings, plus some loans he says he had to “fight tooth and nail” to get, and turned the gutted street level of the building into a light and airy Soho-style shop. 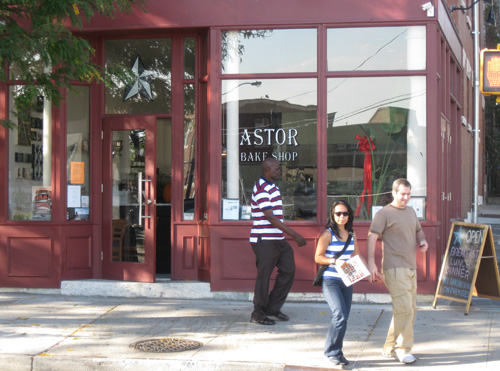 Photo by Nancy A. Ruhling
Astor Bake Shop is an Astoria star.

“It was challenging, but I thrive on challenges,” he says. “We were delayed six months when the buildings department issued a stop-work order for some issues the landlord hadn’t resolved. This was a big blow because I had quit my job at Blue Fin, so I wasn’t making any money.”

Although Astor Bake Shop has a staff of seven, including George’s life partner, Anthony Pappalardo, George still doesn’t get any down time. He’s there turning the key to open the shop each morning around 6, and he’s the guy who turns out the lights at 11.

George hasn’t slept on the premises — yet. There’s a cot in the basement where he’s supposed to rest. “It’s been three weeks since I’ve been able to take a nap,” he says, as he coaxes the last of the coffee out of its bed of ice. “It doesn’t matter, though, because even when I’m lying down, my mind is racing.”

And if he did have free time? “I’d spend more time in the kitchen,” he says, grinning. 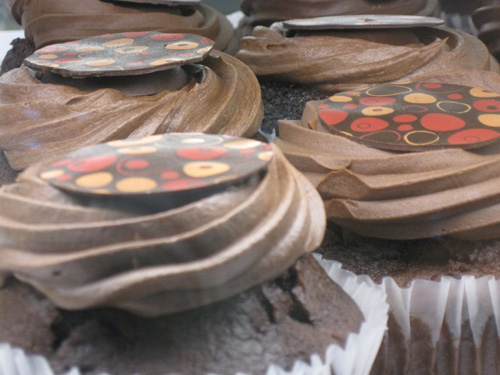 Photo by Nancy A. Ruhling
Cupcakes, great and small, are an Astor Bake Shop specialty.

For George, the Astor is more than the little bake shop on the corner. His grandparents moved to Puerto Rico, his aunt is in Arizona and his mother has Alzheimer’s.

“I don’t have a family, so this creates an extended family for me,” he says. “I want the shop to become a space that people identify with and look forward to coming to.”

Refreshed by the last of his super-sized ice coffee, he heads back to the kitchen.