Stephanos Koullias is running a little late, so when he parks his Bucky Buckaw Work Trike on the sidewalk at the Sunnyside Greenmarket, he jumps off and jogs across the street, high-fiving the autumn sky.

In a flash, he’s back with the collapsible tent, which looks like one of those fold-up thingies you hang wash on to dry, and green garbage pails to set up the booth for the Western Queens Compost Initiative, a group he and his environmentally minded friends founded.

Stephanos, as long and lanky as the string beans being sold at the booth next door, perches on a park bench and waits for people to give him their garbage. Every few minutes, he jumps up to fiddle with the tent’s weights or offer tips and advice to donors. 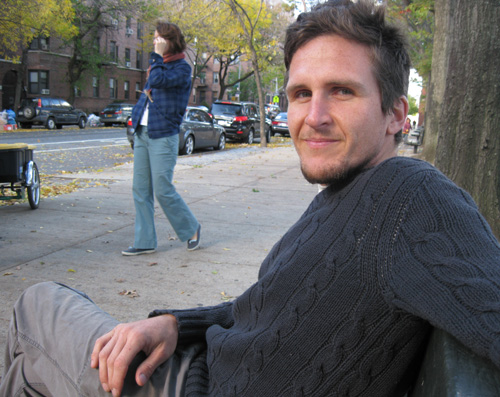 Photo by Nancy A. Ruhling
Stephanos is Astoria’s green-garbage guy.

When the green pails are brimming, the debris of dining is transferred to one of the four containers that hitch a ride on the back of Stephanos’ trike. Later, he will pedal them to the Brooklyn Grange, which is about half a mile from the market.

Stephanos works the Sunnyside market every Saturday; every Wednesday, he mans a booth at the Long Island City Greenmarket, and on Thursday afternoons, he oversees a compost distribution site in Williamsburg.

In a good week, he will collect nearly 1,000 pounds of other people’s excess edibles; today, he expects to harvest nearly 500 pounds, which, he concedes, you have to be really strong to transport in a single trike trip. 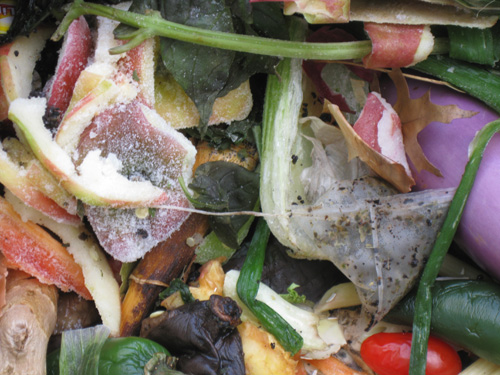 Photo by Nancy A. Ruhling
Garbage, the still life.

“Composting spills out into all areas of my life,” the 30-year-old Stephanos says. “It doesn’t pay me anything yet.”

But that may change: Stephanos, who completed a city department of sanitation course to become a certified master composter, has just applied for a grant that would pay him a salary for being a food-waste-reduction coordinator.

“New York City creates an obscene amount of waste,” he says. “The 1,000 pounds we collect every week is a fraction of that, but you have to start somewhere. But even for me it’s not encouraging to think how little impact this has.”

Stephanos, who was born in Brooklyn, was raised on the pea-sized island of Kalymnos in Greece and on Staten Island. While he was a student at the University of La Verne, where he earned a degree in political science, Stephanos worked as a cook and a bike messenger. When he graduated, he took a job as an educator on a Hudson Valley farm. “When I had down time, I worked in the fields with the apprentices,” he says. 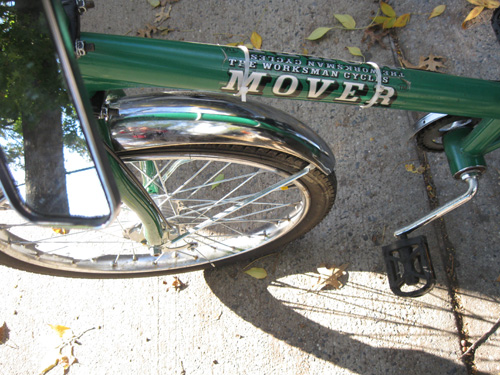 Photo by Nancy A. Ruhling
The trash trike is a mean, green machine.

It was community gardening that drew Stephanos to composting. When he moved to Astoria in 2008, he signed up for a 100-square-foot plot at Two Coves Community Garden.

“It became an all-consuming activity,” he says. “I had had an office job with a nonprofit, but I started spending all my time and money in the garden.”

Stephanos hopes that his work with the Western Queens Compost Initiative inspires others to see the good in garbage. “Composing is very important to me,” he says. “If I had to sum it up in one word, it would be ‘fertility.’ We produce so much in this world that we need to be sterile. Composting brings together my interest and concerns about a lot of issues, including reducing our dependence on fossil fuels.”

As he speaks, a woman pulling a little red wagon that is carrying her baby and her compost makes a 20-pound donation. 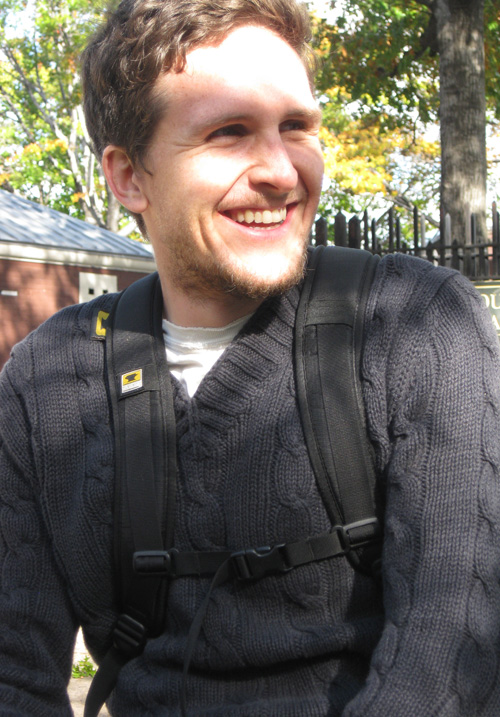 Stephanos gives her a smile. “Sanitation starts with each and every one of us,” he says. “Composing is an education in what sanitation really can be.”

Setting up the Western Queens Compost Initiative was a daunting task; for several months, it kept Stephanos so busy that he was lucky to have enough time to create his own compost to donate.

“I knew what I was getting into,” he says. “For a while, I was only getting three to four hours of sleep.”

Because he has been so consumed with compost, Stephanos hasn’t given much thought to what his next step will be. He is considering getting a master’s degree, but he doesn’t know in which subject. Then again, he might go to work for another nonprofit. 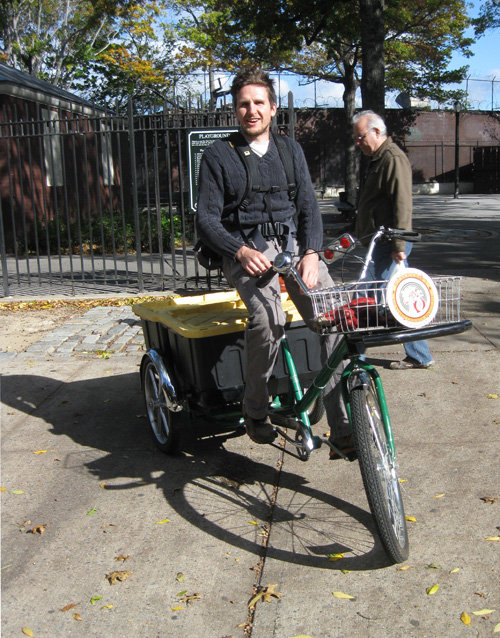 Photo by Nancy A. Ruhling
Stephanos rides tall on the trike.

All this sounds very vague on purpose. To be honest, Stephanos is pinning his hopes on getting that grant that would make his venture financially stable.

In the meantime, he and the Bucky Buckaw Work Trike will keep on truckin’.