Jules Corkery trudges up the marble stairs hauling a white plastic bucket of compost that’s almost as big as she is.

“Welcome to the farm,” she says as she opens the double deadbolt door to her dollhouse of an apartment facing the Astoria Park tennis courts.

She hands the bucket off to Robert McMinn, her significant other, as Esmeralda, Penni and Dearie crowd around her feet.

“Oh! There’s some poop,” she says as she excitedly scoops the shiny black pearls into her hand. “These are like nuggets of gold.” 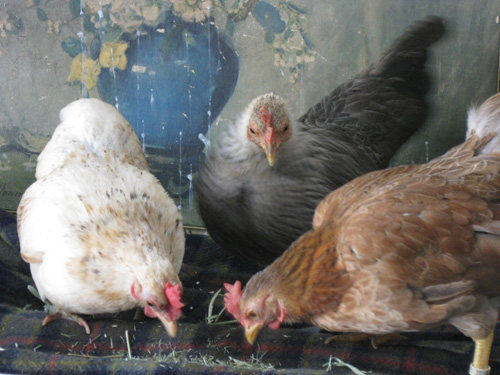 Photo by Nancy A. Ruhling
The Serama chickens: Esmeralda, left, Dearie and Penni.

“They act as natural accelerants for the compost,” Robert explains.

The white Esmeralda, the black and white lace Dearie and the coppery Penni are chickens. Not just any finger lickin’-good chickens, mind you. These pretty petites with the fine-feathered features are show chickens called Serama. The mini-birds — the size of pigeons, they are the lightest chickens in the world — originated in Malaysia about 15 years ago and have only been immigrating to America during the last decade. 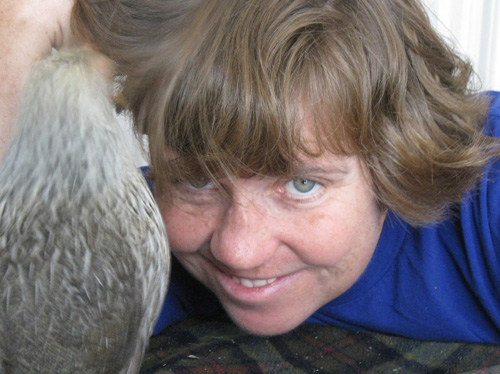 Photo by Nancy A. Ruhling
Dearie plays hairdresser with Jules, flipping her curls.

These aren’t the first Serama Jules and Robert have boarded in their three-room apartment.

“We won the first three at a lottery in Maine, but they turned out to be roosters,” Robert says. “They crowed all day long, so we exchanged them for pullets or young hens. One of them turned out to be a rooster, too, so, after a neighbor complained, we exchanged him for Esmeralda. I’m pretty musical — I play the guitar and ukulele — and I realized the roosters were crowing in fifths from A to D, so I got them to sing with me. We’d do a whole song together.” 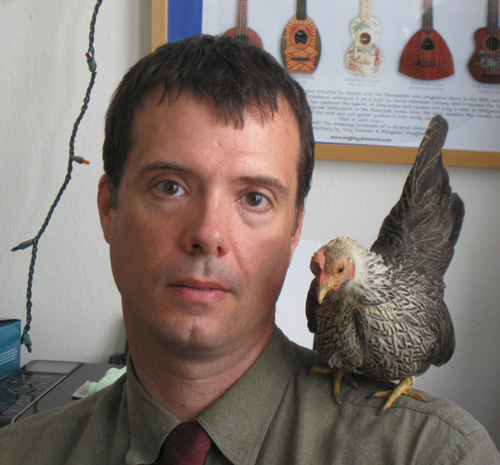 Photo by Nancy A. Ruhling
Robert and Dearie make a great duo.

Deciding to raise chickens in an apartment that’s smaller than a chicken coop isn’t something Jules and Robert are doing on a whim.

“I consider myself a chicken evangelist,” says Robert. “It’s not just about chickens. My goal is to make connections with people in creative ways, and chickens are the opening. When we are doing community gardening or going to the park, we take the chickens with us. They enhance the experience by weeding, eating bugs, fertilizing a little and tilling a bit. It’s a thrill for people to see chickens in unexpected places, and it starts a lot of good conversations about food, agriculture, public health, animal welfare and other topics.”

Robert has had chickens before. A native New Yorker — he grew up in Brooklyn and the Hudson Valley — Robert took a detour to Boise, Idaho, where he tried the urban farm thing out. 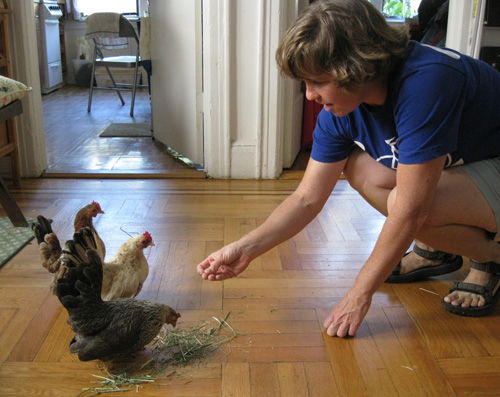 “I went there to see what would happen,” he says. “I started raising chickens in my back yard, and I created a radio show character called Bucky Buckaw; I still broadcast the show on 12 stations. I ended up staying for six years and running for the state Senate. I got 30 percent of the vote.”

Robert’s chickens were more than mere egg layers. Under the stage name Roberto Buscarsi, he was picking up acting jobs, and some of his chickens had roles in the films. He even trained one of them to sit on his shoulder when he rode his bicycle. 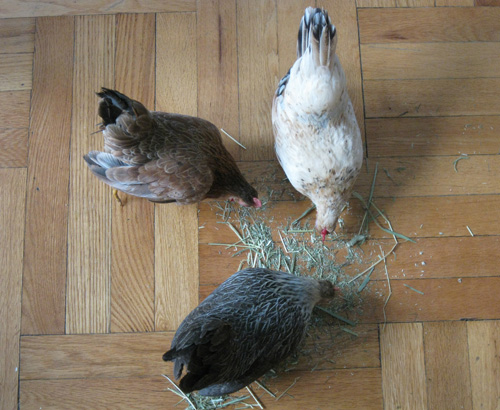 Photo by Nancy A. Ruhling
It’s dinner time: The chickens peck at the parquet.

Robert, a tall pencil who views the world with the wide-eyed innocence of Mr. Rogers, moved back to New York in 2007, sans chickens. In 2008, he and Jules, a bird watcher and like him an avid environmentalist, met at a street fair that Robert had set up to coordinate with a performance by an environmental theater group. Jules was manning the booth about red-tailed hawks.

“On our first date, we went to Luyster Creek — a stinky, stagnant water source — to look for nesting birds,” says Jules, a pixie with bobbed honey-blond hair and Doris Day’s wholesome good looks. 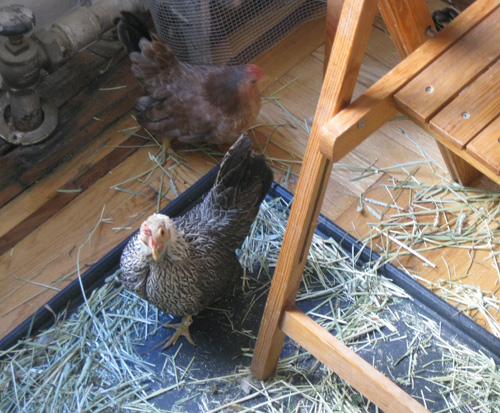 Photo by Nancy A. Ruhling
Dearie takes a walk in the western Timothy grass in the living room.

Adds Robert, “I didn’t have any interest in bird watching, but I know birds from chickens and I liked Jules, so it worked out. We’re not married, but everyone thinks we are. We just live together and have chickens.”

They had other things in common: They are cyclists, and they chose their apartment because they can see the nest of the red-tailed hawks in Astoria Park from their front window.

Jules, who helped start the Astoria Park Alliance and has been planting a butterfly garden there, grew up in Maine and followed a boyfriend to New York a dozen years ago. 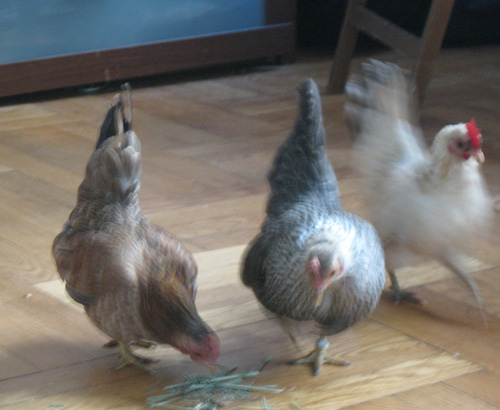 Photo by Nancy A. Ruhling
The chickens turn meal time into a family event.

“We didn’t last, but New York stuck,” she says, as the chickens follow her around like mother hens. “I had always liked biking, hiking and camping, and I’ve come to appreciate green space much more so now that it has become such a tough commodity to find.”

She grabs a handful of western Timothy grass from a plastic bag the size of a king-size bed pillow and spreads it on the parquet floor, breaking it apart until it is beak-size. The chickens flock to it; they also eat finely chopped cilantro, kale, watermelon rind and whatever rice is left over in the steamer. They lay enough silver-dollar-sized eggs to make two omelets for Jules and Robert every week.

“They need more care than a fish but less than a cat,” Robert says as he picks up some more of the precious poop. 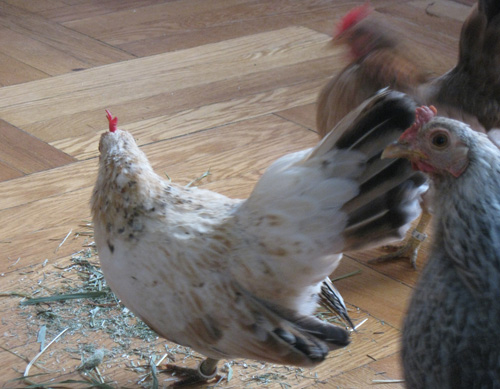 Photo by Nancy A. Ruhling
Esmeralda, Dearie and Penni are good sports; feathers seldom get ruffled.

When Jules and Robert are at work — he’s a public policy associate for the Jewish Board of Family and Children’s Services; she’s an executive assistant for Catholic Charities’ Beacon of Hope House — the chickens have the run of their second-floor roost.

They are free to roam the rooms, preferring the kitchen and living area; at night they are put in a wire cage that sets on top of a desk. When Jules and Robert take them to community events, they put them in a dog-carrying case they found in the street.

Sometimes Robert serenades them with his ukulele, which begs the question: Which came first, the chickens or the uke? Answer: the uke.

“I’m a self-taught musician, and the uke’s a hobby,” Robert says. “I play on the street on my lunch hour and on the subway and when we take the chickens to events.” 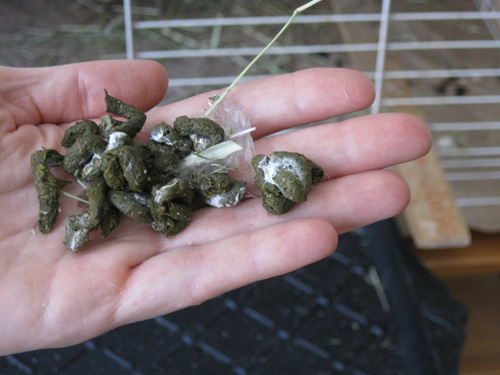 Photo by Nancy A. Ruhling
The pearls of poop are for composting.

Robert dreams of getting a place with a yard. He doesn’t want more chickens — three are more than enough company.

“The chickens are happy here, but they are happier when they are outside,” he says. “Maybe I could buy a mansion and turn the grounds in a demonstration of urban farming.”

Esmeralda, Penni and Dearie, fresh from a fine-grained bath in their sandbox, go back to pecking at the parquet. It sounds like raindrops falling softly on a roof.