It’s Saturday, one of Shawna Morlock’s days off, so the answer is chocolate-chip pancakes. 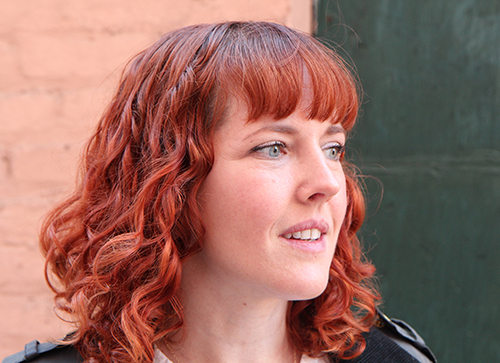 The question comes from her 4-year-old daughter, Cara, her who is wearing a purple paper crown to hold down her long, little-girl blond hair.

“I don’t like to be late for breakfast,” Cara says.

Shawna’s husband, Roger, is at work, so she and Cara make them together.

When Shawna sets Cara’s plate on the living room coffee table, her daughter runs over to gobble up the goodies. 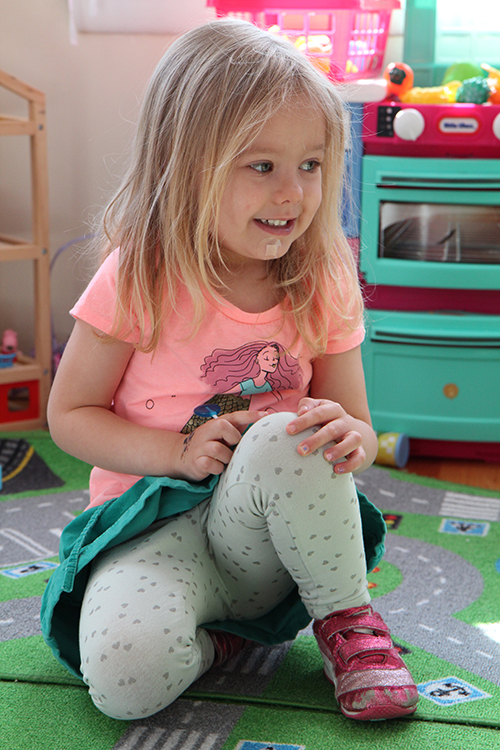 Cara wears a Band-Aid on her chin like a badge.

Once they’re gone, she sits in her playroom, talking to and with her toys, which include a rocking horse with butterfly wings hanging on its back and a brown teddy bear that is four times her size.

Shawna, sipping coffee from a ceramic mug, savors their daughter-mommy together time because there’s not enough of it: She has a full-time job as a cosmetologist at ARROJO Studio in SoHo.

Cara, whose artwork adorns the walls of the apartment, has just finished a drawing and runs up to show it to her mother. 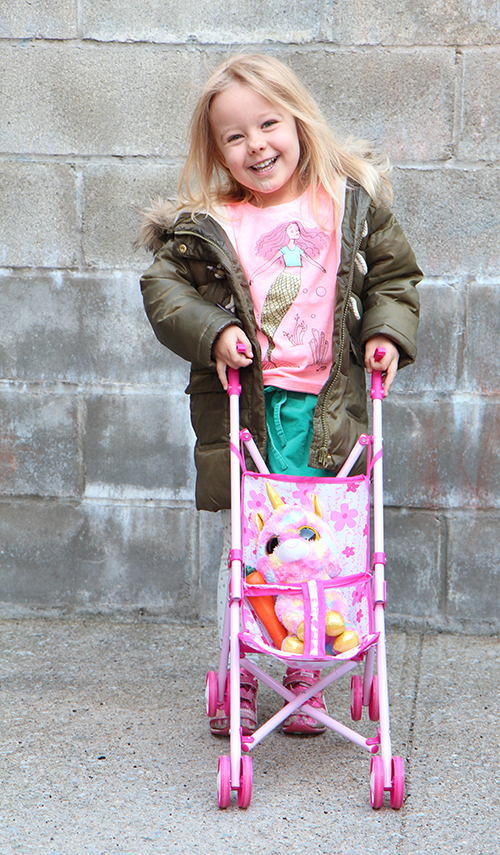 Cara taking her ‘baby’ for a spin.

“At the moment, black is her favorite color,” Shawna says as she admires Cara’s colorful picture.  “You can tell she’s a real New Yorker.”

Although Shawna’s from the South – she was born in Waco, Texas, and lived in the state’s tiny town of McGregor until she was 12 and her parents divorced and she and her mother moved to Jacksonville, Florida – she always believed she belonged in Manhattan.

“I saw a TV commercial for Dial soap when I was 5,” she says. “Everyone piled into a cab in New York City. I wanted to be in that big, bright light-filled city.”

It would take her 21 more years to get there. Her stepfather’s job with water treatment plants kept them moving up and down Florida’s east coast (and even took them to the upper peninsula of Wisconsin for a year). 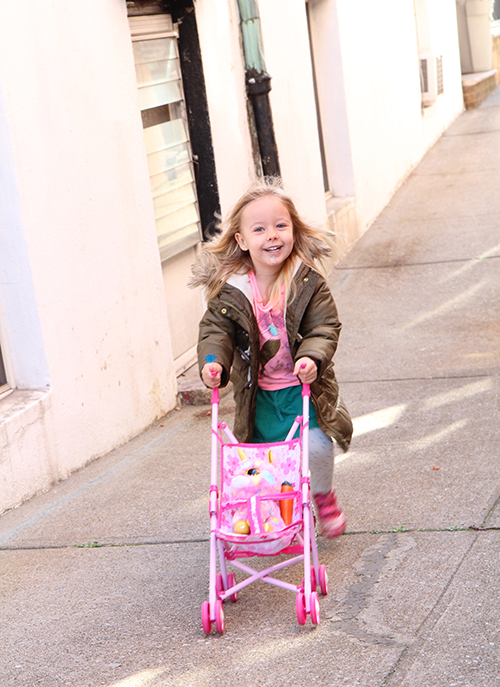 Nobody can catch Cara!

“I became emancipated at 16,” Shawna says. “My parents were moving again, and I had already been in four high schools so I didn’t want to leave. I also was working 30 hours at a shoe store.”

Shawna got an apartment and a roommate long enough to finish school.

“I did well in high school, but I hated school,” she says. “I love to learn, but I hate to learn in a classroom.” 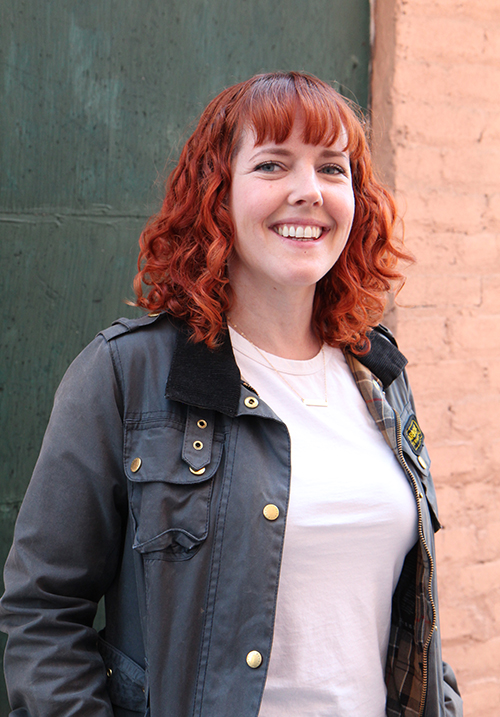 Shawna’s first career, in the hospitality industry, was bartending.

After graduation, she got a job in a restaurant waiting on tables.

“I cried every morning when the alarm went off at 4:30,” she says. “I transferred to bartending to make more money. I worked in nightclubs then high-end restaurants, and I fell in love with the hospitality industry.”

Shawna realized early on that bartending was not a viable long-term career. 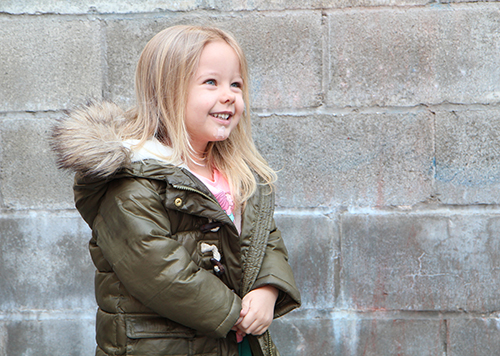 “You see older men doing it but never older women,” she says. “And I didn’t think that would change in my lifetime.”

She saw hairdressing, though, as an exciting option.

“My first roommate did it,” she says. “And she came home super excited every day. I wanted to have a job where I made people happy every day.” 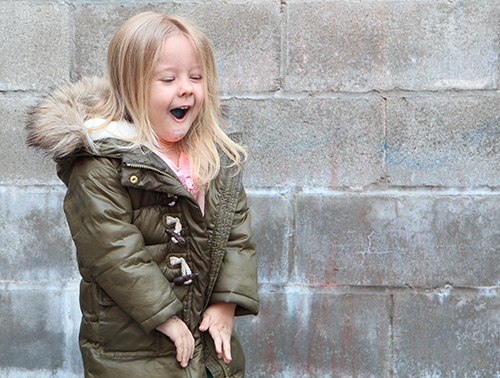 She started saving her money and setting her sights on Manhattan.

It was Roger who delayed her arrival.

“I met him in Florida,” she says. “He was an assistant manager at the restaurant where I was bartending. He’s from Germany, but he had had an internship on Long Island and wanted to come back to New York. We got married five months after we started dating.” 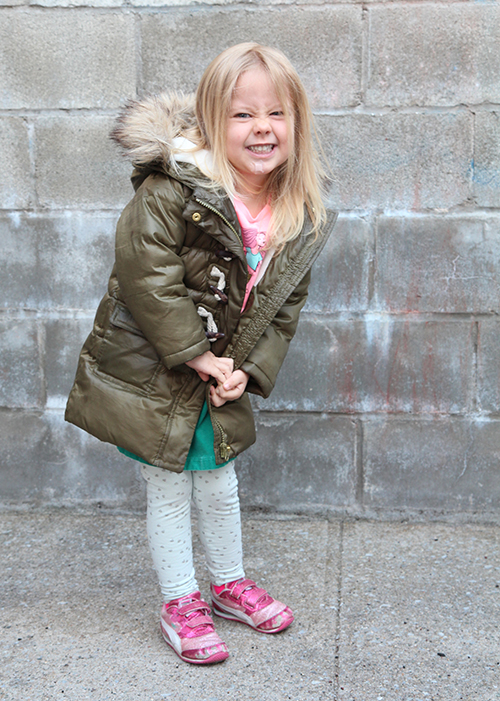 “We didn’t have jobs lined up,” she says. “But we had contacts in the industry and got hired right away.”

By 2010, Shawna had enrolled in ARROJO Studio’s cosmetology school and was hired as a colorist upon graduation. 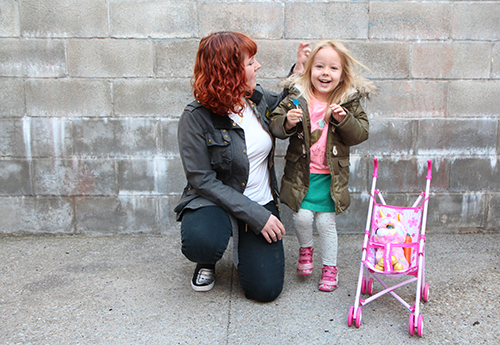 Cara and Shawna: happy together.

Her aspirations were cut short, however, when Roger was offered a job in 2014 opening a restaurant in South Beach, Florida.

“I started sobbing,” she says. “The original plan was for us to stay there seven to ten years and have Roger open a group of restaurants, but only one opened, so we came back after two years.”

When they returned, Roger became the general manager of Smith & Wollensky, and Shawna returned to ARROJO Studio. In addition to her colorist work, Shawna teaches the studio’s apprentices and the continuing-education classes. 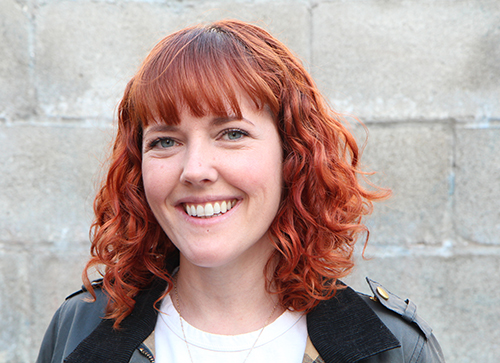 Shawna likens coloring hair to putting together a puzzle.

“I see nine to 10 clients a day,” she says. “I work because I like to work not because I have to. Roger works at least 60 hours a week; we could squeak by on his salary.”

Sometimes,  Shawna considers the idea of opening her own salon. If she did, it would have to be small and manageable.

But honestly, she’s content right where she is. Retirement is decades away, and she wouldn’t be surprised if she never leaves ARROJO Studio. 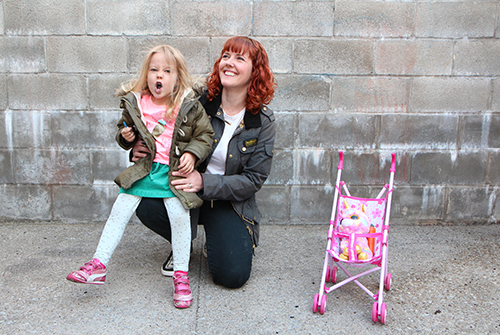 The Cara and Shawna Show.

“I’m not driven to make a million dollars,” Shawna says. “I’m happy to be comfortable.”

Cara, who is sucking on an après-pancake Wonder Woman lollipop that turns her tongue neon blue, is eager to play on this beautiful day.

In a little while, Shawna is going to take her to Astoria Park.