Dr. Tom Moulton arrives cradling an orchid in one hand and a loaf of home-made soda bread in the other. My white phalaenopsis is wilting, so he rushed right over.

“Oh, it didn’t make it! But don’t worry, the white ones are common,” he says soothingly as he presents me with the yellow orchid he brought as a replacement. “You can easily find another one.”

Tom is a pediatric hematologist/oncologist at Bronx-Lebanon Hospital Center who takes care of kids who have sickle cell anemia. He doesn’t wear a scary white lab coat or an off-putting tie. He treats his patients like family, and they keep him close to their hearts. 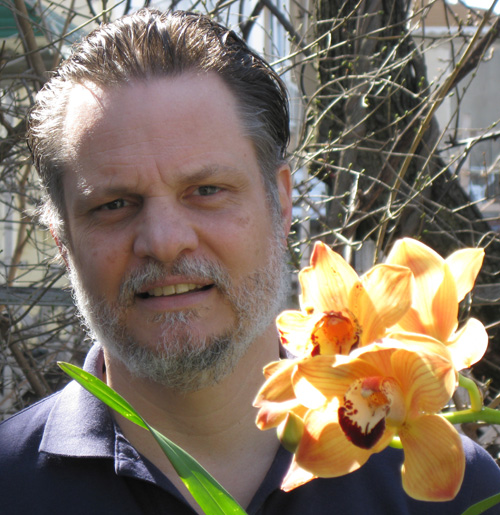 Photo by Nancy A. Ruhling
Dr. Tom, as he is called, makes house calls for plants and people.

Through clinical work, research and teaching, he’s devoted his life to the health care needs of children, especially those in poorer communities, and dreams of a sickle cell cure. You’ll see him Saturday in the Sickle Cell Thalassemia Patients Network‘s annual fund-raising walkathon in Central Park.

Tom’s a most modest fellow; he has enough plaques and awards to fill a hospital ward. But mention them, and he gets as bashful as a teen on his first date.

And his sinfully sweet peanut brittle, oh, good grief, he can’t take credit for that either. That’s his grandmother’s recipe.

But the facts are the facts. At the hospital, Tom is the doctor who brings in the bagels to the nurses and secretaries. At church, he’s the lector and eucharistic minister who bakes the communion bread, sets up the socials and drives souls to and from services. At home, well, there’s nary a neighbor who hasn’t called upon him for a house call. 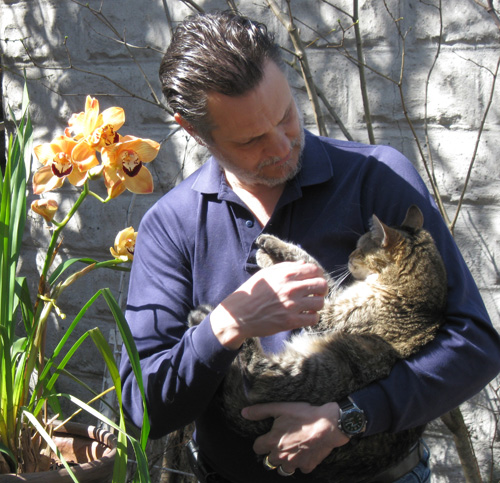 Photo by Nancy A. Ruhling
Tom with Bashful, one of the cats who call him Dad.

He once spent hours on the phone trying to persuade immigration authorities to allow his patient’s sister to come to New York from the Dominican Republic to see whether she was a match for a stem cell transplant. Despite the immigration roadblocks, the sister was eventually allowed into the United States, and the family was reunited.

Then there are the cats. Well, it’s as though Tom’s their Pied Piper. All he has to do is walk down the street, and the strays can’t stay away.

“I have always found physical biology fascinating,” he says. “I knew I either wanted to work in pediatrics or geriatrics. I found that I much prefer working with children because they bounce back so much easier than adults.”

The seventh of eight children, Tom grew up in Brimfield, Ill., an insignificant dot on the map near Peoria. His parents weren’t in the medical profession, but his grandfather was a pharmacist who was the inspiration for Mr. Morgan, the druggist in Thornton Wilder’s Our Town. 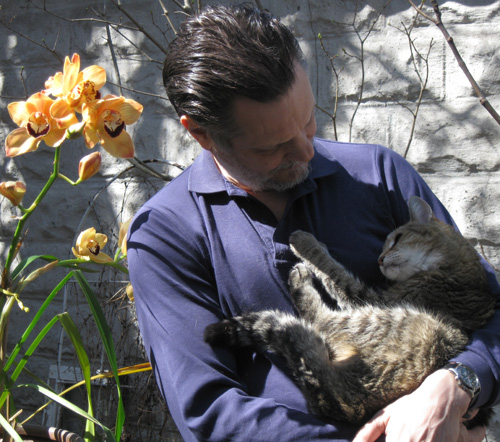 Photo by Nancy A. Ruhling
Tom has a great bedside manner, even with cats.

“Mr. Wilder sent him a copy of the book in the 1940s with a personal note that said something to the effect of ‘Mr. Morgan may sound somewhat familiar,'” Tom says.

It was in Brimfield that Tom learned to bake and garden. “We had 10 acres, and we had a vegetable garden,” he says. “I planted cantaloupe — nobody else could get them to grow. My mother had orchids, but she didn’t have time to take care of them. I can’t stand to see anything wilting or dying, so I took care of them. And my sister and I baked and made candy when we were kids.” 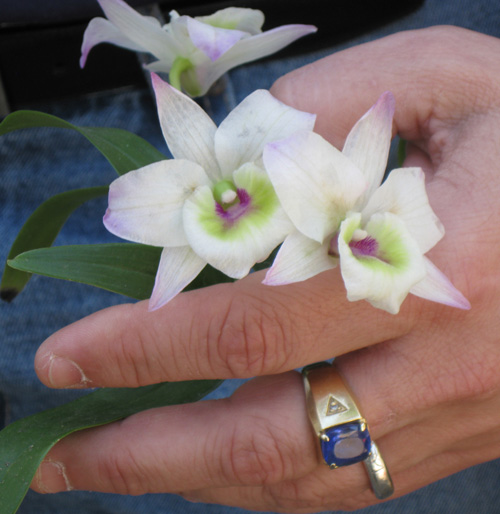 Photo by Nancy A. Ruhling
Tom is an orchid whisperer, too.

From there, he eventually got a job at Montefiore Medical Center in the Bronx, where he worked until last year when he transferred to Bronx-Lebanon Hospital Center.

Tom, by his own admission, is shy. Of course, when he married filmmaker and gay-rights activist Brendan Fay, all hope of staying on the sidelines vanished.

He and Brendan met at a mass held by Dignity/USA, a gay Catholic group, at St. John’s in the Village Episcopal Church. 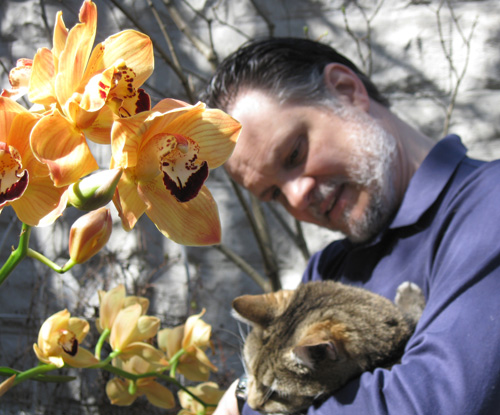 Photo by Nancy A. Ruhling
It’s so like Tom to stay in the background and put Bashful in the spotlight.

“I had broken up with a longtime boyfriend, and I started going to church to meet people,” Tom says. “I don’t smoke or drink, and I was a wallflower. I used to sit in the back, and I never went to the social events.”

One Sunday when Brendan was running late, he found himself sitting in the back pew next to Tom. He introduced himself and before Tom knew what was happening, Brendan asked him to help arrange an event for the Lavender Green Alliance, an Irish gay group.

“He called me the next night, and I thought, ‘He must be desperate to get help for the event.’ As it turned out, that was our first date.”

It was Brendan who gave Tom his public role. “We’re constantly in the newspapers,” Tom says. “The publicity doesn’t bother me. Most of it is on Brendan. I’m just tagging along, but I’m very happy to support him. And if it hadn’t been for him, I never would have gotten to Ireland or Poland.” 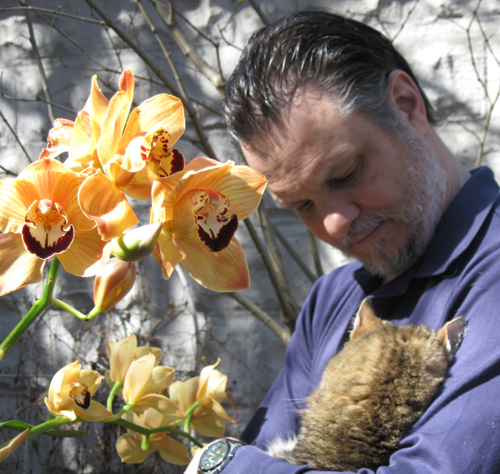 Photo by Nancy A. Ruhling
Tom lulls Bashful to sleep.

Their wedding made international headlines, and to mark their fifth anniversary, Tom asked everyone to send donations to a foundation for Polish children who had cancer. He recently returned from Poland, where he visited the foundation leaders and spoke at the pediatric oncology department at the children’s hospital in Krakow.

But all in all, he’d be just as happy to be puttering around the garden, where he’s planted a fig tree, a lilac bush and six big blueberry bushes. Or tending to the orchids. Or playing with the cats.

Speaking of orchids, Tom tells me that I must replant the biggest one when its blooming cycle ends. He gives me instructions, but he knows as well as I that when the time comes, I’ll call him again. And he’ll come, gladly, bearing gifts.