Leave your shoes at the door, feed your cash to the kitty and come on in for dinner.

Tamara Reynolds, the barefoot chef with the flamboyant carrot color hair and cherry-red toenails, is still whipping up stuff in the kitchen. The skillet is searing something, and the Cuisinart is crunching and crushing against time.

So just help yourself to some wine; the glasses — mason jars — are on the serving cart. Tamara’s not big on formality. You don’t have to meet her to know that. The co-author of Forking Fantastic! Put the Party Back in Dinner Party calls her club Sunday Night Dinner, but this time, she’s holding it on a Friday night. Someone turned up with an extra guest at the last minute. It didn’t throw her; she took the more and made it merrier. 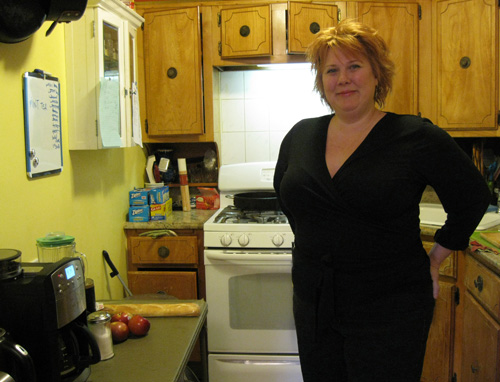 Photo by Nancy A. Ruhling
Tamara gave up opera for kitchen theatrics.

“Cooking is like stand-up comedy,” she declares as she sidles up to her snow-white GE range. “You have to mix things up and improvise.”

More guests — some from Manhattan, Brooklyn and even New Jersey — are arriving as Tamara presents the appetizer — anchoiade with fennel, celery and radishes. (Translation for non-foodies: anchovy dip and veggies.)

In case you’ve forgotten what’s on the menu, it’s written on the back of a brown paper bag and thumb tacked on the door.

Bulgur and greens with pistachios and yogurt

Celeriac with egg and lemon sauce

She starts serving about 7:30, and heck, we’ll all family even though we’ve never met before, so just sit wherever you want. The two tables that have taken over Tamara’s living room will serve 25. They are set with mix-and-match china and a combination of fold-up and dining chairs. Everybody digs in when the big bowls are passed around.

Although Tamara does her dinners two to three times a month, there was a time, in her youth, when she never cooked. Back then, she was more at home on the stage than at the range. “I was training to be an opera singer,” she says, “and in between auditions, I was waitressing to make money.”

She left her native Phoenix to work on a master’s degree in opera at the University of Maryland, College Park, but she didn’t have to sing for her supper. Her first husband volunteered for kitchen duty, and Tamara did the dishes.

“I was a Navy wife, I didn’t know anybody on the base, so when I got sick of doing the dishes, I taught myself to cook because I got bored,” she says. “I picked up Gourmet magazine and thought, ‘How hard can it be? I can read.’ I used to practice on my husband’s friends. I had many successes, and many, many failures.” 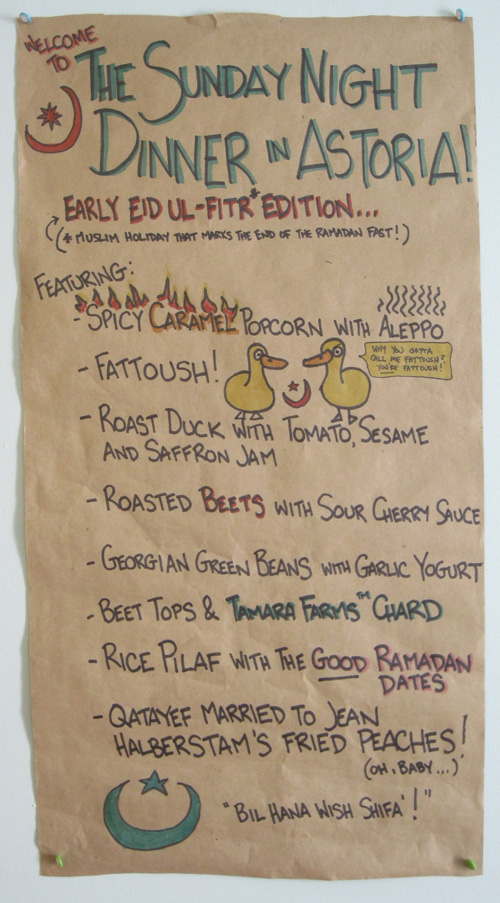 By the time her marriage ended, Tamara had moved to New York City, where she kept up the waitressing-auditioning routine. “The more I learned, the more interested I became in cooking,” she says. “I began cooking with Zora O’Neill, my co-author, every Sunday, and we invited people over. Everybody came because I was the only one who had cable.”

Soon, they had so many guests that they started asking for donations, and six years ago, Sunday Night Dinner was cooked up. “I was spending $1,000 a month on food feeding all these people,” Tamara says. “The donations freed people to invite others, and suddenly I had 100 people on my e-mail list. Now, I have over 500!”

In short order, cooking, not singing, became her passion, and she decided she wanted to host a cooking show. When that didn’t pan out, she set about writing the comic cookbook Forking Fantastic! with Zora. Later, she started a small catering business on her own. “I had this foolish idea that if I wrote a book, they’d have to give me a TV show — right,” she says.

Tamara and Zora spent a year trying out recipes that range from the super simple (roasting a chicken) to the simply scary (roasting a whole lamb and a whole pig on a spit on the balcony of her apartment).

“We had no idea how to do the pig and lamb,” she says. “People could see and smell the smoke from the N train on 30th Avenue. I was a little nervous, so I had made cookies and wore a low-cut blouse in case we had a problem with the fire department, but this is Astoria. People do this kind of thing all the time; nobody reported us.”

The dinner club, Tamara says, isn’t just about a gal making home-cooked meals in the cubicle she calls a kitchen. “It gives people the feeling of family,” she says. “It should feel like you’re sitting down to Sunday dinner with your family but without your sleazy Uncle Fester.” 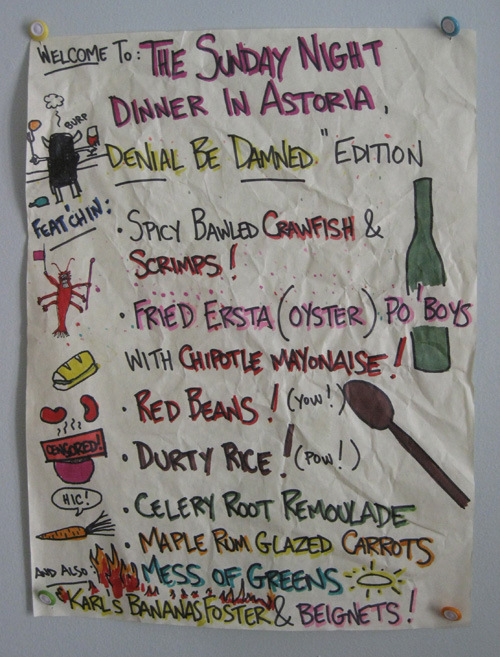 At this Friday Night Sunday Dinner, the strangers have become friends by the first course, and by the time Tamara serves the olive oil cake, they are as friendly as family.

“For me, cooking is a creative outlet,” she says. “I love the challenge, the thrill of the possibility of failure. I love the idea that when I get up in the morning I have no idea how to make a dish and by the end of the evening, I’ve learned how to do it and I’ve met the most fascinating people in the world.”