OK, you guys, where’s all the music? You’re in a rock band, but there’s no radio, no record player, no iPod, no computer pounding out mood music. There’s an acoustic guitar in the corner that looks as though it hasn’t licked a lyric since Dylan, and there’s a vintage Talking Heads record album cover tacked up on the wall like an old master. So what’s this sounds of silence thing all about anyway?

Right now, it’s about conversation. Jamie Stellini and Angela Bowers, best friends and band mates, are sitting on the couch chattering like school kids. The Jamies, the band of four chicks that was formed by Jamie late last year, has been getting a lot of attention, and they’re psyched. 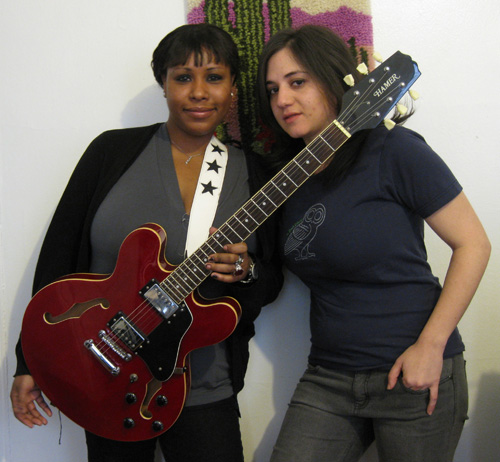 Photo by Nancy A. Ruhling
Angela, left, and Jamie have banded together to make music.

It all started in July when Jamie decided to start what can best be described as the song of the week club. Mortally wounded by a love gone wrong, Jamie decided to wear her heart on her rhythm guitar and chronicle her feelings with chord and chorus for a year and post everything on the Internet.

“Once I started, I couldn’t stop,” she says, adding that she was in another band at the time. “For me, music is a craft, not some magic wizardry, and this got my creative juices flowing.”

She enlisted Angela, a one-time roommate who had a music background, to do lead guitar and backup vocals. “It had been 10 years since I played a guitar,” Angela says. “I did one recording with Jamie, and it snowballed.”

Since then, the two, along with Saysha Heinzman (bass) and Shannon Sigley (drums) have been doing gigs, most of them at the Shillelagh Tavern, a couple of times a week.

“We like to call Sparrow Bar our hive — it’s where we do out hanging out and drinking,” Jamie says. “We’ve met a lot of our friends and boyfriends there.”

When they’re not gigging, Jamie does a techie job at a big bank, and Angela books comics and celebrities for VH1.

Angela and Jamie met five years ago when Jamie advertised on Craigslist not for a band mate but for a roommate. They clicked immediately, but they didn’t start making music together until recently.

Although Angela, who grew up in New Jersey, had studied classical piano and guitar, she never considered a career in music. She was working on a history degree at the University of Maryland, but she realized that the present was much more relevant than the past, so she never finished. She held a couple of jobs in ad sales before going to VH1.

Jamie developed an affinity for music during her childhood in Valley Stream, Long Island. But she studied English literature, not music, at New York University. “I hated every minute of it,” she says. “I was on a full scholarship, but I dropped out in my senior year.”

She took a job in a bank. “I was playing and writing the whole time, but I never got anything off the ground until I decided to write and record a song a week,” she says.

Once Jamie’s song-of-the-week gig ends in July, the band will start working on an album. “The best records are stuffed with hits,” Jamie says. “The Beatles went in to their first recording session with 100 songs and picked the best, which is what we’ll do.”

Although the first songs were in the he-done-me-wrong vein, Jamie is in a serious relationship, so, as the still single and still searching Angela says, “everything’s about happiness and birds singing. It’s not always easy to listen to.”

Up until now, Jamie has been doing all the writing and recording; the band hasn’t had the time to play many of her songs live. “They will sound different live,” Angela says. “I can’t wait to play them and hear them.”

Angela and Jamie love their day jobs. So would they be willing to make the ultimate sacrifice and give them up for the band?