As long as anyone can remember, there’s been a deli at the southwest corner of Ditmars Boulevard and Crescent Street. Owners and names have come and gone, but in the last decade, there’s been one constant at the convenience store that sells everything from condoms and kitty litter to snacks and smokes.

It’s Amaro Azeredo, the flamboyant fellow with the amorous accent and the long, raven-black Medusa locks who commands the counter of the Ditmars Deli like a Fortune 500 CEO. 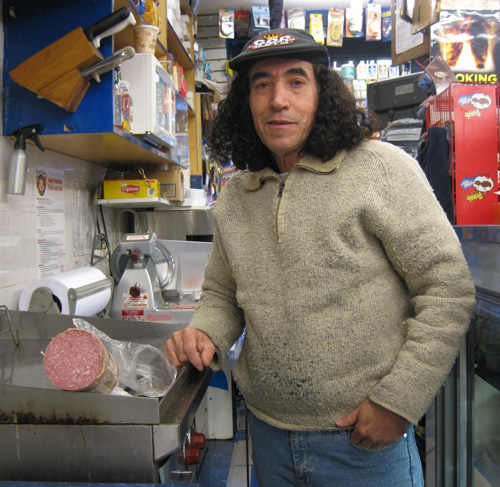 Photo by Nancy A. Ruhling
Amaro feels most at home behind the deli counter.

Want a turkey sandwich? Amaro will slice the Boar’s Head bird and add the mustard and mayo. Need a steaming cup of java to pop open your eyes? Amaro will pour it for you then serve it was a smile. Dropping in to pick up an extension cord and a paintbrush? You can count on Amaro to shoot the breeze.

“I take care of the store like it’s my own,” he says. “I like to make it the best store in the neighborhood.”

For nine years, Amaro has been a fixture at the deli, working Mondays through Saturdays from 7 a.m. until 4 p.m., when his replacement arrives to carry on until the wee hours. He manages the store and one assistant and does everything from stocking the shelves to ordering the lunchmeat. (Why does he put the individually wrapped rolls of Scott toilet paper on top of the ATM? Is it coincidence, or is he making a subtle comment about throwing money down the toilet?)

Amaro, a native of Rio de Janeiro, Brazil, started his career as an electronics engineer for a railroad, but somewhere along the way, he switched tracks and ended up owning a restaurant/nightclub on Copacabana Beach. “I made a lot of American friends,” he says, “and I heard you could make a lot of money in New York.”

In 1988, he sold his business and decided to join his sister in New York. “I was only going to stay for six months,” he says and laughs.

He took a job driving a taxi at an Astoria-based company owned by Brazilians. It was hard work yet he stuck it out for four years. He traded it for a job in an Astoria deli, where he could stay put during his work shift. Nearly a decade ago, he landed at the Ditmars Deli. It was the short commute that enticed him — he lives right next door.

“I’ve made a lot of friends here,” the senior counterman/manager says. “And there are several Brazilian families in the neighborhood.”

For Amaro, the transition to American life wasn’t easy or swift. Although he had studied British English in school, he didn’t get much opportunity to speak it.

“The taxi company was Brazilian, and everyone spoke Portuguese,” he says. “And I worked a lot of hours, mostly at night, so I didn’t get much time to speak or study American English.”

So he taught himself, picking up words here and there until he could string together sentences like pearl necklaces. He’s learned enough to communicate with customers who ask for a quart of milk.

On Sundays, his only days off, Amaro devotes his time to the Lord. He attends a morning service at a different church each week then sits in the pew for evening services, in Portuguese, at Astoria Foursquare Church, an evangelical institution.

“God is very important in my life,” Amaro says, adjusting his black cap, which says “God has been good 2 me.” “I used to live like everybody else, but in 1990, I changed my life. I started reading the Bible, and I saw that God is more important than anything else.”

Being a counterman in a deli may be a humble job, but Amaro has made it a holy profession. “I live for God, and I work for God.”

It’s nearly 4 p.m. The school kids have gotten their candy and chips and are heading home. It’s time for Amaro to relinquish his counter. 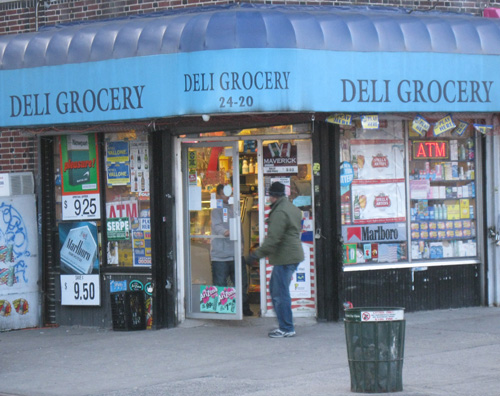 Photo by Nancy A. Ruhling
Amaro and the deli are neighborhood institutions.

He puts a jacket on over his sweater. It’s warm in Rio, he reminds himself.

“The wintertime is getting to me,” he says, shivering. “I haven’t been back to Brazil since I came to America twenty years ago. But when I do go back — someday, maybe someday soon — I’ll live there. And then I’ll come back to Astoria. To visit.”

But tomorrow, at 7 a.m., he’ll be right where we expect him. Behind the deli counter.