Crooning “Sta Dosa Ola,” Antonis Armeftis, true to the title of the Greek pop tune, gives his customers everything — a menu and an invitation to his next show.

His service with a smile and a serenade turns more than a few heads at Michael’s Restaurant.

“You have a beautiful voice!” a woman of a certain age gushes as he hits the chorus of “I Gave You Everything.” “Is the entertainment free?”

Antonis gives her a Broadway-wide grin and a wink. “I’ll put it on the check,” he says, laughing all the way to the kitchen. 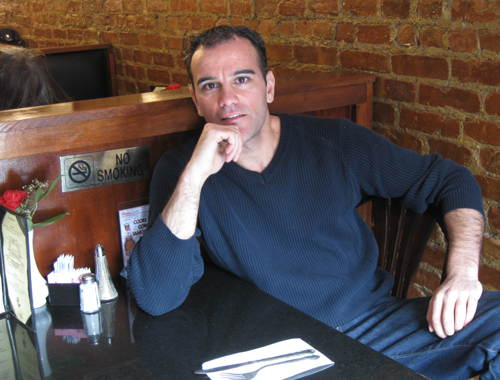 Photo by Nancy A. Ruhling
Antonis is always on stage at Michael’s.

Antonis is an actor, so all his world’s a stage. For a decade, he’s been working at Michael’s, where he “plays” a waiter. His other steady role is in Greek theater, where, as one of the more prominent and popular actors, he has had leading roles in productions by the Greek Cultural Center, the Hellenic Cultural Center, American Thymele Theatre, Hellenic Theater Workshop, The Mastic Theater and Cypriot troupes.

“Greek theater — I love it because it’s in my own language,” says Antonis, who is so startlingly handsome that he looks as though he’s made for the big screen. “And I love acting because it gives me a chance to play different people. I love the challenge.”

If you’re not a regular at Michael’s and Antonis’ face looks familiar, it’s probably because he’s had bit roles in a number of films, including The Devil Wears Prada, Maid in Manhattan and How To Lose a Guy in 10 Days. He also has appeared in several TV shows, notably Law & Order. And he was a featured guest on Ebru TV’s A Taste From the Melting Pot. 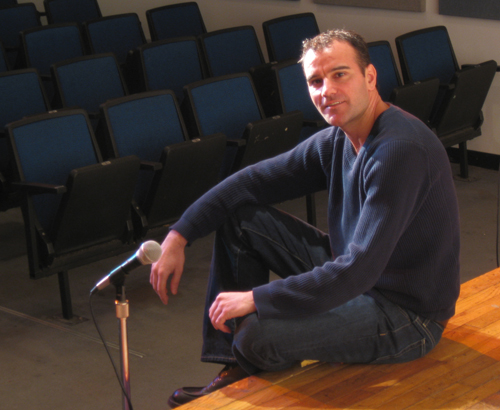 Photo by Nancy A. Ruhling
Antonis the waiter is waiting for the right audience.

Antonis, who grew up in Simou Paphos, what he calls “the smallest village in Cyprus you can imagine,” comes from a big, boisterous family. “Think of My Big Fat Greek Wedding,” he says. “I still call my mother every other day.”

He and his four siblings had a placid childhood — “everybody in the village knows everybody else, and everyone owns land, goats and sheep.”

After high school, he did his mandatory 26-month tour of duty in the army. “I had a post on top of a mountain with five other soldiers,” he says. “Our mountain was Greek; the one right next to it was Turkish. There was a river in between and only one road to get there. I once went for 84 days without seeing my parents. It was the longest time I had ever been away from them.”

Although Antonis had a burning desire to be an actor, he kept it a secret. “I was scared to tell my parents,” he says.

So he took a job as a waiter in a hotel. He waited one year then came to New York, where his sister was studying and his uncle was working for the Greek Cypriot Embassy. It was an acting course at LaGuardia Community College that left him stage-struck. “The teacher told me, ‘If you want to continue, you’re good at it.’ That day, I called my parents, and they said they would pay for me to go to acting school.”

He studied in Manhattan at the Neighborhood Playhouse School of the Theatre and at HB Studio. He took his first waiter job in Astoria and began picking up roles in Astoria’s Greek theaters.

A decade ago, he became a fixture at Michael’s, a neighborhood eatery where his theatrics are applauded. “I like singing to the customers and making them feel good. It comes from here,” he says, touching his heart.

Many of the regulars make it a point to come in when Antonis is on duty. In between courses, when he’s cramming to learn a part, he often tries his lines out on them. On his days off, he and his acting pals rehearse in the front booth by the window.

“When I do Sunday matinees, I have to run out the door and run to the theater,” he says. “I only have 20 minutes to change, and then I walk on stage.”

As much as he loves Greek theater — he also does fund-raising for the Greek Cultural Center — he is giving it up. “I want to do more American mainstream films, TV shows and commercials,” he says.

Antonis is a long way from home; his eyes get misty when he talks about how much he misses everyone. Ah, but his co-workers and his customers have become his second family.

“My boss comes to my shows, and he lets me rearrange my schedule to make rehearsals,” he says. “He treats me like a son. Sometimes I overdo the acting and singing, but my co-workers never say anything. And many of my customers, even some who don’t speak Greek, come to my shows to cheer me on.”

Surely that is because of Antonis’ big heart and little acts of kindness. One steady customer has arthritis so severe that she can’t cut her food or butter her bread; Antonis takes up knife and fork for her. And there’s the elderly woman who lives all alone. Antonis worries about her and gives her his cell number, telling her never to hesitate to call for even the smallest thing.

Antonis’ future isn’t scripted yet, but for now his Michael’s role is still in the picture. 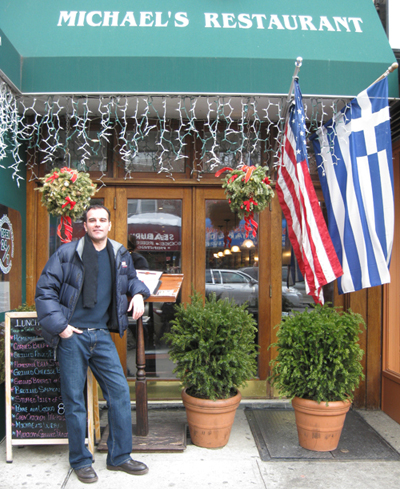 Photo by Nancy A. Ruhling
Wherever Antonis goes, Michael’s will be with him.

“I love my job, and I hate my job,” he says. “It’s a pleasant way to pay the bills, but it takes too much time away from my acting.”

Someone calls for the check. That’s his cue. Resigned, he reprises his role as waiter while he waits for his big break. At Michael’s, he’ll always be a star.