The diamond engagement ring doesn’t come off Ronnie Hartley‘s finger easily. For nearly 46 years, she’s worn it, ever since Roger, her dear and dearly departed, gave it to her.

He had been betrothed to another; that’s why he had the ring handy.

“I only knew him a month, and we’d only gone out on one date when I proposed to him,” says Ronnie. “The ring fit me perfectly. He wanted to change the setting because it was for the other woman, but I said, ‘The ring doesn’t make the man. I’m marrying the man, not the ring.'” 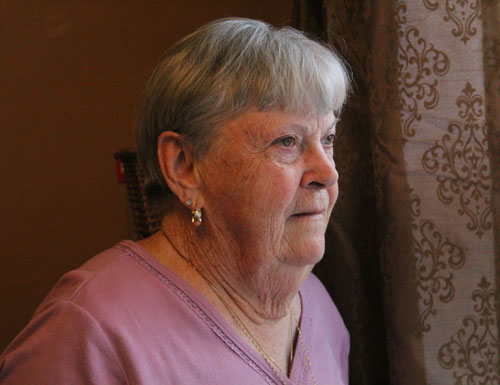 Photo by Nancy A. Ruhling
Ronnie came to America a half century ago to be a nanny.

Of course, she’d give up the ring in a second if it would bring the man back. Roger has been gone for 29 years, and Ronnie’s still crying.

“He was my everything,” she says, wiping a tear from the corner of her eye before it can caress the creases in her face.

There’s no Kleenex in the living room, so Ronnie, practical to a fault, grabs a pile of paper napkins off the TV tray and crushes it in her hand like a vise.

“I’m very emotional about this,” she says. “It happened suddenly. He was only 43.” 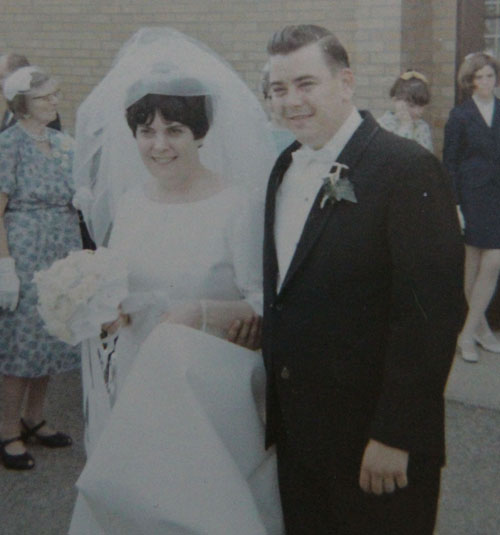 Photo by Nancy A. Ruhling
Ronnie and Roger at their 1968 wedding.

They lived in this same two-family house, the one that had belonged to Roger’s grandmother, the one he drove her back to to get the ring that made her his wife and the one Ronnie shares with her daughter and granddaughter.

Ronnie, who was christened Veronica, grew up in the hand of hardship. She’s a hardy lass from Glasgow, Scotland, who was raised in a two-room tenement. The typical Manhattan studio is a mansion by comparison. She slept on a pull-out bed in the kitchen.

Her two brothers were much older, so she was virtually raised as an only child. Although she loved school, she quit at 15 and took a factory job to help her mother, who scrubbed floors, pay the bills. To be sure, her father was a hard-working man, but at night, he was known to raise a pint and lower his paycheck perilously. And Ronnie was the one always sent to fetch him from the pub. 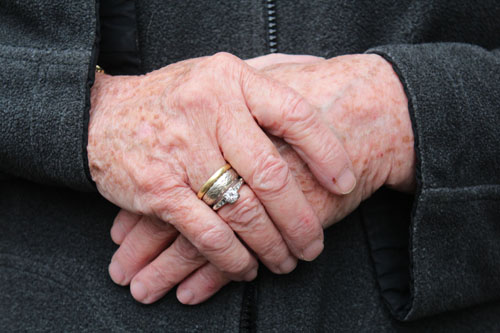 Photo by Nancy A. Ruhling
Ronnie and her engagement ring have never been parted.

After seven years, she got tired of making men’s suits and answered a newspaper ad for a job as a nanny in America.

“I wanted to see another part of the world,” she says. “I didn’t get that position. The interviewer pinched my cheek and told me I would have to change my accent to American for the children. I said I couldn’t do it.” 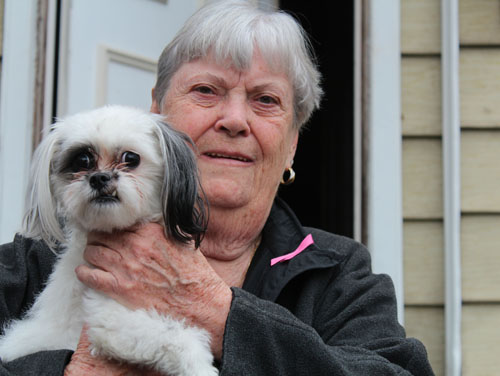 Photo by Nancy A. Ruhling
Ronnie and Shea.

“It was the first time I had been on a plane or had ever been any place by myself,” she says. “I was nervous and scared because I had never worked for a family, and they were rich. They had a 12-room house.”

For three years, Ronnie cooked, cleaned and raised the boys. She started at 7 a.m. and didn’t finish until they were resting comfortably in their beds. On Sundays, she went Irish dancing, and when she was off every other Thursday, she went window shopping in Manhattan. 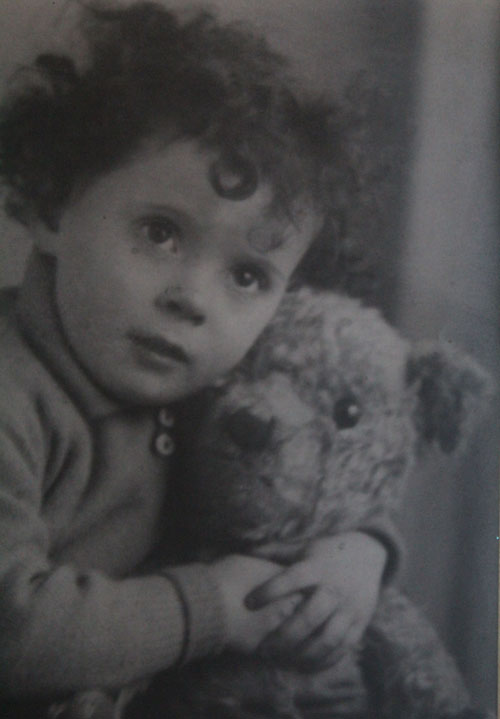 Photo by Nancy A. Ruhling
Ronnie when she was about 3.

But $33 a week wasn’t enough to buy any of the pretty things she saw or even to support herself. When she finally got it in her head to ask for a $7-a-week raise, she was refused. The slight still stings, and she remembers the boys weeping on the front steps when she said good-bye. They still keep in touch.

Crying makes her think of Roger again. The 15 1/2 years with him were glorious.

“He was the love of my life,” she says, dabbing her eyes with the napkins.

She’ll never forget his last call from the hospital. The next morning, before she could even bring him his bagel and coffee, he was gone. She never did get to say a proper farewell. 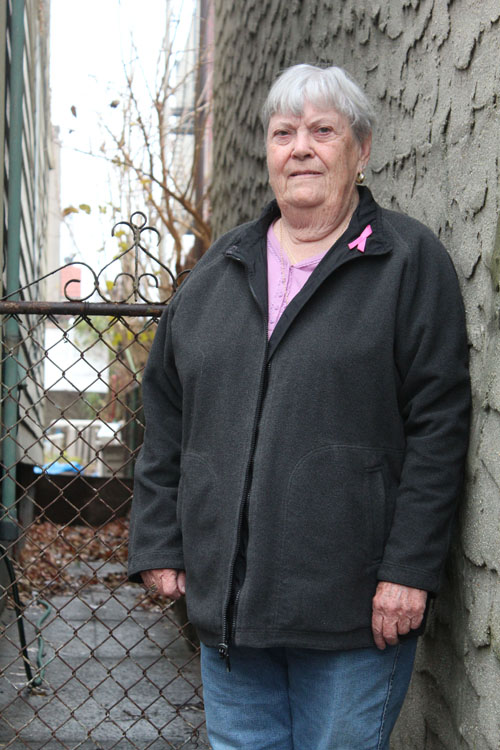 Photo by Nancy A. Ruhling
Ronnie misses Roger every day.

Unlike many young widows, Ronnie wasn’t in dire straits. She only has a son and a daughter. Her three other pregnancies ended in miscarriages.

It was the loneliness that nearly killed her.

“I never remarried,” she says. “I never had a boyfriend. I was strictly a mommy.”

She’d always been involved in her children’s schools, and what with Roger gone she decided to become a substitute school aide, working for P.S. 150 in Sunnyside for 18 years before retiring at 62.

But nothing was the same, or will ever be the same, for Ronnie without Roger. She had breast cancer two years ago; she almost forgot to mention it. She endured chemo, a mastectomy and radiation. The treatments thinned and straightened her girlish curls, but the important thing is that she made it through. She considers herself lucky to be celebrating her 72nd birthday. 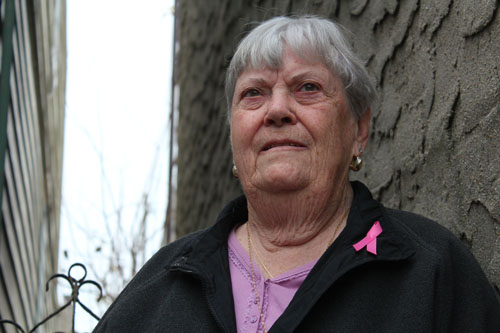 Photo by Nancy A. Ruhling
Ronnie will mourn Roger forever.

These days, Ronnie is content to babysit her 9-year-old granddaughter and play grandma to Shea, a perky 2-year-old poodle, Bichon Frise and Shih Tzu mix who has the run of the house. She also volunteers at her granddaughter’s school, P.S. 85.

And she makes trips to Maple Grove, the cemetery in Kew Gardens where Roger was buried all those years ago when she — and he — were holding the bright, promising world in their hands.

“I wouldn’t change a thing about my life,” Ronnie says.

That’s not true. She’d put Roger back in it.

She reaches for another napkin. Shea scampers to the kitchen.