Judy Lopez sits on the couch sipping a soda. Her husband, Ricky, settles into the recliner with Dixie, a bug-eyed pug, riding shotgun on its ample arm.

It doesn’t get better than this. The trio is content to tune in to the flat-screen TV.

Ricky, a tall, dark man with ocean-deep eyes, and Judy, pretty in a practical page-boy, got married late in life. He was 39, and she was 42 when they became man and wife a decade ago. They added Dixie to their family a year after their wedding. 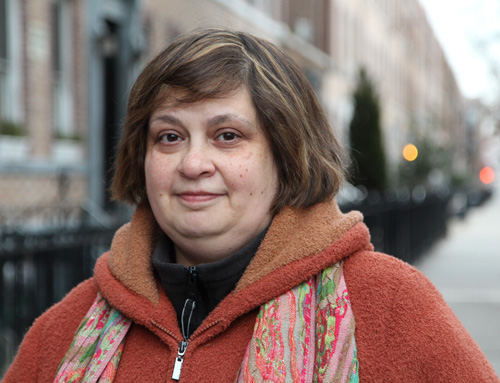 Ricky, a native of Brooklyn whose people come from Puerto Rico, had spent his life roaming. Judy, who was born in Astoria, had mostly marched in place. But when they met, Ricky says, “we just clicked,” and everything fell into place for them to fall in love.

It happened like this. Ricky’s family was fractured by an early divorce that sliced it in two. Ricky and his older sister were raised by their father; their siblings — two brothers and a sister — lived with their mother.

“We moved around a lot,” Ricky says as Dixie snoozes. “Each time, I lost all my friends and started over. But I got adjusted.” 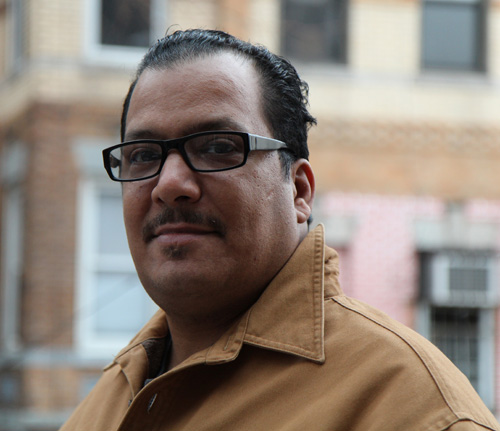 Photo by Nancy A. Ruhling
Ricky spent most of his life on the move.

Judy, too, had been bounced around a bit in her childhood, but ever since she got her first job, she’s stayed in Astoria.

After high school graduation, Ricky enrolled in Job Corps, a free training program. When his girlfriend got pregnant, he married her and moved to Florida.

“I do regret that marriage,” he says. “But I don’t regret having my son. What can I say? Love is blind, and I was young and stupid.”

Needless to say, their love didn’t last as long as a snowflake in a forest fire, and less than a year later, Ricky was a free man who had what he calls “an Army brat mentality — I wanted to be on the move.” 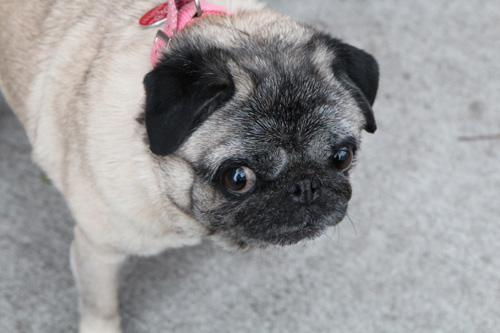 Photo by Nancy A. Ruhling
Judy and Ricky and Dixie make three.

His first pit stop was Texas. After spending some time in a homeless shelter, he got back on his feet and got the job of his dreams. He became the foreman of a traveling carnival that brought its “step-right-up” games of fun and fortune to city after city in the Midwest. In the beginning, he lived in hotels. When his boss gave him a pickup truck, he hitched a trailer to it and made that his mobile home.

“I don’t know how many places I’ve been,” he says.

When that great gig ended after eight years, he returned to Texas, eventually getting a job in the PepsiCo factory warehouse. A decade later, he found himself scooping 50 flavors of ice cream at a Häagen-Dazs in New York City.

“How did I get back to Manhattan? I took the bus!” Ricky says and roars. 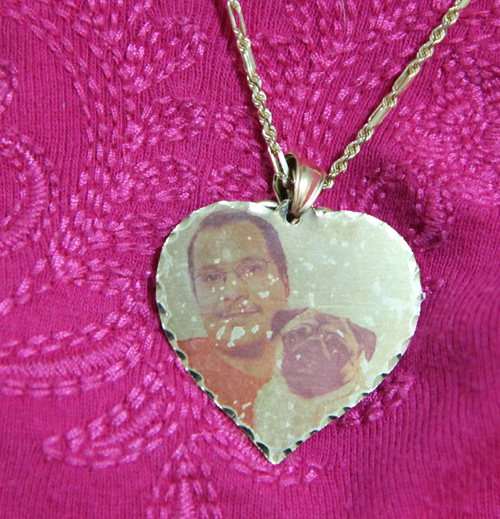 Photo by Nancy A. Ruhling
Judy keeps Ricky and Dixie close to her heart.

Soon, he was working as a salesperson in the Long Island City Best Buy store.

Meanwhile, Judy was pursuing her career. She had a year of business school under her belt and had her heart set on being a court reporter like her father, but the school she intended to attend closed.

Her first real job was as a secretary for a Manhattan accounting firm. She still has that title but for a different company.

By the time Ricky was working at Best Buy, Judy’s mother had died and her father, who had had a stroke, and her brother were living with her. They were sharing a one-bedroom apartment with four dogs. 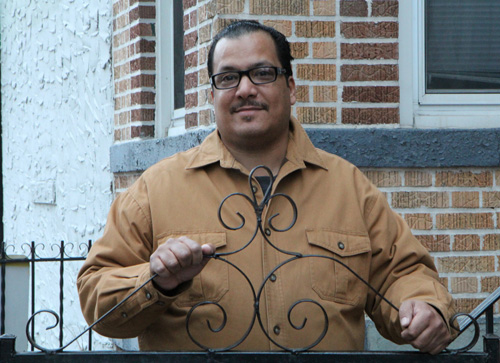 Photo by Nancy A. Ruhling
Ricky wasn’t eager to marry …

“I’d never been married,” she says, “and I was tired of being alone.”

It was a personal ad that Judy posted on AOL that brought Ricky into her life.

“He was funny and had a good heart, and I felt so comfortable on our first date that I knew we would get married,” she says.

Ricky didn’t figure out he loved this “very caring” woman until the third or fourth date. Even then, he didn’t pop the question because he was “leery” of marrying again. 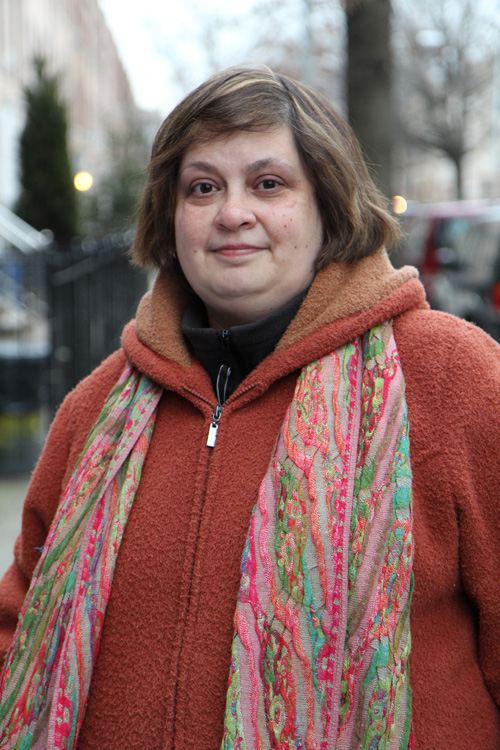 Photo by Nancy A. Ruhling
… so Judy popped the question.

But Judy did. Instead of saying yes, Ricky agreed to agree to discuss the issue in six months. But after only three months, they moved in together. Working with accountants, Judy learned the value of meeting deadlines, and she had no intention of letting Ricky’s pass. Exactly a half-year later, she asked Ricky again.

It was Ricky’s idea to get Dixie. In the beginning, they put her in shows, but she preferred playing to prancing, so they gave it up.

Ricky, too, went through some changes. A back and knee injury have kept him from working, and five years ago, he became a stay-at-home husband. For a while, he became Mr. Grandpa, babysitting his son’s little boy and girl. Now, he sells candles and does data entry from home for the firm Judy works for. He takes care of the apartment, too. All in all, it’s enough to keep him busy. 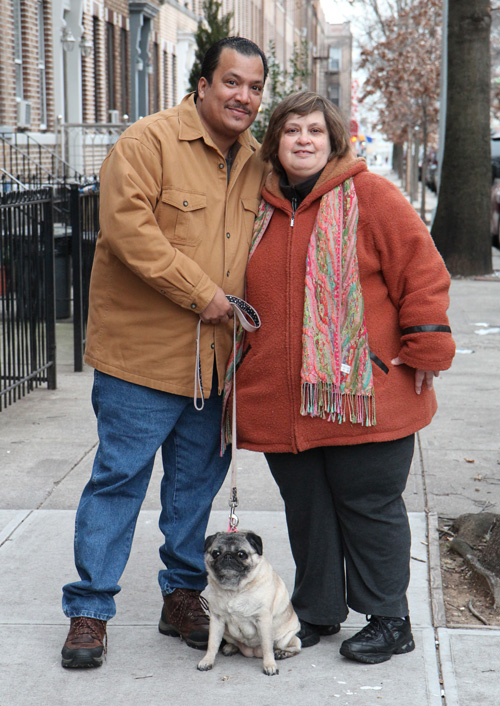 Photo by Nancy A. Ruhling
Ricky and Judy (and Dixie) are happy to be together.

They find their joy in each other. Their time together is precious, all the more so because although Ricky did manage to track down his mother when he was a pre-teen and does see her occasionally, he’s never been close with her.

“Being with Judy is like I have a twin — we know what we’re thinking and can finish each other’s sentences,” he says.

Judy says that they are so in sync that Ricky often tells her to “get out of my head.”

Someday, perhaps a decade or so from now when Judy retires, they’d like to move to Florida to be closer to Ricky’s son and the grandchildren. They keep their photos plastered on the refrigerator next to Dixie’s.

“Whatever we do,” Ricky says, “there’s never a dull moment.”